It could be all change at Crystal Palace this summer.

Aaron Wan-Bissaka is close to finalising a move to Manchester United, if reports are to be believed, rumours suggest Christian Benteke could be playing his football elsewhere next season while Wilfried Zaha continues to be linked with a move away from Selhurst Park.

Arsenal are long-term admirers of the unpredictable winger and Borussia Dortmund have been previously linked as a potential destination for the 26-year-old. Palace are keen to keep him, understandably so, but player power is what ultimately rules football these days.

Zaha has already said he wants to play Champions League football. If he hands in a transfer request and kicks up a fuss then that £80million valuation placed on him by the club is likely to drop.

According to the Daily Mail, Palace have a contingency plan in place if they do lose the Ivory Coast international: Allan Saint-Maximin.

Finding an alternative to a player who often channels Roy of the Rovers with his exploits on the pitch isn't ever going to be easy. But Saint-Maximin fits the bill perfectly.

The scouting team at Palace had a clear profile in mind when they started the search for Zaha's successor. If the report is true, the Eagles are looking to replace their No.11 as a creator and not as a goalscorer.

They need a player who deals in moments. An individual who is comfortable creating something out of nothing. Saint-Maximin ticks that box. 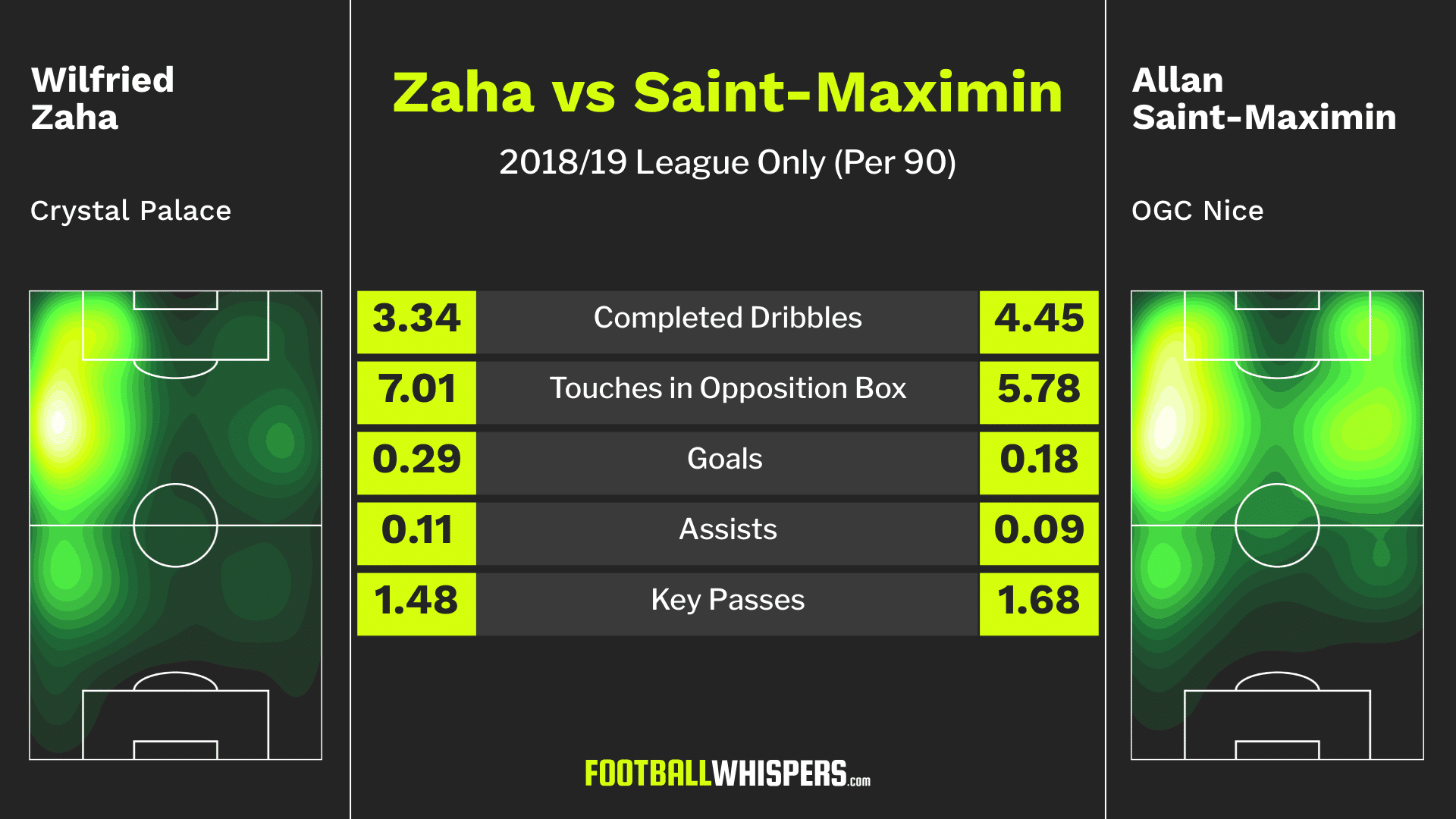 He's one of the few players in Europe who've managed to complete more dribbles than Zaha on a per 90 minute basis, as shown in the graphic above. And that is despite attempting fewer, 6.63 to the Palace forward's 7.76.

Under Hodgson, the Eagles rely on moments of individual brilliance in the final third to create opportunities. It's why Zaha and Andros Townsend are so effective. Saint-Maximin, in many ways, is similar. His ability to beat players crates space and opposition sides go from being in control to being stretched in a matter of seconds.

The Nice forward didn't average as many touches in the 18-yard box as Zaha but 5.78 is still a high average for someone operating in a wide area. He didn't win as many penalties as the ex-United man (6) but he still danced his way to three fouls in the area.

Saint-Maximin doesn't score as many goals as Zaha, six to ten, but the ability is there, he just needs to mature a little when in dangerous positions. He averaged slightly more shots (2.56 to 2.34) but only managed to get 25 per cent of them on target, considerably fewer than Zaha's 37 per cent.

In terms of expected goals per 90, Saint-Maximin pipped Palace's poster boy 0.20 to 0.18. It highlights that he's getting into dangerous areas just as often as Zaha.

The assists will come, too. Last season, his expected assists average was 0.18, the same as Zaha's. However, the poor finishing of teammates saw him register just 0.09 per 90. He played more key passes than his Palace counter-part despite attempting fewer passes in general.

If Zaha left, Palace would be losing a player many believe to be the finished product and ready for Champions League football. If they signed Saint-Maximin, they'd be replacing him with a raw talent, but one with the potential to be even better than their academy graduate.

The rumoured fee of £25million could prove to be a potential bargain in the current market. And if he continues his development as expected clubs will be queuing up to pay double that in a season or two.