There's a feeling of Déjà vu in the Premier League right now with many top teams battling it out for the signature of Wilfried Zaha.

The Crystal Palace attacker is in the form of his life and recent reports have linked Manchester City, Chelsea and Arsenal with a January move.

Arsène Wenger, report the Daily Star, has picked out the forward as the man to replace Alexis Sanchez when he leaves the Emirates Stadium.

Zaha linked with a move to a top six club is not a new development, we've been here before, in 2013 to be exact.

Five years ago he was touted as the next big thing and his form for Crystal Palace, then in the Championship, convinced Manchester United to part with a reported £10million to secure the services of the 20-year-old. The Red Devils loaned Zaha back to Palace for the remainder of the season.

He arrived at Old Trafford ahead of the 2013/14 campaign and made his debut for the club in the Charity Shield. However, new United manager David Moyes wasn't completely sold on the winger and he made just two starts in the Premier League before a loan move to Cardiff City.

The Eagles then brought Zaha back to Selhurst Park, initially on loan in the summer of 2014 before signing him on a permanent basis for a fee in the region of £6million.

It appeared as though his big break had come to a premature end. But he's improved season upon season and has matured into the player many hoped he would become. And it's led to teams vying for Champions League football showing an interest in him.

He was a one-time Liverpool transfer target while Tottenham Hotspur have regularly been linked with the Ivorian over the past 18 months. Chelsea, too, are supposedly tracking him.

Why teams are taking note of Zaha

It's not often you see clubs near the top of the table, with the money they have at their disposal, battling it out for a player starring for a team who until recently sat bottom of the Premier League.

Palace are 16th now but the threat of relegation remains. The recent 3-0 win over Leicester City, combined with results going their way, helped them climb the table.

In the past Zaha has been accused of lacking an end product but this season has seen him improve in that respect.

Palace manager Roy Hodgson was forced to use him centrally due to an injury to Christian Benteke and, on paper, it appeared to be a bizarre move.

Zaha was at his best when he was able to isolate opposition defenders and drive into the penalty area. He'd terrorise full-backs on the left of the Palace attack before cutting in onto his stronger right foot. There was a thought that playing him centrally could see him struggle.

If anything, though, it's helped his stock rise and it's shown a side to his game that many hadn't seen before. He's heavily involved in everything good about Palace and at times it even appears as though he's singlehandedly keeping the Eagles in the top flight.

Interested clubs now know he can play centrally as well as on either flank, adding another string to his bow. 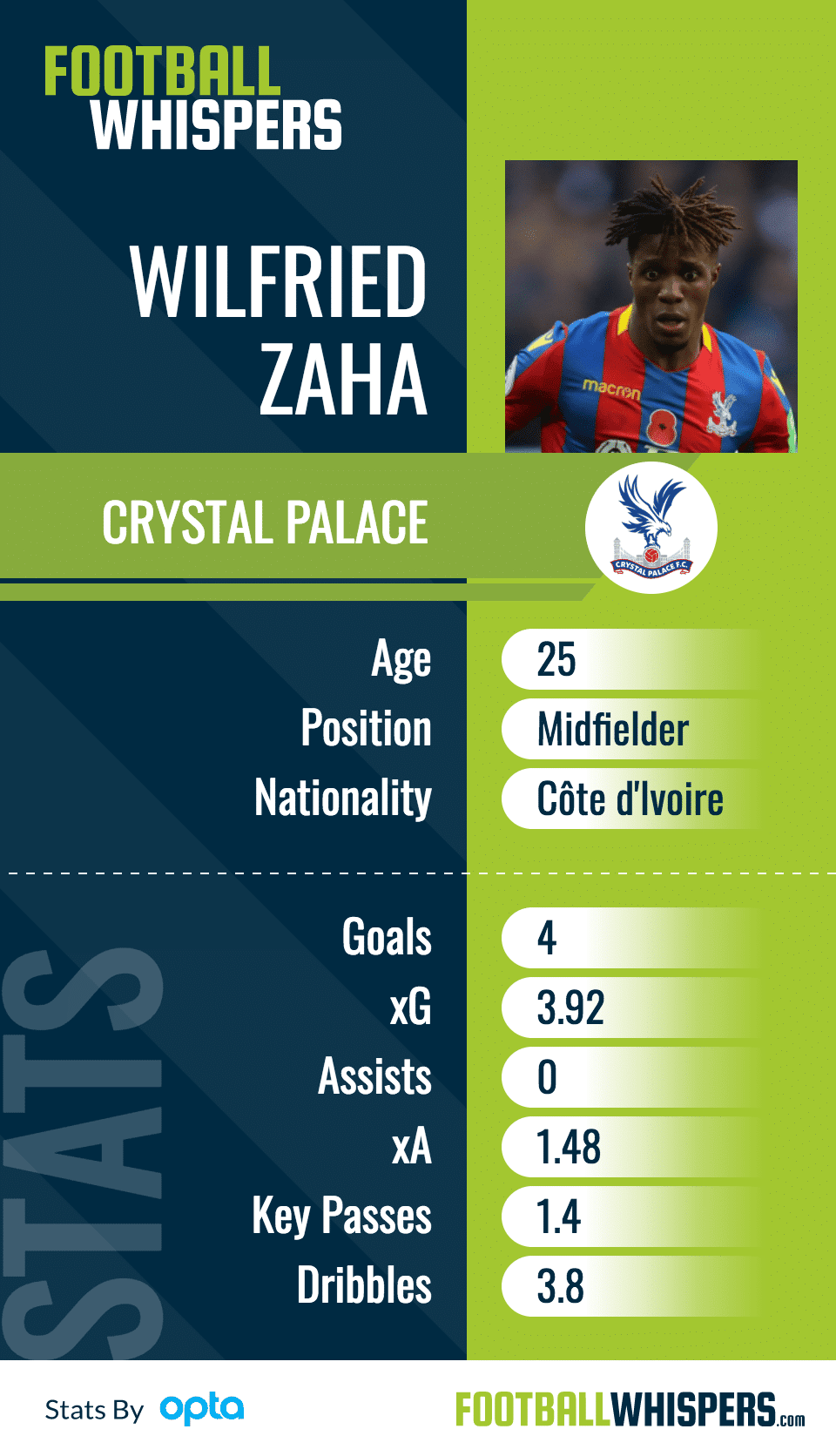 He may have only scored four goals this term which is by no means prolific but he's still on course to have his most productive season in front of goal. His current best is the seven he managed during the previous campaign.

Only Eden Hazard completes more dribbles than Zaha does in the Premier League – so of the players who can help relive pressure and take opponents out of the game, the Crystal Palace man is one of the best in England.

Jamie Redknapp recently claimed in his Daily Mail column the attacker was the best player outside of the top six: “They (Palace) are now unbeaten in seven, keeping clean sheets in three of those games. Even when they were rock bottom I maintained their squad was too talented to go down – particularly with Wilfried Zaha fit and firing

“Some of the things Zaha was doing on the ball at Leicester were unbelievable. He is the best player outside the big six clubs and it is vital Hodgson keeps hold of him next month.”

Where would Zaha flourish?

It very much depends on how Zaha views himself as a player.  If this stint as a striker has opened his eyes to the possibility of playing there in the long-term then it's unlikely he'll get the opportunity to do that at any of the clubs he's been linked with.

Though having said that, Man City have started to use Raheem Sterling as a false 9 of sorts recently, so there's no reason Pep Guardiola couldn't work with the Crystal Palace No.11 to get him up to speed with the demands he places on his forward players.

However, if sustained match-time is what he's after, then it won't come at the Etihad. Ultimately, Sterling, Gabriel Jesus and Sergio Agüero would all ahead of Zaha in the pecking order.

But if he was happy to play as a wide forward, then he'd thrive at City. Sterling and Leroy Sané are both managing to boost their goal-tally by playing in that role under Guardiola and Zaha has a similar profile to the pair. He's direct, aggressive and he gets into good areas inside of the penalty area.

The Gunners need to replace Alexis Sánchez with the Chilean free to leave in the summer. They've recently been linked with Leon Bailey and Thomas Lemar as well as Zaha.

Of the trio they've been linked with, it's the Palace man who shares the most similarities with the Manchester City transfer target.

Sánchez excelled leading the line last season but has been relegated to a supporting cast role on the left of the attack since the arrival of Alexandre Lacazette. However, with Arsenal using wing-backs it often sees the Chilean international taking up areas centrally.

Zaha would have to improve his goalscoring figures if he was to properly replace Sánchez, but stylistically he's a fit.

Like Arsenal, Chelsea have been linked with Bailey, Lemar and Zaha over recent weeks with reports suggesting Antonio Conte will let Willian leave during the winter window.

The Daily Mail claimed Conte wanted to use Lemar as a left wing-back which may be a sign of things to come for Zaha if he signed for the Stamford Bridge outfit.

They're not identical in terms of style, with Zaha being right footed and Lemar having a wand of a left foot, but Conte clearly wants more attacking intent from his wing-backs and could be tempted into using the 25-year-old in that role.

It's one of the reasons Alex Oxlade-Chamberlain rejected a move to Chelsea and could be why Zaha does the same.

However, with Eden Hazard continuously linked with a switch to Real Madrid, could Zaha be the man to replace the Belgian playmaker in the future?

Why Crystal Palace must do everything they can to keep Zaha

Hodgson's men are in a relegation fight whether they like it or not and selling their best player in the middle of the season makes no sense – a bid in the region of £50million shouldn't even make them blink.

Zaha is a difference maker, a match winner and a game changer. What's £50million in the bank if you're plying your trade in the Championship next season?

Zaha only signed a new five-year deal with the club in May to ward off Spurs so there's no reason for the club to sell him in January. And the player doesn't appear the sort to force through a move when he's happy where he is.

It will be fascinating to see how it plays out during the winer window. Can Palace really keep hold of their ace in pack if the big boys come knocking?