With ten minutes to go, losing 2-1 to Toulouse, the team in purple were set to go five points clear of Les Dogues and leave Christoph Galtier's team languishing in 19th place.

Also feeling the pressure of a crucial six-pointer, Mickaël Debève’s side sat back too deep at the Stadium de Toulouse, inviting the away side to up the tempo, much to the despair of the home crowd.

Alban Lafont, the 19-year-old goalkeeper, was pulling out save after save, showing why he’s been an Arsenal transfer target.

Then, Lille were awarded a free-kick, 25 yards from goal.

Still only 21 years old, this is the Mali international’s second full season in Ligue 1.

Last term he made 23 appearances, scored once and proved an exciting prospect in a side that had struggled under a number of different coaches.

Once Marcelo Bielsa joined the club as the new manager, many believed the Argentine would guide the youngster to the next level, similar to what he did with Benjamin Mendy and Giannelli Imbula during his time at Marseille.

However, in true ‘El Loco’ fashion, he featured at right-back, right-midfield, and only twice in his natural central midfield role.

Once Galtier was appointed as the new full-time coach, Bissouma struggled to find a place in the team. The former St Etienne boss chopped and changed, looking for the right combination of Bielsa’s misfits to guide Lille out of the relegation battle.

Going into their week 33 fixture at home to Guingamp, the 21-year-old hadn’t played 90 minutes once. Injuries and rumoured attitude problems kept him out of the team and many fans wondered if he’d ever fulfil the obvious potential they all believed him to possess.

His rejuvenation started in April against Guingamp. Finishing the game with six completed dribbles and four interceptions, his energy and drive in midfield was crucial in taking a 2-0 lead.

It could have been a huge win, if they hadn’t blown the lead in injury time and finished with just a point.

Even 4-0 down away to Marseille, his tackle and forward pass to Yassine Benzia helped Lille score a consolation goal.

The performances were starting to come, but the side from northern France needed points, hope and belief.

A huge display against Metz at home was capped off when he finished a superb second-half move to seal a 3-1 win; he was head and shoulders above anyone else on the pitch.

Since he broke through into the first team, Lille have signed players like Thiago Maia and Thiago Mendes, the next Brazilian superstars. When Les Dogues were looking for a hero, it was Bissouma, not the high-profile signings who came calling.

Back to the La Ville Rose in the weekend just gone, the Malian, miles out, with the odds against him, fancied his chances. He was right.

Smashed with his right foot, the midfielder couldn’t have hit the ball any sweeter and all the future France No.1 could do was watch it fly beyond his out-stretched arms and ripple the net.

“I would have preferred a cross,” smiled Nicolas Pepe after the game. “I did not want Yves to shoot, but I saw the determination in his eyes and let him do it. This is not the worst decision made by a Lille player this season.”

Back in the game, Lille could smell blood and Toulouse were stunned. They had no answer when two minutes later Pepe beat the offside trap and rounded Lafont to notch his 13th goal of the season to put his team ahead.

A two-goal swing had catastrophic consequences for the home side, Lille jumped to 16th and Le Téfécé fell down into the relegation play-off place.

For two games in a row, Bissouma stepped up and pushed his team forward, leading them to safety.

Ranking central midfielders in Ligue 1, only Lyon’s Tanguy Ndombele completes more successful take-ons and he’s been one of the most impressive performers for OL this term.

Using Football Whispers' unique Player Persona model, you can see what he brings to the table. 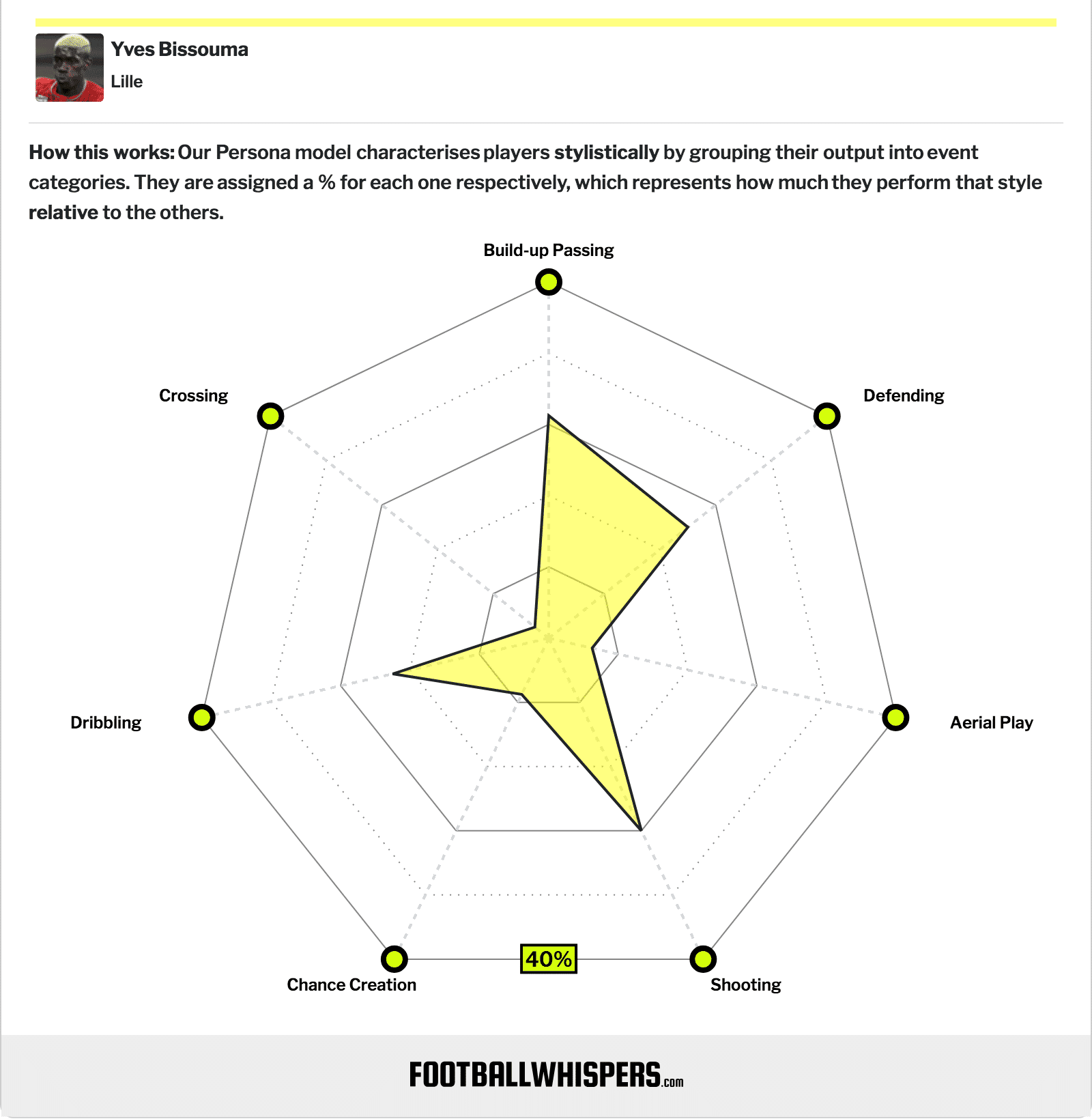 He’s an all-rounder, a player who can press high, win the ball and then push the right pass and help both create and take chances.

Able to shoot from long range, he’s not shy to try his luck, as his free-kick showed. Full of energy and determination, he’s the perfect blend of everything you’d want in a team who need to push the tempo.

Given more time to blossom and learn from his own mistakes, there is little doubt he’ll begin to create more opportunities in the final third.

Lille’s fate hangs in the balance, and even if they survive the drop by virtue of their place in the table, they have the threat of a forced relegation hanging over them.

Banned from signing new players in the January window, the DNCG threaten to drop them down regardless if they can’t find substantial funds this summer. Around €100million has been rumoured, but nothing is set in stone.

Ibrahim Amadou, close to joining Crystal Palace in the winter, will likely leave, Adama Soumaoro, Mendes, Maia and others will be first on the chopping block.

A strong end to the current campaign and Bissouma will jump high up clubs most-wanted list and there’s nothing Les Dogues could do to stop it from happening.