In December 2017, France Football named Youri Tielemans as one of Ligue 1's biggest flops for the first half of the 2017/18 season.

A year later, though, while Monaco slipped into crisis during Thierry Henry's ill-fated spell in charge, the midfielder's reputation had been transformed.

A peripheral figure during Belgium's run to third place at last summer's World Cup, Tielemans was one of the few bright sparks during a grim opening to the 2018/19 season which saw Monaco sucked into a scrap to avoid relegation, scoring five times in 20 appearances.

In January, Tielemans was offered the chance to escape a difficult 18 months in the principality by Leicester City.

Then under former Monaco player and manager, Claude Puel, the playmaker instantly settled into his new surroundings at the King Power Stadium, continuing his fine form under Brendan Rodgers to end the season with three goals and four assists in 13 appearances.

Rodgers, who has been impressed by the 22-year-old's maturity, is understandably keen to land his services permanently. However, speaking while on international duty with Belgium, Tielemans admitted that ‘big clubs' have approached his agent.

“The chance that I’m returning to Monaco is very slim,” he said via journalist Kristof Terreur. A lot of big clubs have been in touch with my agent – Leicester is one of them.” As per Terreur, Manchester United have enquired, while the player admitted to having spoken to Manchester City manager Pep Guardiola, but insisting it was ‘nothing special'.

According to Sky Sports, Arsenal and Tottenham Hotspur are also admirers of the former Anderlecht man. So, with speculation over Tielemans' future intensifying, we analyse his possible destinations for the 2019/20 season.

Tielemans became a fan-favourite at the King Power, shining alongside the likes of James Maddison and Jamie Vardy under Rodgers.

After a reasonable showing in his first two games, he notched his first assist in the win over Brighton when he teed up Demarai Gray with a delightful through ball. He followed that with another assist, this time for Jamie Vardy, against Watford before netting his first goal in the defeat of Fulham.

His excellent performance in the 3-0 win over Arsenal further enhanced his burgeoning reputation, ending a stellar first half-season in England with a direct goal involvement every 155 minutes.

It's clear that Tielemans has the ability to be an integral cog in Rodgers' Leicester rebuild. As a quick-thinking playmaker, he has gelled with Maddison and Vardy and has looked comfortable in either a 4-1-4-1 or slightly further back alongside Wilfred Ndidi in a 4-2-3-1.

However, with £40million needed to prise him away from Monaco, and with other clubs in the position to offer him Champions League football, the Foxes' chances of landing him are perhaps slimmer than they would like.

As per The Independent, United are poised to ramp up their interest in Tielemans should Paul Pogba leave Old Trafford this summer.

However, while he is being considered, he is not United's first choice. If that were to change, though, the midfielder would be an intriguing option for Ole Gunnar Solskjær.

The Norwegian's preferred system appears to be a 4-3-3 and, while Tielemans lacks the defensive sensibilities of Nemanja Matić and the departing Ander Herrera, he would comfortably slot into a more attack-minded role in midfield, like the one Pogba has fulfilled recently. 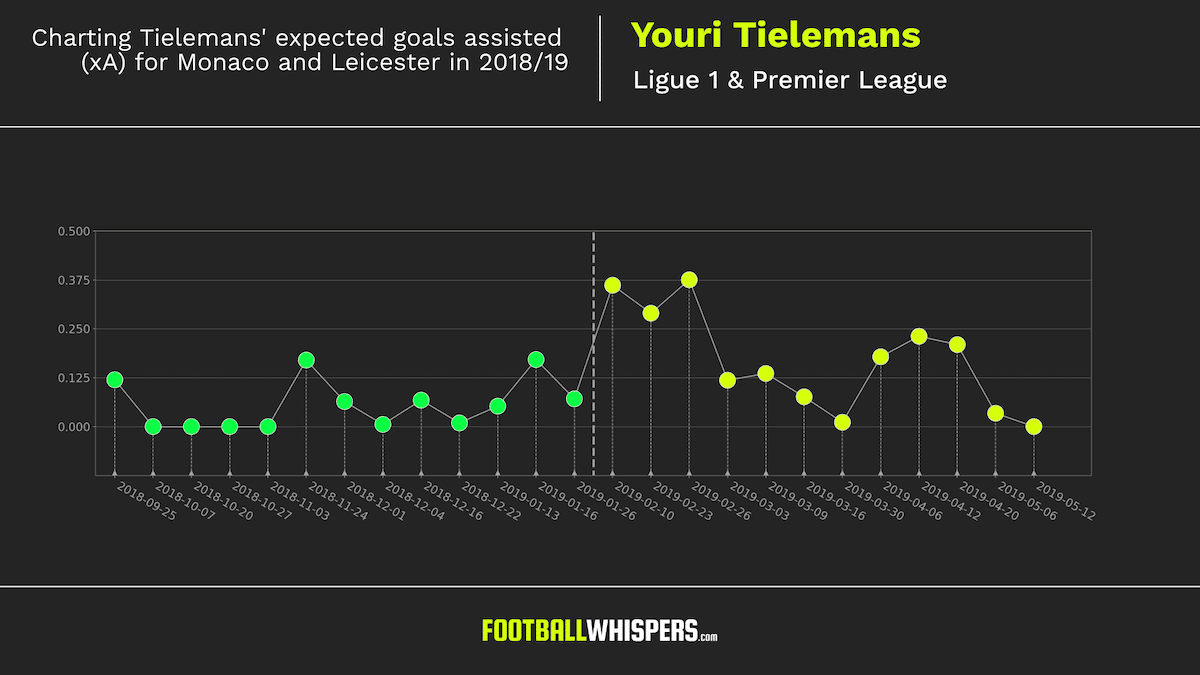 Tielemans completed more through balls per 90 than any other midfielder last season and his eye for a killer pass could benefit Marcus Rashford, who uses his pace to run in behind defenders.

However, like Leicester, United's lack of Champions League involvement weakens their position. They can certainly flex their financial muscle in any potential bidding war, but it seems more likely that Ed Woodward will chase the club's other midfield targets, with Sporting's Bruno Fernandes and Newcastle United's Sean Longstaff among those most frequently mentioned.

Playing for the Premier League champions under the world's most revered tactician is an immensely attractive prospect for any young star.

And while Tielemans exchanged a few words with Guardiola after Leicester's defeat to City last month, he is likely to have heard glowing reports of life at the Etihad Stadium from compatriots Vincent Kompany and Kevin De Bruyne, both of whom are currently on international duty with the youngster ahead of Belgium's Euro 2020 qualifiers against Kazakhstan and Scotland.

But while Tielemans is virtually guaranteed a starting spot with the Foxes, competition under Guardiola would be fierce. Competing for midfield places in Guardiola's preferred 4-3-3 are Fernandinho, David Silva, İlkay Gündoğan, Kevin De Bruyne and Phil Foden.

Guardiola is in the market for a long-term Fernandinho replacement but it's difficult to see where another creative midfielder fits into the picture at City, and the club's fans are arguably keener to see Foden break into the first-team.

Arsenal boss Unai Emery has supposedly admired Tielemans for a long time, with reports in September claiming he was eyeing up a move while the player was still at Monaco.

Tielemans faced Emery's Paris Saint-Germain side three times during the 2017/18 season, notching an assist for Djibril Sidibé in the Super Cup. 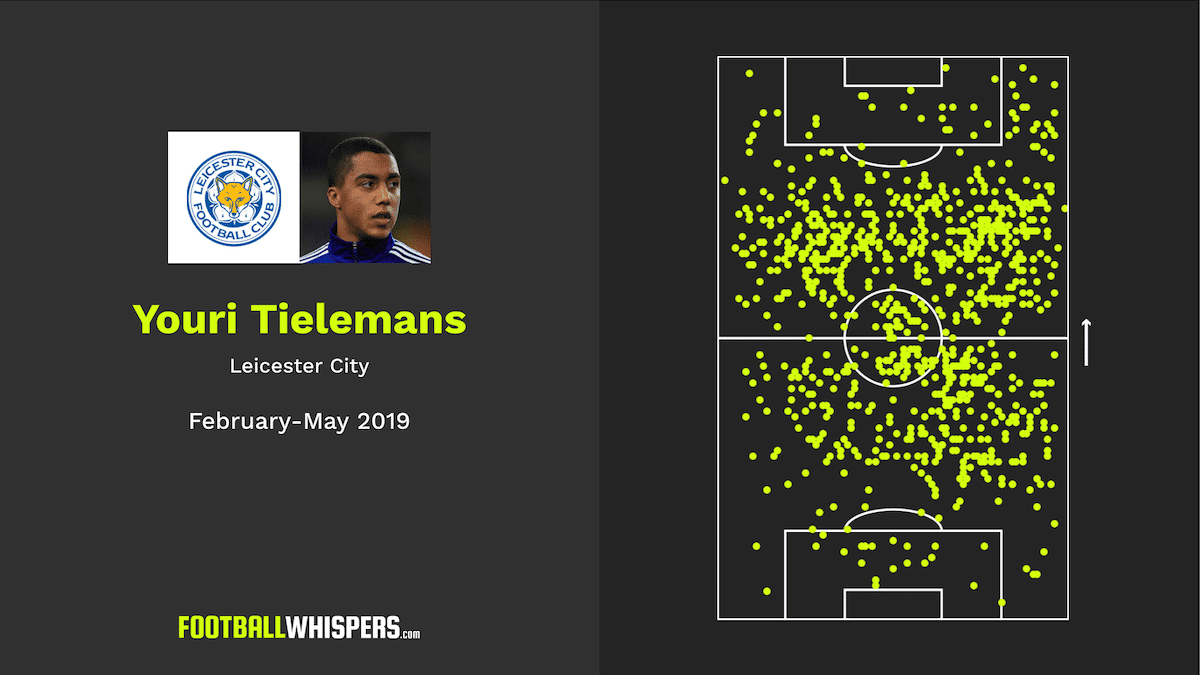 He can certainly bolster the Gunners' creative options. With Aaron Ramsey departing for Juventus and Mesut Özil looking like a shadow of his former self, there is clear rationale behind Arsenal's interest.

Their problem isn't tactical, though. Already unable to offer Champions League football, defeat in the Europa League final to Chelsea has limited Emery's transfer budget. According to BBC Sport's David Ornstein, the Spaniard will have £40million to spend this summer and, with signing a centre-back the main priority, it's hard to imagine them fending off their rivals in the Tielemans race.

Unless, of course, they offload someone Özil…

Tottenham expressed interest in taking Tielemans on loan in January before he joined Leicester.

Now, having missed out on Champions League glory, Spurs are expected to make a splash in the transfer market having not signed a player since Lucas Moura in January 2018.

And Tielemans could play the Dembélé or Eriksen role within Pochettino's system. Adept at finding space between the lines, his penetrative passes could unlock defences for Harry Kane, but he would be just as capable partnering Sissoko in a deeper position in front of the back-line.