Leicester City want to sign Youri Tielemans. Unfortunately for them, however, so do a number of other clubs.

With no clause in place giving them first dibs, the Foxes have a battle on their hands to convince the Monaco midfielder that his long-term future is with them. The Belgian maestro appeared to enjoy himself at the King Power Stadium during the second half of the 2018/19 campaign and that will work in their favour.

But with no European football on the table, Tielemans may call elsewhere home come the beginning of next season.

It would no doubt be a blow for Brendan Rodgers and his team. The recently turned 22-year-old is one of the brightest midfield talents in Europe and he struck up an understanding with James Maddison and Jamie Vardy.

Finding someone to fill that role to the level the on-loan man did won't be easy. But it isn't impossible. The project at Leicester will no doubt interest the masses. A stable Premier League club with a talented manager, a clear philosophy and a talented playing squad.

The 2019/20 season will see them competing for the best of the rest title, they may even gatecrash the top six if they're able to keep key players at the club.

It's the sort of team players will want to join. It's an easy sell. With this in mind, we've taken a look at four possible midfielders the 2015/16 Premier League champions could sign this summer. 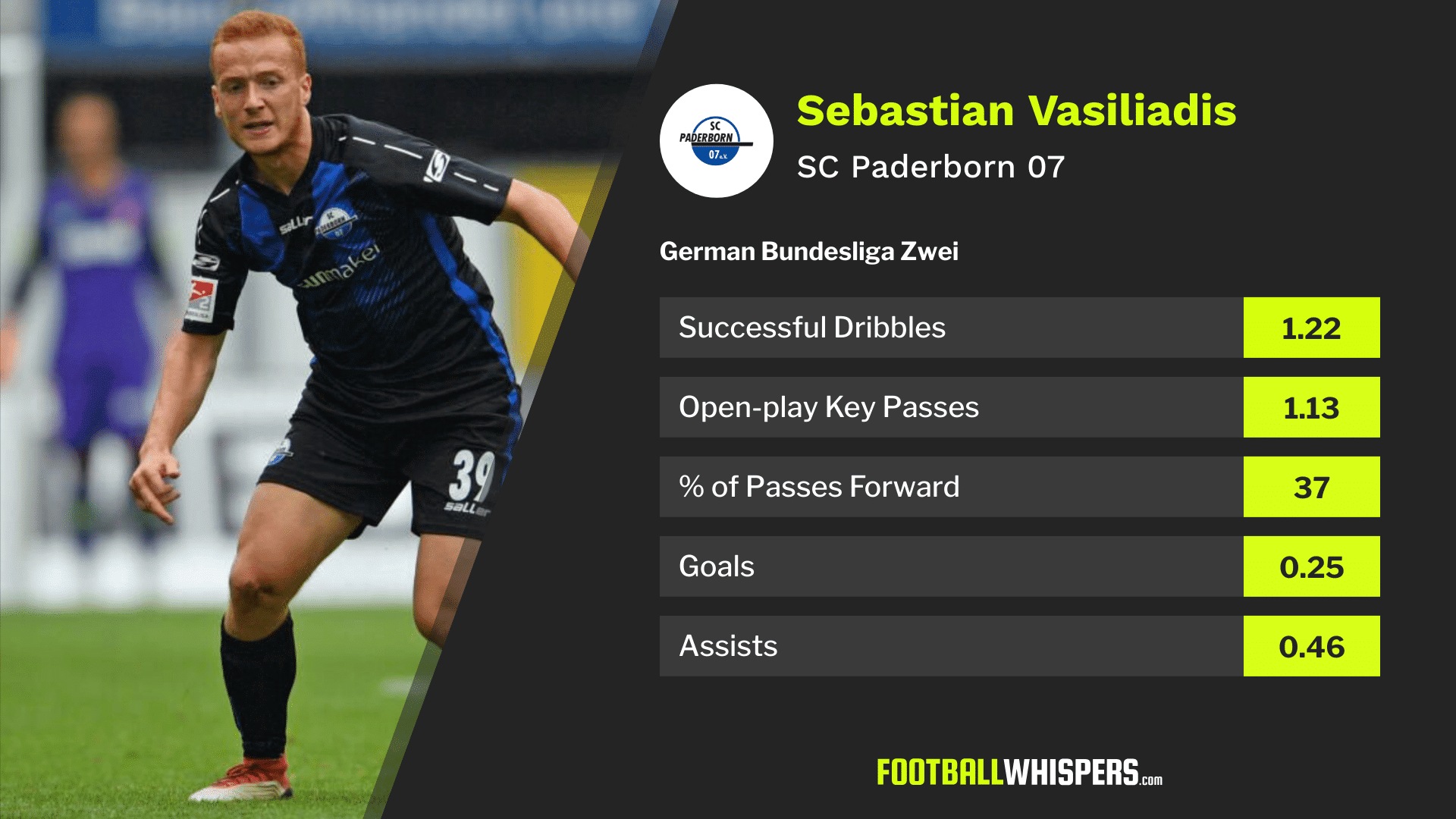 One of the stars of the season for Paderborn as they clinched promotion to the Bundesliga, the 21-year-old midfielder was at times almost unplayable. A positive dribbler, averaging 1.22 per 90 minutes, he has this ability to roll opponents and then burst into space.

He pairs that with the skill of being able to pick a pass, more often than not an incisive one, to create opportunities from deeper areas. He was averaging almost an assist every other game in the Bundesliga II last season while averaging a goal every four matches.

He's an all-rounder and a potential game changer. However, he's untested at the top level and this makes him something of a risk. But Leicester aren't afraid to take such chances. As evidenced when they plucked N'Golo Kanté from Caen just one year after he was promoted to Ligue 1.

The 24-year-old Fiorentina man has been around the block. He's closing in on 200 appearances in all competitions with 174 of those coming in Serie A. He's a combative midfielder with an eye for a pass, as well as being a goal threat.

The Viola have struggled this season but on an individual level, Benassi has had a successful campaign. His return of seven goals in the Italian top flight means he's had the most productive season of his career.

He brings goals to the midfield and while he isn't a ball carrier, he completes just 0.73 dribbles, he is progressive when in possession, playing over 30 per cent of his passes forward. 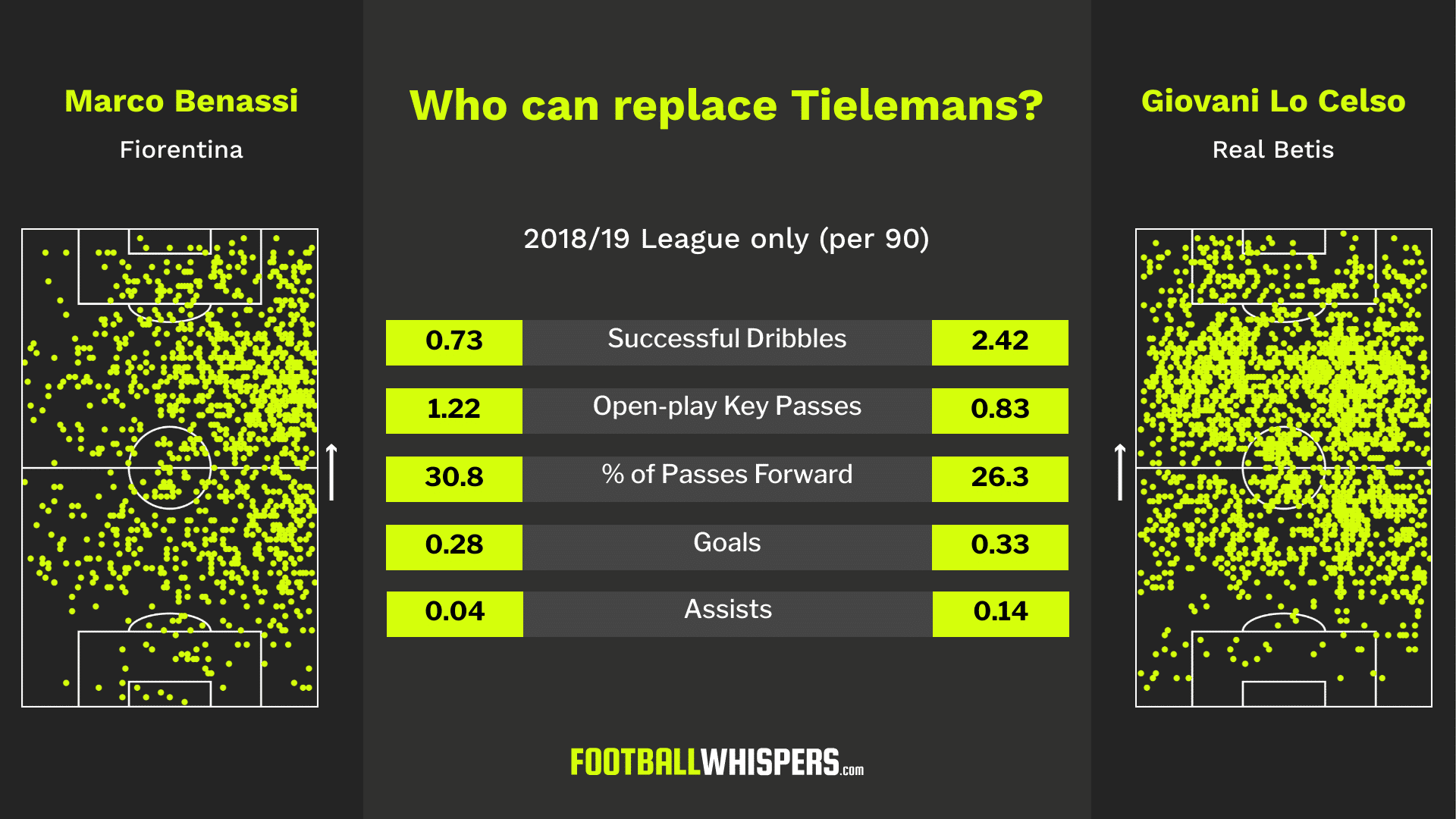 The Argentine playmaker has just made his move to Real Betis a permanent one having spent the season on loan in LaLiga. The former PSG man is enjoying life in Spain and his form is reportedly interesting Tottenham and Everton.

It's little wonder the Premier League duo are keeping an eye on the 23-year-old. He's the sort of midfielder who thrives in the chaotic, transitional football so many teams in the English top flight try to play.

He can beat a man, completing 2.42 dribbles, but his real value is how he manages to influence the game all over the pitch. It's shown in his touch map above. Despite being viewed by many as a creative force, he is by no means lax when it comes to the defensive side of things. He could strike up a formidable partnership with Wilfred Ndidi.

One of the many stars of this current Ajax side, Van de Beek often gets overlooked in favour of Frenkie de Jong but his role in the Eredivisie champions reaching the Champions League semi-final was arguably more important than the Barcelona-bound man.

He's a whirlwind of a player, capable of impacting all thirds of the pitch. Only just 22, he's made 30 or more appearances in three consecutive campaigns now. He's not a dribbler, he can break the lines with his passing but what he's really good at is producing when it matters most.

He chips in with goals and assists, and in terms of output, he's the closest player to Tielemans on this list. He won't come cheap, however, with Ajax holding teams to ransom when they come calling for their stars, but he's got the potential to be one of the most complete midfielders in the modern game.