The 2019 Copa América begins on Saturday, with Chile aiming to clinch a third successive title after tasting success in 2015 and the Centenario in 2016.

Neymar, Brazil's star attraction, has been ruled out through injury but there will be no shortage of quality on display in Brazil, with Argentina talisman Lionel Messi looking for his first triumph in this tournament.

Elsewhere, Manchester United fans will be interested to see if Alexis Sánchez can recapture his best form for Chile, while Uruguay are once again armed with their potent Cavani-Suárez axis in attack.

And, as usual, the Copa will serve as a shopping window for clubs across Europe as the transfer market heats up, with scouts out in full force to monitor the progress of the tournament's younger stars.

Here, we spotlight seven emerging talents that could steal the show in Brazil.

One of Brazil's hottest prospects, it's been a whirlwind last 12 months for Paquetá.

Having starred in his home country for Flamengo, he joined AC Milan in January of this year, just a few months after scoring on his debut for the national team.

While he spent the last few months of the season acclimatising to life in Italy, the 21-year-old is expected to feature prominently for Tite's men, especially now Neymar won't be involved.

A flair-based attacking midfielder, Paquetá is likely to be vying for a spot against Philippe Coutinho. However, given the Barcelona man's lack of form, this could be his time to shine.

The 23-year-old, who's been strongly linked with a big-money move to Tottenham Hotspur, is expected to play an important role in Argentina's campaign.

Lo Celso has breathed new life into his career at Real Betis. The 2017/18 campaign was a frustrating one at Paris Saint-Germain and his confidence wasn't helped by not featuring in a single minute at the World Cup.

However, having starred in Seville, scoring nine goals and adding four assists for Quique Setién's side, Lo Celso offers fresh hope for Argentina, especially after impressing in the 5-1 friendly win over Nicaragua.

With Spurs already interested, expect speculation over Lo Celso's future to sky-rocket with a star turn in Brazil.

The 21-year-old goalkeeper is tipped for big things after a string of impressive displays for Colombian club Millonarios, with his father recently claiming there has been contact from Barcelona.

He also showcased his shot-stopping abilities in the recent friendly win over the United States but his credentials will be given a more robust examination in the Copa group stages when he comes up against Brazil.

A wonderful talent, Faríñez will be as crucial for Venezuela at one end as West Bromwich Albion striker Salomón Rondón will be for them at the other.

Valverde will be central to Uruguay's hopes after a promising few months.

The 20-year-old Real Madrid prospect was given plenty of opportunities at the Bernabéu following Zinedine Zidane's return and laid down an emphatic marker for the Copa with a stunning volley against Panama.

A multi-functional central midfielder, Valverde is equally capable of producing spectacular goalscoring moments, like the one above, or getting back to fulfil his defensive duties.

He faces stiff competition from Juventus‘ Rodrigo Bentancur and Inter's Matías Vecino but will be confident of being involved in La Celeste's opener against Ecuador following his unmissable impact from the bench in the defeat of Panama.

While being labelled the ‘New [insert nationality here] Messi' is often the kiss of death, Kubo's label is a telling indicator of the excitement surrounding him.

After leaving the Barcelona academy in 2015, the 18-year-old has been lighting up Japan's J-league with FC Tokyo, scoring five goals and bagging two assists in 16 games.

Renowned for his balance and exceptional dribbling skills, it's remarkable to consider the hype around him given he only has 23 minutes of action for the Japanese national side. Even with that, don't be surprised to see clips on Twitter of him leaving defenders in his wake over the next few weeks.

Well-known to Premier League fans, the 22-year-old has made an excellent start to his international career, scoring five goals and adding three assists in his first ten appearances.

That included strikes in each of the Seleção's warm-up friendlies, against Qatar and Honduras. 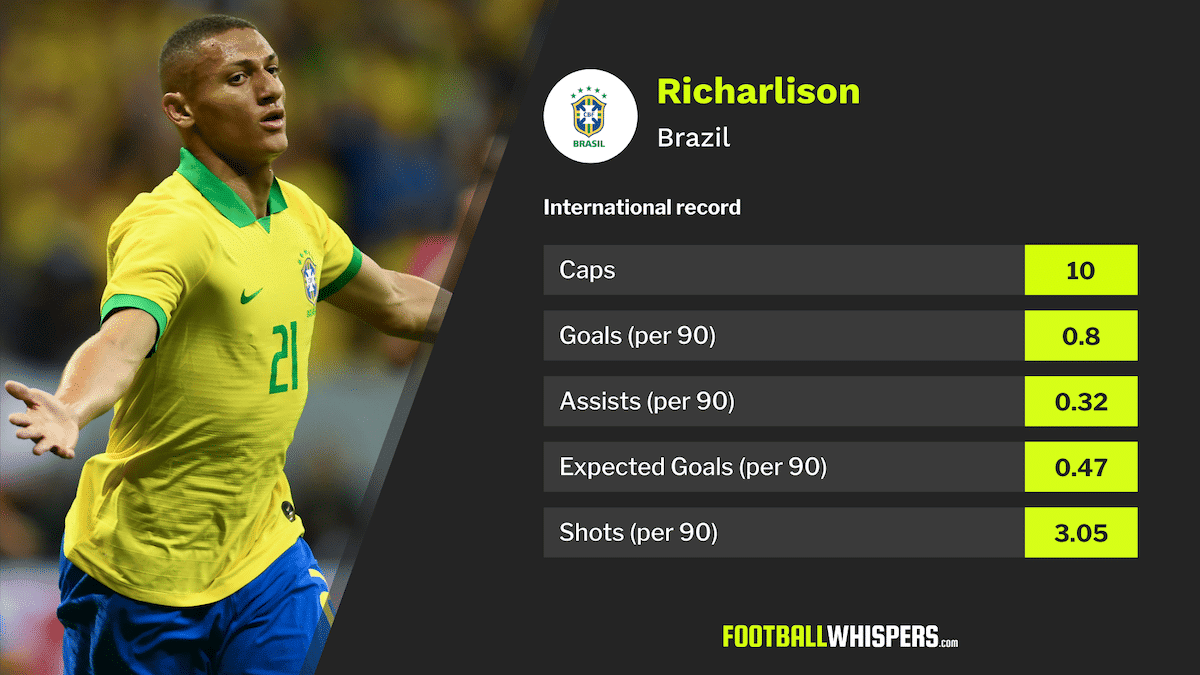 Brazil aren't short of options up top with Roberto Firmino, Gabriel Jesus and David Neres their most potent goal threats. But Richarlison is showing signs that this could be his tournament in Neymar's absence.

After scoring 13 times in his first season at Everton, he certainly has every reason to think that.

With six goals despite limited involvement in his first season at Inter, Martínez has already provided compelling evidence that he's a star-striker-in-the-making.

Still only 21, he was cut from Argentina's final World Cup squad but has warmed up for the Copa in style, bagging a brace in the routine win over Nicaragua after being introduced for the start of the second half.

Inter team-mate Mauro Icardi is not part of Lionel Scaloni's Copa panel but the young forward will still have Manchester City machine Sergio Agüero for company as he looks to nail down a starting berth in the 4-2-3-1 ahead of Messi.

His brace against Nicaragua has certainly helped his case, but given Agüero's status as one of world football's most accomplished marksmen, Martínez may have to make another sizeable impression from the bench.