La Liga’s rules on non-European Union players might force Colombia titan Yerry Mina out of Barcelona after only half a year in Catalonia.

Clubs can only register three non-EU players although some, like Lionel Messi, a naturalised Spaniard, take a European citizenship to get around it. A non-EU player spot is, therefore, hot property, and it seems that Barcelona aren’t sure whether Mina’s talent can pay the rent.

With it looking like he’ll move – whether permanently or on loan – we tell you all you need to know about the Colombia defender.

Who is Yerry Mina?

Named after cartoon mouse Jerry of Tom and Jerry fame, Yerry Mina started out as a goalkeeper, a family tradition, before moving out to centre-back. After spells with Colombian clubs Deportivo Pasto and Sante Fe, Mina moved to Brazilian side Palmeiras in 2016.

Interest from Europe soon followed, with Barcelona, Real Madrid, and Manchester City all reportedly interested by the end of that year. 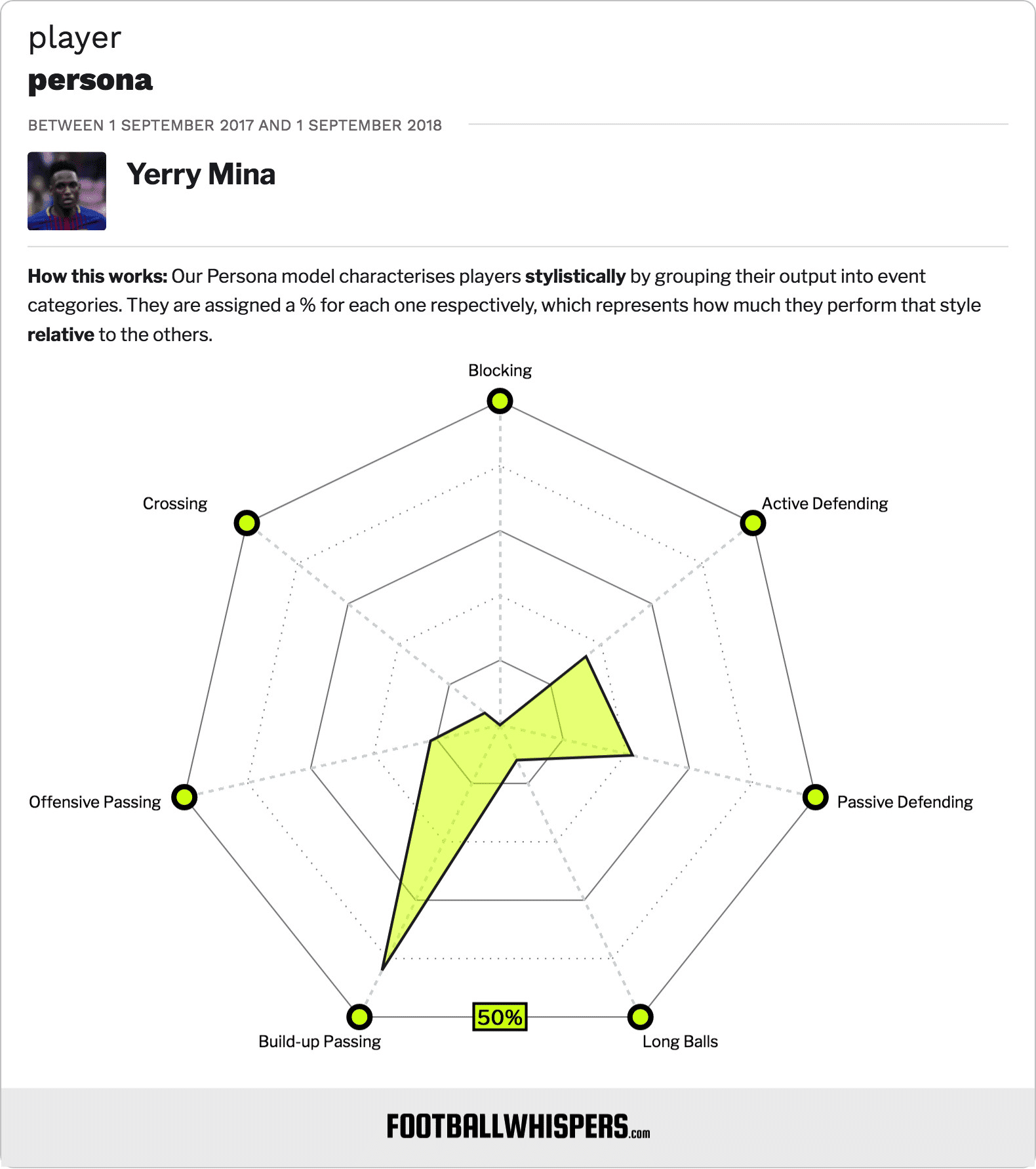 It was Barça who got their man, though, signing the Colombian in January 2018 for £10.5million. However, Mina has only been used sparingly since joining the Catalan club. He’s made just five appearances in the league and one, seven-minute substitute appearance in the Copa del Rey.

What are Yerry Mina’s main strengths?

A keen sense for danger and an unusual set of physical skills are Mina’s main assets. He spots danger developing quickly and is able to act on it, his long legs surprisingly agile in accelerating him forwards. His speed also makes him good at recovering if the team have been caught short.

These long legs also give him an extraordinary reach in making tackles, meaning that he’s able to make challenges that most other defenders simply wouldn’t physically be able to make, which can often catch forwards out.

Unsurprisingly, considering that he was pursued by Barcelona for so long, Mina also has good feet for a big man. In the picture below, pinned back by two Levante players, he (in blue) drags the ball back and flicks it to his left to his free team-mate. 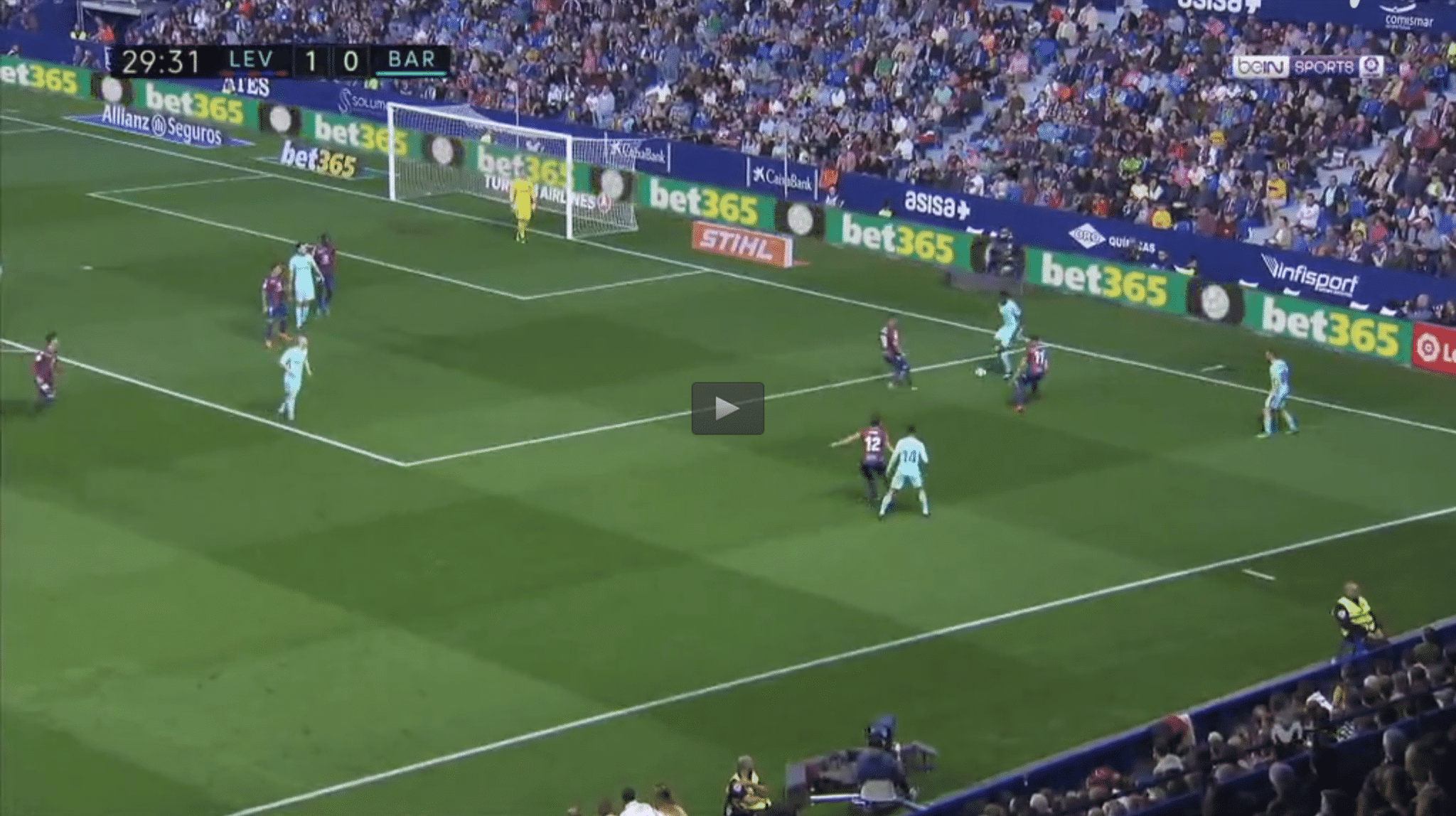 The on-ball ability isn’t limited to flicks, generally a calm presence in possession and capable of line-splitting passes if needed.

More traditionally for a centre-back, England fans will be aware of his aerial prowess, Mina having been the one to score the last-gasp equaliser in the World Cup round of 16 match. He transfers this to the defensive side of the game as well, heading away crosses left and right.

What are Yerry Mina’s main weaknesses?

Mina often gets too tight to opposition strikers when they’re receiving the ball with their back to goal, leading either to a foul or being turned easily. Sometimes the Colombian’s long legs means that he can reach and make a recovery tackle, but it’s not always an ideal position to be in.

His long reach also seems to tempt him into more tackles than is wise to go in for. They tend not to result in fouls, but they can take him out of the game while not winning the ball. English clubs tend to be a little more reserved in their central defenders though, so the style of the Premier League could help him to pick his moments a little better. 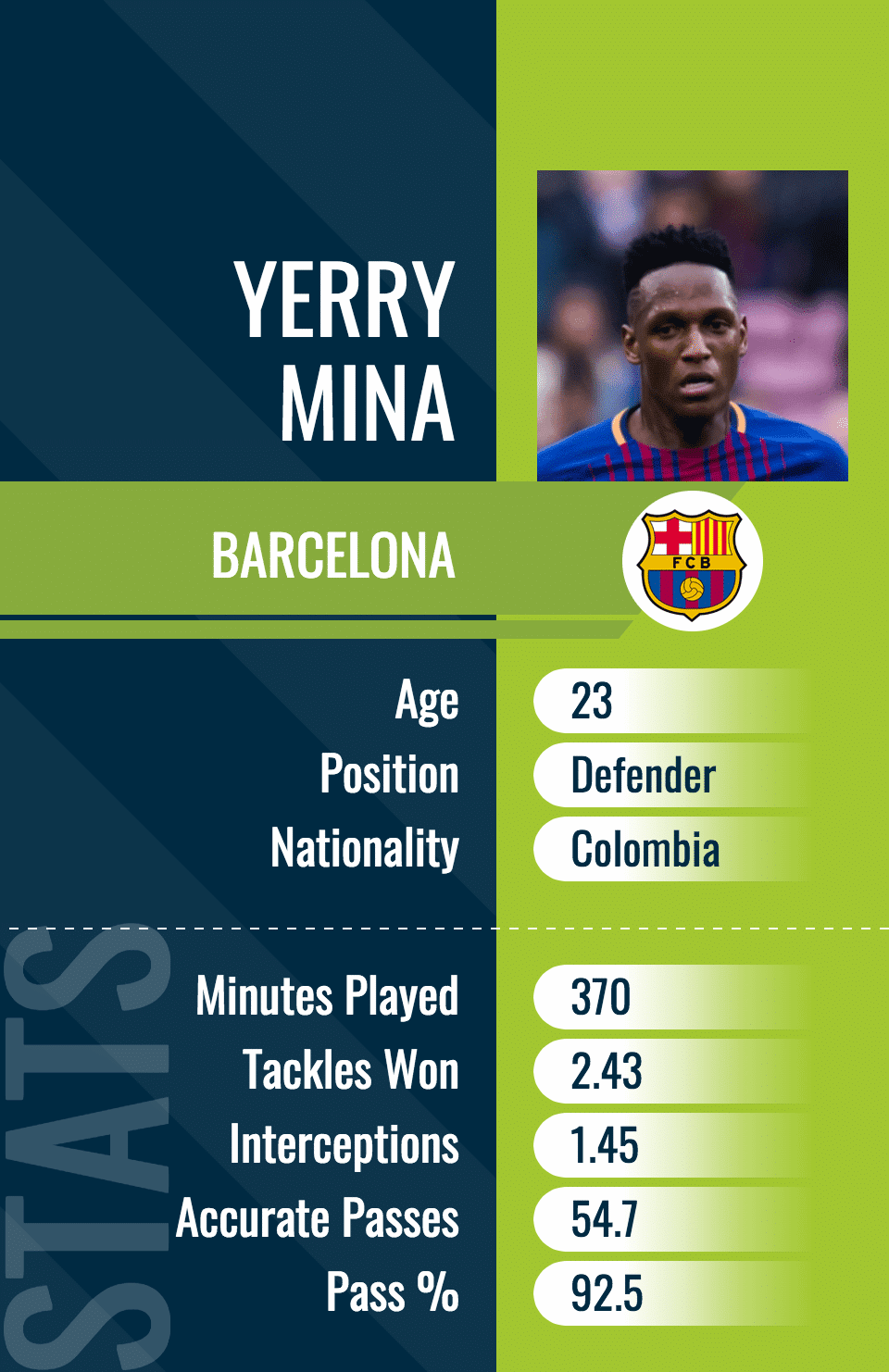 How much would Yerry Mina cost?

Before joining Barcelona, Mina said that Gerard Piqué was one of his role models, and he’s now had six months to learn from him first-hand. This kind of experience, and the general training and experience that Mina will have received at Barça, can’t be bought and could bring its own value to Mina’s new club.

Either a loan or a permanent transfer for £21m is a bargain in today’s market for a centre-back of Mina’s quality, and it's no wonder so many Premier League clubs are interested.