Premier League survival isn't assured just yet but four points from their last two matches have put West Ham United in a favourable position. The Hammers find themselves six points clear of 18th-placed Southampton with just six games of the season remaining.

A win against second-bottom Stoke City on Monday night should be enough for David Moyes' men. Plans for next season can be acted upon and players on their wish list can be courted. According to reports in Spain, the club have placed Barcelona‘s Yerry Mina at the top of that list.

The centre-back is the player many believe Barça will sacrifice to make room for Arthur. The La Liga leaders are allowed just three non-EU players in their squad and it's unlikely Philippe Coutinho or Paulinho will make way for their compatriot.

The Colombian defender will be given the opportunity to ply his trade elsewhere. It's a way for him to put himself in the shop window. If he impresses enough he can force his way into the Barça squad. If not, the Catalan club can simply sell the player they signed for £10million in January for a profit. It's win-win for the Blaugrana.

The reports in Spain claim the former Palmeiras defender favours a move to the Premier League. There may be a scramble for his signature but it's unlikely to include any of the top six. They aren't the type to develop a player for another club. It gives an opportunity for mid-table club to land a potentially world-class defender.

Defensive reinforcements are something the Hammers need. Badly. Only two teams in the English top flight have been breached on more occasions this season. Joe Hart and Adrián have failed to impress when given a run between the sticks but the centre-backs haven't cast themselves in a positive light either.

Furthermore, James Collins is 34 and won't be playing forever, Angelo Ogbonna has failed to convince the masses he is of the requisite quality and Winston Reid isn't the most durable. West Ham need fresh blood in their backline. But how does Mina compare to centre-backs already at the London Stadium? 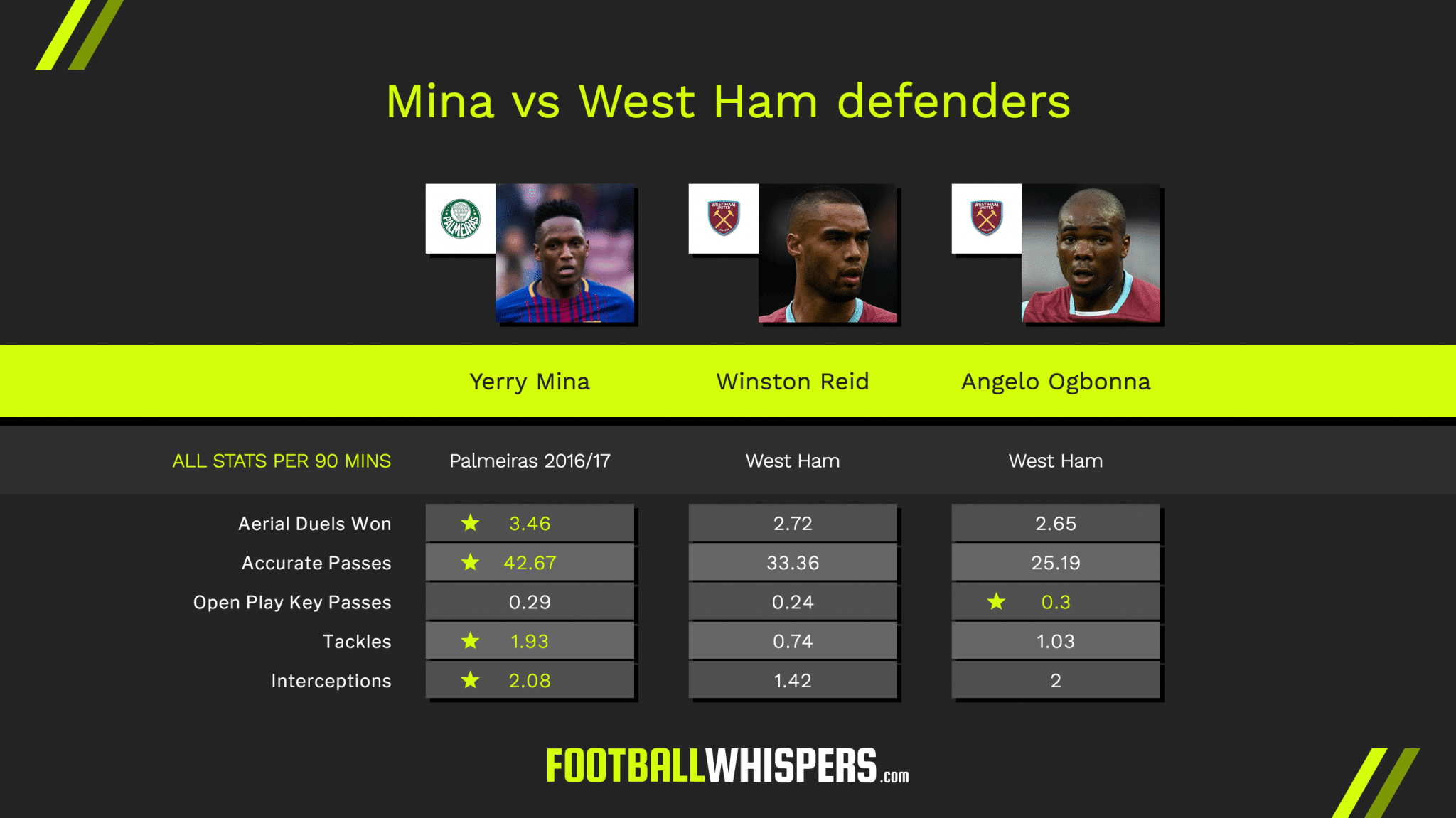 As expected, the 6ft 4ins defender excels in the air – at both ends of the pitch. He scored six goals in 28 appearances for Palmeiras but it's what he can do in his own box that will be more of interest to West Ham fans.

When comparing Mina to Reid and Ogbonna, it's the former who comes out on top for aerial duels won. This stat is influenced by the team they're playing in and how many times they're called into action.

It shows, however, that he is aggressive when it comes to winning headers. For further context, only nine players in the Brazilian league averaged more than the 24-year-old last season.

The West Ham duo trail Mina in terms of accurate passes with Mina averaging 17 more than Ogbonna. The Colombian plays a higher percentage of his passes forward (56 per cent to 48 and 52) and completes more of his attempted passes (82 per cent to 81 and 76).

In terms of open play key passes, the Italian pips Mina by 0.01. It shows that he's progressive on the ball and isn't just one looking to play it simple. The Hammers will want Manuel Lanzini, Marko Arnautović and Michail Antonio on the ball as often as possible. The Barcelona player has the ability to play out from the back and won't waste possession.

Tackles and interceptions are similar to aerial duels. They're dependant on the system the team is operating in. In theory, a team that dominates the ball will make fewer tackles and interceptions than a team defending for the entire 90 minutes. Are the players in the defensive team better at tackling and reading the game or are they just busier? It's arguably the latter so it's not a stat to look into too much.

Having said that, however, the stats paint a picture of a player who reads the game well and puts himself in positions to regain possession for his team. West Ham need someone like that. Most teams need a player like that in their backline.

On paper, Mina ticks all the boxes for a modern defender; he reads the game well, he's not going to be bullied in the air and he's composed in possession.

He may take time to adjust to the rigours of the Premier League but if he acclimatises quickly and manages to replicate the form which convinced Barcelona to sign him the Hammers could bag themselves one of the bargains of the summer – even if it is for a single season.

The Colombian is exactly the sort of player West Ham should be targeting. The sort to help them climb the table in the short-term and put them in a stronger position next summer to improve their squad.