The recruitment team at Everton are looking to flex their financial muscle this summer. Ronald Koeman and Steve Walsh are set to be given the largest transfer budget in the club's history as they piece together a squad capable of challenging the top six.

Over recent weeks the Toffees have been linked with big-money moves for Alex Oxlade-Chamberlain, Jordan Pickford and Michael Keane.

The Burnley centre-back was a top summer transfer target for Koeman but Manchester United's interest in their former academy player has derailed their attempts of securing the 24-year-old. According to reports in the Times, the Red Devils are ‘very close' to finalising a £25million deal.

Everton haven't dwelt on this and have already moved on. Athletic Club's Yeray Álvarez is reportedly a potential arrival at Goodison Park. The Basque-born centre-back is apparently the man in the pictures with Koeman taken at the Hilton hotel in Liverpool city centre this week.

It comes as no surprise that the Merseyside club are in the market for defensive reinforcements with Phil Jagielka and Ashley Williams not getting any younger.

When looking at Athletic Bilbao defenders it's Aymeric Laporte who is usually the centre of attention. The French centre-back was reportedly at the top of Pep Guardiola's wish list last summer before an injury put that potential move on the shelf.

However, it's Yeray who has impressed this year. The highly rated 22-year-old has played at right centre-back for the majority of the season alongside Laporte. He missed a month of action when he had a surgery after being diagnosed with testicular cancer but returned at the beginning of February and has played a further 17 matches since.

It's been somewhat of a meteoric rise of Spanish Under-21 international having only made his first-team debut at the beginning of the season. He came up through the ranks and, like many others at Athletic Club, he wasn't rushed into the spotlight. He was given time to develop and mature as a player and because of this the club are now reaping the rewards.

His fine form was rewarded in February when he signed a new deal to extend his stay at the San Mamés Stadium until 2022. If Everton have serious interest in the defender they're going to have to be prepared to part with €30million, Yeray's release clause, because the Basque club simply don't negotiate.

Yeray is your stereotypical modern day defender. He's aggressive in his play, he's proactive both on and off the ball, he's powerful in the air and he can pick a pass.

For someone so young his positional awareness is one of his main strengths and it's why he's able to comfortable switch between sweeping and being the one to attack the ball depending on the situation. 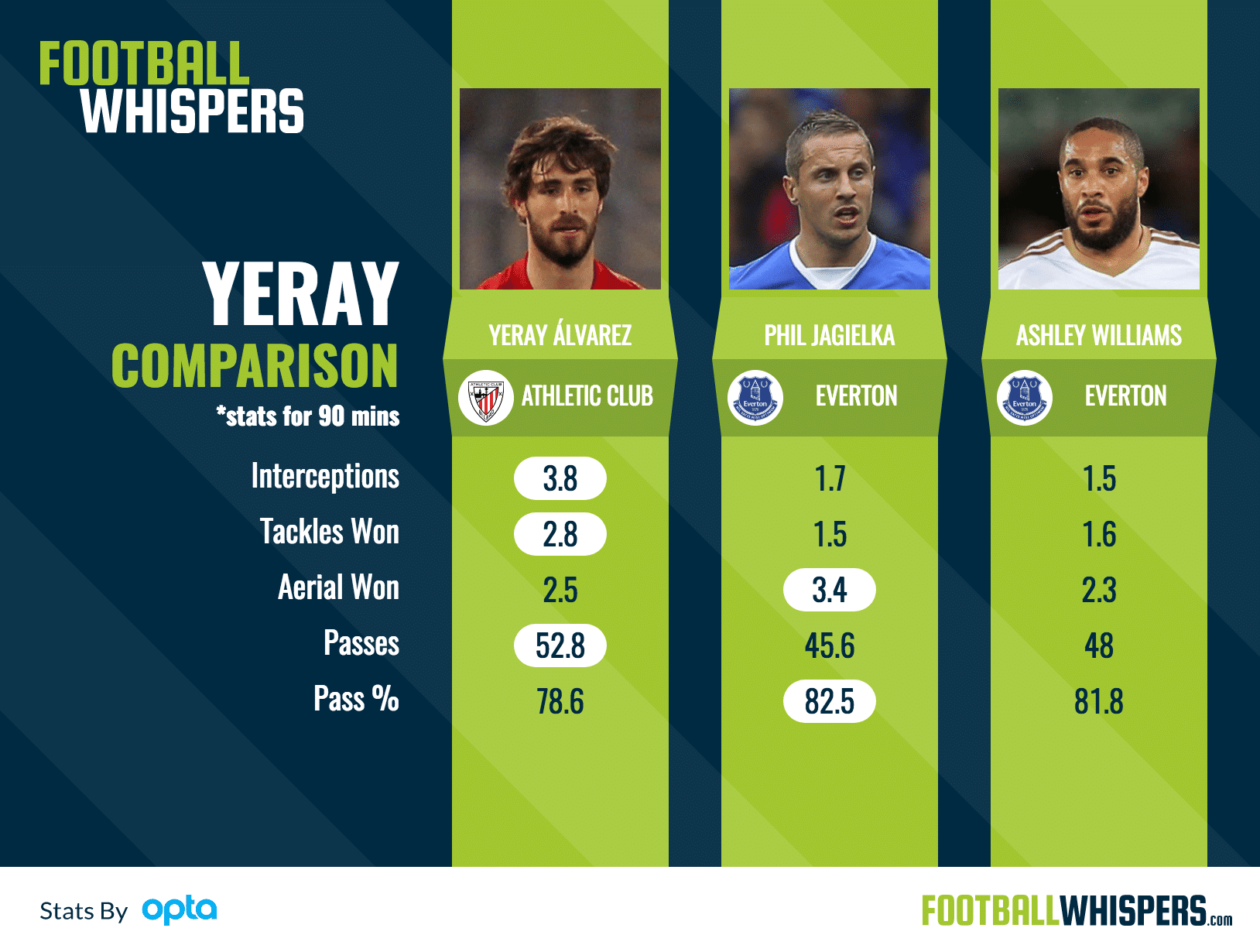 His aggressive nature shines through when looking at his interception numbers. He's always on the front foot looking to anticipate a pass and prevent it before it reaches it's destination. The Bilbao club play with a high line and he's often tasked with being the one to stop that out ball.

The opposition look to play the ball to the striker in the hope of relieving the pressure on them but Yeray ensures, more often than not, that the ball comes straight back at them and there's no time to breath. As shown in the graphic above, the Athletic player makes more interceptions per 90 minutes than Jagielka and Williams combined.

However, it is worth noting that the Everton defenders have a certain Idrissa Gueye ahead of them. The former Aston Villa man makes 4.2 tackles and 2.5 interceptions per 90 meaning he puts in a shift protecting his centre-backs.

Yeray falls short in the pass success category but it's not a huge percentage drop. What's interesting though is he plays more passes than the Everton two. On average he plays seven more passes than Jagielka per 90 minutes, which over the entirety of the season equates to 266 more passes in Yeray's favour. It shows just how comfortable he is on the ball and why he'd be a good fit in Koeman's possession based set up.

What Yeray does well

As previously mentioned, he's aggressive, he reads the game well and he's a front foot defender. He seems perfect for the Premier League with so many teams now adopting a high press approach. If you want to squeeze the opposition then he's a good defender to add to the team. 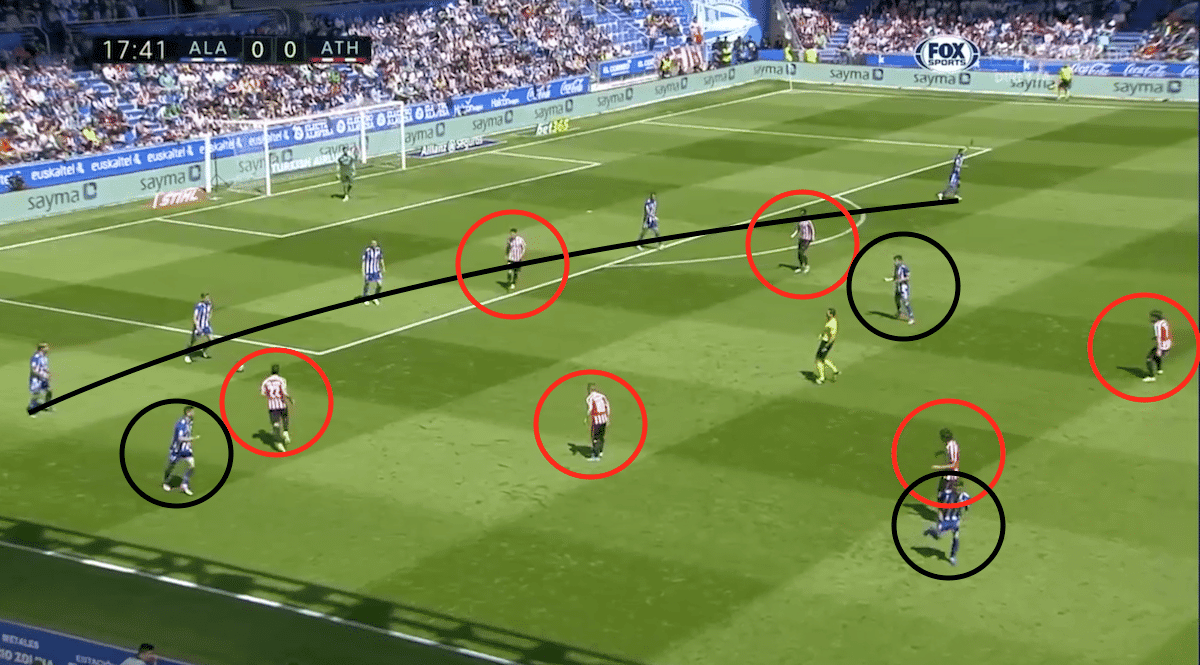 In the picture above you see Athletic Club have six players deep in the Alaves half. The home side, with nine players in shot if you include the ‘keeper, have the ball and are looking to clear their lines. Ideally, Ernesto Valverde's men want to keep them hemmed in and build another attack. 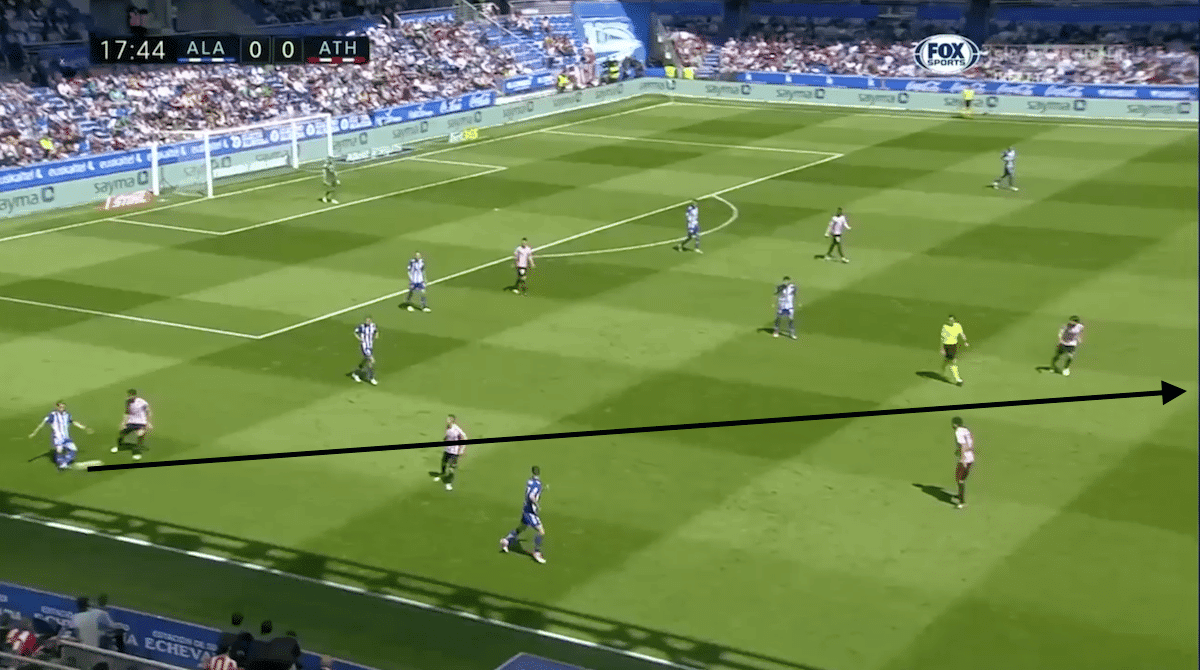 The spacing of the away side isn't as good as could be and they aren't quick enough to close down the man in possession and he's able to play an incisive pass through the middle of the pitch and into the feet of the striker. 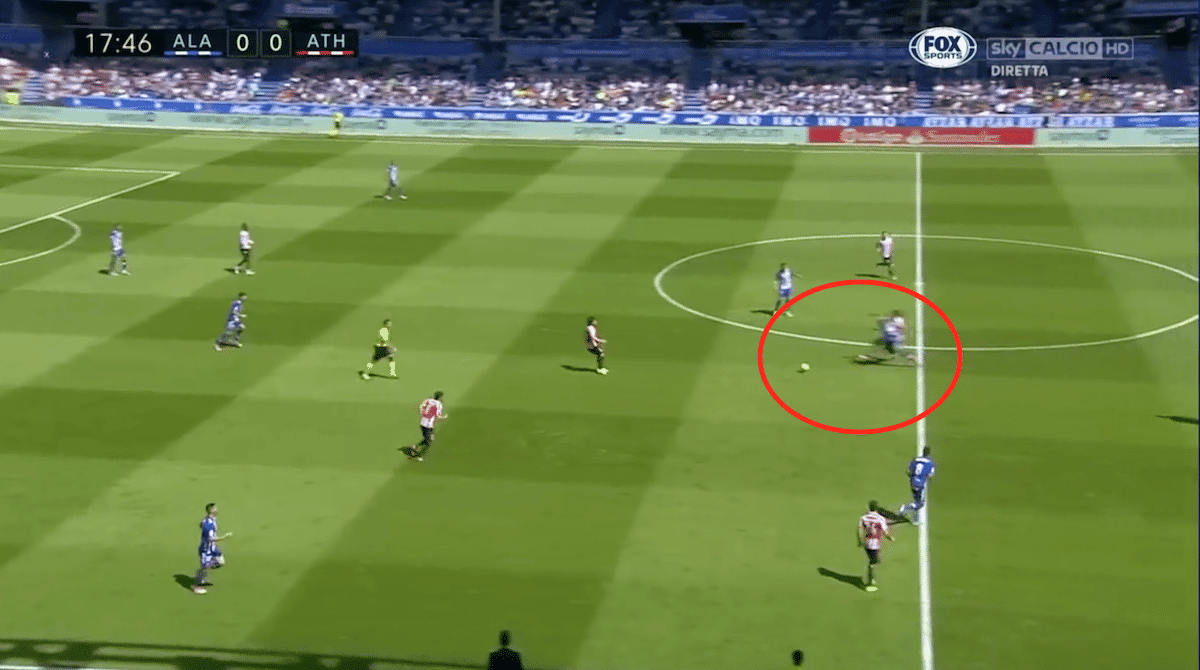 However, Yeray has read the situation and he's on his toes. He wins the ball ahead of the striker and regains possession for his side. He's not reckless in doing so or overly physical either. It would be easy there to give away a free-kick but he cleanly wins the ball. Before Alaves have even had chance to push out Athletic are already on the attack again. 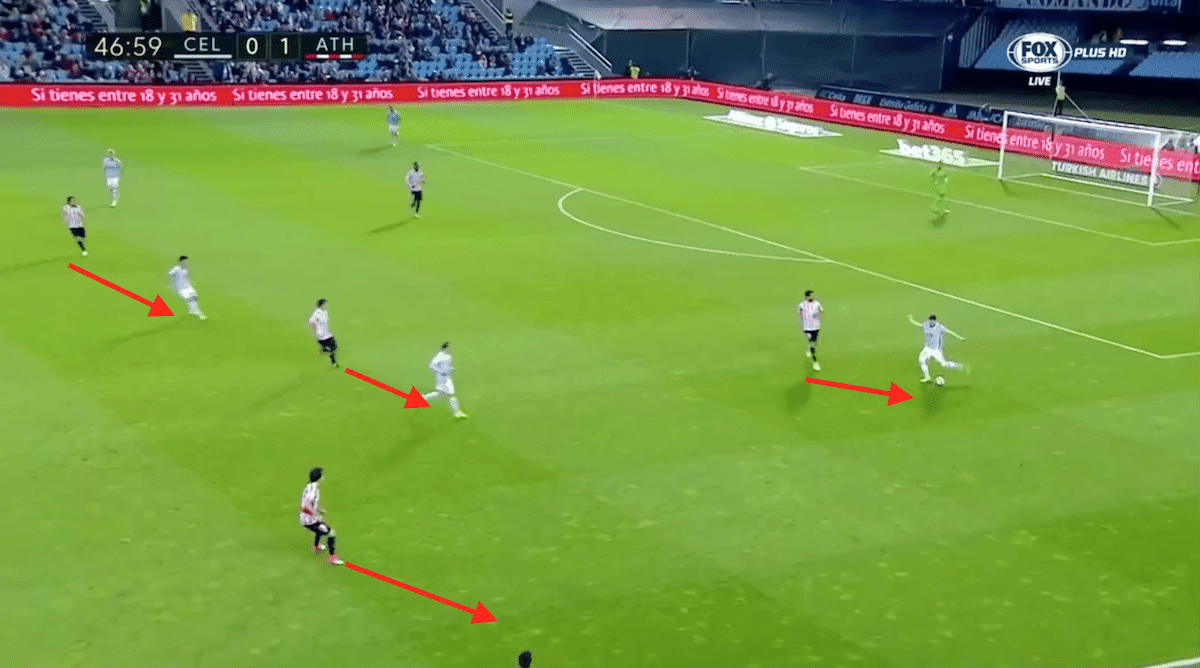 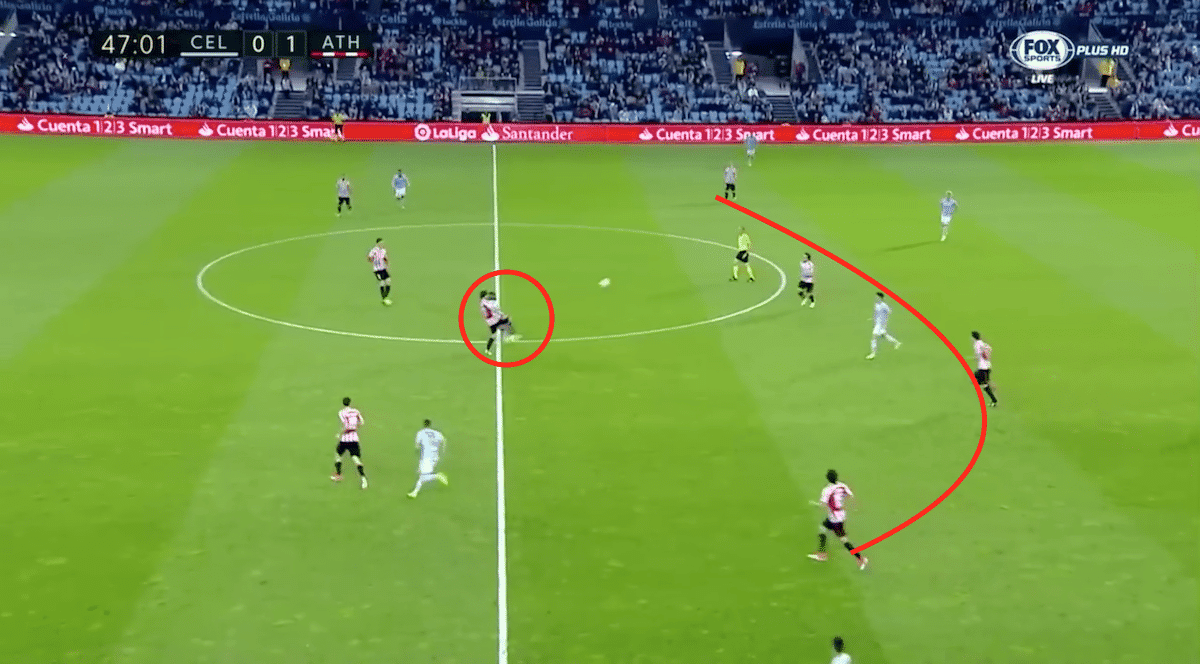 Here we see the away side press Celta Vigo forcing them to go long. The ball is lofted forward and Yeray follows the striker as he drops off into the space behind the midfielders. The defender wins the ball, knocks it down to one of the midfielders and they're able to keep pressure on the Europa League semi-finalists. 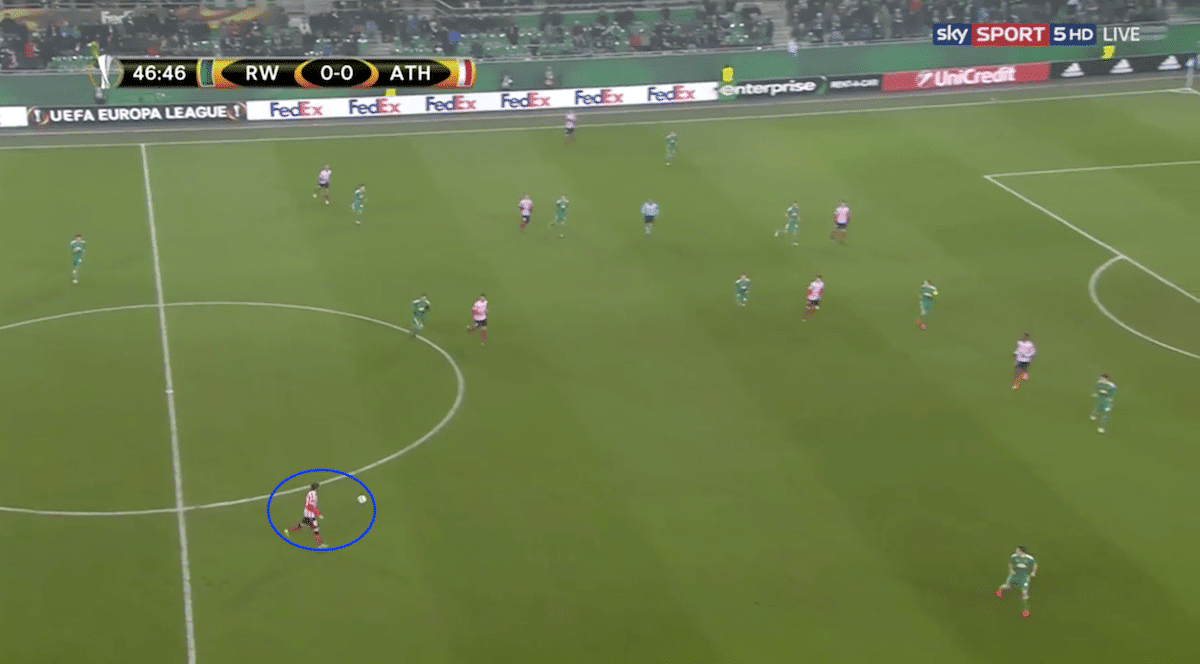 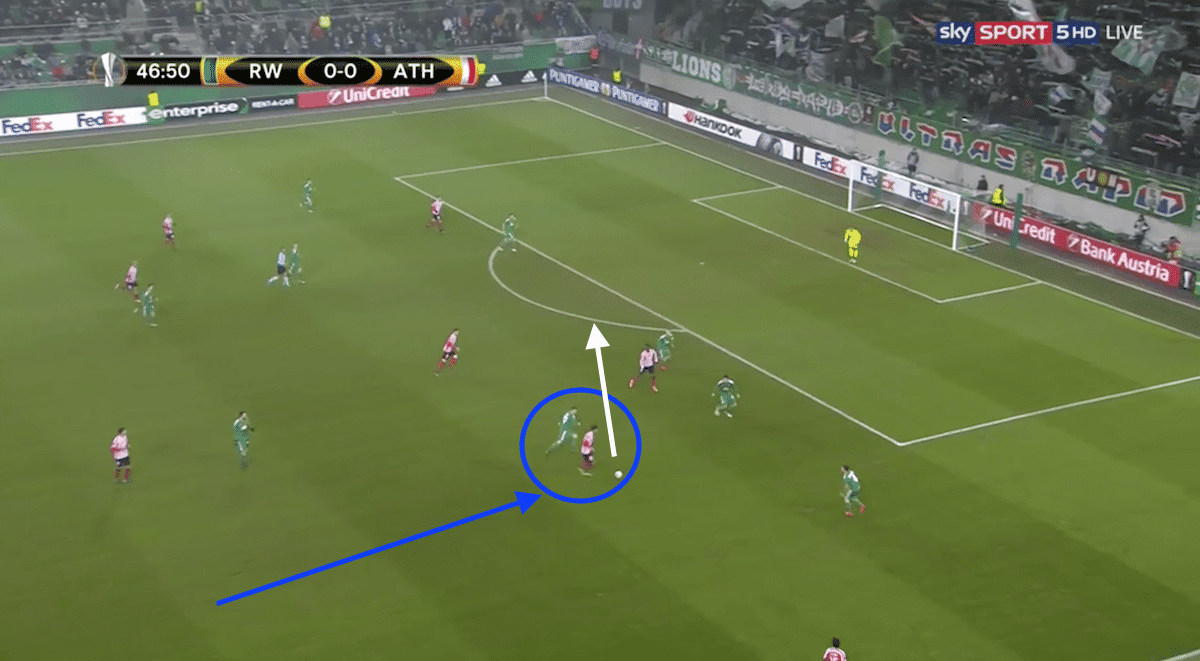 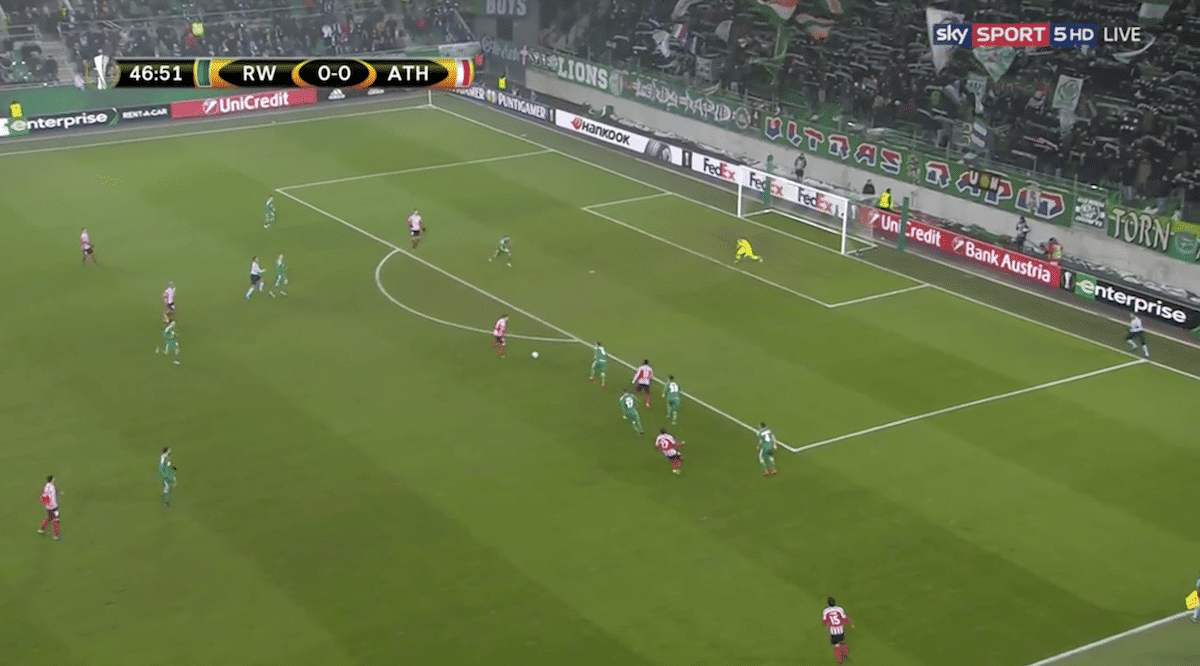 Most defenders these days can play those raking 60-yard balls. The majority are also able to switch the play with relative ease. The long, hopeful balls are becoming more refined by the season. However, it's still rare to see a centre-back pick the ball up in a deep area and carry it forward before threading a pass through that a playmaker would be proud of.

But Yeray has that ability. You can see it in the series of pictures above. He could take the safe option and play the ball wide right but instead he takes it upon himself to make something happen. It's perfectly weighted but, unfortunately for him, the chance isn't scored.

It's not the sort of deal to get the neutral fan off their seat and worrying about Everton as a force in the Premier League but it would be a statement of intent. The Toffees would be snapping up a highly rated centre-back, who has been linked with a move to Barcelona along with his manager, who could be a mainstay in their team for the next decade.