There are some comparisons that you can’t help but make. A colossus Dutch centre-back being linked with a move to Celtic just screams Virgil van Dijk. But for Xavier Mbuyamba, the similarities to the 2018/19 PFA Player of the Year go beyond that.

The 17-year-old MVV Maastricht defender had an eye-catching debut in the Eerste Divisie. So much so that the 6ft 5ins centre-back was on trial with Chelsea, with the 2016/17 Premier League champions interested in adding them to their ranks.

However, their transfer ban could see them miss out and it opens the door to a number of Europe’s elite.

Along with Celtic, Liverpool, Bayern Munich and Porto have shown a strong interest in Mbuyamba. All clubs who have an eye for young talent. All clubs capable of developing him from one of the most exciting prospects into one of the best in world football. 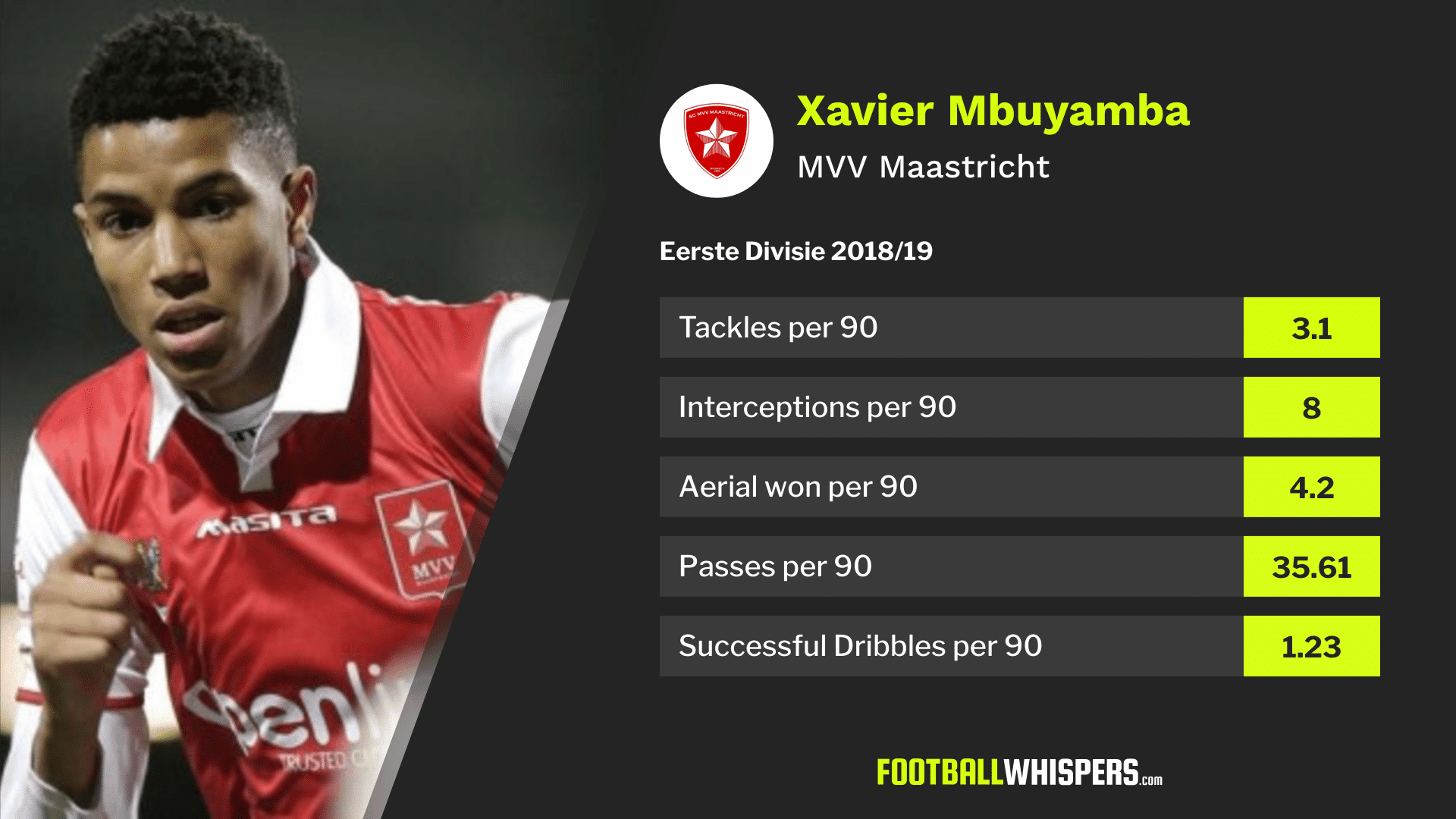 Despite his young age and relative inexperience, he’s played just 401 minutes of first-team football, there’s still a lot to work with. Firstly, he reads the game really well. He often positions himself to win the ball back without having to go to ground. An invaluable asset in the modern game.

The sample size is small, granted, but he’s still winning possession back at an exceptional rate this season. On average, he’s won 3.1 tackles and made eight interceptions on a per 90-minute basis this term.

He’s effective in the air, winning 4.2 of the nine aerial duels he attempts per 90. He’s also comfortable on the deck, too, having averaged 35.61 passes this term, a figure that would likely rise if he made the move to a big club, with most dominant teams seeing north of 55 per cent of the possession.

However, the fact he’s completing 1.23 dribbles shows he’s a player who doesn’t mind having the ball, and seeing more of it shouldn’t be too much of a problem. He can carry it out from the back as well as beating the opposition with passes between the lines.

There’s a lot there for the best managers in the world to work with. A move to Liverpool, Bayern Munich or Porto is perhaps a step up too soon, but Celtic could be an intriguing option for him.

The Bhoys are in need of centre-backs, especially with rumours swirling over Dedryck Boyata's future, and Mbuyamba's physical enough to handle the rigours of the Scottish top flight.

MVV Maastricht coach Ron Elsen recently conceded that the defender's departure is a matter of when and not if.

“He has an amateur contract. So he can be taken over in no time,” he said.

A few seasons at Parkhead, playing in Europe, could see him develop into a player ready for the bigger European sides.

Mbuyamba is definitely one to keep an eye on.