An interesting fact about the 2022 CAF Super Cup final is that the clash will be between Moroccan teams. Our tipsters at Football Whispers have settled on the best free predictions for the game as follows:

This is a Cup final, so expect a hard-fought game from both ends. Most importantly, it will be the fourth cup fixture putting Wydad Casablanca against RSB Berkane. Two of the previous 3 cup encounters had fewer than 3 goals. And given that the last encounter was a deadlocked cup fixture that ended 0-0, another low scoring encounter could be in the offing.

The last encounter between Wydad Casablanca and RSB Berkane was a cup fixture-Coupe du Trone. The duel ended 0-0 in regular time but Berkane won it in penalty shootout. Wydad has a chance to avenge the frustrating loss in this clash. The hosts won four of the last five encounters  with Berkane in regular time. Wydad is our favourite to win the CAF Super Cup final.

The 2022 CAF Super Cup Final will be between Wydad Casablanca and RSB Berkane. Both are Moroccan teams, so either way, the title will still be Morocco’s regardless of the winner of the duel. However, it would interest any soccer fan anticipating this clash to witness how top flight side, Wydad Casablanca, fares against Berkane.

Wydad Casablanca is yet again looking promising as possible contenders for the next CAF Champions League. They are currently top of the Morocco’s Botola Pro 1 2022/23 League after 1W and 1D so far. On the other hand, RSB Berkane is a struggling outfit in the domestic league after two games. The visitors are ranked 12th after 1D and 1L. The recent performance of RSB Berkane threatens their prospects of participating in the Champions League. However, it is still early in the new season to predict much. A good performance in this clash with Wydad Casablanca could be the turning point for the long season ahead.

Here are the possible lineups for the CAF Super Cup finals:

For the highest odds and recent team stats, check the tables below. 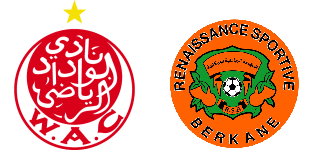 Where will Wydad Casablanca vs RSB Berkane CAF Super Cup final be played?

The game will be staged at Moulay Abdellah Sports Complex in Rabat, Morocco.