The arrival of this CAF Champions League tie gives Kaizer Chiefs a chance to put their poor domestic form in the rear view mirror for a little while. Can they get a morale boosting victory against Wydad Casablanca? Find out with our Wydad Casablanca vs Kaizer Chiefs match preview with free tips, predictions and odds mentioned along the way.

You can say what you want about the strength of the Moroccan league but you can't knock a 13 game unbeaten stretch at any level of football especially when they're winning the fair share of them. By stark contrast, Kaizer Chiefs have not been having the best of times of late. Yes, they have won the last two matches but they've also suffered four defeats in their last 10. Switch to the South African sides away form and things look even worse – they've only won two of 10!

Kaizer Chiefs to give themselves a mountain to climb

In two legged ties, it's imperative you come out of the first match without the tie being over. If Kaizer Chiefs come back from Wydad Casablanca with the semi-final still in the balance then they will have done pretty well by our measures because, in addition to our prediction that Wydad Casablanca will win, we also think they'll do so with room to spare. A look across Wydad Casablanca's last 10 home matches gives a combined score of 22-5. When you consider they beat Kaizer Chiefs 4-0 back in February as well things don't look good for the visitors.

One team will fail to score

Our predictions have been quite clear that we expect Wydad Casablanca to win this match, however, we're keeping our options a little open with this last tip and saying ‘BTTS – No' rather than backing the hosts to record a clean sheet. Kaizer Chiefs have only blanked once in their last five away matches but are far from free scoring with just five goals netted in that period; they've also won one of those five matches to nil meaning two of their last five away have seen at least one team fail to score. Wydad Casablanca have only seen both teams score in two of their last five at home with three clean sheets recorded.

Wydad Casablanca vs Kaizer Chiefs: What are the best odds?

Attacking players to prove the difference

We've made no bones about labelling Wydad Casablanca and it's not only based on the form they've shown compared to that of Kaizer Chiefs, who are struggling in their domestic league down in eight after finishing as runners up last year. Wydad Casablanca also have plenty of quality in their attacking areas; Ayoub El Kaabi has 19 goals to his name whilst Muaid Ellafi has nine goals and 10 assists so far this season. For Kaizer Chiefs, they'll be going into this match without their most creative influence with Lebogang Manyama due to miss out. 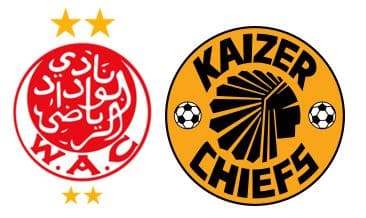