Crystal Palace are reportedly looking to reinforce their forward line when the transfer window reopens in January.

Roy Hodgson’s men find themselves in ninth-place in the Premier League after a positive start to the campaign. They’re just two points shy of fifth-placed Arsenal.

However, goals have been hard to come by. They’ve scored just ten in the 11 matches they’ve played this season, a total only Newcastle United and bottom-of-the-table Watford have failed to equal in the English top-flight.

Their underlying numbers don’t make for easier reading, either. When looking at expected goals, the Eagles are ranked 19th in the Premier League with a total of 11.48. Only Newcastle (7.68) are below them.

Meanwhile, expected points for the season has Palace in 17th position and while the sample size isn’t the largest, Hodgson will want to improve on these figures before their overperformance bubble bursts.

And according to CalcioMercato, Palace are keeping close tabs on Wolfsburg forward Wout Weghorst. The striker has started the season in fine form and already has seven goal involvements in just 898 Bundesliga minutes.

The 27-year-old made the move to the Volkswagen Arena in the summer of 2018 in a deal worth £10million. Since then, the Netherlands international has struck 22 times and assisted nine goals in the German top-flight, proving himself to be a shrewd signing.

After being a standout performer during his debut season with Die Wölfe, Weghorst penned a new deal in June, extending his stay with the club until 2023 while simultaneously increasing his value to the club. If he does leave the Bundesliga in January, he isn’t going to be cheap.

Fortunately for Palace, they’re flush from selling Aaron Wan-Bissaka in the summer. That isn't to say the Eagles should break the bank to land the former AZ Alkmaar man, but if they're serious about adding potency to their forward line then he's definitely someone they should look at. 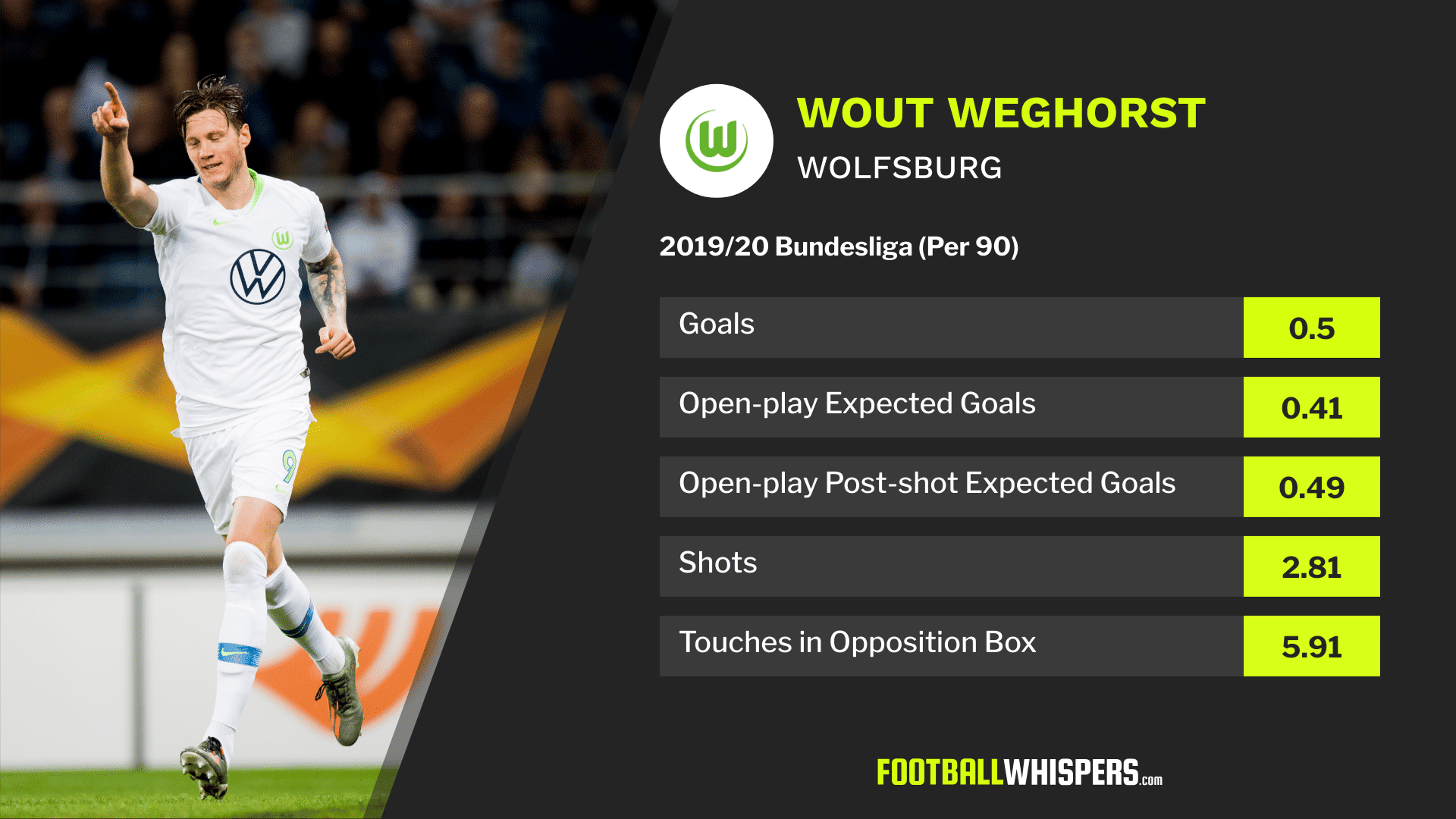 Looks can be deceiving in football and the 6ft 4ins forward looks a traditional target man. He looks like he should bully opponents and thrive off aerial balls into the penalty area. And while he does put his presence to good use at times, he's actually an intelligent player who uses brains rather than brawn.

A number of his goals appear to be tap-ins but they only come about because he manages to carve out pockets of space in the penalty area. In fact, all of his goals this season have come from inside the box and none have been headers.

Furthermore, Weghorst is adding value to his shots this term. In terms of expected goals, he's averaging 0.41 per 90, more than Jordan Ayew (0.37) and Christian Benteke (0.13). But his post-shot expected goals average, which looks at where the shot is taken from and where it lands on target, shows he's adding 0.08 to his efforts. It seems minimal but over the course of a season that adds up to an extra three goals.

For context, both Ayew and Benteke are devaluing their efforts with their post-shot averages being inferior to their expected goals averages. Having a clinical finisher can be the difference between a draw and a win. A push for Europe and a mid-table finish.

Weghorst isn't a player who relies on volume. He's averaging the most shots per 90 of the three mentioned but all are having just north of two efforts per 90. So it isn't like he'd move to Selhurst Park and all of a sudden be taking noticeably fewer shots which then impacts his other stats. Likewise, with the touches in the penalty area, the Netherlands forward is averaging over five, just as Benteke and Ayew are.

Palace don't play an identical style to Wolfsburg but that doesn't mean Weghorst has to dramatically adapt his game to fit in. He can still do what he does while doing it well. It's why the Eagles should be willing to spend £30million on the 27-year-old.