Manchester United have grown increasingly dependent on 35-year-old Michael Carrick in recent weeks, as the experienced midfielder has helped the Red Devils turn their form around and mount a serious push to break into the top four.

But with Carrick’s advancing years in mind, manager Jose Mourinho is reportedly anxious about ensuring that his side are adequately equipped to cover for the former Tottenham Hotspur player were he to get injured or burned out, and the Portuguese coach could turn to a familiar face in the shape of Lassana Diarra to bolster his defensive midfield options.

French journalist Khaled Karouri of Foot Mercato reported last night that United have made contact with Marseille over the possibility of signing Diarra during the current transfer window, and the Football Whispers Index is rating the potential transfer at 1.3 out of five. 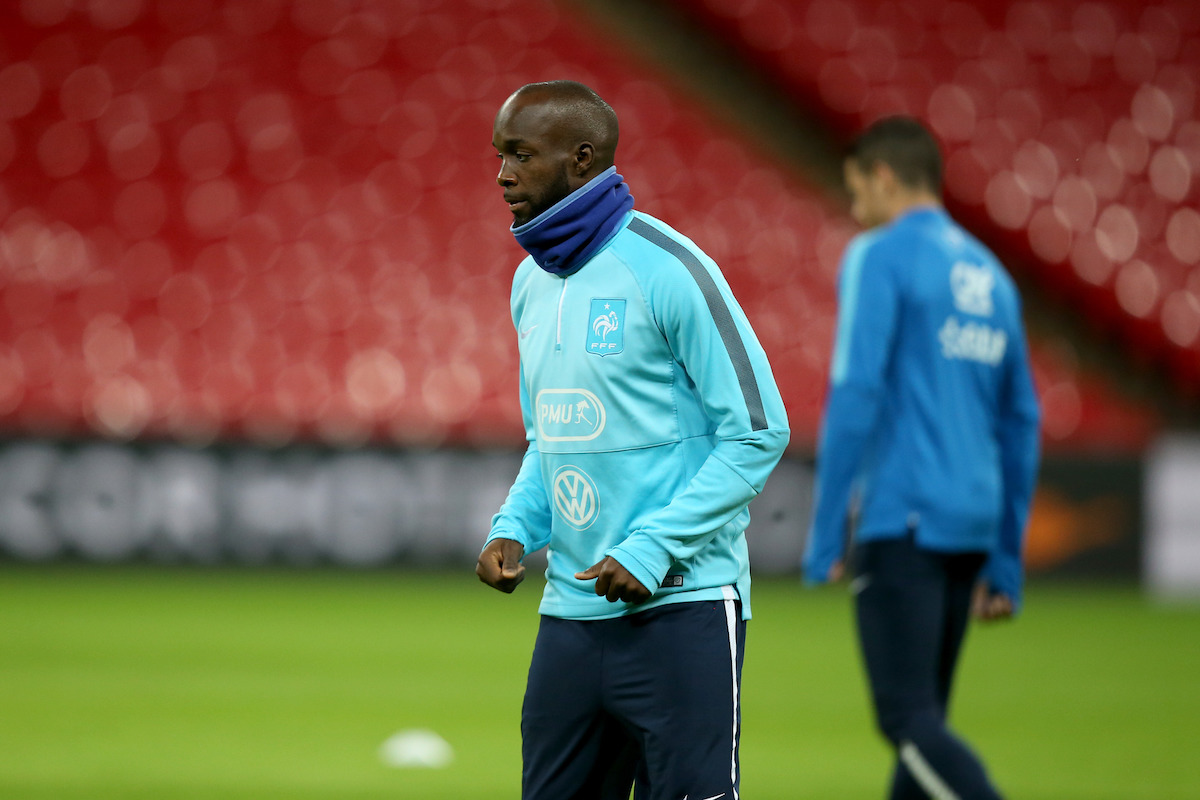 The 31-year-old, who has spent most of his career playing outside of his native France, worked under Mourinho at both Chelsea and Real Madrid. The connection between the two has fuelled speculation that Diarra moving to Old Trafford could be a distinct possibility.

Mourinho signed the Frenchman for Chelsea in the summer of 2005, although the then-20-year-old midfielder only made seven appearances in his first season at Stamford Bridge, and Mourinho parted ways with the Blues early in the following campaign.

Having endured an inauspicious season with Arsenal in 2007-08, Diarra moved to Portsmouth where he finally began to deliver on the promise shown in his early career with Le Havre. His 32 appearances for Pompey caught the attention of Real Madrid, who snapped up the combative midfielder on 1 January 2009 for €20 million. 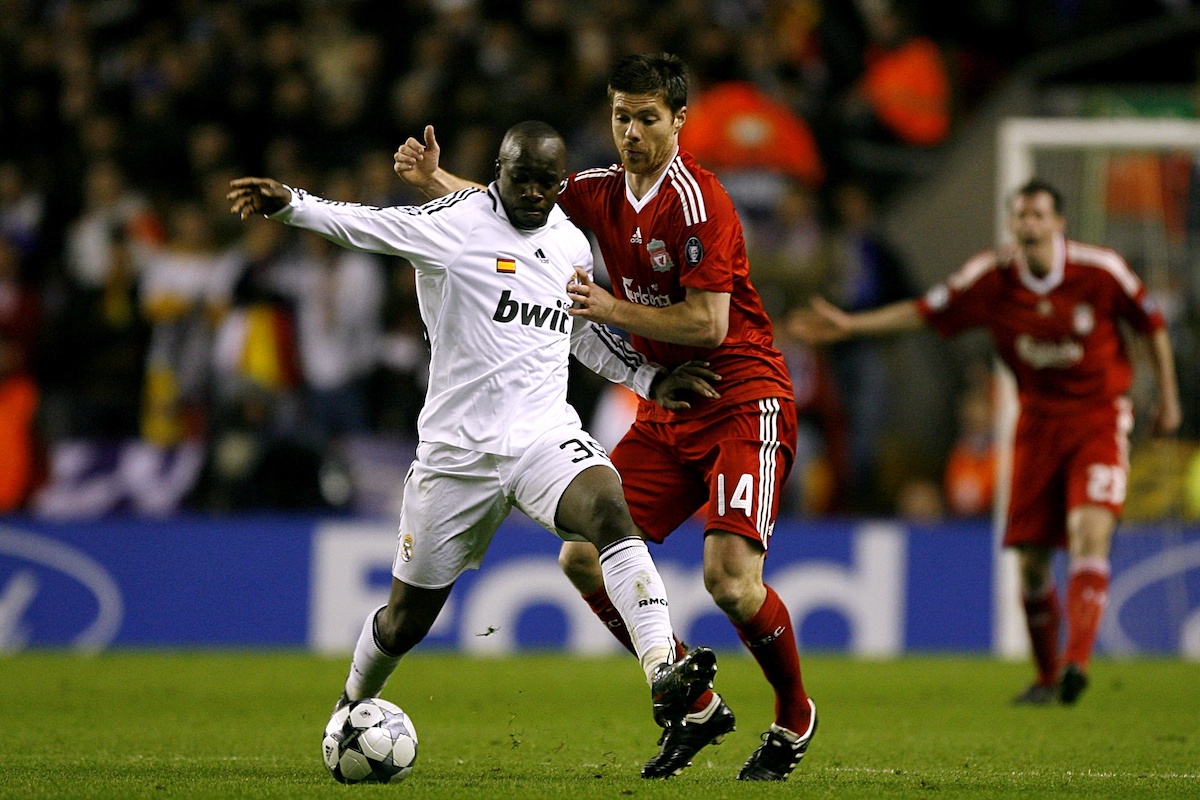 And ahead of his second full season with the Spanish giants, Diarra was re-united with Mourinho, who’d left Treble-winning Inter Milan to take the reigns at the Bernabeu.

Mourinho utilised Diarra’s physicality and positional awareness to great effect during their first campaign together in Madrid, deploying the French international at the base of midfield to break up play and shield the back four, giving greater freedom to the likes of Mesut Ozil, Angel di Maria and Cristiano Ronaldo further up the pitch.

After making 39 appearances for Madrid in 2010-11, Diarra’s involvement was reduced the following term, seeing him turn out just 25 times in all competitions as Los Merengues romped to the league title, collecting a record number of points (100) and scoring a record number of goals (121) as they left Pep Guardiola’s Barcelona in their wake.

In his controversial exposé of Mourinho’s time in charge of Real Madrid, The Special One: The Secret World of Jose Mourinho, Spanish journalist Diego Torres claimed that the coach’s relationship with Diarra deteriorated during the title-winning season, with the player supposedly refusing to play for Mourinho.

“Mourinho wanted to take him [Diarra] to Los Angeles [for a pre-season tour] because he appreciated him as a player,” Torres wrote. “Lass refused to go, saying that he did not want to spend any more time under Mourinho’s charge, and that he had warned him months earlier that he hoped he would be allowed to leave.

“When Mourinho continued to insist that he join up with the squad and did not stop calling him, Lass told him where to go with a string of insults, turned off his mobile, ordered his agent to do the same and disappeared for a few days, presumably to Paris.” 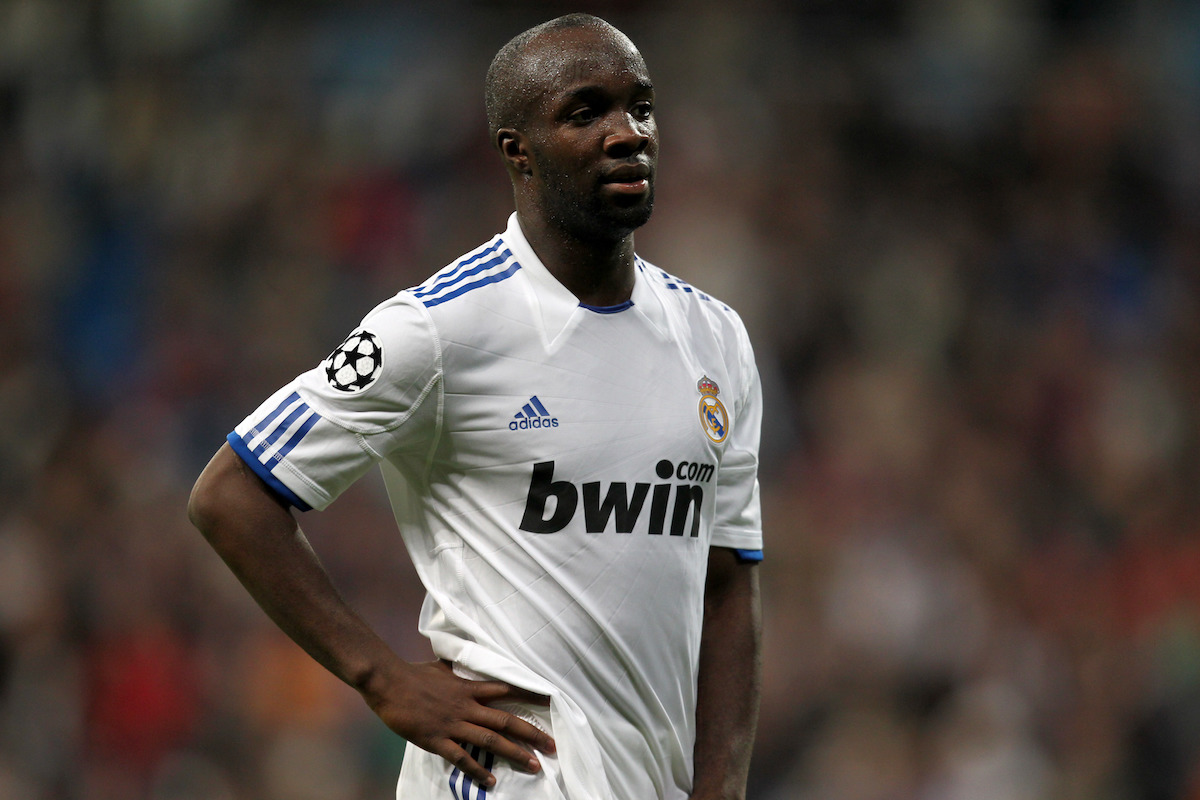 Diarra was sold to Anzhi Makhachkala on 31 August 2012 for an undisclosed fee.

Throughout his managerial career, Mourinho has favoured bringing in players he has previously worked with when he joins a new club. At Chelsea, it was Paulo Ferreira and Ricardo Carvalho, with the latter also joining Mourinho in Madrid; Zlatan Ibrahimovic was one of his first signings for Manchester United after working with the Swedish striker at Inter.

But if there is any truth to Torres’ claims, then it would seem unlikely that Mourinho would be keen to work with Diarra again after the player’s supposed unprofessionalism at the Bernabeu.

A good fit for United?

With Morgan Schneiderlin set to seal a move away from Old Trafford this winter, and with Bastian Schweinsteiger likely to follow him through the exit door if a suitor for the German is found, United will be short of cover for Carrick.

Daley Blind is capable of operating in the deep-lying playmaker position within the Red Devils’ preferred 4-3-3 formation, and Ander Herrera has also occupied that role several times this term.

But with Blind featuring regularly at left-back and Herrera required in a more advanced role, it would make sense for Mourinho to seek a back-up option this month, even if it’s just a stopgap solution until the summer.

Mourinho spoke of his desire to sign “specialists”, rather than versatile squad players, in his first press-conference as United manager in June, and Diarra is a specialist defensive midfielder. Much like Claude Makelele, with whom Mourinho enjoyed great success during his first spell at Chelsea, the former Portsmouth and Arsenal man’s skill set is ideally suited to protecting the defence, breaking up opposition attacks, and getting the ball to his more technically gifted team-mates. 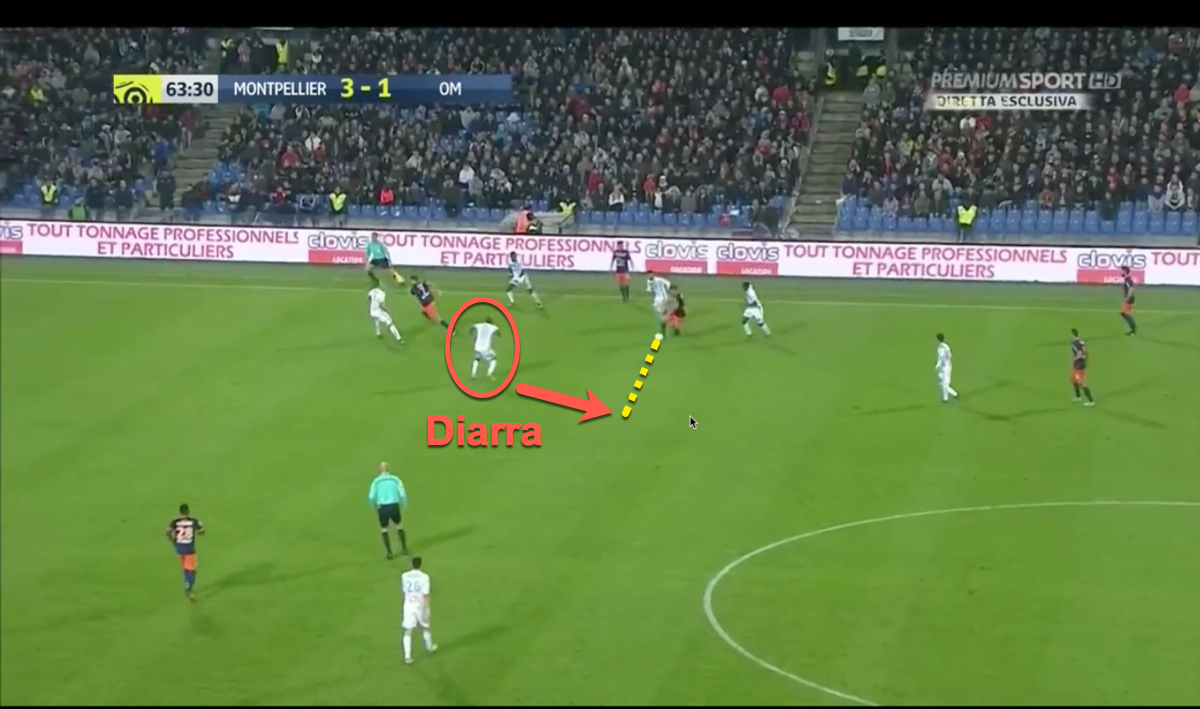 In this respect, he differs from Carrick somewhat. Though they both play in the same position, Carrick is a much more astute passer than Diarra, and has made his name by dictating play from deep, speeding up and slowing down the tempo of matches as necessary and playing accurate vertical passes to instigate attacking moves.

By contrast, Diarra is a destroyer, more adept at stifling the opposition than Carrick, but not able to control the ebb and flow of a game in the way the Englishman does so expertly. This may make him somewhat unsuited to being a direct deputy for Carrick, but it does, however, make him more an archetypal ‘Mourinho player'.

Almost everywhere he has managed, Mourinho has prioritised having a defence-minded anchor at the base of his midfield, rather than operate with a playmaker in the mould of Andrea Pirlo or Marco Verratti.

At Porto it was Costinha; In his two spells at Chelsea, it was Makelele and Nemanja Matic; at Inter it was Esteban Cambiasso and Diarra played that role for Mourinho at Real Madrid.

That’s not to say that Diarra can’t pass the ball, though. His 88.6 percent pass accuracy for Marseille this season is below Carrick’s (90.5 percent), but better than Schneiderlin (86.7 percent), Herrera (88.3 percent) and Paul Pogba (88 percent). 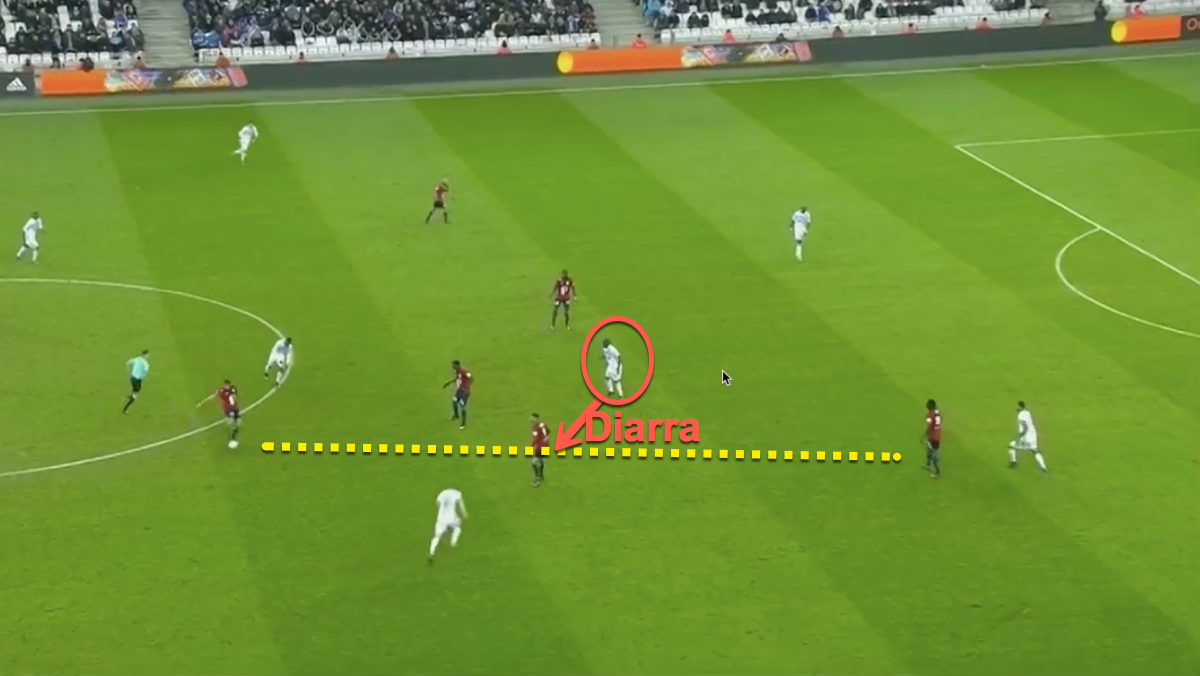 And although Diarra may opt for the safe option more often than not, he has still averaged the same number of key passes per game (0.3) and long balls per game (3.7) as Carrick.

Diarra does, however, tend to make significantly fewer passes per game than Carrick, with 47.2 to the United star’s 65.7. This is indicative of the difference in style between the two men, although the large disparity is perhaps explained by the differing playing styles of Marseille and the Red Devils — both are currently sixth in their respective divisions but l’OM average 53 percent possession and 11.2 shots per game, while United average 55.5 percent possession and are more adventurous with 17.1 shots.

Defensively, Diarra’s physical, all-action style is evidenced by the fact that he is averaging 3.8 tackles per game this season to Carrick’s 1.4. In fact, Diarra’s tackling average is better than every United player — Herrera and Ashley Young are next best with 2.5.

In terms of interceptions per game, Diarra’s 1.8 average sees him rank behind Carrick (2.8) and Herrera (3.1), but is equal to or better than every other United midfielder.

One additional factor to consider is that the 34-cap Les Bleus midfielder is an international colleague of Paul Pogba. Diarra’s familiarity and chemistry with United’s world-record superstar could allow him to seamlessly slot into the Red Devils’ midfield and help augment the former Juventus player’s immense talent.

French newspaper L’Equipe claims that Marseille have offered Diarra to West Ham as part of a big-money bid to entice Dimitri Payet back to the Stade Velodrome.

The Hammers are reportedly unwilling to consider offers for their most important and creative player, and the prospect of Diarra moving to the London Stadium is unlikely to persuade them to alter their stance. 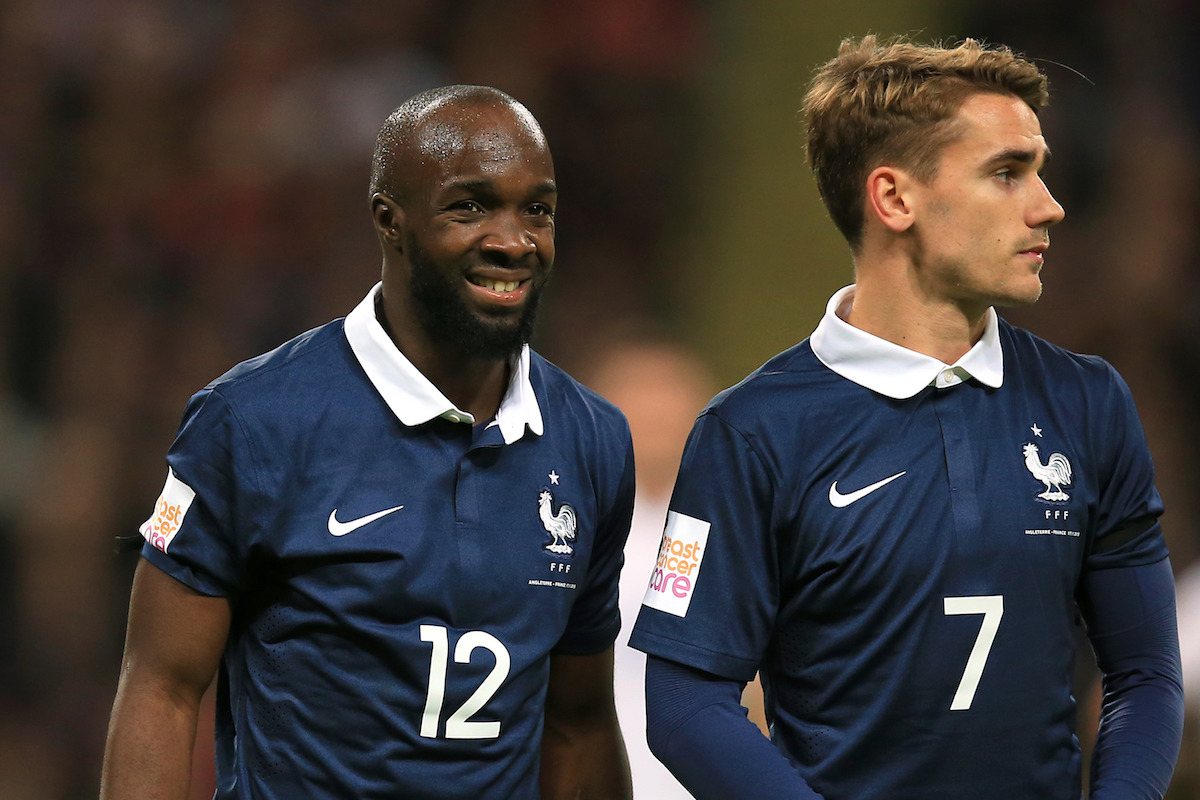 From a purely footballing perspective, there are reasons to believe that United would be interested in a low-cost, short-term deal for Diarra.

But with the player having been stripped of the Marseille captaincy by new manager Rudi Garcia in October — the French coach questioned the midfielder’s commitment and gave the armband to loanee Bafetimbi Gomis — these rumours could be a creation of the player's agent, in the hope of stirring up interest in his unsettled client.