Monaco were one of the most entertaining sides in European football throughout the 2016/17 season, thrilling the masses with their swashbuckling attacking style.

English clubs didn't hesitate to target their players, feeding of the success of the Ligue 1 champions. Kylian Mbappé quickly became a transfer target for Arsenal, Real Madrid and Paris Saint-Germain. Thomas Lemar and Benjamin Mendy also rumoured to be on club's shortlists.

With Manchester City's move for the French left-back stalling due to Monaco holding firm for a big offer, the door has opened for the Gunners to make a offer for right-back, Djibril Sidibé.

Héctor Bellerín, a long-term Barcelona transfer target, looks to be keen on a return to the Catalan club, with The Mirror suggesting his agent is in talks with their representatives.

Arsène Wenger would then need a replacement on the right of his defence, be it at right-back of a 4-2-3-1 or the 3-4-3 that sparked an exciting end of their campaign and the FA Cup final win over Chelsea.

The French right-back joined the Monégasques from Lille for a transfer fee of around £13million last summer, reportedly shunning Arsenal in the process. However, if recent reports are to be believed, the Gunners were unperturbed by the purported knock-back.

Now, after speculation already linking him with a move to England, the defender spoke to the media while on international duty and didn't rule out a transfer this summer.

“Firstly, I'm focused on France and then I'll give myself some time to think about offers and all the factors running through my brain a year before the World Cup,” he said, via ESPN.

“Leaving for leaving's sake doesn't interest me. You've got to be happy at Monaco. We finished first, we have the Champions League and I know the coach perfectly. But there are certain offers you can't turn down… but I'll have the time to think about that afterwards.”

Outwardly, the signing of Sidibé would appear a way of replacing the outgoing right-back. But would the Frenchman be an upgrade in this position?

How Much Is The Spain U21 Squad Worth… by FootballWhispers

Bellerín’s form was questioned at times last season. Defensively, he appeared suspect, something hinted at statistically by the fact he has averaged fewer tackles and interceptions per game compared to the 2015/16 campaign.

He was also comparatively less productive in an attacking sense, contributing four assists compared to five in 2015/16, and completing fewer dribbles per game. By contrast, Sidibé’s star has been on the rise throughout this campaign.

Monaco’s attacking and counter-attacking game is often wing-oriented, with plenty of emphasis on the full-backs – also including the left-sided Benjamin Mendy – to attack their respective flanks and supply quality balls for the strikers, particularly Radamel Falcao, to finish. Indeed, only one Ligue 1 team – Caen – have put in more crosses than the 25 per game averaged by Leonardo Jardim’s outfit.

With this in mind, the technical, tactical and athletic capacity of Sidibé has been integral to his side’s overall strategy in most matches. His energy allows him to patrol the touchline and make overlapping runs, while his crossing – while perhaps not as accurate as his left-sided team-mate – is effective.

His combination with Portuguese winger Bernardo Silva down Monaco’s right-hand side was integral to the team’s penetrative attacking. By attacking or simply occupying the right flank, Sidibé allows his left-footed team-mate to move inward and take up more central spaces from where his close control, dribbling and vision can trouble opposition back lines.

Wenger’s desire for attack-minded full-backs has been an unwavering commitment throughout his tenure at Arsenal, and that doesn’t look likely to change with the recent switch in formation from the more conventional 4-2-3-1 to a 3-4-2-1 shape perhaps inspired by Antonio Conte’s title-winning Chelsea side.

Assuming Bellerín were to move on in the summer, Sidibé would be a sound successor. While two years the Spaniard’s senior, he has plenty of upside and is arguably a more consistent and stable all-round performer as it stands. 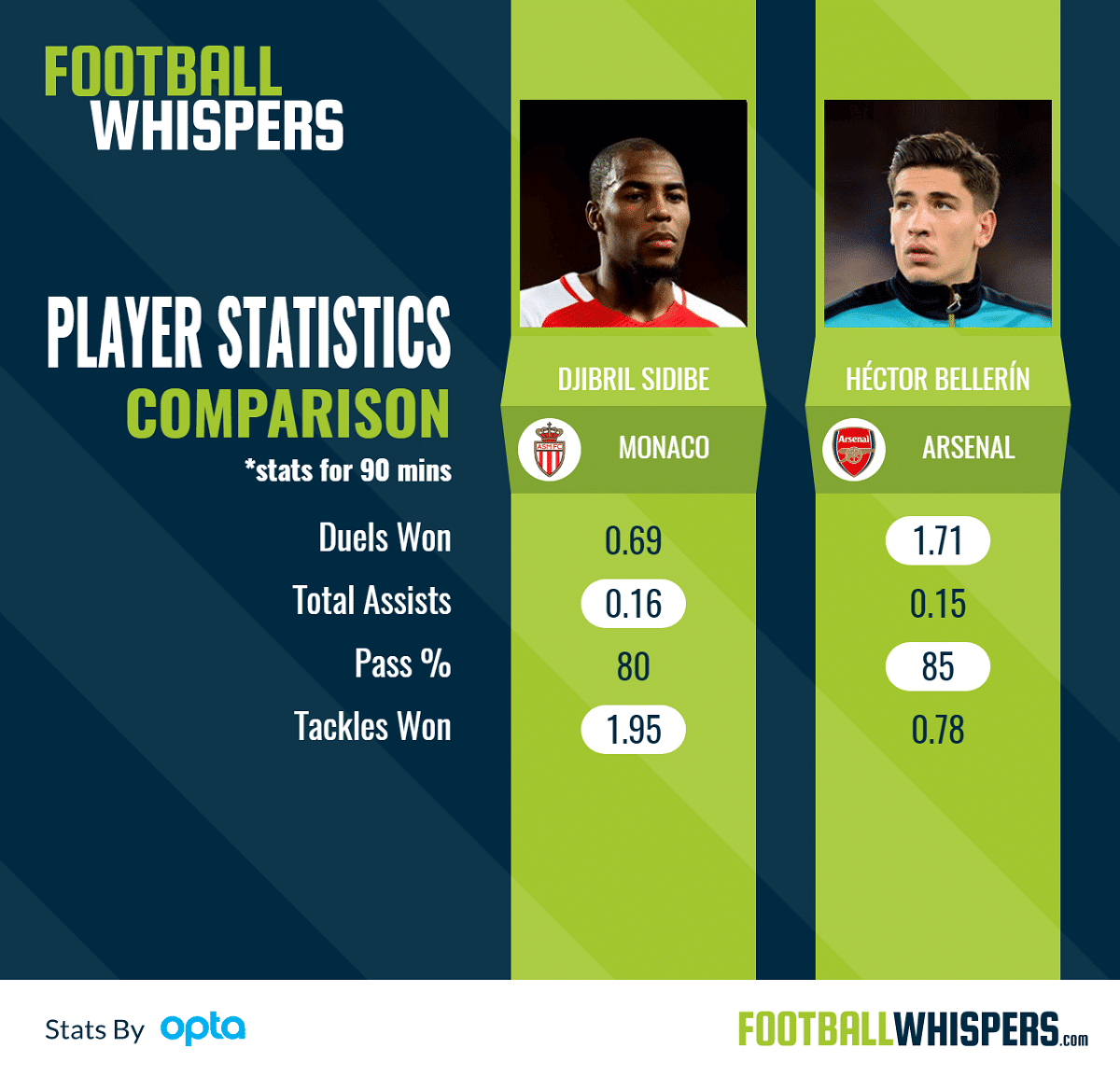 While the incumbent Arsenal right-back wins more duels on average and has a higher pass completion rate, the Monaco man contributes more assists and wins more than twice as many tackles per 90 minutes.

In the attacking phase, Sidibé would support build-up well, holding a wide position and occasionally coming backward or inside in order to ensure safe progression of the ball. And, in the defensive phase, he is quick to press.

An additional benefit of the seven-cap France internationalist’s game, however, is his ability to alternate between the right and left flank.

Sidibé has frequently featured in the left-back position for Monaco this term, playing well enough to suggest that – while this is not his natural side – he is more than able to fill this role.

There are some noticeable tactical differences to his game on the opposite touchline, namely his being more inclined to drive inward rather than overlap on his weaker left foot, but he nonetheless remains an astute full-back. 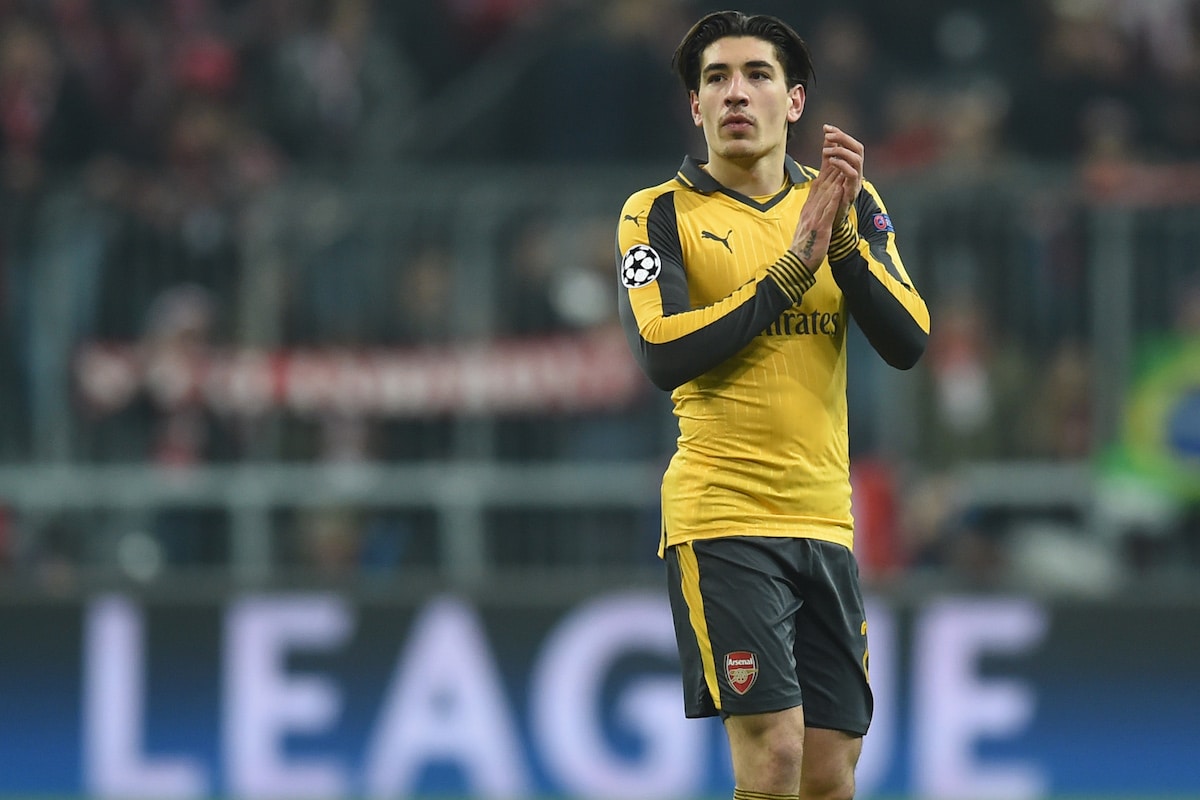 While Sidibé would be a fine replacement for Bellerín should the Arsenal star move on this summer, calling him an upgrade is, at best, a short-term assessment. With the arrival of Sead Kolasinac from Schalke, the Bosnian will take over at left wing-back, but he can also play on the left of a back three.

That would open up the possibility of the Frenchman bursting on the left-flank with the mobile Kolasinac covering behind him, something that is very much needed when Sidibé is asked to defend.

The Frenchman is somewhat of a liability in a back four, one of the reasons Monaco eventually came up short in the Champions League, but in the 3-4-3, you are playing to his strengths and that's what would make Sidibé an upgrade, rather than just a replacement for the want-a-way Spaniard.