This was not the plan for Everton or Ronald Koeman. Long the envy of the Premier League for the way they recruited despite having a restricted budget, the Toffees were emboldened by a £140million refurb this summer.

Not included in that splurge was a proper No.9. The arrival of Sandro Ramírez from Malága looked a shrewd bit of business – reminiscent of the Everton of old – but the Spaniard is a rookie in England.

Koeman will argue he did not get the man he wanted. Everyone knew Arsenal hitman Olivier Giroud was an Everton transfer target. The French forward would have led the line well for the Merseysiders, even if he lacks the pace they so desperately need.

That has left Everton with a handful of out-and-out strikers, all of which have question marks against them.

But things have become so desperate that the forward, who joined from Lokomotiv Moscow in January 2015, has been brought back into the fold after being banished from the first team by Koeman.

Niasse was so out of the picture he didn't have a locker in the first-team changing area at the club's Finch Farm training HQ and was even left without a club suit. He made a point to Koeman, however, by coming off the bench last weekend to score twice and give his manage an invaluable 2-1 win over Bournemouth.

But on Sunday the Toffees saw normal service resume, firing a blank in a 1-0 home defeat by Burnley. The result was met with a chorus of boos and Koeman immediately ducked down the tunnel after shaking opposite number Sean Dyche's hand.

Expectation has been raised by the investment in the squad which, even with the loss of Manchester United, stacks up as one of the biggest summer spends in the Premier League.

So how do Everton's forwards compare statistically? Damningly, it is Niasse who comes out on top. The Senegalese forward was handed his first Premier League start since May 2016 for the Clarets' visit but could not repeat his heroics of the previous weekend. 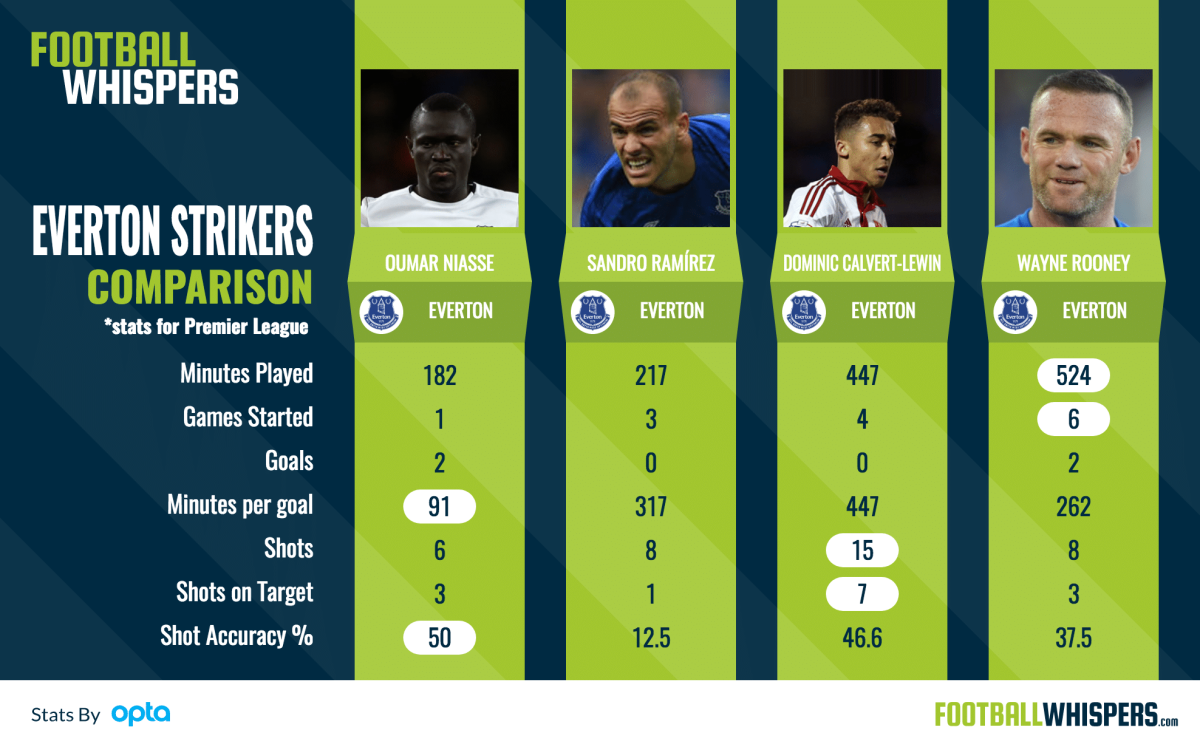 However, the 27-year-old still comes out on top compared to his striking peers. Sandro is yet to open his account in the league for his new club while Calvert-Lewin, who has started regularly, has also failed to find the back of the net.

Wayne Rooney's two goals, both of which came in the opening fortnight of the season, mean he is tied with Niasse. But the former England captain has only been filling in up front with the general consensus he can no longer cut it as a Premier League No.9.

What will be of most concern for Koeman is the startlingly low number of efforts his players are hitting the target with. If you don't buy a ticket to the lottery you can't expect to win and the Toffees are keeping their wallet firmly in their pockets.

Most worrying is the form of Sandro. The former Barcelona prospect has hit the target just once in this season in three starts. Niasse has already bettered that having played nearly 40 minutes fewer.

Koeman will attempt to rectify the failure to land a Lukaku replacement in January – if he is allowed to remain at the helm until then.