Portugal are one of several teams at this World Cup who have to build their team around one of the world’s best players.

André Silva is Portugal’s ‘other man’, the one who will likely line up next to Cristiano Ronaldo in Russia. Next to such a star, he might fly under the radar – he’s arguably not even the most famous Silva in the squad either – but he’s proven himself for his country.

On club form he might struggle to get a call-up after a slow debut season for Milan, but his nine goals in qualifying has secured his place on the plane.

The Wolverhampton Wanderers transfer target started his professional career at Porto, making his debut in December 2015, shortly after his 20th birthday. 2016/17 was his break-out season, getting regular game time under now-Spain manager Julen Lopetegui, scoring 16 in the equivalent of 27.3 league games (2456 minutes).

He is a pure striker whose goal reels almost solely consist of finding a gap between defenders and finishing within a few touches.

Moving to Milan has seen a change in his all-round output, with chance creation characterising his play a little more than at Porto and dribbling a little less.

Silva’s quite traditional game as a striker fits into a Portugal side where Ronaldo is more involved in play than at Real Madrid.

Looking at the relationship between a striker’s accurate passes and touches made in the opposition box, Ronaldo is more of a pure forward for Madrid. There, in 2017/18, he made 2.5 passes for every touch inside the opposition box, whereas in qualifying for Portugal this figure was 4.5.

Silva’s figure was 2.6 during qualification, similar to his 2.4 last season at Porto. In Serie A for Milan, he made 3.2 passes per touch in the opposition box, again pointing to his slight change in role.

Perhaps due to this change in role, Silva’s 2017/18 at club level was underwhelming. He scored just two goals in the league for Milan as a near-permanent substitute, behind Nikola Kalinić and Patrick Cutrone in the pecking order.

However, he was something of a ‘cup striker’, appearing far more regularly in the Europa League. He got six in ten appearances, but five of these came in two group stage thrashings of Austria Wien. 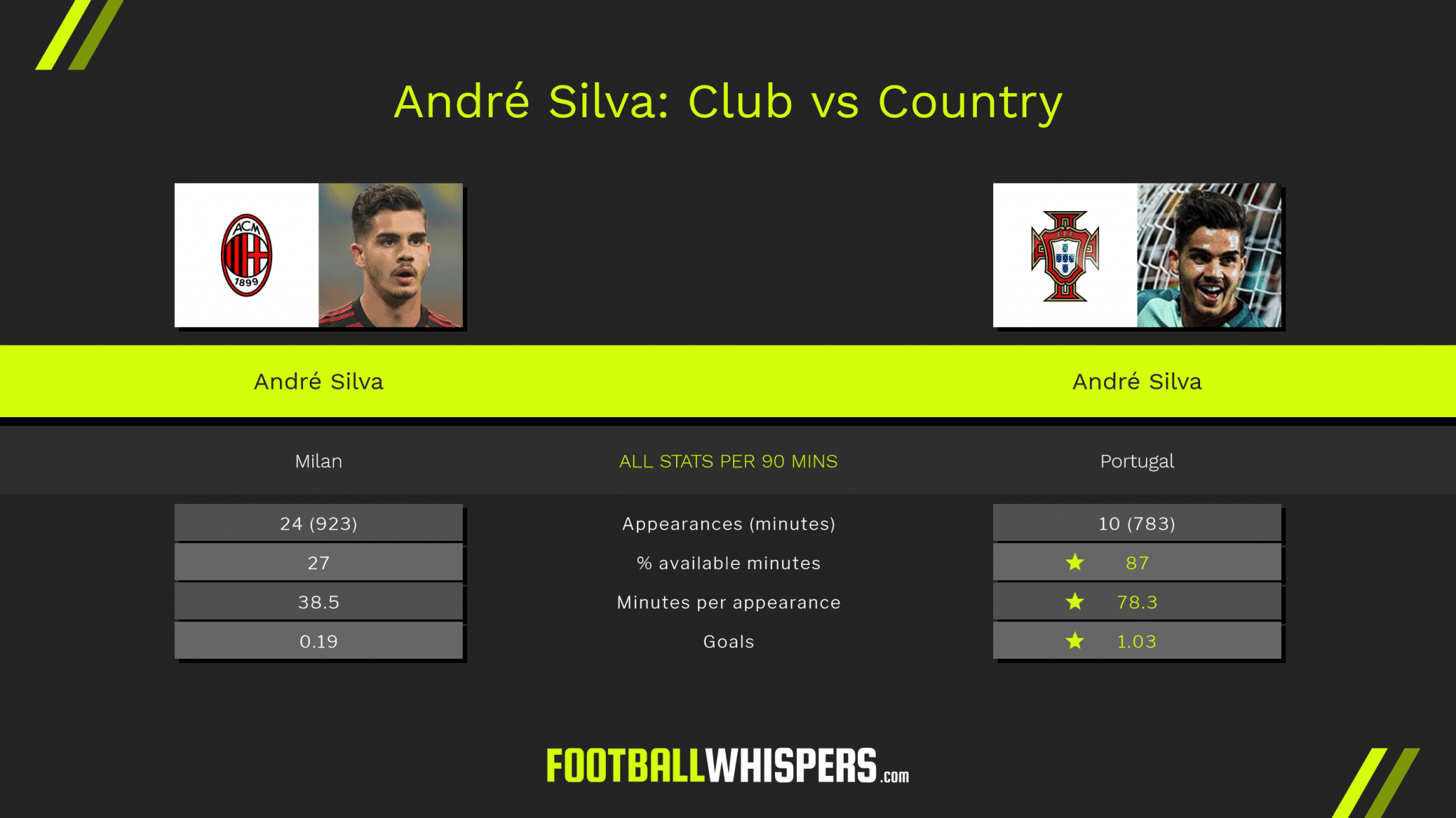 Manager Gennaro Gattuso said in May that Silva needed to take his chances in the first team and work harder to prove he deserved them.

“When I give him opportunities, he has to make the most of them,” he said. “The talent is undeniable, but he needs to do more.

“Players have to let themselves be helped. If you don't train in a certain way because you think you won't play, you have to do more in the week to show why you deserve to play.”

This couldn’t be further from his performances for Portugal. His nine goals in qualifying may have been behind Ronaldo, who got 15, but it was still the eighth-highest total across all confederations.

Why Silva will make an impact at the 2018 World Cup

As well as having a strong side, Portugal have the possibility of a nice route to the later stages of the competition.

A group of Spain, Morocco, and Iran should see them through to the round of 16 fairly easily, where they will likely meet either Uruguay or Egypt. After that, a quarter-final against France or Argentina seem the most probable scenarios. If Portugal perform competently, they shouldn’t have broken much of a sweat to get there.

Silva will be part of this journey of the European champions. With Ronaldo being certain to draw the attention of the opposing defenders, this should help create more holes for Silva to slip into.

All eyes will be on CR7, but if Portugal progress to the later stages of the tournament, expect Silva to have popped up with a few goals.