The 1998 World Cup final was supposed to signify the coronation of a new Boy King, placing Brazilian striker Ronaldo at the summit of the game, assuming his place among the pantheon of the greats at the culmination of a tournament in which he'd shone as brightly as everyone had hoped.

Instead, pre-match favourites Brazil slumped to a 3-0 drubbing at the hands of France, the host nation. The game that was supposed to springboard the 21-year-old Ronaldo into the stratosphere cruelly turned out to be the first guttural blow of an unrelenting four-year cycle of setbacks.

Redemption would come, gloriously, in 2002, but the road there was long and arduous.

Ronaldo had inexplicably suffered a convulsive fit hours before the '98 final at the Stade de France, and, perhaps even more inexplicably, was still sent out to play, despite being omitted from the initial team-sheet. Of course, his performance was severely affected, a passenger in the machine he had driven at full speed toward what appeared to be Brazil's destiny.

Upon retuning to his club, Inter Milan, he went on to make just 25 all-competitions appearances over the next four seasons, cut down by two severe, career-threatening knee injuries. 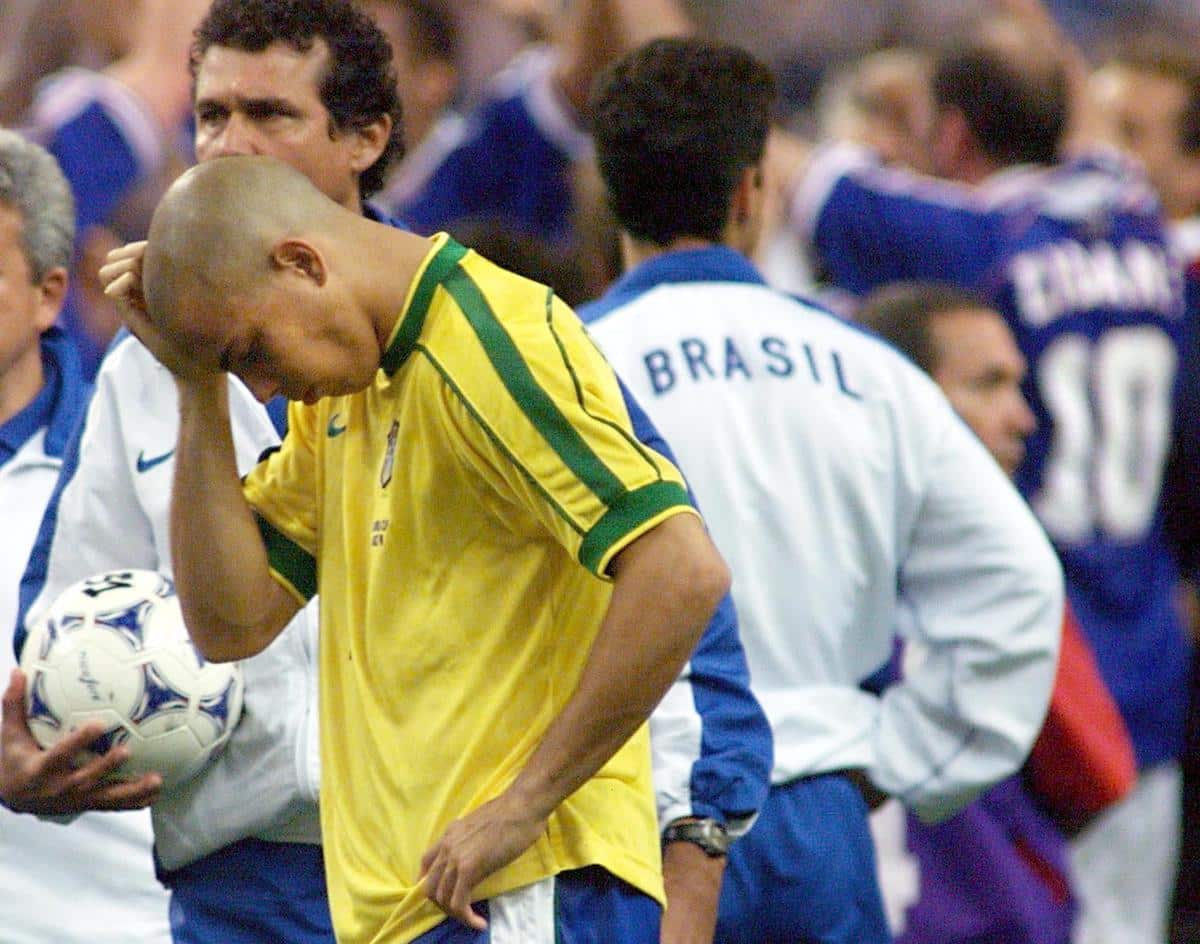 Previously a player of breathtaking explosiveness, with perhaps the quickest feet the game had ever known, there were serious doubts over whether the man nicknamed ‘O Fenômeno‘ would be able to recover the gifts that made him so special. If he could recover at all, that is.

That, then, is why, upon clawing his way back to fitness for the closing stages of the 2001/02 season, scoring seven goals in ten Serie A games, he was still only considered a 16/1 outsider in the running for the Golden Boot award at that summer's World Cup in Japan and South Korea. And the Brazil team as a whole were deemed a pale imitation of the sides which had reached the last two finals of football's foremost competition.

But Ronaldo wasted no time in reminding the world of his brilliance. In Brazil's opener against Turkey, the striker demonstrated his athleticism, still intact despite all the injuries, by stretching to poke home Rivaldo's cross from the left in a 2-1 win for the Seleção.

Physically, he had changed – he was now set a little heavier and his magical bursts were shorter, confined to smaller spaces than previously – but this was unmistakably Ronaldo, back when there was only one. The trademark gap-toothed smile beaming, arms spread wide in celebration: Ronaldo the Redeemer had arrived.

By the end of the group phase, Brazil with a maximum return of nine points and their No.9 having plundered four goals, the odds on Ronaldo claiming the Golden Boot were tumbling, and the men resplendent in yellow looked the team to beat.

Belgium were dispatched in the last 16, Ronaldo again on the scoresheet, this time with a tidy left-footed finish through the goalkeeper's legs. England, Brazil's next victims, earned the consolatory distinction of being the only side to prevent the rejuvenated striker matching compatriot Jairzinho's feat of scoring against every opponent in a single World Cup, which he had achieved in 1970.

Rivaldo and, infamously, Ronaldinho, via a lofted free-kick before later being sent off, did Brazil's bidding against the Three Lions – although the gravitational pull of Ronaldo's mere presence, once again striking deathly fear into opposing defenders, serviced his cohorts with additional space in which to work.

On to the semi-finals, that stage upon which Ronaldo scored his finest goal of the 2002 World Cup, putting group opponents Turkey to the sword once more. It was in this fixture that the former Barcelona forward proved his boots were still sprinkled with stardust, and that he was not now purely a penalty-box finisher.

Picking up the ball wide on the left, 30 yards from goal, he spun inside his marker, gliding into the penalty area, before finding the corner of Rüştü Reçber's goal with an impudent toe-poke.

Commentating on the game for the BBC, John Motson proclaimed: “Every World Cup needs a hero, and Ronaldo is one here.” 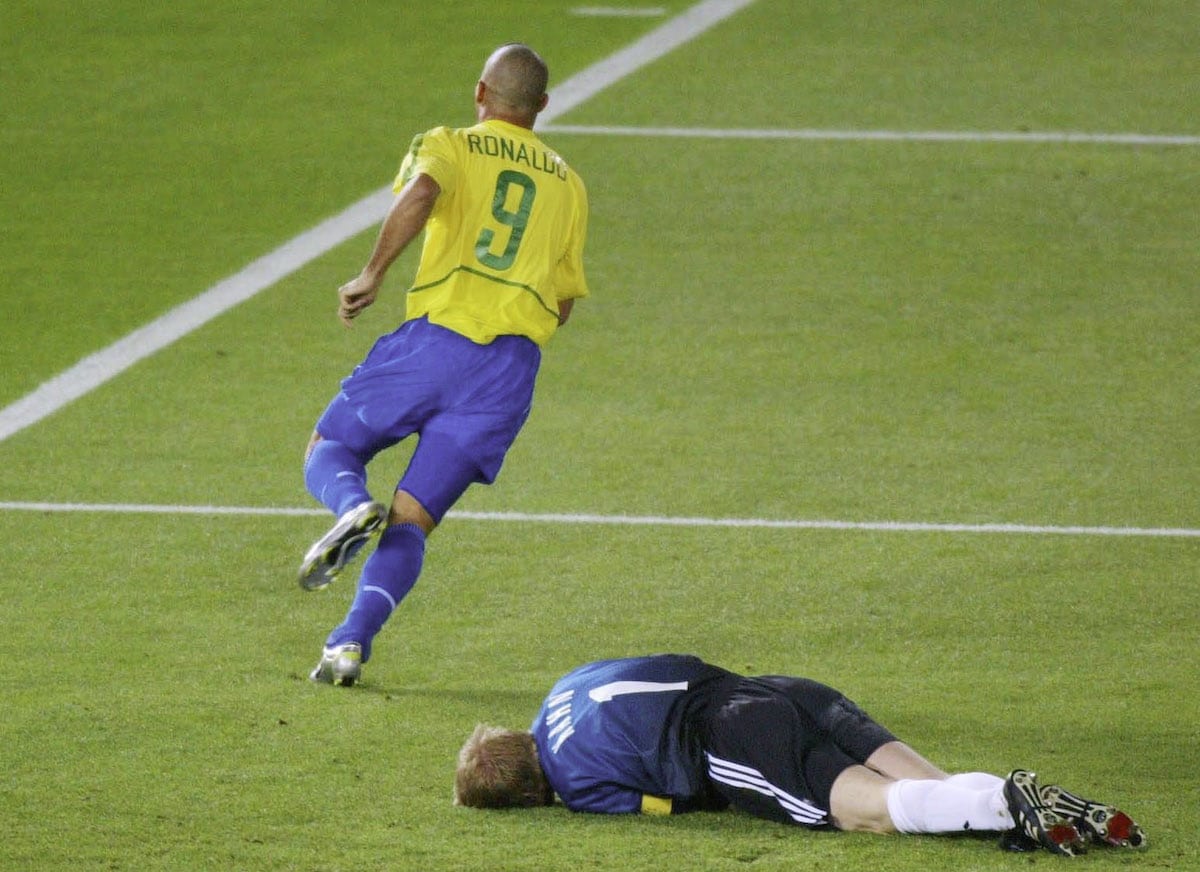 That strike was enough to secure a 1-0 victory, booking Brazil's place in the final, where they would face a functional and dangerous Germany, although Die Mannshaft would be without Michael Ballack, their inspirational midfielder suspended.

As the players took to the pitch for the final at Yokohama's International Stadium, Ronaldo's appearance was yet again the headline point of discussion. However, this time it was not a gaunt and shaken demeanour that singled out the gifted Brazilian, but rather an outlandish new haircut, with his head completely shaven but for an irregular triangle shape at the front.

Most thought little more of it than simply Ronaldo being Ronaldo, the notoriously party-loving free spirit deciding to have some fun with his latest clippered coiffure. But the now-retired superstar claims there was more to it than that.

“My groin was hurting. I was only at 60 per cent. So I shaved my head,” the legendary striker confided to ESPN Brasil last year. “Everybody was only talking about my injury. When I arrived in training with this haircut everybody stopped talking about the injury.”

As he stood shoulder-to-shoulder with his team-mates while the anthems of both nations played, Ronaldo breathed in the tension, the atmosphere and the expectation.

The 25-year-old had been through an unimaginable ordeal which had almost cost him his livelihood, nearly robbing him of his dreams. He surely could not help but think back to four years earlier, to that moment of opportunity lost through crushing happenstance, to his status as the undisputed greatest in the world usurped by Zinendine Zidane's brace.

It had all come down to this. These are the moments that make a man, that define careers and separate mere mortals from the celestially chosen. Destiny had evaded him four years earlier; he wasn't about to let it escape a second time.

With two goals – pouncing on a cruel Oliver Kahn error for the first and confidently side-footing home from the edge of the area to complete his double – Ronaldo took his tally for the tournament to eight, three ahead of his nearest Golden Boot rival, clinched a fifth World Cup for his county, and was named the competition's best player. A few ghosts were exercised that night, too.

Shortly after the World Cup, Ronaldo was restored as the most coveted footballer on the planet, joining European Champions Real Madrid for €46million, and later claiming a record third FIFA World Player of the Year award and a second Ballon d'Or.

While Brazil disappointed at the 2006 World Cup in Germany, Ronaldo's three goals took his all-time tally on the grandest stage to 15, a record which stood until Miroslav Klose notched his 16th for Germany in 2014.

His career traced the arc of any typical Hollywood movie: rise, fall, then rise again. Fewer ever rose as high or shined as brightly as Ronaldo in 2002.