Soundtracked by Luciano Pavarotti's Nessun Dorma, beamed worldwide in glorious, vivid technicolour and housed in rocking stadia ordinarily occupied by the most glamorous and dominant club teams of the era, the 1990 World Cup in Italy conjures warm memories for many.

The backdrop to the childhood of a generation and a cultural curiosity to those it came a little too soon to catch, Italia '90 seemed to capture a moment in football history when everything was changing, the nebulous stage of modern football as we know it.

But, in truth, hindsight and posterity have been kind to the tournament, which offered little in the way of quality. Grey, defensive football saw an average of just 2.21 goals scored per game – still a record low at a World Cup – with tight encounters separated by shootouts a common theme.

Colour, however, was provided by a handful of memorable individual stars who lit up the tournament: the snake-hipped celebrations of 38-year-old Cameroon forward Roger Milla, impassioned Italian striker and eventual top scorer Salvatore “Toto” Schillaci, and none more so that England's Paul Gascoigne.

The young Tottenham Hotspur playmaker entered the tournament as England's wildcard, and left as their hero. Before the World Cup, manager Bobby Robson's already-agreed exit for PSV, coupled with still-raw wounds from a poor showing at Euro '88, meant there was little optimism surrounding the Three Lions.

Yet, as cynicism and pessimism reached fever pitch, the smiling, jovial, baby-faced cheeky chappy from Gateshead brought smiles to faces with his irrepressible joviality, and drew gasps of amazement with what he could do with a football.

His deftness of touch, his vision, his twinkle-toed dribbling style and penchant for flick, tricks and Cruyff turns marked ‘Gazza' out as the most un-English of players, and as inescapably the most gifted England star of his – perhaps any – generation.

“He was bright in those days, witty, and his practical jokes were unsurpassed,” legendary England striker Gary Lineker remembers of the midfielder. “He'd drive you crazy occasionally, especially playing with him – he never passed unless he was either exhausted or you had no alternative but to give it him straight back.”

Though his freshness of face and childlike demeanour made him seem like a boy among men in the England squad, at 23, Gascoigne was no pup. He had already starred for boyhood club Newcastle United, having made his senior debut at 17, and set a new British transfer record with his £2.2million move to Spurs in 1988, shunning the advances of Manchester United and Alex Ferguson.

Gascoigne was not a player without top-level experience in the summer of 1990, but he'd never quite had such a grand stage upon which to entertain the world. This was his launching pad; he was about to go stratospheric.

The 1990 World Cup is remembered by many England fans as the great ‘what could have been' tournament. Eliminated by Germany on penalties in the semi-final, Robson's side were just a few spot-kicks away from a final against an Argentina side who struggled to inspire, despite the presence of Diego Maradona.

However, it is often overlooked how England themselves were hardly in perfect fettle throughout the competition. Drawing their opening game, a drab encounter with the Republic of Ireland, they then drew with Holland before eking out qualification for the knockout stages with a narrow 1-0 victory over unfancied Egypt.

England edged past Belgium late in extra time in the last 16, overcame a scare against a vibrant Cameroon side, again in extra time, by virtue of two penalties, before then famously taking eventual champions Germany to the wire. 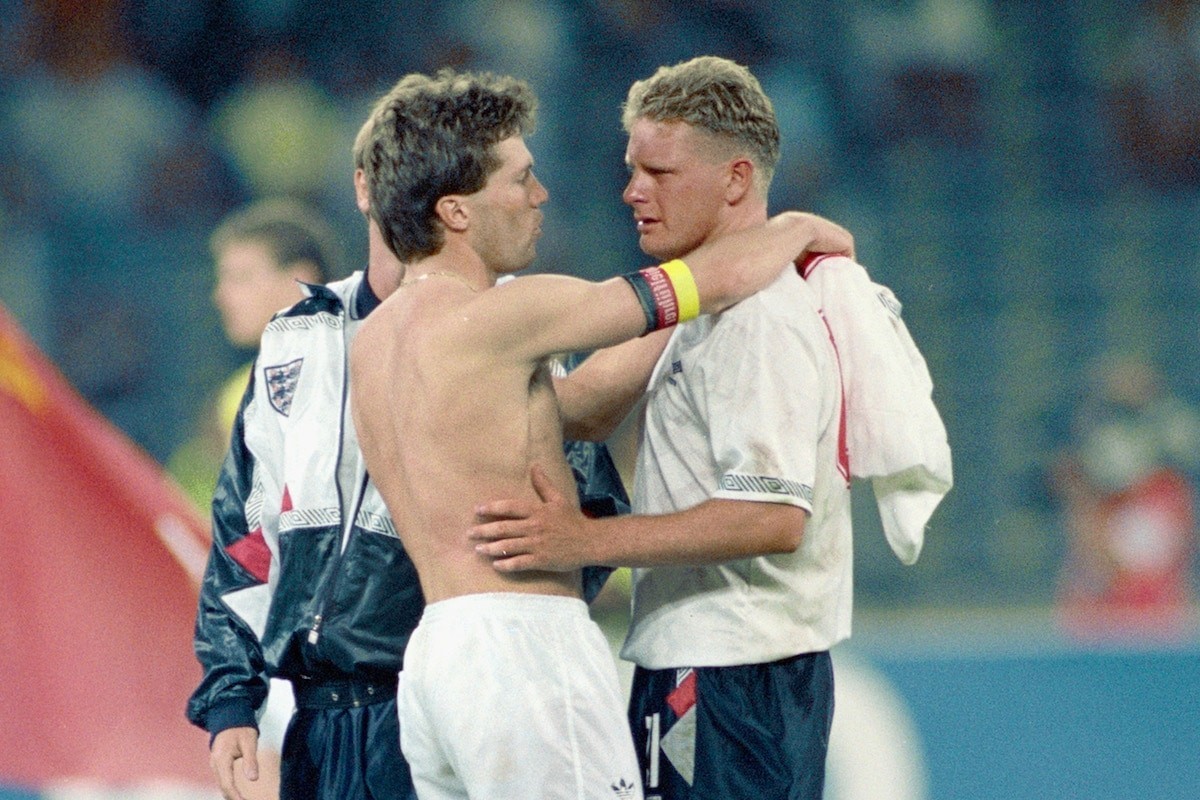 At each juncture, England progressed by the finest of margins. The difference each time, almost without exception, was Gascoigne's brilliance.

Continually providing a creative spark in the absence of captain Bryan Robson – who was ruled out of the tournament after England's second game, dropping one of the hotel's cast-iron beds on his toe while competing with a certain midfield prankster in a “test of strength”, as defender Paul Parker remembers – Gascoigne was England's talisman.

Needing a win over Egypt to ensure progression, it was the Spurs playmaker's superbly flighted free-kick which assisted Mark Wright to head home the only goal of the game. Against Belgium, Gascoigne's set-piece mastery again came up trumps, winning a free-kick after a lung-bursting drive into opposition territory in the final 120 seconds of extra time, and then floating it perfectly into the penalty area to set up David Platt's iconic swivelling volley.

Next up were Cameroon, who took a 65th-minute lead, inspired by Milla's second-half introduction. This time Gascoigne had temporarily turned villain, clumsily conceding a penalty which Emmanuel Kundé dispatched. He soon made amends, though, as his sumptuous through-ball led to Lineker winning a second spot-kick for the Three Lions, which the striker scored to send England through to the last four.

Juventus‘ Stadio delle Alpi set the scene for Gascoigne's most iconic, memorable moment. As England went toe-to-toe with Germany, trailing to a deflected Andreas Brehme free-kick before Lineker equalised in the 80th minute, the 23-year-old midfielder tore around the pitch in typically exuberant style, dribbling, slaloming and seeking to poke holes in Die Mannschaft‘s stubborn backline.

That exuberance overspilled in extra time, however, with Gascoigne booked for a late challenge on Thomas Berthold. Having already picked up a yellow card earlier in the tournament, England's No.19 had just ruled himself out of a potential final. The young man was distraught; the tears could not be resisted.

As the emotional realisation overwhelmed Gascoigne, and Lineker signalled to Robson to keep an eye on the enigmatic creator, a nation felt its hero's pain. Gascoigne's appeal, aside from his precocious talent – above it, even – lay in his reliability: he was the boy next door, the lad we all went to school with; his vulnerability was powerfully endearing, and it had just been laid bare in front of the watching world.

“Before Paul Gascoigne, did anyone ever become a national hero and a dead-cert millionaire by crying? Fabulous,” author Salman Rushdie remarked in The Independent. “Weep and the world weeps with you.”

Ultimately, there was to be no final for England, victims of Germany's ruthlessness from 12 yards, and Italy took the spoils in the third-place play-off. But Robson's lions returned to Blighty as kings, having captured the imagination of supporters in a way not seen since the 1966 triumph on home soil. This band of underdogs had exceeded all pre-tournament expectations, flown close to the sun and were felled by their flaws, and were all the more adored because of it.

And, as the the preceding years would show, none were more flawed than Gascoigne. The japes and the jesting were a veneer, masking the tears of a clown, gripped by alcoholism and mental health problems. His subsequent struggles have inevitably coloured memories of his hijinks and quirks differently, knowing now what wasn't known then, and seeing clearly the signs that were unnoticed or ignored for too long.

That was of little concern at the time; Gascoigne's World Cup seemed to mark an ascension, a beginning, rather than the zenith it turned out to be. When 300,000 fans lined the streets of Luton to welcome their returning heroes, there was no doubt over who was the star attraction: Gazzamania had well and truly swept the nation.

Robson's words to Gascoigne on the pitch after the defeat to Germany harrow with hindsight: “Don't worry, you've been one of the best players of the tournament. You've been magnificent. You've got your life ahead of you – this is your first.”

The 1994 World Cup in the USA should have belonged to Gascoigne, by then 27 and a star for Lazio in Serie A, but a calamitous qualification campaign rendered England spectators. In 1998, he was inconsolable after failing to make the cut for Glenn Hoddle's 23-man squad.

What was supposed to be the opening chapter of Gascoigne's World Cup story instead proved to be the entire book, but it's an epic nonetheless.