“There are only two Christs. One plays for Barcelona, the other is in heaven.”

The finest footballer Bulgaria has ever produced, an all-time great of the Camp Nou and European football, and one of the game’s most iconic, intense and irascible figures.

Hristo Stoichkov, whose forename is ‘Christ’ in Bulgarian, was a player permanently on the edge, constantly searching for the equilibrium between his angelic qualities with the ball at his feet and the devil raging deep inside. Gloriously gifted but fiercely competitive, occasionally to his detriment.

Nicknamed ‘The Dagger’ it was the perfect encapsulation of his ruthless playing style and volatile personality, with his deepest cut delivered on the grandest stage in leading Bulgaria to fourth at USA ’94, finishing the tournament as its joint top-scorer with six goals.

Turning 28 in February of that year, his best football aligned with the recognised peak years of a professional.

He had developed from troubled teenager at CSKA Sofia to becoming a genuine world class striker for Johan Cruyff’s Barcelona Dream Team, forming a frankly ridiculous attacking partnership with Romario.

Internationally, he also became a totemic figure for Bulgaria but had been part of squads who had failed to reach three successive tournaments between 1988 and 1992. The clock was ticking.

It was very nearly a fourth straight failure as the clock ticked down on a rainy evening in Paris on November 17, 1993. With David Ginola holding the ball in the corner with ten seconds remaining, France needed to maintain the 1-1 scoreline to guarantee their place in the United States.

Stoichkov was unrelenting in his analysis: “The French were so scared. We knew that’s how they’d be and our tactics were based on that.

“They played for a draw and never went looking for a win. They didn’t deserve to qualify and we hit them where it hurt most.”

Having reached his first major international tournament, he wanted to bury and twist the dagger into his victims.

Jorge Valdano once said: “Stoichkov is a predator – a beast who is only satiated by the flesh of his victims.” Evidently, he had a point.

But they arrived at the World Cup in the U.S.A with confidence, Stoichkov the figurehead of a talented squad which also featured Kostadinov of Porto, midfield artists Yordan Letchkov and Krasimir Balakov, the unmistakable facial hair and long-range free-kicks of full-back Trifon Ivanov… plus goalkeeper Borislav Mikhailov and his toupee.

There was also a considerable element of responsibility among the 23 men under Dimitar Penev’s management. Post-communist Bulgaria was one of widespread inflation, economic failure, poverty and political corruption; a nation searching for an identity.

Their tournament opener initially belied any feelings of pressure resulting from expectation.

Playing in the heat and humidity of a tea-time game in Dallas against Nigeria, Bulgaria made a positive start with Stoichkov setting up Kostadinov only for the striker to be denied by Peter Rufai.

That positive start however soon dissipated as they received a sobering introduction into the competition as Nigeria struck through Rashidi Yekini – leading to that iconic net-clutching celebration.

Undeterred, Bulgaria tried to stay on the front foot and when Stoichkov was fouled 35 yards out, eight minutes before half-time, he had an opportunity to showcase his dead-ball prowess.

With a two-step run-up he fired an immaculate curling left-footed strike into Rufai’s top-left corner. Stoichkov celebrated. His moment had arrived. Except referee Rodrigo Badilla’s arm was raised, the free-kick had been bizarrely ruled as indirect and the goal was disallowed.

The decision seemed to have a profound effect on the Bulgarians as they were distinctly second-best, conceding twice more to Daniel Amokachi and Emmanuel Amunike.

A 3-0 defeat about as worse a start to a tournament as can get.

The reaction spoke volumes for the character of the squad.

They relocated to Chicago to play Greece, who had been hammered 4-0 by Argentina four days earlier via a Gabriel Batistuta hat-trick and a wild-eyed Diego Maradona. Defeat at Soldier Field was not an option for either side.

Stoichkov led the way opening the scoring after just five minutes with a penalty which saw the Barcelona striker begin his run-up from well outside the 18-yard box, implying he was going for power, only to place the ball softly into the right corner.

Given the opportunity from 12 yards on 50 minutes, he went into the opposite corner to put his side 2-0 up. Letchkov then scored the goal of the game, exchanging passes with Zlatko Yankov before sliding his finish past Elias Atmatsidis.

Daniel Borimirov sealed a mightily impressive 4-0 triumph – their first ever at a World Cup – with considerable thanks to Stoichkov as the striker’s free-kick in the 90th minute cannoned back off the post for the substitute to tap in.

Rejuvenated and reinvigorated, Bulgaria then faced Argentina in Dallas to decide their fate. With Maradona sent home in disgrace following his positive drugs test, La Albiceleste were in chaos; talented but rudderless.

Stoichkov showed no mercy with a textbook goal on 61 minutes. Starting his run well inside his own half, he accelerated between Argentina’s sluggish centre-backs, to receive Kostadinov’s through-ball before toe-poking a finish under Luis Islas.

Nasko Sirakov’s fine near-post header in injury time then finished Argentina off and Bulgaria would face Mexico in the last 16 in New Jersey.

Leaving nothing to chance, Stoichkov revealed 21 years later that he had a spy inside the Mexican camp who leaked details of how they would line-up, tactical plans and specific preparations they had worked on such as free-kick routines.

He didn’t need much insider knowledge in opening the scoring just six minutes into the match with a vintage strike. The Barcelona forward burst through down the left channel before arrowing a finish into Jorge Campos’ near-post top corner.

Mexico soon equalised through an Alberto García Aspe penalty but a lively encounter saw the match enter extra-time with 10 v 10 as Luis García and Kremenliev were both dismissed within seven second-half minutes for two bookings.

It was left for penalties to decide but Stoichkov, nominated as fifth taker, didn’t need to step up with the Mexicans missing their first three kicks.

Bulgaria had truly arrived but with holders Germany up next this was expected to be the extent of their adventure.

Instead, they produced their best performance of the tournament and one of the all-time great World Cup displays by a team. 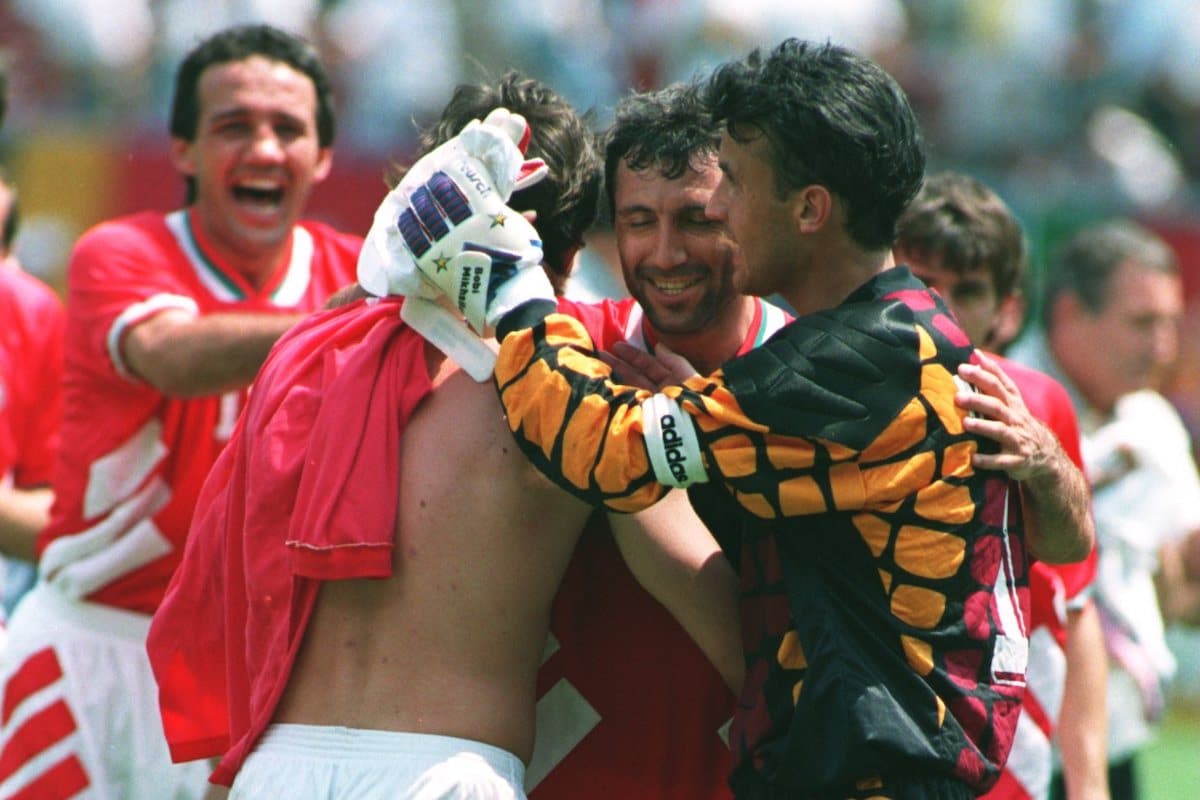 After a tight first-half, Lothar Matthaus’ penalty had given Germany a 47th minute lead and a foundation to finish off their opponents but in a glorious three-minute spell, the competition was turned on its head.

First, Stoichkov produced one of his party-pieces, gliding a swirling free-kick into Bodo Illgner’s near post. There was even time for a smile in the celebration, in recognition of his daughter Mihaela who turned six that same day and had asked him to score.

That grin widened as Yankov’s cross saw Letchkov sneak in at the far post ahead of the undersized Thomas Hassler and plant his balding head on the ball with a brilliant diving header. A moment that has now come to pass as one of the greatest in World Cup history.

Such was the drama inside Giants Stadium that Stoichkov’s mother Penka suffered heart problems while celebrating in the stands and had to be taken to hospital while his father Stoichko, watching at the family home in Slovia, admitted he had to take tranquilizers during the match.

The challenge only intensified in the semi-finals against Italy who had arguably been the tournament’s outstanding side. The Azzurri certainly laid down a marker with two fine Roberto Baggio goals, the first after he danced along the edge of the 18-yard-box, leaving Bulgaria broken.

Stoichkov replied with a spot-kick just before half-time, his sixth and final goal of the competition, but bar a second-half penalty appeal for handball that they didn’t get, it proved one hurdle too far.

With their euphoria dampened the tournament’s other surprise package Sweden then thrashed them 4-0 in the third/fourth play-off but it didn’t matter.

From such an abject first performance they arguably had made a bigger impact than eventual winners Brazil, certainly history remember this Bulgaria side with greater fondness.

Stoichkov was awarded the Bronze Ball as the tournament’s third-best player and shared the Golden Boot with Russia’s Oleg Salenko but a bigger individual prize was to follow at the end of 1994 as he claimed the Ballon d’Or.

“I think the world will realise we have some very classy footballers in Bulgaria,” said Stoichkov during USA ’94. None classier than him.