There was nothing flashy about Gerd Müller, nothing especially graceful, elegant or obviously technically advanced to how he went about his job.

During his late-1960s to mid-'70s heyday, for example, when he was one of the stars of an immensely successful Bayern Munich side, he didn't glide across the turf with the panache of team-mate Franz Beckenbauer, nor did he drop jaws with the inventiveness and skill of peers such as Pelé or Johan Cruyff.

What he did do, however, and perhaps better than any player in the history of the game, was put the ball in the net, over and over gain.

With the kind of thirst for goals now recognised and hailed in the likes of Cristiano Ronaldo and Harry Kane, Müller was the ultimate scorer, the most driven, hungry and tenacious goal-getter of his time.

Appearances mattered not to the man nicknamed “Der Bomber”, no time given to aesthetics; Müller's only concern was with identifying and exploiting the shortest, most available route to goal.

When it came to technique, there were many more gifted than the German striker. But no-one could match his instincts within the penalty area, seemingly tipped off telepathically to where within box the ball would land, possessing a unique knack for calibrating ricochets and anticipating rebounds.

For a decade and a half, Müller was the most feared marksman in Europe, netting an incredible 564 goals in 605 games for Bayern. Four times he was the continent's top domestic scorer and pivotal to four Bundesliga titles, four DFB Pokals and three European Cup triumphs in a row.

Such scoring feats were not seen again at the highest level of European football until Lionel Messi and Ronaldo emerged at Barcelona and Real Madrid respectively, whose rivalry pushed each other on to Müller-esque returns.

Although Müller would rarely inspire awe through producing unthinkable, exquisite moments of brilliance unrepeatable by most mere mortals, as many greats of the era did, the sheer relentlessness of his goal-scoring was breathtaking.

While many of his goals may not have been obviously brilliant, anyone with a deeper understanding of the minutiae of the striker's role understood just how rare his combination of anticipation, speed over short distances and upper-body strength was, and how his ability to spin and find the target from any angle or out-jump centre-halves who towered above his 5ft 9ins was nothing short of incredible.

“Müller was short, squat, awkward-looking and not notably fast; he never fitted the conventional idea of a great footballer,” Winner writes, “but he had lethal acceleration over short distances, a remarkable aerial game, and uncanny goalscoring instincts. His short legs gave him a strangely low center of gravity, so he could turn quickly and with perfect balance in spaces and at speeds that would cause other players to fall over. He also had a knack of scoring in unlikely situations.”

And Müller saved his best for the grandest stage, scoring 14 goals across two World Cups for West Germany, setting a high mark for strikes in the competition that lasted for more than 30 years from his last World Cup goal in the 1974 final until Ronaldo struck his 15th for Brazil in 2006, the tournament held, fittingly, in Germany.

Müller made his international debut in 1966, shortly after West Germany lost to England in the final of that year's World Cup. Although he failed to find the net in his bow against Turkey, Müller set the tone for the rest of his international career by scoring four against Albania in his second cap. The Bayern hitman netted nine times in six qualification matches for the next tournament, making him a shoo-in for selection for Mexico '70.

The Germans exacted revenge over England under the baking Central American sun, eliminating the holders via a 3-2 quarter-final victory, with Müller netting the winner in extra time, already his eighth goal of the competition.

Die Mannschaft came up short of a second World Cup triumph, however, losing to eventual beaten finalists Italy in 4-3 in a classic, extra-time semi-final. By way of a consolation, Müller's brace against the Azzurri assured he was awarded the Golden Boot as the tournament's highest scorer with ten goals. 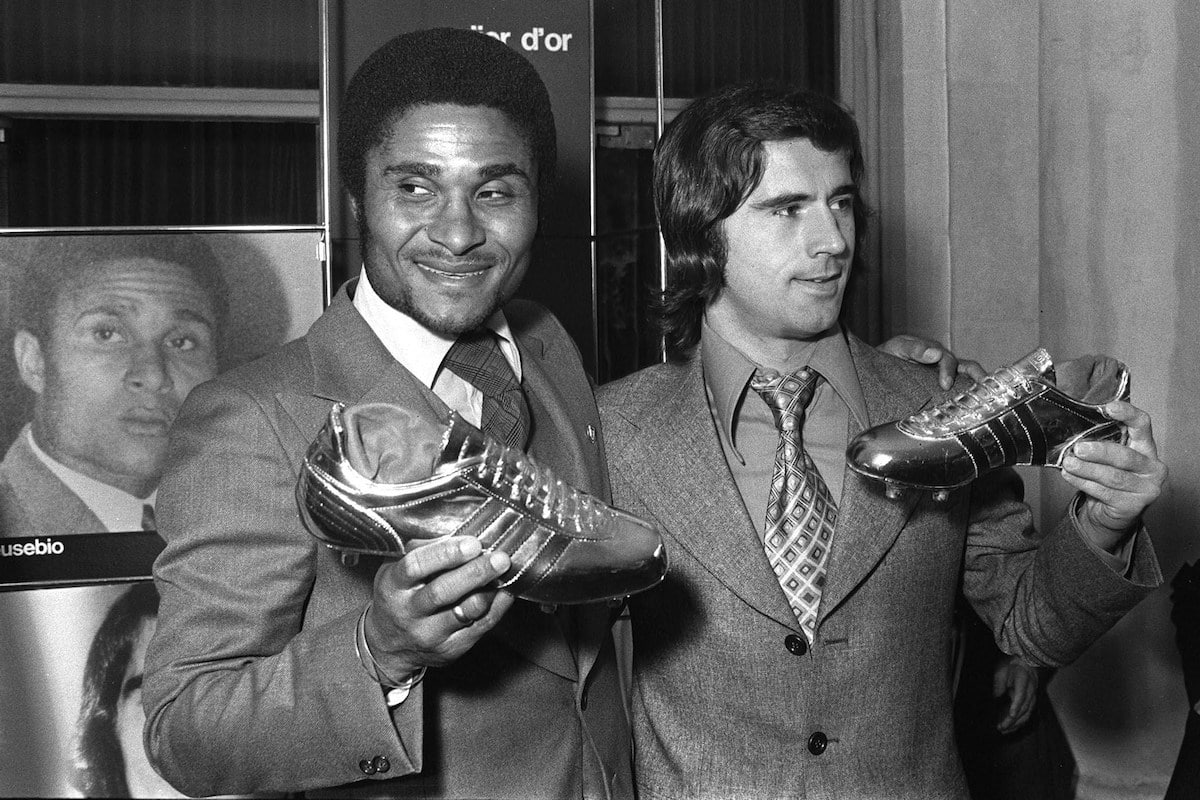 Müller was also the recipient of the Ballon d'Or that year, in recognition of his scoring feats with Germany at the World Cup as well as another prolific 12 months with Bayern.

Now a bona fide star of the world game, Müller led Germany to glory in the European Championship two years later, scoring four in just two games at the tournament, part of a frankly ridiculous haul of 85 goals in 1972, a calendar-year record which stood until Messi scored 91 times in 2012.

Then, at the age of 28, Müller brought the curtain down on his international career at the 1974 World Cup on home soil. Unable to match his contribution from Mexico '70, the West Germany No.9 only scored four times in '74, but most of those strikes carried huge importance.

His second goal of the tournament secured victory over Yugoslavia in the opening game of the second group phase; his third was the only goal in Germany's last fixture of the second group round, against Poland, effectively a play-off for top spot and a place in the final.

Then, in the final against the historic Dutch ‘Total Football' side, which had won neutral hearts through the revolutionary tactics of Rinus Michels and the technical brilliance of Cruyff et al, Müller bagged the decider in a 2-1 win, his 68th and last goal on the international stage.

That strike made Müller Germany's all-time leading scorer, setting a mark that would eventually take Miroslav Klose more than twice the 66 appearances it had been achieved in to beat.

The ultimate poacher, nine of Müller's World Cup goals were struck, scuffed or headed home from inside the six-yard box, with only one coming further from goal than the penalty spot.

But to understand and revel in Müller's magnificence is to appreciate beauty in simplicity. Cruyff, one of football's great philosophers, once posited that “Playing football is very simple, but playing simple football is the hardest thing there is”. In that regard, Müller had the game mastered.