In the 52 years since England lifted the Jules Rimet trophy on the immaculate Wembley turf, crowned world champions for the first and still only time, there has been no shortage of world-class talent to represent the Three Lions.

Indeed, little more than a decade ago came the so-called ‘Golden Generation', comprised of stars such as David Beckham Wayne Rooney, Steven Gerrard and Frank Lampard, all of whom at the time were key players for some of Europe's biggest and most successful clubs.

But what England have lacked desperately, and which is chief among the reasons why they are without even a semi-final appearance at a major tournament in more than two decades, is a collection of gifted individuals able to translate stellar club form on to the international scene.

Of course, the tactical plan of the manager is a crucial part of the concoction that creates such a player, and in that regard England's stars have too often been underserved. But it also requires the right temperament, self-assuredness and a level of dependability of the player. All things Gary Lineker, England's star striker of two World Cups, had in spades.

Something of a late arrival on the international scene, Lineker was 24 by the time of his England debut, with the then-Leicester City striker making his senior bow against Scotland in 1984. After six goals in nine internationals the following year, it was evident he would be a key player for Bobby Robson's Three Lions at the 1986 World Cup in Mexico.

Initially paired up front with Mark Hateley, the 6ft 3ins powerhouse then of AC Milan, Lineker was ineffective as England were goalless and pointless in their opening two games, losing 1-0 to Portugal and drawing 0-0 with Morocco.

Stylistically, Lineker, as a penalty-box poacher, required space to operate in if he was to be at his best, afforded the freedom of the 18-yard box to scheme and plot his way through the opposition's defence. Alongside the imposing, totemic Hateley, whose remit was to monopolise the central attacking zone and provide a target for long balls, Lineker was left to feed off scraps, beholden to his partner's ability to provide knock-downs and flick-ons.

Recognising the issue, Robson made the bold decision to drop the Serie A star in favour of Peter Beardsley for England's final, crucial group game against Poland, where only a victory would give them a chance of progress.

Beardsley, more in the mould of a No.10, at home in deeper areas and a much more prolific and inventive creator than Hateley, facilitated Lineker's thirst for freedom in the attacking third; the Leicester striker duly employed his trademark movement to plunder a hat-trick in a 3-0 win. 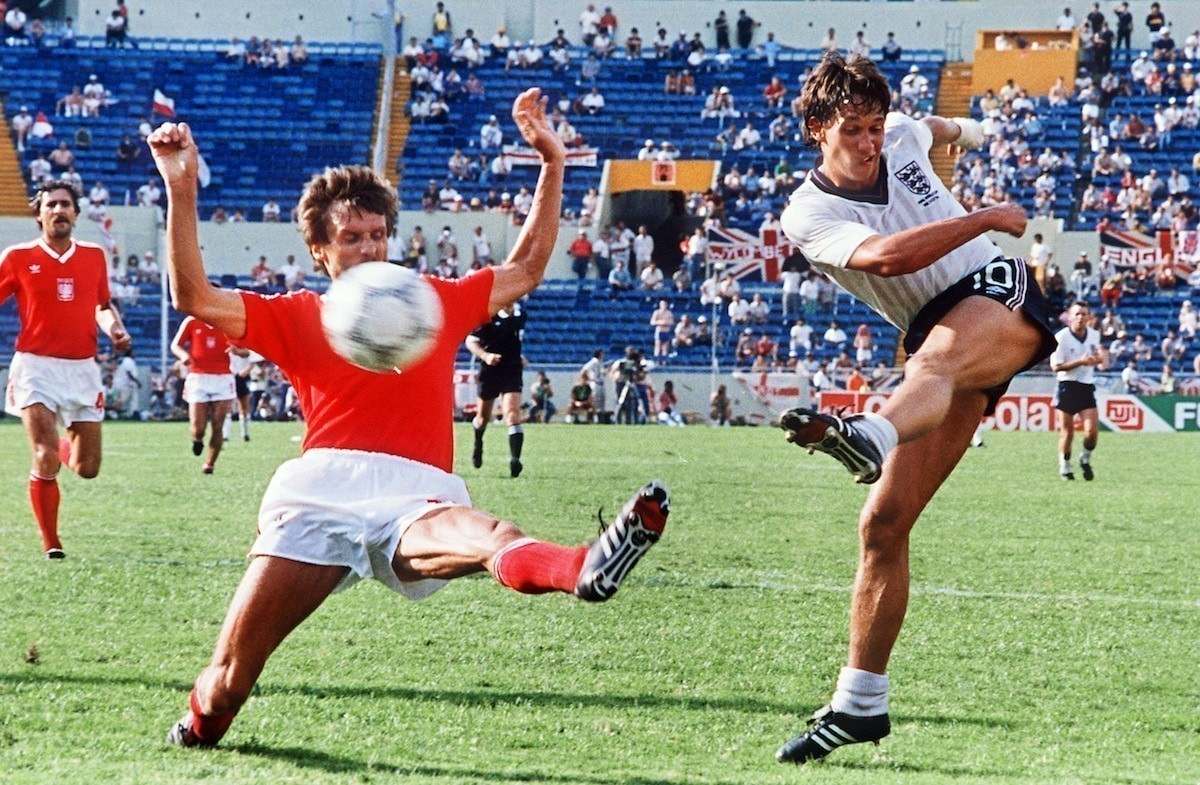 Lineker and Beardsley further cemented their status as Engand's most suitable strike duo in the round of 16, netting a brace and a single goal respectively in another 3-0 victory, this time over Paraguay.

Under the baking Mexican sun, in front of 114,000 spectators at the Estadio Azteca, Diego Maradona bent the rules to put Argentina ahead in England's quarter-final tie, then bent the very game itself to his will, twisting away from half the English outfield to score one of football's greatest ever goals.

England were sent packing, but not before Lineker netted a consolation, his sixth strike of the tournament, earning him the Golden Boot as the '86 World Cup's top scorer.

Remarkably, each of Lineker's six goals were struck from inside the six-yard box. Indeed, of the ten he plundered on international football's grandest stage, across two tournaments combined, aside from two penalties, all but one was scored from within six yards of the target.

As such, when watching Lineker, it wasn't always apparent that this was a world-class operator at the peak of his powers, and one of the very best players on the planet, at least not to the layman observer.

However, there was an incredible amount of nuance to Lineker's game: the subtlety of his movement; his ability to quickly identify dangerous pockets of space and dart to them before the mere possibility of a chance was extinguished by the attention of his marker; his knack for anticipating patterns of play and positioning himself perfectly to profit – he was perennially in the right place at the right time, but there wasn't a hint of fortune to it.

That quarter-final exit in Mexico, of course, was not the end of Lineker's World Cup story with the striker playing an equally pivotal role in England's run to the semi-finals in 1990, perhaps the most iconic Three Lions team since the World Cup winners of '66. 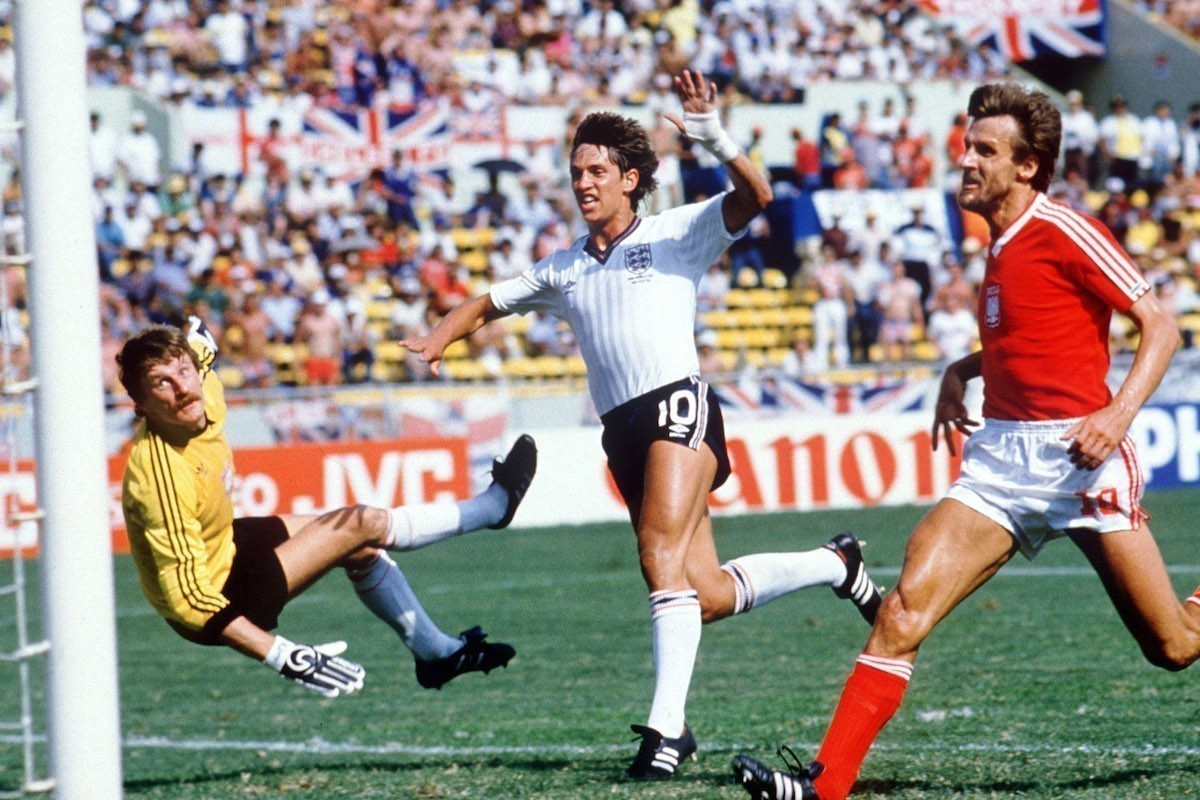 In the interim period between World Cups, Barcelona paid £2.8million to snap up Lineker, whose star had risen rapidly following his exploits in Mexico. He would enjoy three seasons at the Camp Nou, breaking the 20-goal barrier in his first two campaigns and earning cult status thanks to a hat-trick against arch rivals Real Madrid.

However, when Johan Cruyff replaced Terry Venables as Barça boss in 1988, the Dutchman pushed Lineker out to the wing, a tactical switch that seemed ill-advised from the outset given the Englishman's unique skillset. In 1989, Lineker returned to England, joining back up with Venables at Tottenham Hotspur, where he finished as the First Division's top scorer for a third time before heading off to the World Cup in Italy.

As England progressed through Italia '90 – at first slowly, drawing with the Republic of Ireland and Holland, then gathering pace into the knockout rounds – ‘Gazzamania' swept the nation, as a baby-faced 23-year-old playmaker from Gateshead dazzled. Lineker, the calm, understated presence at the point of the Three Lions' attack, was the antidote to the hysteria, reliably punctuating Paul Gascoigne's enigmatic brilliance with typically lethal finishing.

When England's progress was threatened by Cameroon in the quarter-finals, it was Lineker who twice won and twice calmly converted spot kicks to send Robson's side through after extra-time. Then, in the semi-final, when a yellow card ruled Gascoigne out of a potential final, Lineker took responsibility for the young midfielder, who had been overcome with emotion, placing an arm around his shoulder and instructing the coaching staff to pay attention to the combustible star's mental state.

Of course, he scored, too. With England trailing, Lineker was coolness personified inside the box, controlling with his thigh and slotting beyond Bodo Illgner with just ten minutes to play. And although England lost on penalties, Lineker, reliable as ever, didn't err from 12 yards.

Unfittingly, Lineker's wonderful international career came to an inauspicious end in 1992. Marginalised somewhat by Graham Taylor, the striker's final England appearance came against Sweden at Euro '92, when he was substituted with the Three Lions chasing the game, denied the opportunity to match Sir Bobby Charlton's high mark of 49 international goals.

Rooney has since gone on to surpass Charlton's record, in turn outscoring Lineker by five goals, but Lineker's 48 were scored from just 80 caps, 26 fewer than Charlton and 39 fewer than Rooney.

“Football is a simple game; 22 men chase a ball for 90 minutes and at the end, the Germans win,” Lineker would later say, remembering the semi-final heartbreak of 1990. There was a similar inevitability about his own game, though: when Lineker was through on goal, he scored; whenever England needed him, he was there.