Much like Brazil, Spain have been a failing superpower over the last four years. Following their hat-trick of titles (Euro 2008, World Cup 2010 and Euro 2012), many expected La Roja to continue their dominance at the 2014 World Cup in Brazil.

Instead, Vicente del Bosque's reigning champions fell spectacularly at the first hurdle, being thumped by the Netherlands and losing to Chile as they exited at the group stage.

There was to be further disappointment at the European Championships two years later, too, being dumped out in the last 16 by Italy.

Having been dethroned as world and European champions in such humbling circumstances, del Bosque, the coach who had masterminded the most successful period in the nation's footballing history, stepped down.

Eight years is a long time in international football management and, like with any dynasty, the job facing del Bosque's successor was a daunting one. Luckily, in Julen Lopetegui, the Spanish Football Federation had a capable man upon which to call in their hour of need.

Now, as Russia looms, Spain are being talked about as favourites once again and are well-equipped for a bid to emulate their triumph in South Africa.

Spain, rather ominously for the other 31 nations, have not lost under Lopetegui, having won 13 and drawn five of his 18 games in charge.

Of course, a fair portion of those games have come against minnows in qualifying (like Macedonia, Liechtenstein and Albania, for example), but La Roja still managed four points in two qualifying games against their Euro 2016 tormentors Italy and beat France, Belgium and Argentina in friendlies.

In the end, Spain's progress was as smooth as it could have been, ending the qualifying campaign with nine wins and a draw from ten games and an impressive record of 36 goals scored and just three conceded.

One of the most striking results of the Lopetegui era was a 6-1 friendly demolition of Argentina in Madrid. That night, inside the Wanda Metropolitano, Lionel Messi watched from the stands as his country were brought to their knees by a Spain team that was starting to closely resemble the side that conquered the world eight years ago.

Post-match reports had highlighted how Lopetegui had successfully reinstalled a sense of identity to Spain. Many of the old faces were still present – Sergio Ramos and Andrés Iniesta both started against Argentina – but Spain have been reinvigorated by some of the new blood. Isco, the Real Madrid playmaker, netted a hat-trick in the 6-1 win having scored five times during qualifying.

The nimble-footed 26-year-old is expected to line up in alongside Iniesta and David Silva in a formidable-looking advanced midfield trio in Lopetegui's favoured 4-2-3-1.

Spain's success in the last decade was built on tiki-taka, the philosophy that became synonymous with Pep Guardiola's Barcelona and the national teams coached by the late Luis Aragonés first and del Bosque after him.

Spain's short passing game was characterised by fast, accurate passes to draw defenders out of position and force opponents into making errors. Of course, it couldn't have been possible without the fluid rotation of Silva, Iniesta and Cesć Fabregas among others.

However, Spain's collapse in 2014 signalled the end of tiki-taka. In Euro 2016, they had changed; Álvaro Morata, not a striker accustomed to tiki-taka, offered them more directness up front. It may not have produced the desired outcome but Lopetegui has found success with much the same personnel.

It's a strong-looking side, one comprised of creativity, balance and organisation. But Lopetegui has also managed to keep much of the foundation – Ramos, Piqué, Busquets, Silva and Iniesta – intact while introducing an exciting new crop, led by Isco, Marco Asensio and Saúl Ñíguez.

Unsurprisingly, Spain averaged more passes per 90 minutes than any other nation in qualifying across all federations with 772. Not only do they retain possession remarkably well, they win it high up the pitch as well as anyone, averaging 7.4 recoveries in the attacking third per game.

They have been solid at the back, too, aided by the outstanding De Gea and the experience of defensive partners Piqué and Ramos, who have 247 caps between them. Spain ranked third in the least scoring attempts conceded with 6.1 per game, behind only Portugal and France.

Of course, the backline have been helped in no small part by Busquets, as accomplished a holding midfielder the modern game has seen. Spain are expected to be clinical in attack in Russia but will also be tough to break down – they look a more solid unit than the crumbling one which exited the last two tournaments prematurely.

Silva and Iniesta are still highly influential but there is a growing sense that this could be Isco's tournament. Left out of Del Bosque's squad in 2014, he has blossomed into a wonderfully inventive player in the four years since.

Lopetegui has always been a fan of the 26-year-old, though. The coach was in charge of Spain's under-21 side when they clinched the UEFA European Under-21 Championship in 2013, a tournament in which Isco starred and was named in the team of the tournament. 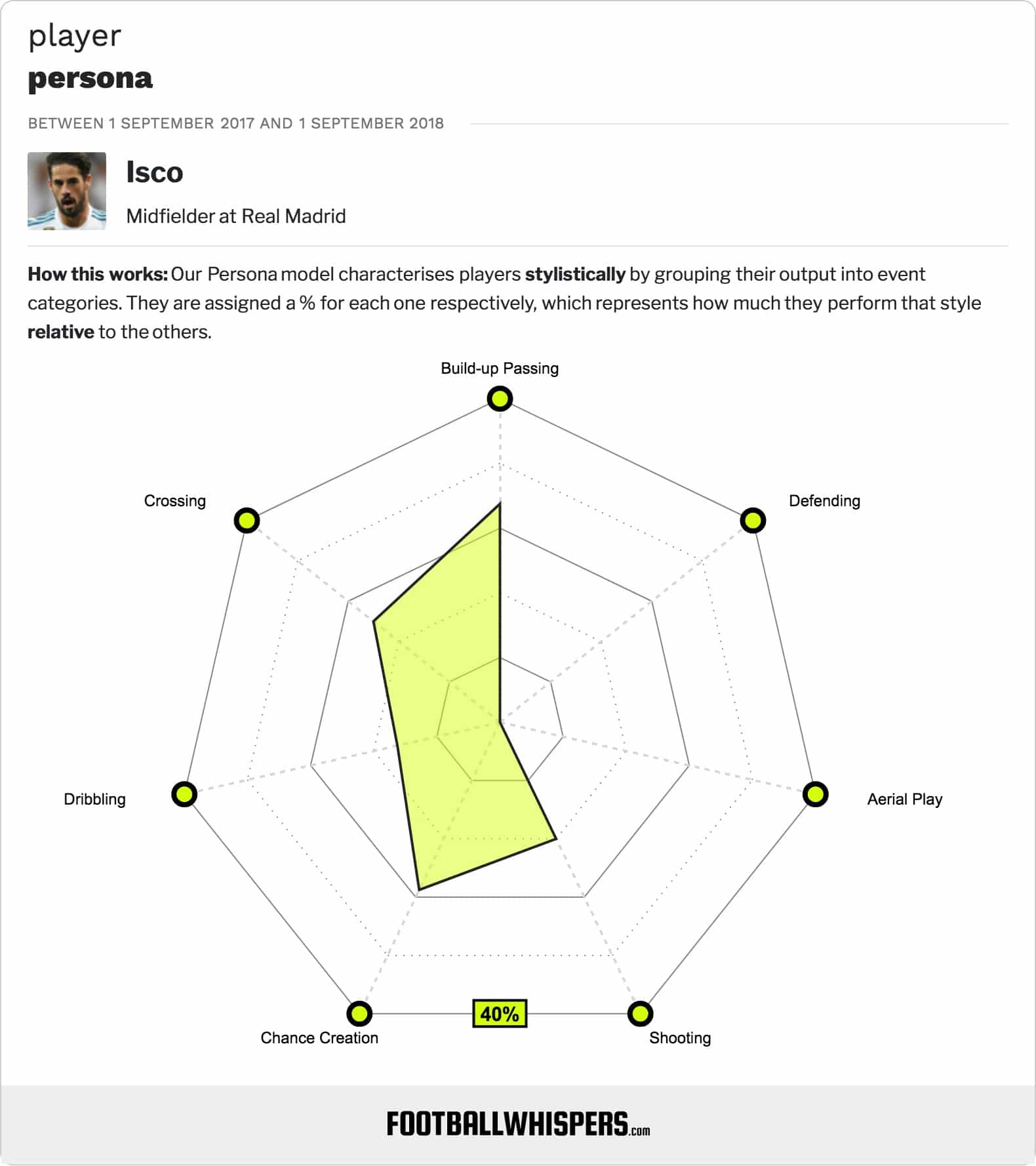 Having become increasingly influential at Real in recent seasons, Isco mirrored his upward trajectory on the international stage, scoring five goals during qualifying to cement his place in the side.

Of course, Isco's contributions extend beyond merely putting the ball in the net. He is responsible for often giving Spain their forward momentum, as evidenced by his 4.28 successful take-ons per 90 in qualifying. His open-play key passes of 0.9 per 90 may seem low, but that is more a result of being liberated from some of his creative responsibilities by the presence of Iniesta and Silva.

When Lopetegui was unveiled in July 2016, he promised evolution, not revolution. He has been true to his word. Spain have been revived under the former Porto boss but without any radical reinvention or dramatic transformation.

Lopetegui has kept much of what has worked, tweaking and reshaping where necessary.

While he hasn't been tested in the pressure-cooker atmosphere of a tournament yet, the 51-year-old has impressed with his eloquence and charm during a troubled spell off the pitch, which has seen the Catalan independence referendum and the Spanish FA president, Ángel María Villar Llona, arrested on corruption charges.

Most importantly, he has got Spain winning once again and has earned the trust of the Spanish public. Replicate the World Cup-winning side of 2010 and he will soon be a national hero.

Portugal will almost certainly threaten Spain's claim for top spot in Group B, but with Morocco and Iran as the other two nations, it would be considered a disaster if Lopetegui's side fell at the first hurdle.

Of course, after the disappointment of 2014, the main aim is to restore their pride and, having shown excellent form recently, Spain will be expecting a run to at least the semi-finals. However, considering the strength of Brazil, Germany and France, to name a few, regaining their crown will be a tough ask.