Despite a population of just 11 million, Tunisia have a rich World Cup history, not least as the first African nation to win a game at the competition, recording a 3-1 victory over Mexico back in 1978.

They've never managed to progress beyond the first group stage at any of their previous four World Cups, however. And, despite reaching an all-time high of 14th in the FIFA World rankings, matched up with England and Belgium in Group G, the odds are stacked against the Eagles of Carthage once again.

Tunisia can take heart from having held their own against Portugal recently, though.

Although the champions of Europe were without star man Cristiano Ronaldo, with the game taking place just two days after Real Madrid‘s Champions League final triumph over Liverpool, a credible 2-2 draw showed the African side are capable of frustrating European opposition – England and Belgium cannot afford to underestimate them.

Disappointed with their quarter-final exit at the 2017 Africa Cup of Nations, surprisingly beaten 2-0 by Burkina Faso, Tunisia sacked Polish coach Henryk Kasperczak, who was in his second spell in charge and replaced him with Nabil Maâloul. 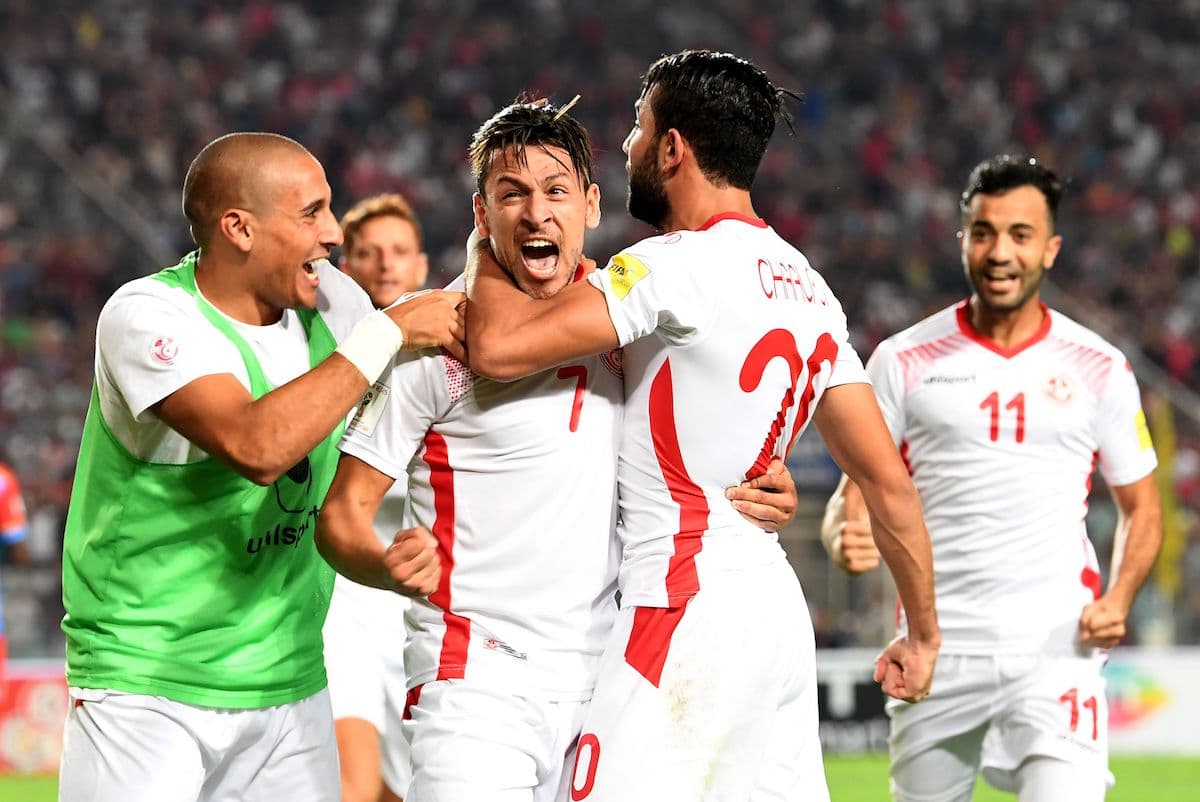 Having comfortably topped the group, Tunisia booked their place at the World Cup, their first since 2006, and steadily rose up the FIFA World Rankings, where they currently sit 14th, just one place below England.

In preparation for taking on Panama at the finals, Tunisia faced off with Central American opposition in the form of Costa Rica in a recent friendly, edging a 1-0 win, before then pitting their wits against Portugal.

Although the European champions took a 2-0 lead within 34 minutes in Braga, Tunisia fought back, earning a draw via strikes from Fakhreddine Ben Youssef and Anice Badri.

Throughout qualification, Tunisia tended to line up in a 4-3-3 formation, occasionally switching to 4-2-3-1 when a greater central presence was required.

Stylistically, under Maâloul, Tunisia have been rigid, organised and difficult to break down, hence their stellar defensive record. Packing the midfield with hard-working, hard-running ball winners, rather than creative playmakers, they have energy and discipline in spades.

In the games against England and Belgium, where they will be heavy underdogs, Tunisia have the ability to stick to a defensive task and frustrate their superior opponents.

However, when asked by World Soccer about his tactical plan for the tournament, Maâloul admitted he is keeping is options open.

“You ask me for my philosophy, but I haven't decided yet when it comes to the World Cup,” he said. “That can change, it depends. We have England, Belgium and Panama in the group. Our tactical conception may evolve.”

As evidence of their ability to put pressure on opponents and the steeliness of their play without the ball, Tunisia recovered possession more times than any other African nation during qualifying.

Tunisia also ranked highest for total passes, with 3746, for an average of 468.25 per game, showing they are equally effective with and without the ball. 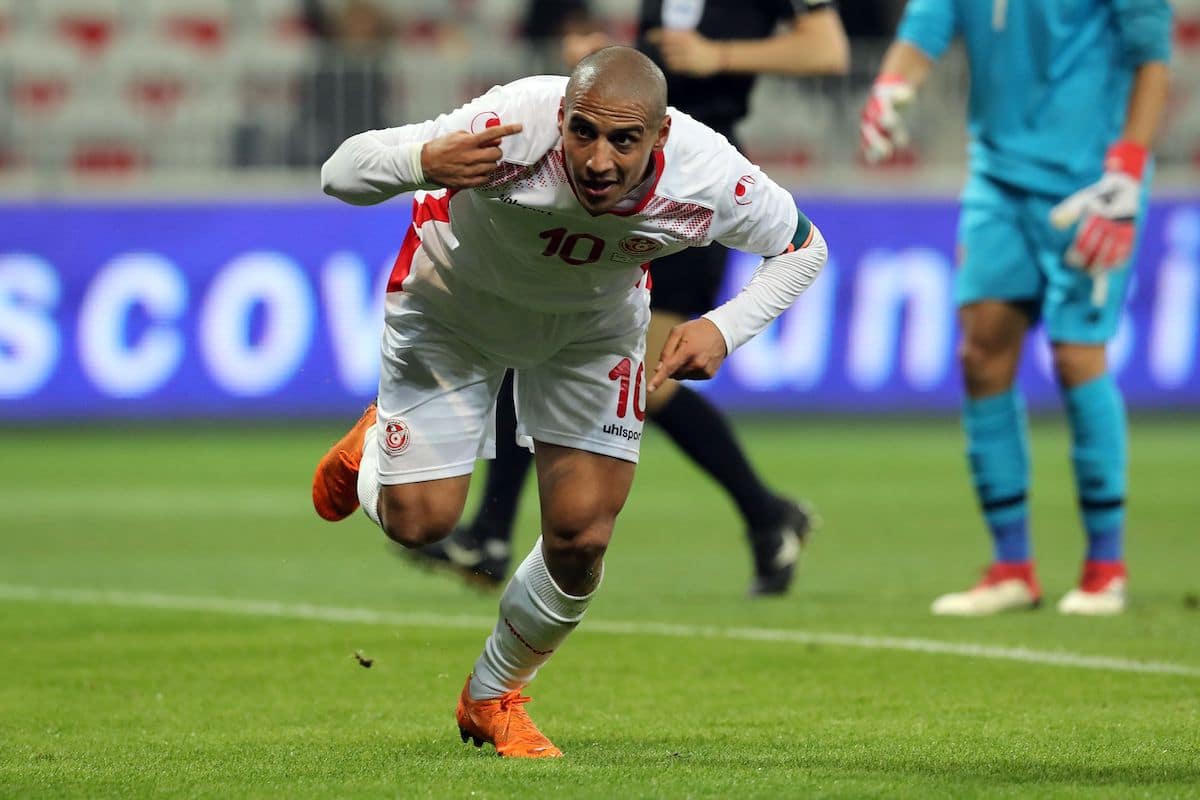 Tunisia will be without arguably their most influential player at the World Cup, with a cruciate knee ligament injury ruling out Youssef Msakni.

The 27-year-old attacker, who has been capped 47 times, sustained the injury on club duty for Qatari side Al-Duhail in April and isn't expected to return for six months after undergoing surgery.

The Eagles of Carthage can still count on one experienced attacker with proven international pedigree, however, in the form of Wahbi Khazri.

With 12 goals from 37 caps, Khazri is Tunisia's all-time highest scorer. The former Bordeaux attacker showed brief glimpses of his magic upon joining Sunderland in January 2016, but, with just three league goals in 38 games for the Stadium of Light club, his best form hasn't been seen in England.

Khazri spent 2017/18 on loan with Rennes, returning to France, the country of his birth, and rediscovering his scoring touch, netting 11 times in 22 all-competitions outings for the Ligue 1 side.

Able to play wide on the right, centrally as a No.10 or even at the point of attack as a false nine, Khazri offers versatility, flexibility and the kind of creative spark Tunisia will be reliant upon.

Maâloul enjoyed a ten-year international career with Tunisia during his playing days, picking up 74 caps as a midfielder between 1985 and 1995, as well as being his country's youngest player at the 1988 Olympics.

He is also no stranger to the Tunisian national team from a managerial perspective, having twice served as assistant boss – including during their last World Cup appearance in 2006 – and previously oversaw a brief spell in the top job in 2013, before returning to the post last year after three years in charge of Kuwait.

Dogged and determined, Maâloul believes strongly in the technical strengths of his side, assuring they will go “toe-to-toe” with England and Belgium.

Little is expected from Tunisia due to the strength of opposition they will face in Group G. Although they will be confident of overcoming Panama, they don't meet the World Cup newcomers until their final group game, by which point, having faced England and Belgium, they might already have been eliminated.

Tunisia will be no pushovers, though, and will provide a stern test for the two higher-ranked nations they face.

If they can perhaps earn a draw against either, they will have given themselves a chance of springing a huge upset and making it to the knockout rounds for the first time.