France head to Russia tipped by many to be one of the favourites to lift the 2018 World Cup. Didier Deschamps captained his nation to their sole success in the competition back in 1998 and now, as manager, has a squad capable of replicating the feat 20 years on.

The French have had something of a love-hate relationship with the competition ever since lifting the famous trophy. As reigning champions, they crashed out at the group stage in 2002, reached the final in 2006 before losing to Italy on penalties, failed to make it out of the group in 2010 and lost to eventual winners Germany in a quarter-final tie in 2014.

Will fans see Dr Jekyll or Mr Hyde this summer?

France topped their group during qualifying but it wasn't as comfortable as many assumed it would be for the Euro 2016 finalists. They eventually finished four points clear of second-placed Sweden but Deschamps' men didn't put on a show for on-lookers, despite a squad littered with stars, and struggled at times against inferior opposition.

The highlight of the group was Les Bleus‘ game against the Netherlands. France romped to a 4-0 victory with Liverpool transfer target Thomas Lemar, Kylian Mbappé and Antoine Griezmann all getting on the scoresheet. That, however, was an anomaly.

Belarus held them to a draw in the opening game and a narrow 2-1 win over the minnows in the return tie at the Stade de France was hardly convincing. Luxembourg also picked up a point against Les Bleus.

They may have finished at the summit of their group with 23 points but Sweden (26) and the Netherlands (21) scored more goals during qualifying.

It's a problem which has plagued the French national team for some time. At his disposal, Deschamps has some of the best players in world football today, but he struggles to get the best out of them in the system he opts to use.

The team have been just as inconsistent in friendlies, too. A defeat to Spain is nothing to be ashamed by and a draw against Germany is a solid result, but losing to Colombia isn't supposed to happen. Not on home soil and not when there's a 2-0 lead to defend.

Wins over Paraguay, England, Wales, Russia, the Republic of Ireland and Italy show they can turn it on when it suits them.

Deschamps is known to be stubborn. Instead of picking a system to suit the players he has, he picks a system and then shoehorns individuals into it. It's why so few French players are able to replicate their club form at international level.

The France manager often switches between a 4-4-2 shape and a 4-3-3 system depending on who they're up against. However, there are signs he's finally starting to become a little more flexible as he attempts to harness the quality at his disposal.

Instead of using a target man like he had done in the past, with Andre-Pierre Gignac and Olivier Giroud battling it out to lead the line, he's opted to use a more interchangeable forward line in recent friendlies.

The 3-1 win over Italy saw Griezmann, Mbappé and Ousmane Dembélé wreak havoc as the front three. It didn't just work, it was mesmerising at times.

With N'Golo Kanté sitting, Corentin Tolisso and Paul Pogba were allowed to roam from the middle third and influence proceedings higher up the pitch.

Italy spent large parts of the evening chasing shadows with the home side looking to get the ball forward as quickly as possible. With the pace and trickery of the front three, it's definitely going to be a tactic Deschamps utilises in the World Cup.

He's still got a plan B on the bench in the form of Giroud. The Chelsea man got the nod ahead of former Arsenal team-mate Alexandre Lacazette, while one-time Newcastle United flop Florian Thauvin was named in the squad ahead of Anthony Martial and Bayern Munich's Kingsley Coman.

In Kanté, Deschamps has arguably the best defensive midfielder playing the game today. Pressing the opposition high would force the destroyer into areas he's not necessarily comfortable in. It's why France's pressing game is geared towards getting the best out of the Chelsea man.

No team in Europe won possession more times in the middle third than France (39.1) did on a per 90 minute basis during qualifying. They also ranked highly in terms of regains, too, with only three teams bettering their 61.9 showing they're a pretty busy team all over the pitch and are likely to harass the opposition.

They also don't concede many shots. In fact, only Portugal (5.2) conceded fewer shots per 90 minutes, with opposition averaging six against France. 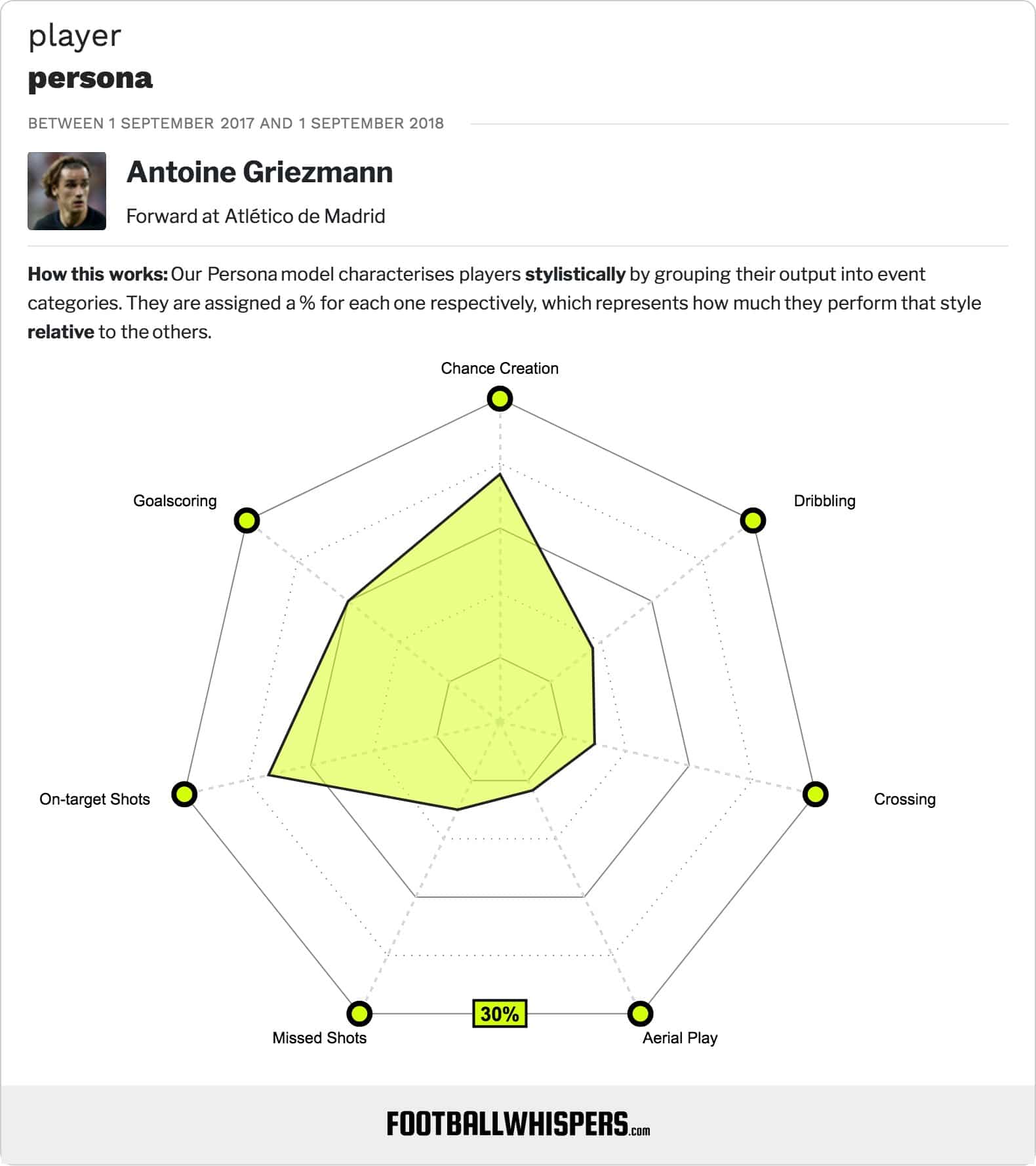 He shines brightly for Atlético Madrid and this could be the tournament in which Greizmann announces himself on the global stage. Named as a Barcelona transfer target, the 27-year-old scored 29 goals across the board last season and heads to Russia in fine form having helped fire the La Liga side to a Europa League triumph.

He was France's most influential player during qualifying, involving himself in eight goals. There are already signs of an understanding with Mbappé and Dembélé and if it clicks at the World Cup then the trio will be hard to stop.

All three could be potential match winners and game changers but it's Griezmann who is the most important, with his experience he's the one who will have to guide the youngsters during their first international competition.

Deschamps is a victim of his own stubbornness. France as a nation have a pool of talented youngsters to pick from who, if given the license to roam and express themselves, could run riot. But under the former Monaco manager, the players are shackled to a system which essentially blunts them.

He guided them all the way to the final of Euro 2016 but the French public never really took him, or the way the team played, to their hearts. The pressure is on him to get the best out of a French squad packed with talent unseen seen the days of Deschamps as a player.

This could be a make-or-break tournament for the 2009 Ligue 1 winner.

With a forward line worth in the region of £350million and a midfield three of Tolisso, Kanté and Pogba, France must have eyes on the latter stages of the competition. A group containing Australia, Denmark and Peru should be no issue for the one-time World Cup winners.

The squad may lack experience in the competition but they make up for it in nous and talent. A quater-final appearance must be the minimum for Deschamps and his players.