Dubbed as dark horses by many, the Belgium squad selected by Roberto Martínez should no doubt be bettering the 1986 achievement of a fourth-place finish at the World Cup.

With Jean-Marie Pfaff and Enzo Scifo starring for the Red Devils, they made it all the way to the semi-finals, dispatching of the Soviet Union and Spain along the way before eventual champions Argentina ended their World Cup dream. A third-place play-off defeat to a France team spearheaded by Michel Platini is still Belgium's best showing in the competition.

Currently ranked third in the world, Martínez's men have been drawn in a favourable group along with England, Tunisia and Panama. The free-scoring Belgians head to Russia having broken the record for most goals scored in qualifying and have the firepower to fire their way past most teams in the world today.

Belgium used qualifying to make a statement. They picked up 28 points from a possible 30 on offer, their only dropped points coming in a 1-1 draw with Greece. The 43 goals scored is a record (tied with Germany) and the forward line feasted against inferior opposition.

In two matches against Gibraltar they plundered 15 goals and added a further ten in the two against Estonia. The 8-1 win over the latter in Brussels was perhaps the highlight of their qualification run.

Martínez's men scored three or more in seven of the matches they played. Calling them rampant would be underplaying just how ruthless the likes of Dries Mertens were. Not to be outdone by the attacking unit, the defenders impressed, too, conceding just six goals in the ten matches.

However, it's not been as straightforward in the friendly matches. They conceded six goals In draws with Russia and Mexico while managing narrow wins over the Czech Republic and Japan.

A routine 4-0 win over Saudi Arabia wasn't good enough to gloss over previous performances and it resulted in Kevin de Bruyne, the poster boy of this Belgian side, questioning the former Everton manager's tactics. There are question marks over how the team will perform against better opponents in the latter stages of the competition.

The one-time Wigan Athletic tactician uses a 3-4-2-1 formation. The width comes from the wide midfielders with the two behind the striker usually tucking inside to operate as No.10s. The front three often consists of Hazard, Mertens and Lukaku.

It's undoubtedly a strength and all three are goal threats – scoring a collective 56 goals in domestic and European football during the 2017/18 campaign while chipping in with 22 strikes during World Cup qualification.

When utilised properly, the Red Devils essentially have a little and large partnership on both sides of the pitch, with Mertens and Hazard making runs in behind Lukaku.

It's safe to assume that Martínez opted to use the three centre-backs to cover the imbalanced centre-midfield pairing usually made up of De Bruyne and Axel Witsel. However, it's a risk given the defence doesn't have the greatest amount of depth right now, with Toby Alderweireld only just returning from a long-term injury, while both Vincent Kompany and Thomas Vermaelen aren't the most reliable.

There are also concerns surrounding De Bruyne in this set-up. The Manchester City maestro thrived in the middle third in Pep Guardiola's system but did so thanks to Fernandinho acting as a safety net behind. It's a luxury he doesn't have with the national team and it will be a concern against teams such as Spain and Germany, who like to dominate the midfield.

The wide midfielders will be forced back into full-back positions and the midfield is liable to being overrun. It makes it difficult for the team to build an attack once possession is turned over – an issue that was apparent in the 3-3 draw with Mexico.

The Belgium boss wants De Bruyne to De Bruyne things, but he's, inadvertently, handicapping him by using him in this set-up and teams will view this as a potential weakness.

Belgium are a busy side. Of the teams who qualified for the World Cup from Europe, Martínez's men top the table for ball recoveries per 90 minutes with 63. Only the Netherlands (67), who failed to reach the finals, averaged more throughout qualifying.

The majority of the regains happened in the middle third but the Red Devils also posted an impressive number in the attacking third – the fourth-highest across Europe. It paints a picture of a high-energy side who press the opposition high up to make the most of the forward players they have at their disposal.

This also coincides with the number of shots they had per 90 minutes (21.6), which was, again, the fourth-highest across Europe. The quality of opposition they came up against no doubt influenced this number.

Paris Saint-Germain right-back Thomas Meunier is key to how they play. Deployed as a right midfielder, he's tasked with being the man to put crosses into the penalty area, the supplyline, and he carries out his job exceptionally well. He finished with seven assists during qualification – or 0.9 per 90 minutes, depending on how it's broken down – only second behind Joshua Kimmich (nine) for most assists.

It's a toss-up between Hazard and Lukaku simply because De Bruyne is nullified by the system he's being used in. The Manchester United striker finished qualifying with a 1.57 goals per 90 record – the third-best behind Cristiano Ronaldo and Robert Lewandowski. 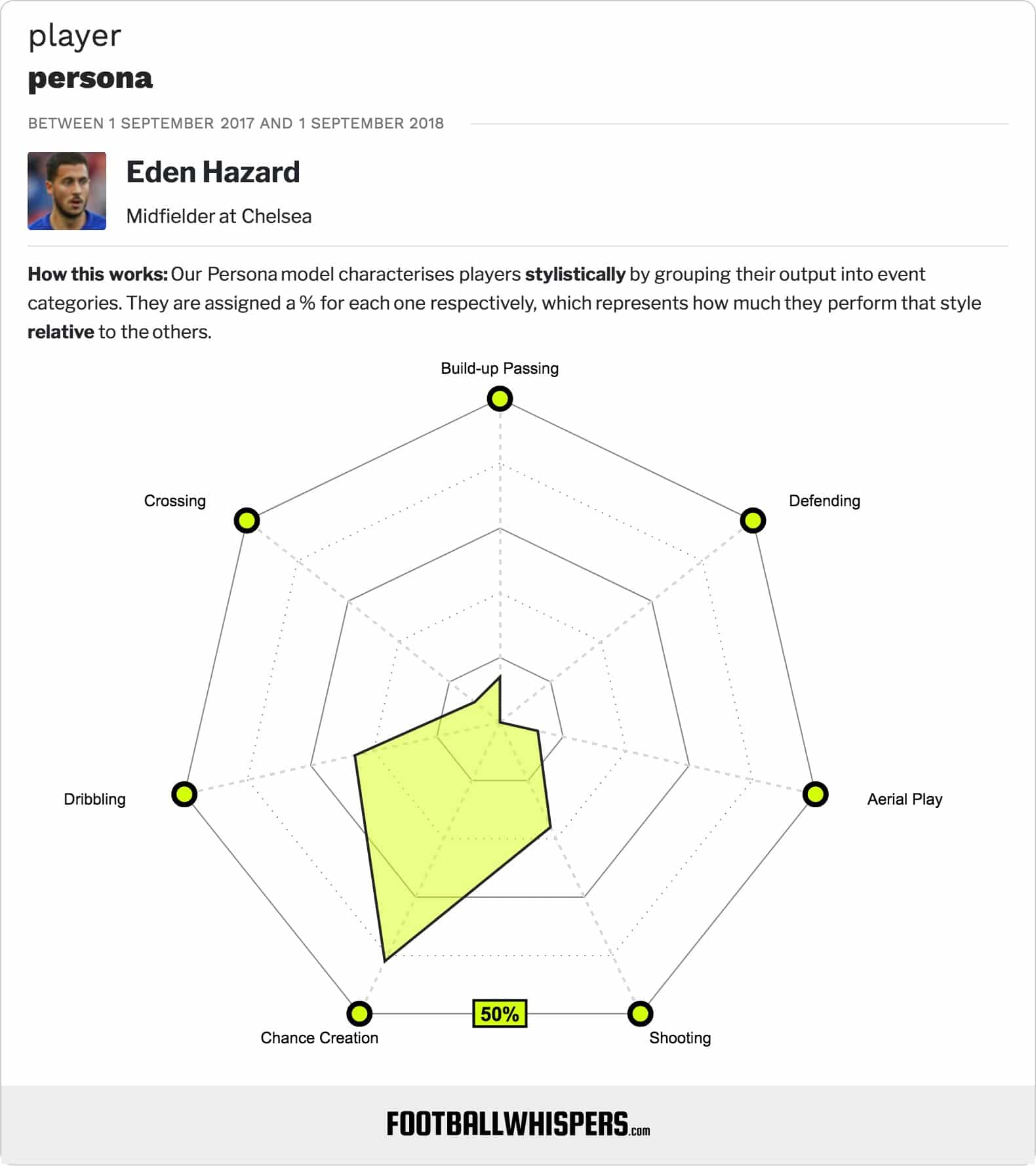 But the star player, the one who Belgium's success hinges on, is Hazard. The Chelsea playmaker averaged 0.89 goals per 90 during qualification, as well as completing 2.99 open-play key passes and 4.04 successful dribbles – the second-highest of those playing in Europe.

He's capable of turning a game on its head all by himself but he's also adapted to Martínez's system and there's an understanding with Mertens and Lukaku. The link which ties midfield and attack together.

Martínez has been loyal to his philosophy across four jobs now but it's hard to ignore his limitations.

He laid the foundations at Swansea City, won a historic FA Cup with Wigan Athletic and, for a period, had Everton challenging for a place in the Champions League.

It was clear that he wanted to play transitional football which relies on a particular type of player. He's not always had individuals of the requisite quality to execute this gameplan but he's not swayed away from what he wants to see on the pitch. And that's the issue, there's no plan B and there has never been.

His tactical hubris has been his downfall.

While the Belgium squad is filled with players ideally suited to this style – which is why it appears to be a perfect marriage – a true test of whether he's evolved as a manager will be when his team are tasked with switching it up.

The ‘Golden Generation' now needs to deliver. They're ranked third in the world for a reason and have a squad littered with players coming into their prime who would command transfer fees in the region of £100million if they were to be sold.

As previously mentioned, this is a team that thrives on counter-attacking situations, which makes them ideally suited to knockout football. A potential match against Brazil or Germany in the quarter-finals should be their first real test of the competition after the group game against England, and it's why it should be the minimum requirement from a star-studded Belgium side.