In November 2015, Denmark stepped into the unknown. Beaten by Sweden in a play-off, they had failed to reach the European Championship in France the following summer.

A day later, the Danish national team was plunged into uncertainty when Morten Olson announced that he would be stepping down from his role as head coach.

It was no great surprise. Olson had previously confirmed his intention to leave after Euro 2016, had Denmark qualified, yet it was still a significant moment, bidding farewell to the man who had overseen the national side's progress for 15 years.

However, in the experienced Norwegian Åge Hareide, Denmark were left in capable hands.

The 64-year-old, formerly of Brøndby, Malmö and the Norway national team, has introduced a more direct style of play, one which maximises the creativity of Christian Eriksen, and it seems to have paid off, with Denmark reaching their fifth World Cup (having previously featured in 1986, 1998, 2002 and 2010).

Denmark's qualifying campaign was a mix of the good, the bad and the ordinary. Having started with a steady but unspectacular 1-0 home victory over Armenia, they fell to a 3-2 in Poland before losing to Montenegro in Copenhagen.

Seven points from their next three games, against Kazakhstan home and away and Romania, sufficiently steadied the ship before smashing Poland 4-0.

It was that victory, against an erstwhile unbeaten Polish side that looked much stronger on paper, that seemed to represent the thrilling realisation of Hareide's philosophy: quick, progressive attacking and pressing the opponents high up the pitch.

Riskier than the possession-based brand of football espoused by his predecessor, sure, but Denmark were too quick, too organised and too ruthless to allow Poland a sniff, as Thomas Delaney, Andreas Cornelius, Nicolai Jørgensen and Eriksen scored to clinch a momentous win.

From there, Denmark recorded two wins and a draw from their final three games to finish four points clear of third-placed Montenegro and set up a play-off showdown with the Republic of Ireland.

A tight, defensively minded unit, Ireland were always going to be a tough nut to crack – and they were. Well, at least until the 29th minute of the second leg in Dublin, when, having shut out the Danes, the Irish floodgates opened when Cyrus Christie's own goal levelled things up after Shane Duffy's early opener.

Three minutes later, Denmark were ahead through Eriksen, who went on to claim an exquisite hat-trick as the Scandinavians romped to a 5-1 win. For Hareide, who had previously lost out to Czech Republic in the 2006 World Cup play-off with Norway, it was a moment to savour.

They are far from being mentioned in the same breath as Europe's typical heavyweights but the ease with which they tore through Poland and Ireland should act as a warning not to underestimate Denmark.

Hareide has not been afraid to instigate a radical departure from his predecessor's tried and tested possession-based model. Although regarded as one of the most important and influential figures in Danish football history, Olsen became somewhat unpopular in the latter stages of his reign for sticking with a system which enabled Denmark to dominate possession.

A lot of the time, though, it lacked purpose. Hareide's approach, in stark contrast, is refreshingly direct and more aggressive.

In midfield, it's usually Eriksen with Delaney and Lasse Schöne. Yussuf Poulsen and Uganda-born Pione Sisto are expected to start out wide while Nicklas Bendtner's injury has promoted Jørgensen to the first-choice striker.

While Denmark will be forced to sit back and try to contain France's frighteningly talented forward line, they will be expected to control the tempo against Peru and Australia. Those two nations are far from being pushovers, of course, but there is a feeling that Denmark possesses enough technical ability to enjoy the lion's share of possession while creating enough chances.

Hareide's system has certainly brought out the best in Eriksen, thus naturally intensifying the spotlight on him. Denmark are, at times, reliant on the Tottenham Hotspur midfielder when it comes to creativity, so the onus will be on Poulsen and Sisto to share the burden.

Hareide's tactics have been effective. Denmark have become one of the most efficient pressers, having won possession in the attacking third 5.33 times per 90 minutes during qualifying. In Europe, only Spain, Belgium and England won more.

Denmark like to work the ball out wide, too. In Sisto and Poulsen, they have two quick and willing outlets on the flank and they should be supplemented by runs from the full-backs, especially against Peru and Australia.

They averaged 21.41 crosses per 90 in qualifying and, although they are without the aerial prowess of Bendtner, Jørgensen scored four headed goals for Feyenoord last season so that is certainly an avenue worth exploring.

Eriksen, in case you hadn't guessed. The midfielder was the youngest player at the 2010 World Cup, making two substitute appearances as a fresh-faced 18-year-old. This time, however, Eriksen knows he will play a more prominent role and, having matured into one of Europe's finest playmakers at club level, possesses the confidence and ability to swing games in his country's favour.

However, while Olsen showed faith in Eriksen as a youngster, Hareide has better recognised the former Ajax midfielder's full potential. Hareide's system is shaped around liberating Eriksen in the final third. Allow others to do the grafting further back and unleash the 26-year-old in the final third, much like how Croatia boss Zlatko Dalić has sought to deploy Luka Modrić.

Already capped 77 times – a remarkable haul for a 26-year-old – there is a feeling that Eriksen's potential has been fully unlocked just in time for the World Cup. It will help, too, that he arrives in Russia on the back of a stellar season with Spurs, in which his form led to reports of him becoming a top Barcelona transfer target. 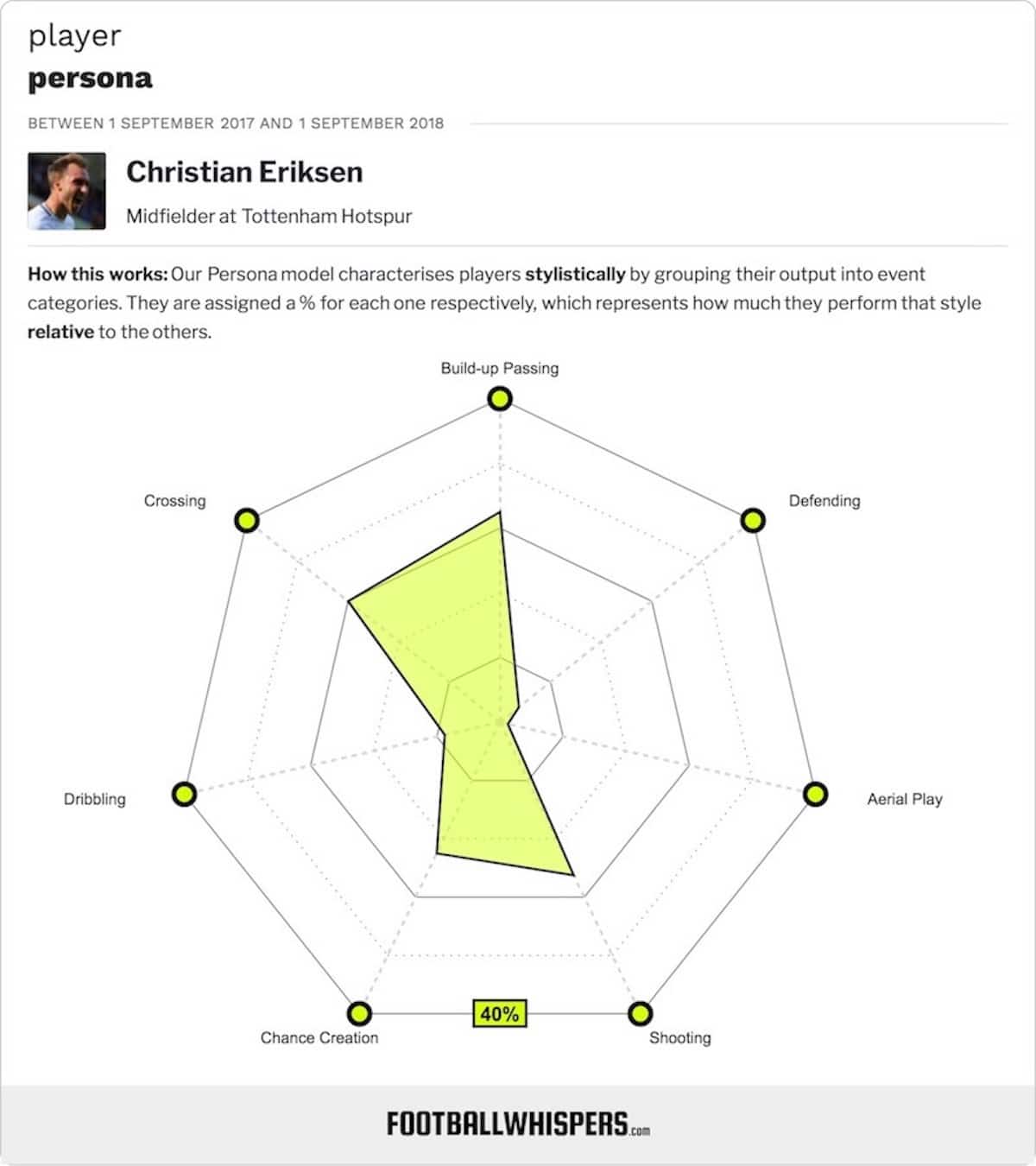 Hareide was not everyone's pick to succeed Olsen. At the time, Michael Laudrup was out of work, having left Qatari side Lekhwiya in June 2015. However, the Danish Football Federation had lined up Hareide as Olsen's replacement.

It didn't exactly capture the imagination of some fans, but Hareide arrived with a great deal of pedigree as the only man to have won league titles in Norway, Sweden and Denmark.

Believing it best to afford as much freedom to his star player as possible, Hareide has done what was asked of him, but not without ruffling a few feathers; when Denmark beat Ireland, Hareide sarcastically thanked his former Norwich City team-mate Martin O'Neill for the disastrously misjudged tactics which gave Eriksen the freedom of Lansdowne Road.

His sardonic tendencies aside, Hareide deserves credit for turning Eriksen into lynchpin he had always been tipped to be and for securing qualification after his predecessor had missed out on Euro 2016 and the World Cup two years prior.

Hareide's main challenge will be establishing a coherent strategy which highlights the collective talents of the team as opposed to heaping all the pressure on Eriksen.

That could mean an opportunity for one of Denmark's attacking reinforcements, perhaps Viktor Fischer, the brash Copenhagen striker, or gifted 20-year-old Kaspar Dolberg, who endured a mixed campaign in 2017/18 having shone for Ajax during the 2016/17 campaign.

Tempered, but quietly hopeful. Recapture the same level of work-rate and skill that saw them batter Poland and they could beat France. Failing that, they will still be expected to get at least four points from their games with Peru and Australia.

With France expected to top Group C, it's set to be an intriguing battle for second place. If Denmark achieve that, a last-16 clash with the winners of Group D – likely to be either Argentina – awaits.

If it pans out that way, the second round will be the end of the road for Denmark.