Twenty years ago, Croatia dared to dream. At France '98, they participated in the World Cup as an independent nation for the first time following the dissolution of Yugoslavia in 1992.

They were, unquestionably, the surprise package of that tournament, as Miroslav Blažević's side beat Germany, an impressive Romania team and the Netherlands to finish third.

When Davor Šuker scored the opener in Croatia's semi-final against France, fans from the Eastern European country were dreaming of glory. Of course, Lillian Thuram shattered that dream, but that summer remains the high-water mark for Croatian football.

In the two decades since, Croatia have flattered to deceive. Their squads are regularly comprised of talented playmakers, prolific strikers and imposing defenders but, in the three tournaments in which they have competed in since, they have failed to replicate their deep run in France.

They have been handed one of the toughest groups in Russia, pitted against Argentina, Iceland and Nigeria, but there is a belief that, should this current crop live up to expectations, they can experience the thrills – and heartaches – of knockout World Cup football.

Croatia were made to work before they booked their ticket to Russia. Drawn in a qualifying group which included Iceland, Turkey and Ukraine, it looked tricky from the outset.

However, six wins, two draws and two defeats proved enough to see them through to the play-off after finishing second behind Iceland.

Having been held to a frustrating 1-1 draw at home to Finland in their penultimate qualifying game, Croatia needed to beat Ukraine to ensure they finished second.

Going into the clash at the meeting at the Olympic Stadium in Kiev, the two nations were level on points but Ukraine blinked in a tense, as a second-half brace from Andrej Kramarić sealed Croatia's place in the play-off, where Greece proved to be reasonably obliging opponents, a 4-1 defeat in Zagreb effectively ending the Euro 2004 winners' World Cup hopes.

But the free-flowing, ruthless Croatia that swept Greece aside in the play-offs had gone missing during qualifying, to the point where it threatened their involvement in Russia and cost Ante Čačić his job.

Following defeats to Iceland and Turkey and the draw with Finland, Čačić was sacked two days before the crunch decider in Kiev.

A deeply unpopular figure with fans, the Balkan nation’s Football Association (HNS) had finally acceded to demands and cut ties with the former television repairman.

He was replaced immediately by Zlatko Dalić, who steadied the ship enough to secure qualification.

Dalić kept intact his predecessor's 4-2-3-1 system but made one significant change following his appointment: moving Luka Modrić higher up the pitch.

The Real Madrid midfielder has predominantly assumed a deeper role with his country but Dalić preferred to have his creative talents in the final third.

Deployed just behind Mario Mandžukić, Modrić impressed against Ukraine and Greece in a more advanced role. Crucially, Croatia looked balanced, too, with Milan Badelj and Marcelo Brozović coming in to co-anchor the midfield with Ivan Rakitić.

Indeed, in Croatia's most recent game, a 2-0 friendly defeat to Brazil, Dalić stuck to that midfield arrangement, with Rakitić and Badelj sitting behind a three of Modrić, Ante Rebić and Ivan Perišić and Kramarić up front.

Thanks to his two-goal salvo against Ukraine, Kramarić is the favourite to start in attack but, with Mandžukić and Nikola Kalinić in reserve, Dalić has plenty of experience and pedigree at his disposal.

The backline is a different issue, however. Domagoj Vida, Dejan Lovren and Vedran Ćorluka will compete for the two centre-back slots but there are question marks over the latter's fitness – and mobility – as well as the Liverpool defender's reliability.

Modrić's move further up may see Croatia focus much more of their attacks through the middle. During qualifying, they averaged 25.16 crosses per 90 minutes, illustrating how Čačić's set-up had emphasised attacking down the flanks.

It is interesting, too, that Croatia won possession in the attacking third 3.33 times per 90. They are not the most ardent pressers but relish the battle in midfield, having averaged 27.75 per 90 in possession won in the middle third.

Croatia are not the most shot-happy nation either, averaging just 12.91 efforts on goal per game. Of the European countries to have qualified, only Serbia and Sweden average less.

Quite surprising, too, is Croatia's big chances created tally. An average of 1.41 per 90 sees them ranked 15th of the 32 teams, but perhaps their dearth of invention was a driving factor in Dalić reverting Modrić back to a No.10. 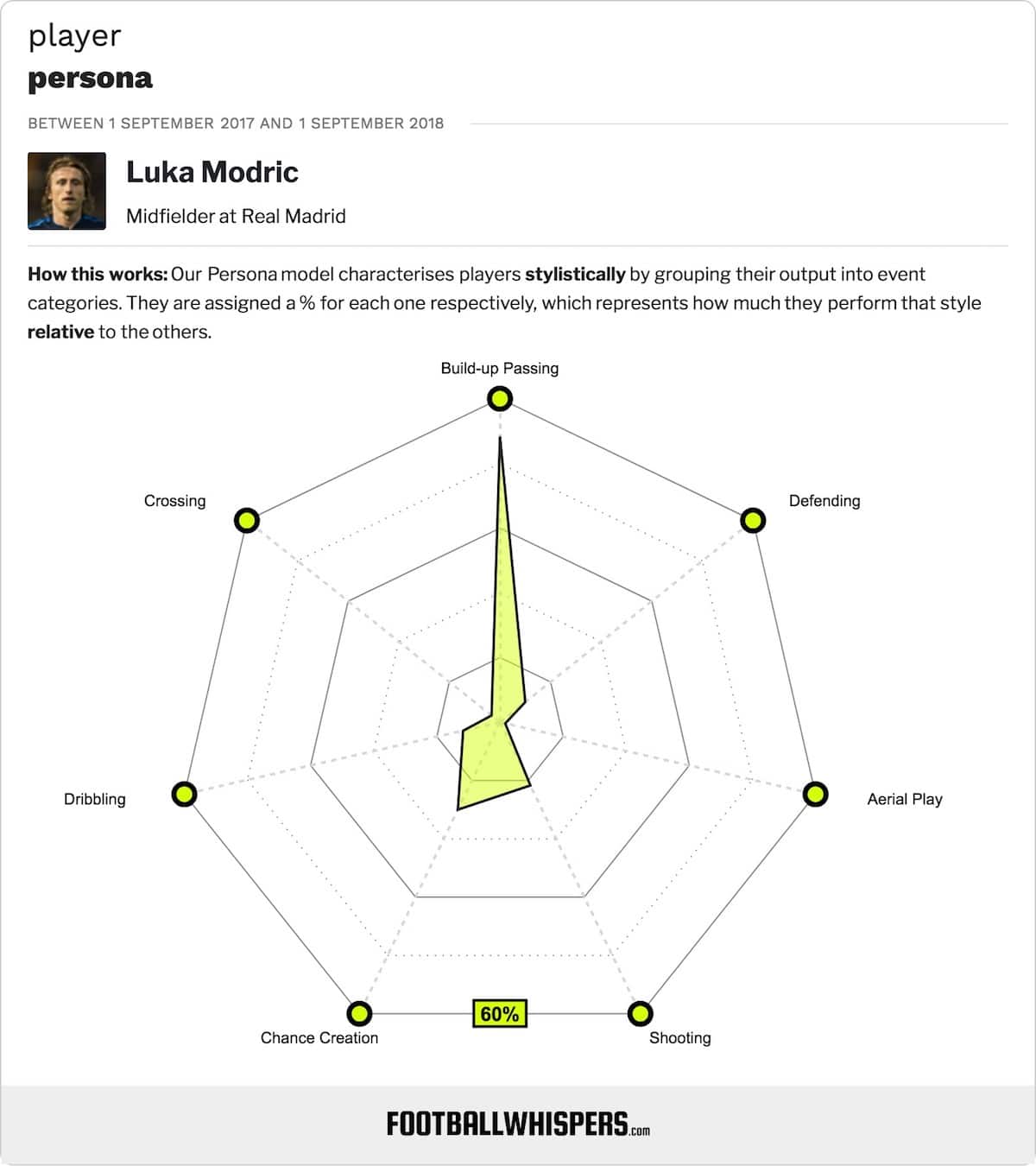 Mandžukic was the highest scorer during the qualifiers, while much is expected of Kramarić, who has thrived at Hoffenheim following a fruitless venture to England with Leicester City, but it's difficult to look beyond Modrić, the captain and irrefutable talisman.

Now 32, there is a strong possibility that this will be the former Tottenham Hotspur playmaker's World Cup swansong. He has remained crucial to Croatia's chances throughout their journey to Russia, having completed more accurate passes (556), won possession more times (67) and took more touches (855) than any of his compatriots.

His switch to a more advanced role means he will see less of the ball in the tournament but the hope is that Modrić's vision combined with Kramarić's movement will prove to be a devastating link-up.

Above, you can see Modrić's Player Persona radar based on his performances with Real Madrid. During the World Cup, though, you can expect it to be less concentrated towards build-up passing with chance creation perhaps becoming more prominent.

Dalić was a curious choice as Čačić's successor. Having spent most of the last decade coaching in Saudi Arabia, appointing him immediately before an enormous game against Ukraine was a courageous step by the higher-ups.

But it worked. Croatia have made it and Dalić has the opportunity to recapture the magic of '98 with a tilt at the knockout rounds. Croatia certainly have the quality and technical ability; the most challenging proposition for Dalić is still finding defensive solidity and structure.

But Dalić knows some of these players well, having served as Croatia Under-21's assistant manager for five years between 2006 and 2011, working with Kramarić, Rakitić and Mateo Kovačić among others.

He has certainly benefited from being a more embraced figure than Čačić who, if you ask some people, was doing his best to ruin one of the most talented generations in Croatian football history.

That included Modrić, who bemoaned a “catastrophic situation” following the draw with Finland which ultimately proved to be the last straw for Čačić.

In stark contrast, Modrić threw his support behind Dalić, hailing a “phenomenal job” in securing Croatia's place at the tournament.

He may not be the most high-profile coach at the World Cup but Dalić appears to have won the trust of players and fans alike – and that counts for a lot.

Group D is tough to call. On paper, Argentina are undoubtedly the strongest but they have been erratic under Jorge Sampaoli. Iceland and Croatia seem evenly matched, with both sides picking up a home win in their two qualifying encounters.

Then there is Nigeria, who beat Argentina 4-2 seven months ago and looked far from pushovers once they got going in the second half against England last week.

If we were to call it, Croatia will go through in second behind Argentina, which would set up a last-16 clash with the winners of Group C (most likely France).

Croatia will fancy their chances against Nigeria in the opening game and, should they pick up three points early on, it could provide the surge of momentum to see them through to the last 16.