Diego Maradona spent seven years at Napoli and was adored by the club’s fanatical fans as he guided them to un-precedented success. Having landed the superstar from Barcelona he went about conquering Italy's notoriously mean defences as Napoli claimed their first ever Scudetto and conquered Europe.

When the world’s greatest player signed for unfashionable Napoli it was the equivalent of Lionel Messi joining Watford, such was the size of the coup that this provincial side based in the south of Italy had managed to pull off. The only difference was that the young Diego was only starting out on his path to greatness whereas Messi is nearing the end of his career.

Maradona had made his name during spells at Argentinos Juniors, scoring 116 goals in 167 games before moving to Boca Juniors where he was similarly effective; but it was when he moved to the Nou Camp and joined Barcelona that he really rose to prominence on the world stage.

It didn’t start out too well though. In World Cup in his soon to be native Spain in 1982 – where he was kicked from pillar to post by players who were unable to cope with his skill and trickery – his tournament ended prematurely when he was sent off in a bad tempered defeat to Brazil. He didn’t know it at the time but that tournament would turn out to be something of a bad omen for the young man from Lanús.

And if Maradona had thought his World Cup experience had been a forgettable one, his time at Barcelona wasn’t much better either. Following his record £5 million signing earlier that summer and despite winning the Copa del Ray in his first season, things soon turned sour during the remainder of his time at the club and he never really recovered.

Hepatitis and a broken ankle in those first 12 months had threatened to bring an early end to his career, but such was his supreme fitness and strength of mind these were merely minor obstacles on what many thought would be a long and fruitful journey with Barca.

Ultimately, what did end his time with the club was to be much more of his own making and something far more bizarre which would severely damage the little magician’s reputation with the club.

A full on fight in the Copa Del Ray final of 1984 against Athletic Bilbao would be his undoing after he confronted a number of opponents at the end of a bad-tempered affair which saw him lash-out and head butt several opposition players.

The Bilbao squad surrounded Maradona looking to dish out a little retribution of their own before the rest of the Barcelona squad steamed in to help their man. From this point on the Barcelona and Bilbao players brawled violently with Maradona in the centre of the action, lashing out at anyone within reach.

Dozens were injured in the mass brawl which took place right in front of the Spanish King Juan Carlos, thousands of fans and millions of people watching on television around Europe; it proved to be the final straw for both player and club.

The ugly scenes came about after two frustrating seasons which had seen endless battles between the player and club officials, particularly club president Josep Lluís Núñez.  One Barcelona executive later said, “When I saw those scenes of Maradona fighting and the chaos that followed I realized we couldn't go any further with him.”

During his two injury-ravaged seasons at Barcelona, Maradona scored 38 goals in 58 games and won the Spanish Cup, League Cup and Super Cup but that didn’t stop him wanting out, complaining that the “snooty” Catalans made Latin Americans feel like “second-class citizens.” His predictably brief stay in Barcelona was over, but few could have predicted where he would go next.

In the two decades before the arrival of Diego Maradona, Napoli had won just a handful of honours, including two Coppa Italia successes in 1962 and 1976. But the club still had a huge and fanatical fan-base despite not winning much; but that was about to change.

The Naples club needed something to change their fortunes and rebuilding the squad would be a good way of going about it. New recruits Simone Boldini, Salvatore Bagni, Walter de Vecchi, Domenico Penzo and Daniel Bertoni heralded something of a changing of the guard, but one signing would prove to be the spark the struggling club so desperately desired.

The arrival of Maradona for a record £6.9 million fee would prove just the catalyst that Naples needed, thanks to local politician Vincezo Scoti using his connections with Italy's bankers to secure Napoli a generous loan deal.

The passionate, yet volatile attacker was heading to a city, that lived-and- breathed football which had been starved of success, having never won the title and who were longing for an idol. Now they had a genuine hero they could call their own and the best part of 100,000 people queued for hours and paid 1,000 lira just to see him kick a few balls around. 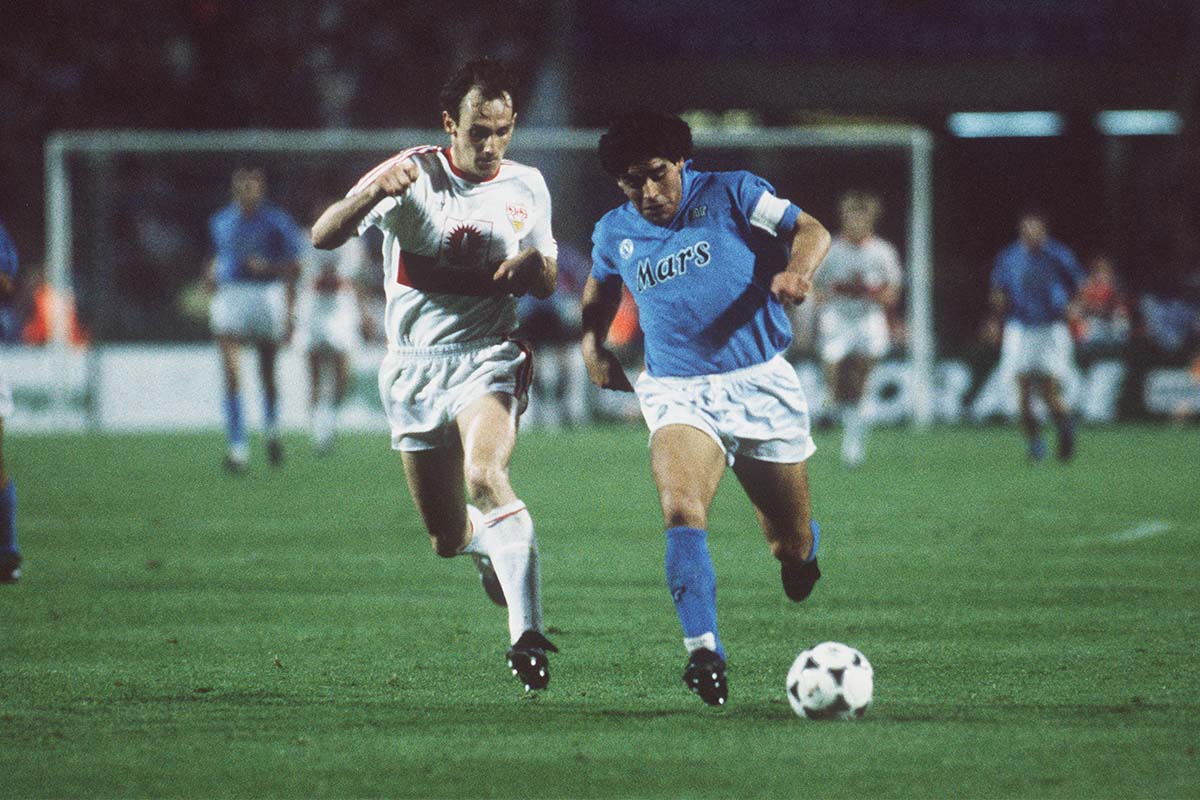 Maradona was the ideal target for their adulation. He was whole-hearted, passionate and capable of doing just about anything with a football, exactly what they wanted. And after a packed San Paolo Stadium welcomed their saviour on that hot July evening in 1984, wearing a Napoli scarf and doing a lap-of-honour, it was love at first sight, not just for the supporters, but the player too.

60,000 season tickets were sold for Maradona's first season in Naples, and one newspaper even made it clear that, “Despite the lack of a mayor, houses, schools, buses, employment and sanitation, none of it matters because Naples has Maradona!” But optimism was initially kept to a minimum after an ordinary start, which saw the superstar and his new club finish eighth in Serie A.

there were more signs of progress the following season, however, when Napoli finished third and Maradona’s performances became more and more pivotal. Under the guidance of new coach Ottavio Bianchi he was supported by the additions of Alessandro Renica and Bruno Giordano, meaning Maradona was given more of a free role.

On the back of single-handedly guiding Argentina to the 1986 World Cup in Mexico, while also scoring one of the greatest goals in history against England in the quarter-finals – Maradona and his Napoli colleagues were primed and ready to mount an unlikely assault on the Italian title. Lofty ambitions seeing that no Italian club from the south of the country had ever won the title before.

And sure enough, El Pibe, or the kid, as he was affectionately known in his adpoted city, inspired the Azzurri to their first ever top-flight title as the club from the Bay of Naples simply had too much passion for the wealthier clubs in the north. With a draw against Fiorentina in the penultimate game of the season they were crowned champions, having seen off defending champions Juventus, complete with Michel Platini, Michael Laudrup and Italian World Cup winner Antonio Cabrini.

The scenes that greeted the news that Napoli had achieved the unthinkable and won the league completely overshadowed those when Maradona signed as impromptu street parties broke out across the city in a carnival which went on for days. The club that were perpetually mocked by those seen as the more fashionable of Italian football finally had their moment in the spotlight and they were going to enjoy every last bit of it.

It was pure bedlam across the city as Naples – a city that needs little excuse when it comes to public shows of emotion – had the greatest reason ever to stage a party. The roads ground to a halt due to cars honking their horns and waving scarves while scooters and motorbikes zoomed across the city with banners and blue and white flags.

There was no doubting who the fans felt was responsible for this monumental turnaround in the  fortunes of a club who, until recently, had been laughed at by their rivals from the more wealthy and affluent northern cities and called “donkeys.” A local car dealership offered to give Maradona a brand new Mercedes every six months, while a shoemaker vowed to provide the captain with two pairs of handmade brogues every month as long as he stayed in Naples. 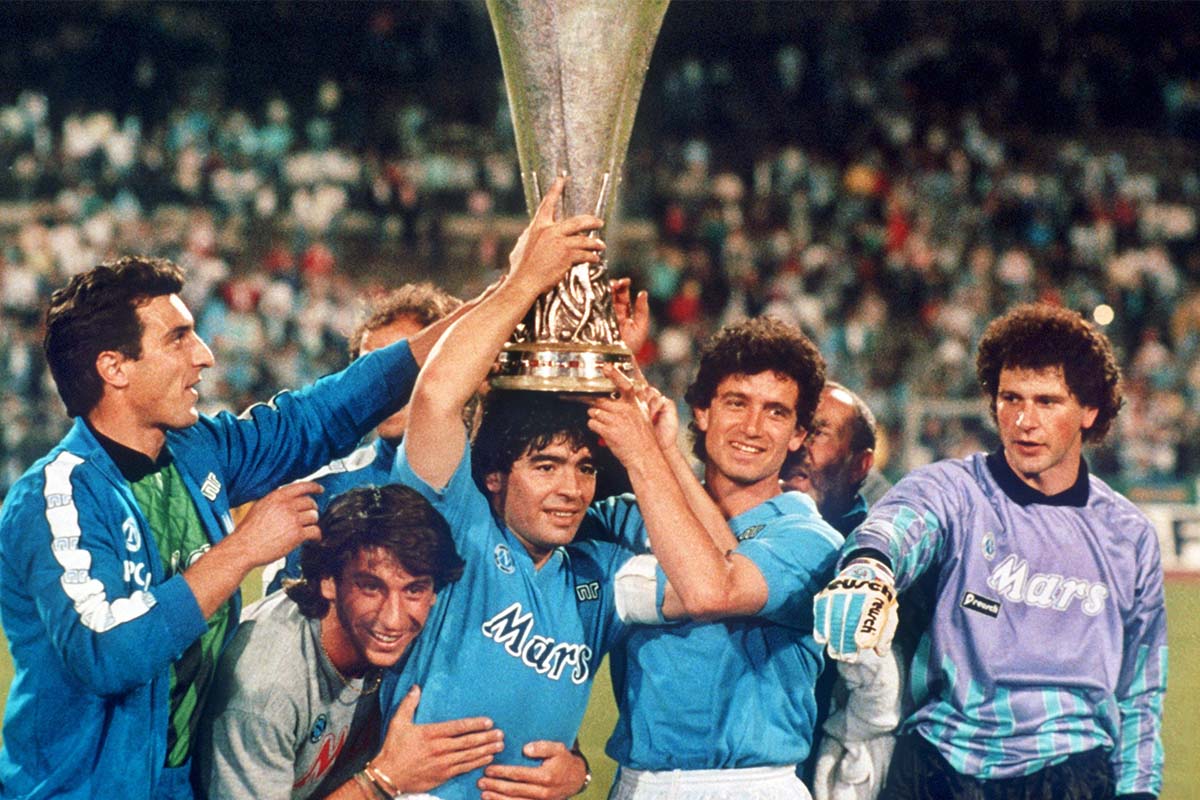 And Napoli’s joy didn’t end there. Having secured the league title they then sealed a historic double by winning the final of the Coppa Italia witha convincing 4-0 win over Atalanta. Another huge street party soon broke out on the streets of Naples.

The club’s glory wasn’t just confined to domestic football either, in 1989 Napoli won the UEFA Cup after a 5-4 aggregate victory over Stuttgart, much to the delight of the Neapolitans. “We dreamed about this, and now we're here in reality,” said Maradona before collecting the trophy.

Maradona's love affair with Naples continued as he lead the club to another Serie A title success in 1990 thanks to 18 goals in 36 games, but things were soon to turn sour.

El Pibe eventually left Napoli in 1992 under something of a cloud thanks to cocaine abuse, womanising, mob stories and bans for various misdemeanours and the club’s decline was almost as rapid as their rise to glory in the late 1980s. Just a decade after winning the league title they found themselves in Italy’s second tier as stories of corruption and match fixing overshadowed the organisation.

However, a recent resurgence has seen the Azzurri once again climb back into the big league, no doubt prompting their fanatical supporters to dream once again of bringing the Scudetto back to the Bay of Naples; but if they are to do the unthinkable this time it will have to be without their inspirational talisman, club legend and one of the most influential and talented footballers ever to play the game who is still worshipped in these parts.