The vultures are circling for Rúben Vinagre.

The 20-year-old Wolverhampton Wanderers wing-back is yet to fully establish himself at first-team level at Molineux, but word of his talent has travelled, with Liverpool and Barcelona reportedly readying moves for the youngster.

And not without reason: the man Wolves paid £10million to sign from Monaco just last summer has the potential to be one of the best in Europe in his position, and in his limited game time this season he has already proven as much.

Part of the Portuguese invasion of the Black Country, unlike compatriots Rúben Neves, João Moutinho and Rui Patricio, Vinagre was acquired with one eye on the future, rather than with the intention of instantly impacting Wolves' rapid rise up the Premier League table. 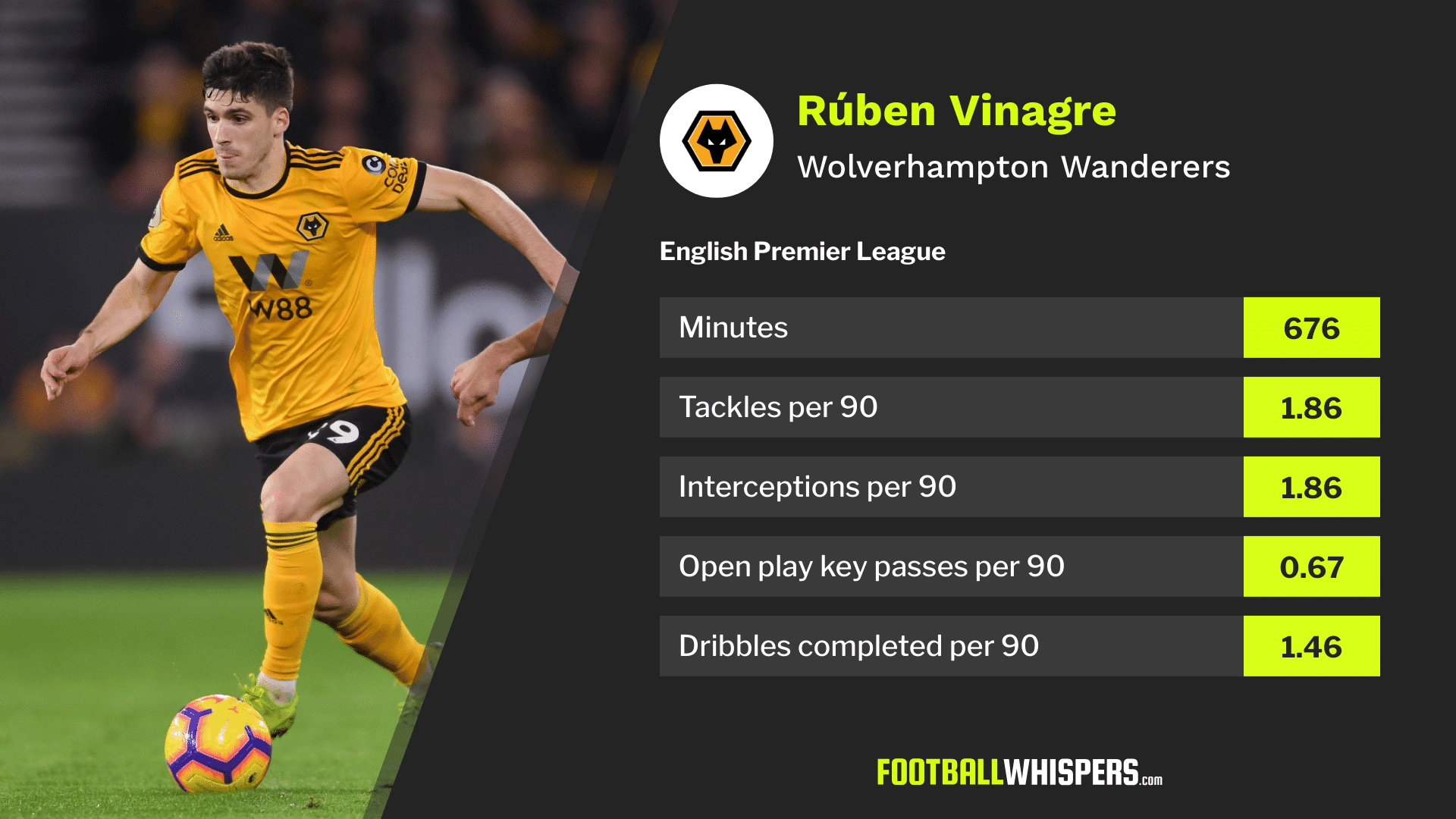 Headline-grabbing recent additions have ensured Wolves' quick ascent, but it is the acquisition of gifted young hopefuls like Vinagre through whom the club's medium and long-term goals with be realised. Spotting such high-potential players early and snapping them up before the continent's super-powers get involved is a sound strategy.

Keeping those youngsters long enough for them to mature into players of the calibre to aid a gatecrashing of the Premier League's exclusive club is another matter, though. That's the challenge Wolves face with Vinagre.

Schooled in Sporting CP's academy, it's no surprise that Vinagre's enthusiasm and inventiveness in high, wide positions is his key asset. From Luís Figo to Ricardo Quaresma and, of course, Cristiano Ronaldo, some of Europe's greatest wide men have been reared in Sporting's youth set-up.

Vinagre's speed carries him forward with purpose – and doubles as handy recovery pace when caught out of position defensively. What is most interesting about his dribbling style is the way he shields the ball when taking on an opponent, astutely positioning his body to deny his tracker a clear swipe at dispossessing him.

Breaking down the left, he has a full armoury of crossing techniques at his disposal, from whipped, low efforts that flash through the penalty area, to high, swinging deliveries to the back post. And although he is left-footed, he is competent enough on his weaker side to provide dangerous crosses, enabling him to cut back and curl over an in-swinging centre or break for the byline.

Unconventional for a player in his position, Vinagre is often seen driving infield when he receives the ball. This leaves his opposite number with the conundrum of whether to follow his central movement and risk being pulled out of position, or stay put and allow the Wolves man to move dangerously into space.

When sauntering centrally, Vinagre's crisp, accurate and incisive passing comes to the fore, switching play or breaking the opposition's lines with technique more associated with a No.10.

Only 20 years old, there are still areas of his game Vinagre must improve if he is to truly fulfil his potential, most notably on the defensive side. But even his defensive skills have shown signs of serious progress this season. In January's FA Cup victory over Liverpool, no player on the pitch could top his tally of four tackles, while he remained a threat in attack, delivering a game-leading six crosses.

And in the recent Premier League win over Manchester United at Molineux, just his seventh top-flight start of the season, his three interceptions was bettered only by midfielder Leander Dendoncker.

Vinagre initially joined Wolves on loan from Monaco two summers ago, and even during their Championship promotion campaign last season he was used sparingly, starting just eight times.

But the fact manager Nuno Espírito Santo has started him in games against such opposition as Liverpool and United speaks to the confidence the Portuguese coach has in his young wing-back. And Vinagre invariably impresses, leading to calls from some sections of the support for the youngster to usurp the more experienced Jonny as the top pick for the left flank.

Part of a gifted generation of Portuguese prodigies who claimed European Championship success at under-17 level in 2016 and repeated the trick as under-19s two years later, Vinagre has the potential – whether ultimately as a full-back, wing-back or winger – to develop into one of the finest wide players on the continent.

That's why Barcelona and Liverpool want him. That's also why Wolves must keep him.