Their talent is unquestioned. Their genius unrivalled. And they all share one indisputable quality: unwavering self-belief.

No matter the technological advances, the sports scientists, nutritionists, fitness coaches, cryotherapy chambers and so much more, confidence will always be the difference-maker in sport. Those who have it often flourish; those who don't, struggle.

Which brings us to Tammy Abraham. The 20-year-old has spent the first half of the season on loan at Aston Villa from Chelsea. He has scored 16 goals in the Championship in just 20 appearances. And is now wanted by Premier League side Wolverhampton Wanderers.

Abraham could play it safe and stay at Villa. More goals would follow, as would the acclaim. Or he could back himself and head to Wolves.

It would be a risk. A step into the unknown. Who's to say he would displace Raúl Jiménez and start regularly? Yet these are worries that are unlikely to have festered in Abraham's mind.

And that's because he is one of those sportsmen with unshakable confidence. Which was proven in an interview at the age of 19.

When asked what he wanted to achieve in his career, there was no playing down of his ambitions. No desire to be safe. Abraham made it clear.

Perhaps, one day, Abraham will achieve his goals. Maybe that will happen at Chelsea. The Blues certainly have developed a penchant for collecting major trophies since Roman Abramovich bought the club in 2003.

Yet the striker, as harsh as it sounds, will never be given an opportunity at Stamford Bridge unless he proves himself capable of shining in the Premier League. And that is where Wolves come in.

From Villan to wolf?

If Abraham hadn't already proven it during a loan spell at Bristol City two seasons ago, then his stint at Villa Park has confirmed he is too good for the Championship.

His movement is too evasive for defenders in the English second tier. His calm head in front of goal that of a seasoned veteran. He gets through a fair amount of work defensively, too.

But there are areas to improve. His link play needs finessing, especially if he is to one day make it at Chelsea, and that contributes to the fact that he doesn't create many scoring opportunities for his team-mates. 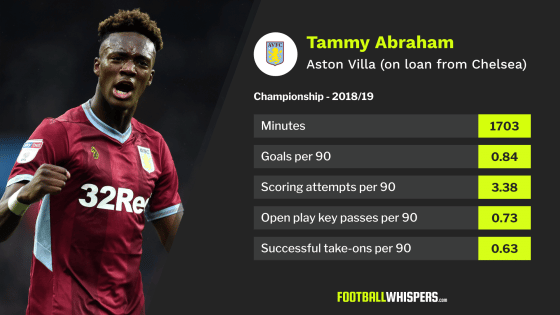 Yet Wolves already have a well-rounded striker in Jiménez. The Mexican is in the top 15 Premier League attackers for aerial duels won, open-play key passes, interceptions, tackles, accurate passes and scoring attempts.

When it comes to goals, though, he falls short. His six league strikes in 21 appearances is a respectable return for a frontman in a newly promoted side, but his expected goals (xG) total for the campaign is 10.08.

What that suggests is that the 27-year-old has either been very unfortunate or he isn't a ruthless finisher. Given he hasn't broken the 15-goal mark since arriving in European football in 2014, you suspect it's the latter.

This is where Abraham can come into his own. Wolves are not a side who struggle to create chances – their total xG of 24.32 is the fourth highest in the Premier League – and as shown below, they fashion high-quality opportunities in the penalty area. 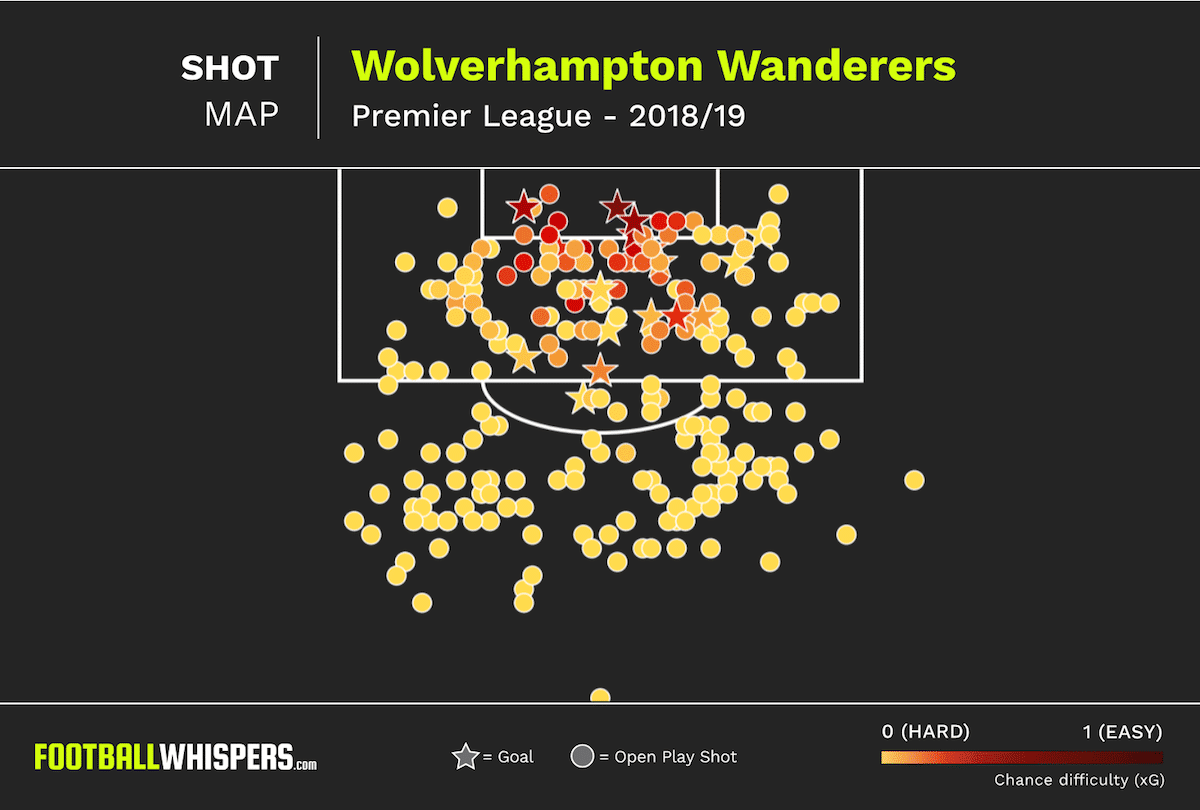 The wing-backs – Matt Doherty and Jonny – in Wolves' 3-4-3 shape have been hugely effective this season and tellingly, of their 17 Premier League open-play goals, nine have been a direct result of a cross into the penalty area.

That is ideal for Abraham, whose Aston Villa highlight reel is filled with goals from balls into the penalty area.

The below stills are taken from Villa's 3-0 win over Derby County in November; it is a typical goal for the Chelsea loanee. 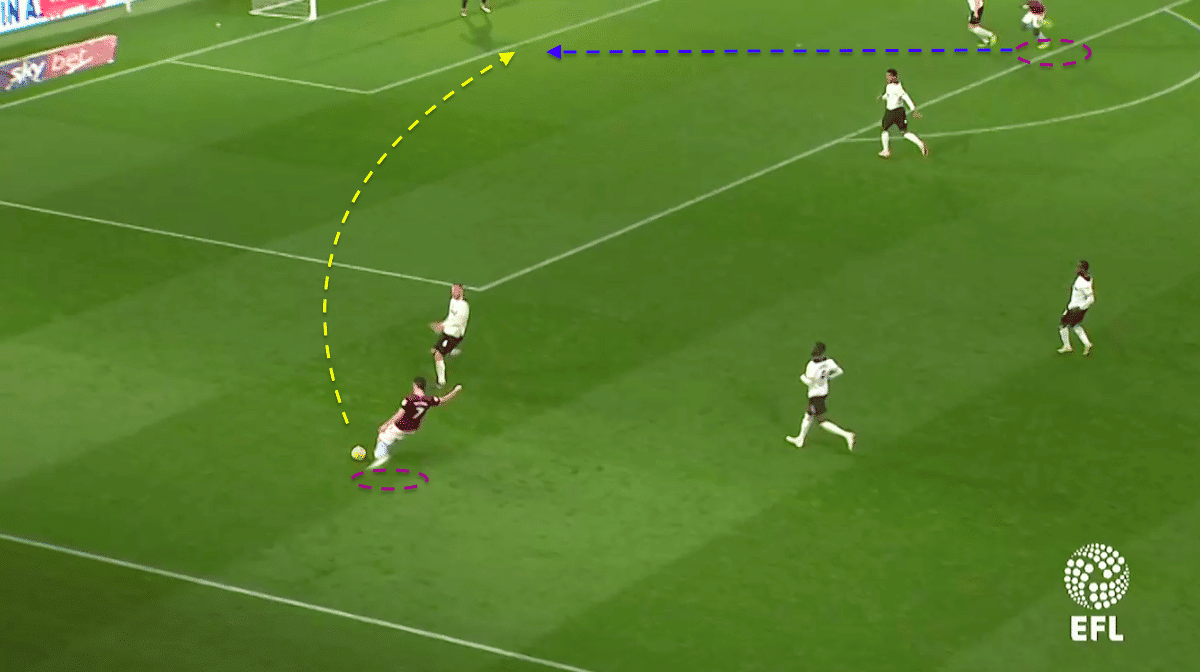 When John McGinn looks up to play his cross, Abraham is behind Rams defender Richard Keough. But he anticipates the flight of the ball far earlier than the centre-back and makes his move. 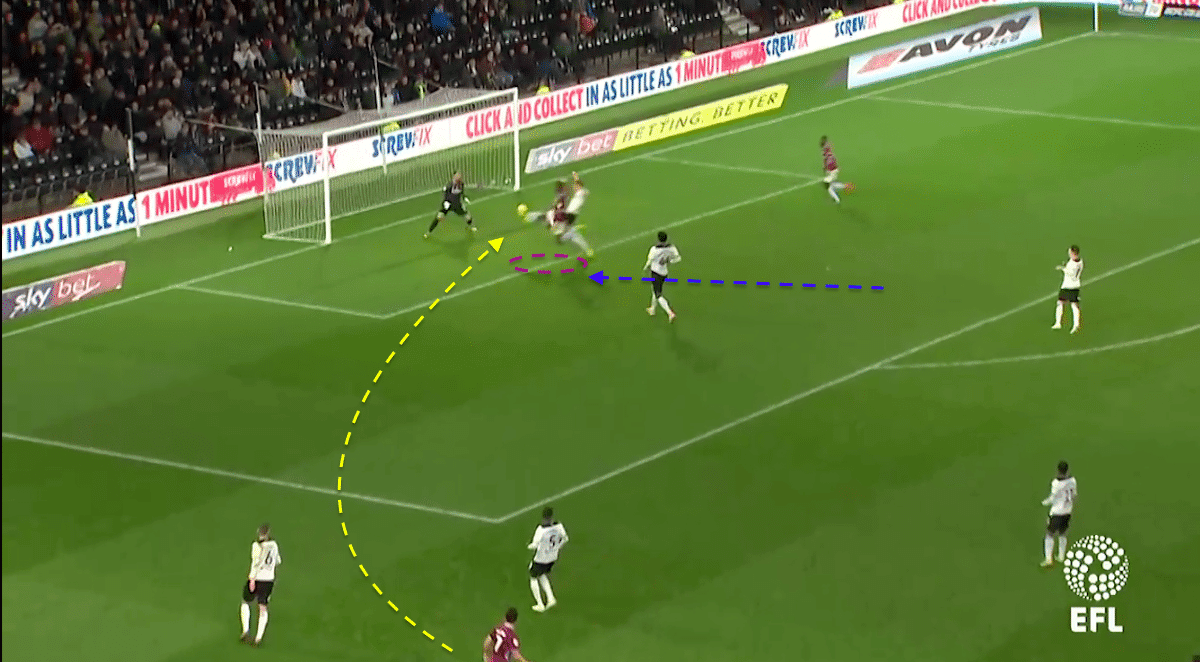 From then on the finish is simple; a delicate touch with the bottom of his foot to guide the ball past Scott Carson from close range.

With the right service, against a high defence or a low block, Abraham will score goals. Wolves' 4.09 accurate crosses per 90, the ninth highest in the Premier League, is just that.

He may not be ready for Chelsea but Abraham is ready for the top flight. Wolves can give him the platform he craves. One from which he can start to make his big dreams a reality.