Hull City boss Leonid Slutsky hasn’t taken too well to Championship life. Despite his side only suffering Premier League relegation last season, they languish in 20th in England’s second tier.

He hasn’t really judged the league that well so far, even if he’s been working in difficult situations.

But in August, he saw his side beaten 3-2 at home by Wolverhampton Wanderers, and hailed Nuno’s team.

“We played the best team in the league,” Slutsky said. “I have done a lot of research. Wolves are, at this moment, the best team.”

And ever since then, Wolves have been favourites for promotion and the Russian has been proven right.

They currently sit four points clear of second-placed Cardiff City and are 15 points ahead of Middlesbrough, who sit in seventh.

It’s early days of course, and you don’t want to count your chickens before they hatch, but it seems like they are heading for the Premier League.

And does that make them the best ever Championship team? We’ve had a look at some of the other contenders to see what they have to live up to.

“We’ve got the record, 106!” If you’ve ever been to the Madejski Stadium, you’ll definitely have heard that.

In a gruelling Championship season, anything more than 100 points is a great achievement, and Reading only lost two matches all season – the first game, against Plymouth Argyle, and the 35th match, against Luton Town.

They are the team that everyone speaks about when talking about outstanding Championship teams.

Last season, Newcastle United were meant to be the best team the league has ever seen and there was talk about whether they could beat that record – they managed just 94 points.

It wasn’t just down to one outstanding player either, with both David Kitson and Kevin Doyle managing 18 goals each.

Leroy Lita and Steve Sidwell also chipped in with 11 and ten goals respectively too.

“It was some achievement and if someone does beat it then fair play to them,” Sidwell told GetReading last year.

“Everyone put a shift in because it says that in the record books. I think every outfield player scored so that goes to show everyone did their job defensively and offensively as well.

“Team spirit probably won us more games than individual brilliance because at the time everyone lived in Reading.

“We were quite a young team, everyone socialised off the pitch and that made a big difference on the pitch.

“It wasn't just all the lads, it was the wives and girlfriends getting involved as well.

“There was a lot of charity work within the season so it was a special moment in all the players' careers as well as the history of Reading FC.”

After the second tier in English football rebranded to become the Championship, Newcastle under Chris Hughton were only the second side to ever get over 100 points.

Following relegation from the Premier League, pre-season was dominated by uncertainty over the manager, the owner and the players, but Hughton was made caretaker manager and his form meant he got the job permanently in October.

They spent almost all of the season in the top three in the division, and they were automatically promoted by Easter, before being named champions two weeks later, finishing the season on 102 points.

Speaking after clinching the title, Hughton said: “I think we got to a stage where we couldn't shout from the rooftops but we were comfortable that we were going to go up.

“We got to that stage and probably for a little while it has been about winning the title and I couldn't be any prouder of this group of players.

“We have probably had one blip during the season, they came back from that strongly and went on a very good run.”

Once again, the goalscoring was shared, with Kevin Nolan and Andy Carroll both on 17, while Peter Løvenkrands managed 13 and Shola Ameobi got ten. 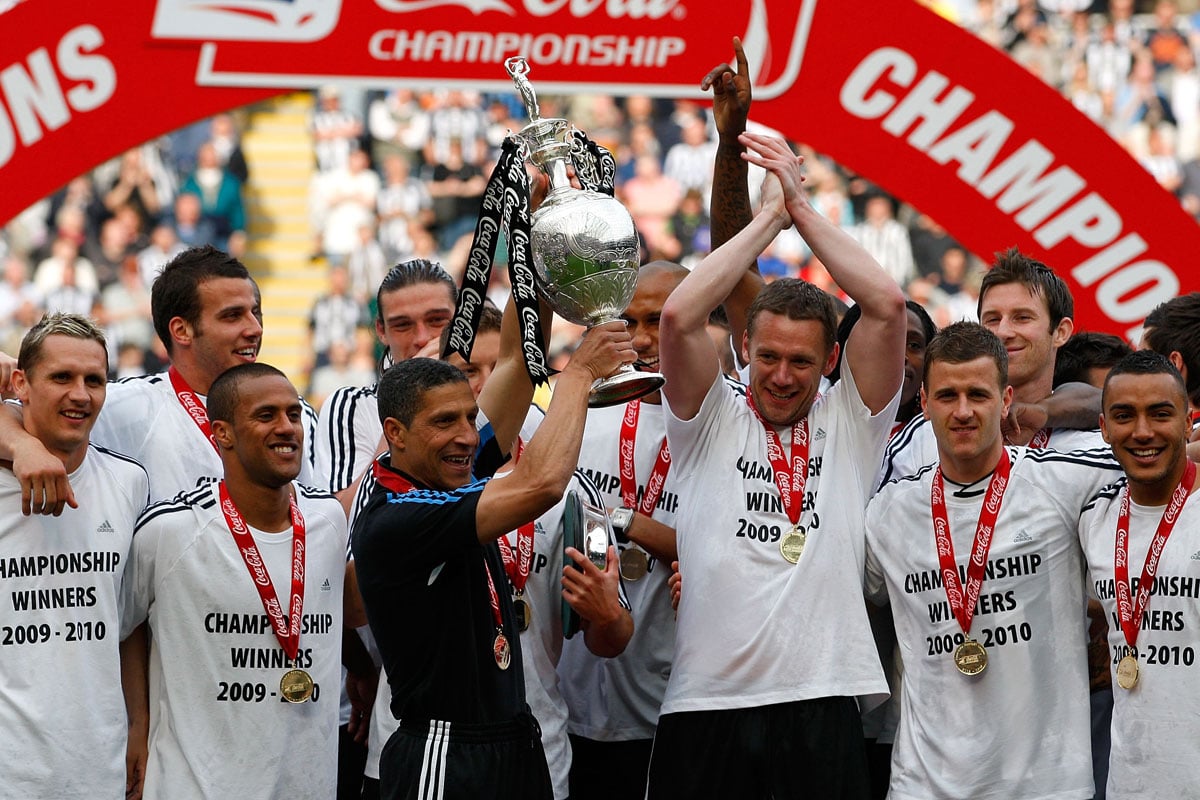 The only other side to reach more than 100 points in Championship history was Leicester City, and perhaps we should have taken more notice of them – just two years later they won the Premier League, with the same talisman – Wes Morgan, Danny Drinkwater, Jamie Vardy and Riyad Mahrez.

Once again, there were various players scored 10 goals or more, with Lloyd Dyer getting ten, Vardy managing 16 and David Nugent grabbing 20.

Like Wolves, Leicester had been out of the top-flight for a while.

They also showed what can happen when things go right after promotion and winning becomes a habit.

Their Championship season may not be as well remembered as Newcastle’s, despite getting 102 points, or Reading’s, but what they achieved after shows just how good that group of players was. 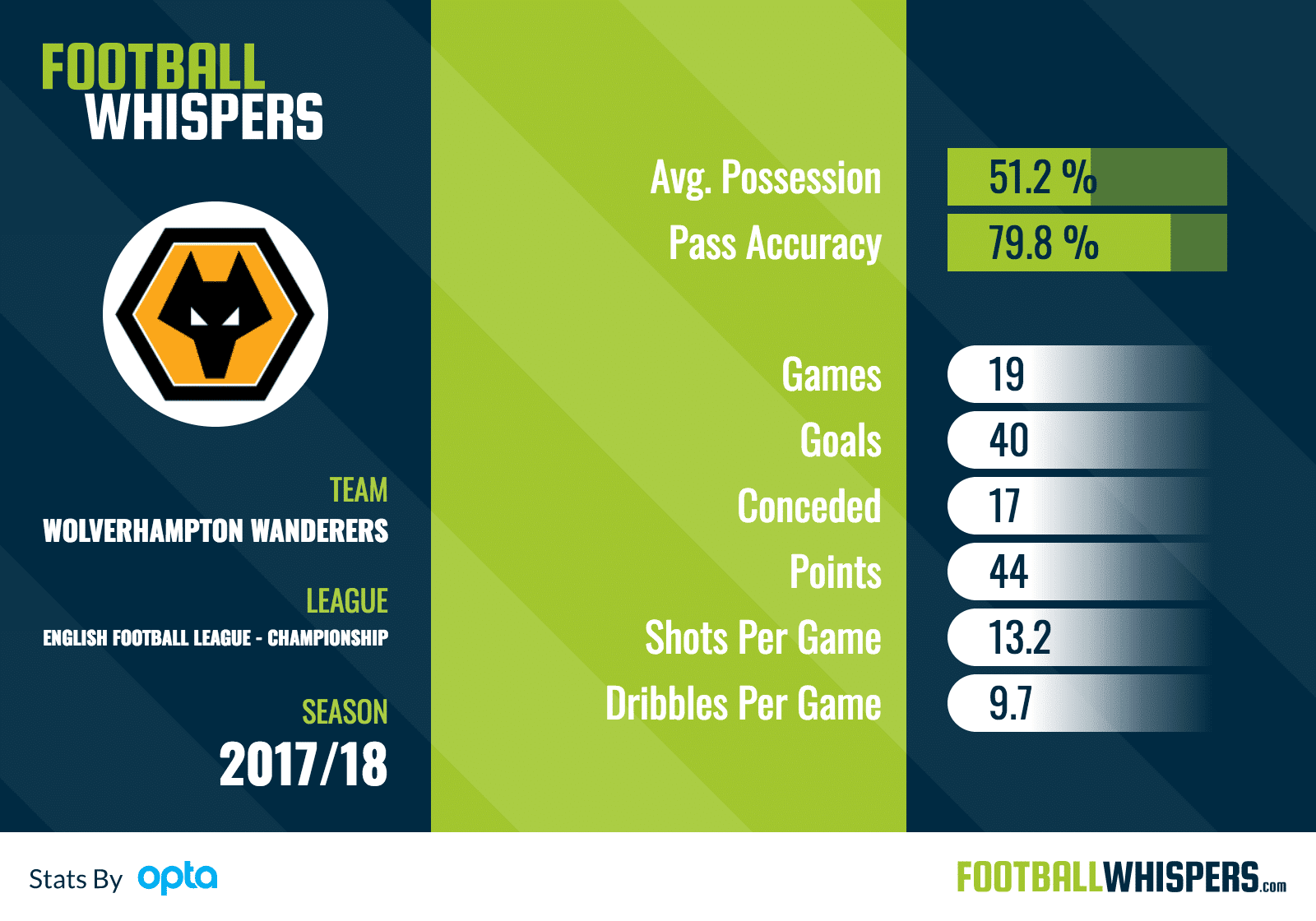 Are Wolves as good as those teams?

Of course, it’s still early days, but they’ve got qualities of all of them.

While Reading had a strong connection and players who knew each other well, it’s clear Wolves’ Portuguese connection will really help that, with not only a Portuguese manager but seven Portuguese players in the squad too.

What’s more, Willy Boly is on loan from Porto, and Léo Bonatini is also a Portuguese speaker, being Brazilian.

They also have great quality and strength in depth, there aren’t too many teams in the Premier League who can boast a midfielder as good as Rúben Neves, who is a Portugal international despite playing in the Championship.

The links to Jorge Mendes have undoubtedly helped bring this quality, and that has helped them brush aside most of the teams that have faced them this season.

It’s a long way to go, but with the level of player in Wolves’ squad, fans in the second flight could be seeing one of the best teams to play to ever play in the Championship.

They obviously have big aims at Wolves, and there’s no doubt that should this season carry on as it’s started, the goal will be to replicate Leicester and cause an upset at the top of the Premier League in the coming years.

In Molineux, they’ve undoubtedly got a Premier League stadium and with the financial backing from Fosun, there is real potential for the club to become a competitive top-flight side once again.