The French forward dumped José Mourinho's side out the Champions League last 16 in March last year by netting twice for Sevilla in four minutes at Old Trafford.

Ironically, the man who Ben Yedder could replace at Old Trafford this summer, Romelu Lukaku, pulled one back for United but it was not enough to give the Red Devils a stay of execution.

United have been credited with an interest in Ben Yedder previously and, according to reports, the Premier League giants are back in for the 28-year-old Frenchman this summer – if they can offload Lukaku to Internazionale first.

ABC Sevilla claim United will trigger Ben Yedder's £35.9million release clause which, even a month before his 29th birthday, would represent a bargain for a player who has netted 38 LaLiga goals in 69 starts for the Andalusian side.

So who is Ben Yedder and what would he bring to Old Trafford? We've profiled the Manchester United transfer target.

Who is Wissam Ben Yedder? 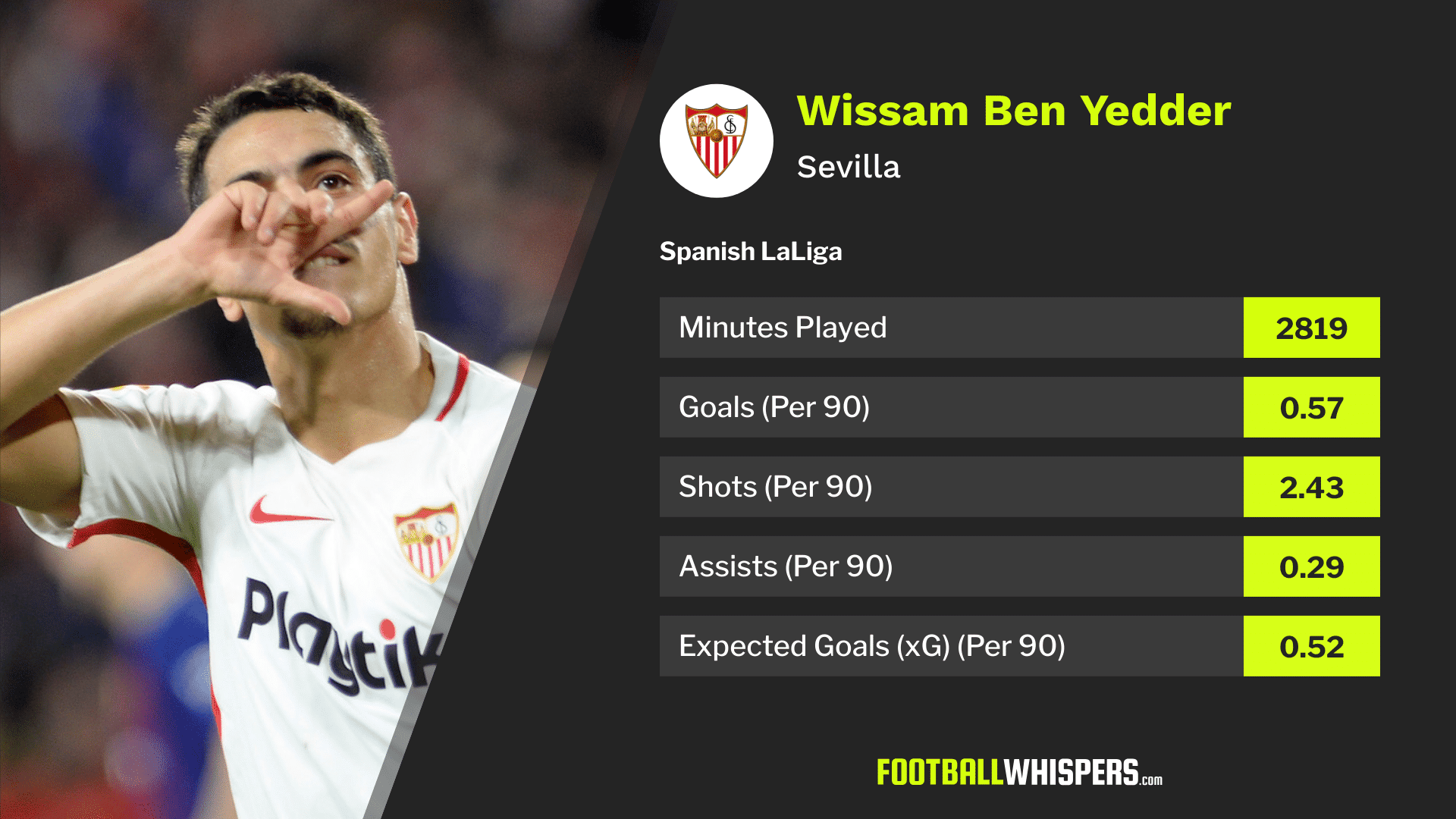 It was not until earlier this month that Ben Yedder made his first start for France, scoring in a 4-0 Euro 2020 qualifier against Andorra.

Except he actually represented his country for the first time in 2010 while playing futsal. The Sarcelles native has enjoyed a somewhat different career to the top and his background in the small-sided version of the game is credited to his upbringing in the technique-heavy version of the game.

“The first goal against Manchester United was typical of futsal,” Tony Esteves, coach of Ben Yedder's first futsal team, Garges Djibson, told Bleacher Report. “One touch to control, then a touch in the direction of the goal and a shot. In small spaces, he still uses the touch of a futsal player.”

In total, Ben Yedder won six caps for France's futsal team. At the same time, though, he had been turning out for 11-a-side outfit US Saint-Denis, based in the north of Paris.

He moved to fourth-tier side UJA Alfortville in 2008 and, after two years in the Championnat de France Amateur, he got his break when he joined Toulouse in 2010.

It took Ben Yedder two years to net his first professional goal for Le Téfécé but, after serving his apprenticeship in the second string, he became an integral figure at the Stadium de Toulouse, netting 15, 16, 14 and 17 Ligue 1 goals between 2012 and 2016. That convinced Sevilla, who took him to Spain in a €9million deal.

The 5ft 7in forward has continued his rich goalscoring form in Andalusia, netting double figures in each of his three seasons at the club, culminating in his return of 30 from just 44 starts in all competitions in 2018/19.

At 28 Ben Yedder is not an investment for the long-term future; he is someone for now. Which is exactly what Manchester United need.

What makes Ben Yedder so good?

His aforementioned schooling in futsal has added a layer to Ben Yedder's game which gives him an advantage. Played in a tight space with a heavier ball, futsal places a greater emphasis on close control and foot speed than regular five-a-side – and that was evident on his big audition at Old Trafford last year.

Receiving a pass from Pablo Sarabia, Ben Yedder split United's central defensive pairing of Chris Smalling and Eric Bailly before nudging the ball out of his feet and firing beyond the reach of David de Gea.

Four minutes later, he finished United off. Joaquín Correa whipped a corner into the back post where the Frenchman shrugged off a feeble ‘challenge' from Ashley Young and nodded beyond De Gea.

Fortuitous? Yes. Sloppy? Yes. But indicative of a player with razor-sharp predatory instincts.

Among LaLiga forwards for 2018/19, Ben Yedder had the third-best expected goals total of 16.33 which, in hitting 22 goals, he comfortably beat. Looking at his shot data for last season it's easy to see why it was A) So high in the first place and B) A figure he smashed.

The bulk of Ben Yedder's shots were taken from central positions in the penalty area with only six efforts all season coming from outside the 18-yard box. Ironically, the furthest out of those actually came off – but only because Real Sociedad keeper Gerónimo Rulli came haring out the penalty area to meet him in a 5-2 thrashing.

His goals, denoted by stars, almost exclusively came from in and around the six-yard box and only two efforts came from much further than 12 yards out. That is underlined by the fact he enjoyed 6.99 touches in the opposition's penalty area per 90 last term – the third-most of any forward in Spain's top flight. 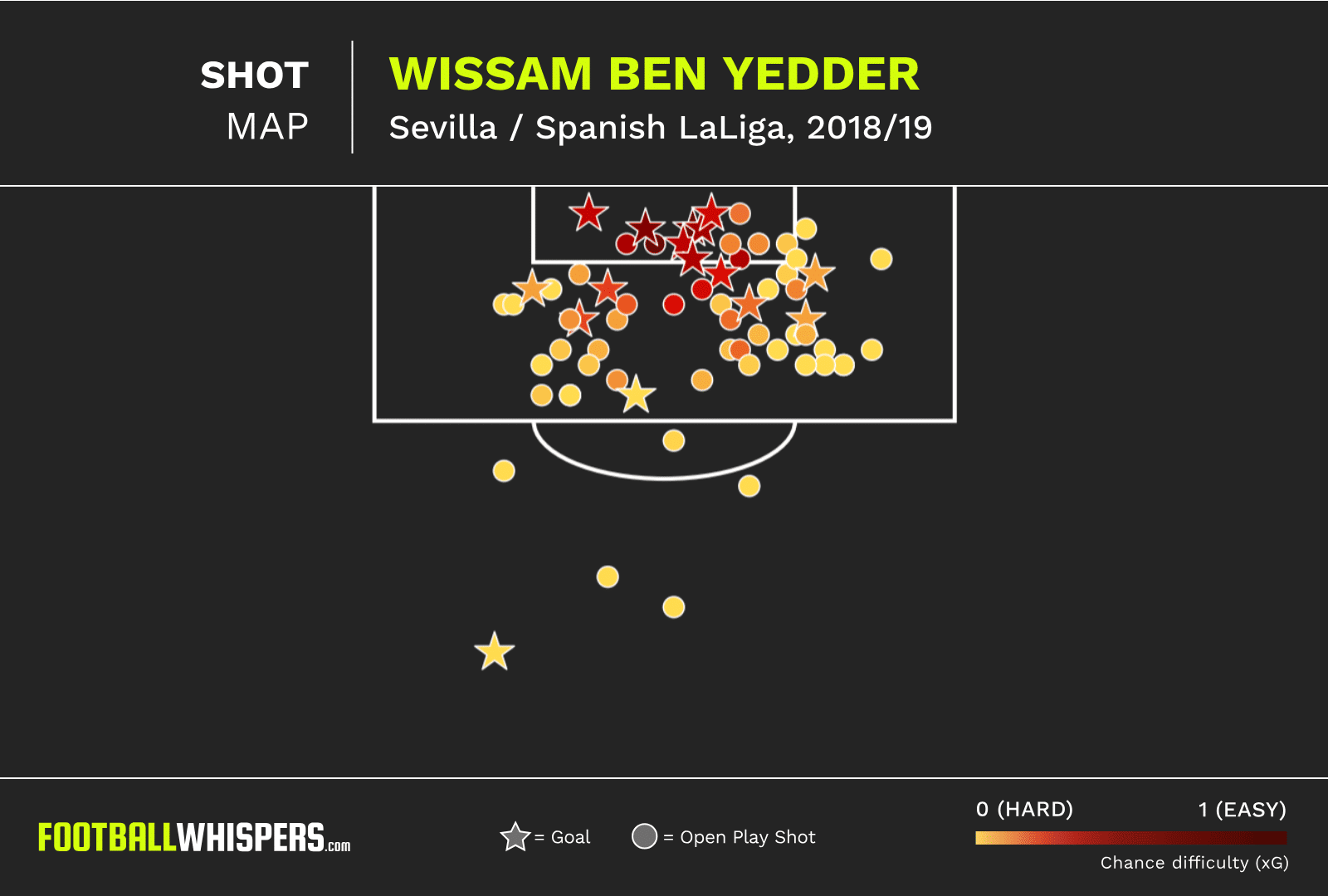 And if you're thinking Ben Yedder is exclusively a penalty-box poacher, think again. He supplied nine assists last term – all from open play – and bettered his expected assists total of 6.46.

How does Ben Yedder compare to Lukaku?

The big question, then, is whether United are better off bringing Ben Yedder to Old Trafford or sticking with Inter transfer target Lukaku. 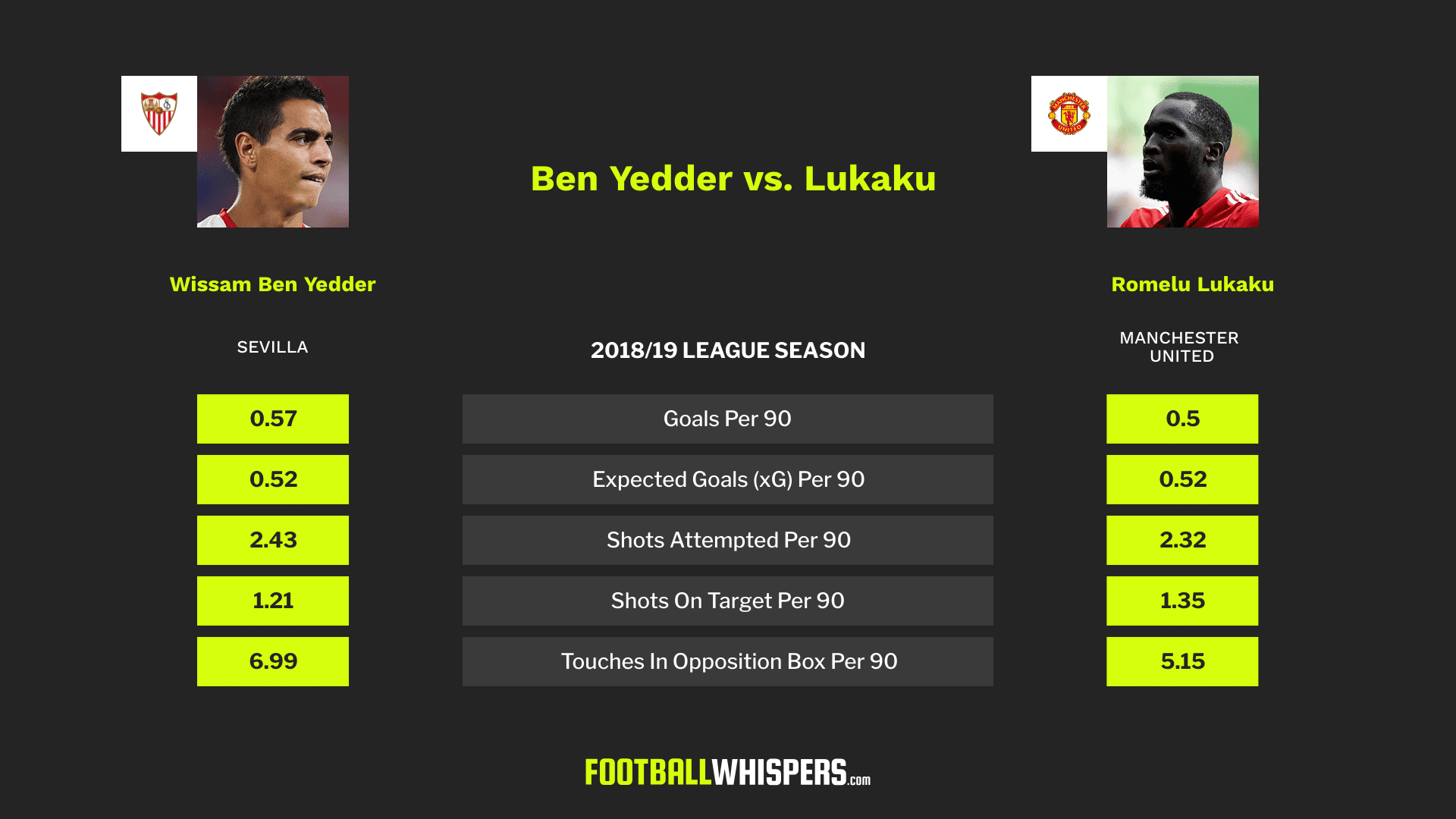 Unsurprisingly given the difference in their physique, the Belgian won more aerial duels last season (3.92 vs. 1.34). But otherwise, Ben Yedder has the upper hand in almost every metric against which strikers are usually held.

In summary, Lukaku might hit the target more often but Ben Yedder is more clinical. In a season where United's post-shot xG as a team was 72.37, yet they only managed 65 goals in the Premier League, Ben Yedder could be the much-needed upgrade on Lukaku they're looking for.