For most, Pep Guardiola’s first season in England was slightly underwhelming. His Manchester City side threatened at the start of the 2016/17 campaign before declining and failing to put forth a credible title challenge or a concerted Champions League run. However, eight games into the current league season, the coach’s ideas seem in place.

A 7-2 thrashing of Stoke City on Saturday afternoon offered confirmation that his team’s style of play is now established. A double from Gabriel Jesus, along with one goal each for David Silva, Raheem Sterling, Leroy Sané, Fernandinho and Bernardo Silva sealed the win, which never truly looked in doubt.

That result, on the back of a superb performance and 1-0 win away to reigning champions Chelsea, gave Manchester City a two-point lead atop the Premier League table. Averaging just over 3.6 goals per game and conceding 0.5, they look an increasingly difficult proposition for any opponent to stop.

Guardiola’s tactics, combined with some inspired summer signings, are at the heart of the improvement. After a year of bedding in and shipping out those unwilling or unable to adapt for younger, more malleable minds, he appears to have implemented what those in Spain and Germany – during his times at Barcelona and Bayern Munich – termed ‘Positional Play’.

Here, we analyse this style of play – how it works and why it’s so effective – as well as the key players that make Manchester City tick.

DIFFERENT WAYS OF BUILDING UP

There are few teams who can match Manchester City when it comes to constructing possession from the back. Guardiola may have recently lauded Tuesday night’s Champions League opponents Napoli as the best, but his own side are an exceptionally versatile and effective outfit in this particular aspect.

Against Stoke, he lined his side up in a rough 4-3-3 shape. Fernandinho played as the deep-lying central midfielder, often positioning himself between the two centre-backs, John Stones and Nicolás Otamendi. This was done to create a 3v2 situation up against the opposition’s front two, creating numerical superiority.

An example of the Brazilian’s awareness in this area is shown in the graphic below, where he analyses the situation and adjusts his position to offer a forward pass to his central defensive team-mate through the Stoke press. 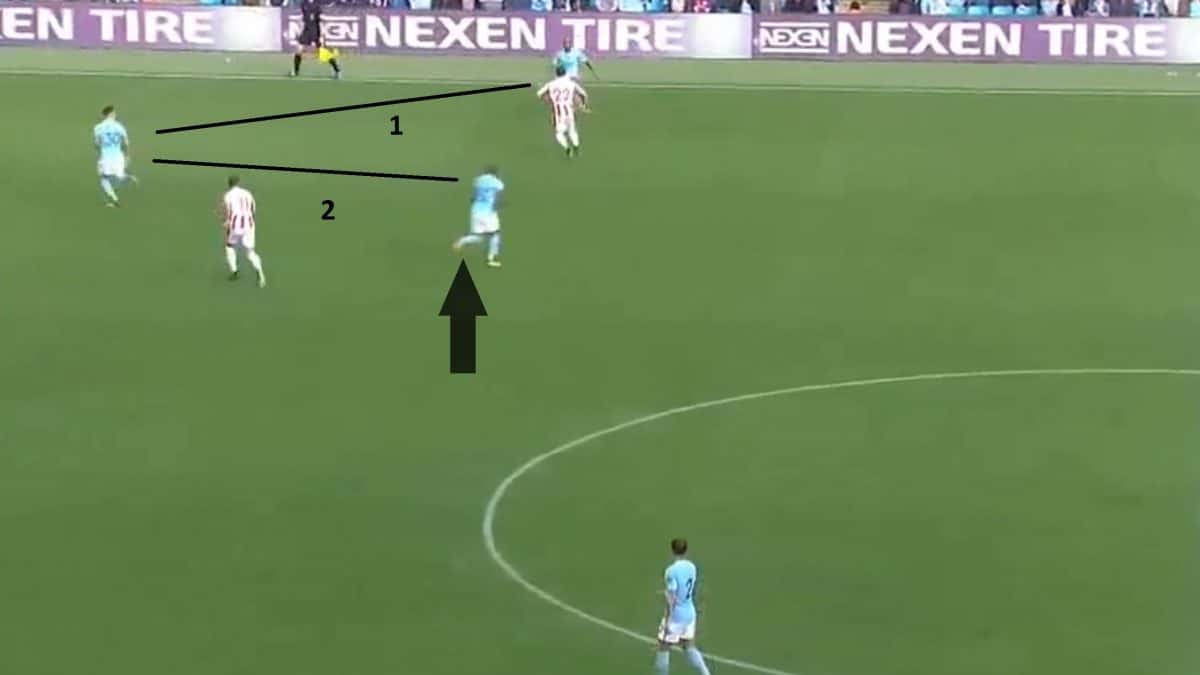 City are able to play through the first line of pressure in a number of different ways. The above is one way, though they have lined up differently against other opponents. In their opener against Brighton and Hove Albion, for example, they opted for a diamond back line in which Vincent Kompany and Otamendi flanked Stones, who took a slightly deeper position, and Fernandinho, who took a slightly higher position.

This created a diamond shape that, through generating numerical superiority and a number of different angles for passes, enabled them to play through or around the opposition’s two-man first line of pressure.

The injury to Kompany earlier this season forced Guardiola to rethink his setup. Against Chelsea, he decided to retain the diamond in build-up, opting to deploy Kyle Walker in the Belgian’s place. However, while the Englishman stayed deeper to help build possession, he was also instructed to push forward and drive at the opposition’s defensive block or push into more advanced areas.

While this was a special setup, there is often a good amount of fluidity within the Manchester City system. Against Stoke, Stones, Fernandinho and Otamendi at times alternated roles; this was done to maintain the structure – and therefore the effectiveness of the build-up – even when one player found himself temporarily out of position.

Their ability to penetrate the first line of pressure in multiple different ways is beneficial for two reasons. 1) If the opposition do press high, City are able to use their goalkeeper Ederson, along with the centre-backs and Fernandinho, to eliminate several opponents from the game immediately. 2) If the opposition decide against pressing high and sit deeper, City can establish possession higher up the pitch and control the game.

Numerical superiority is one of the ‘superiorities’ that Guardiola looks to generate within his side’s Positional Play. This, as explained above, is simply moving to create a numerical overload in a given situation, whether that be a 2v1, a 3v2 or a 4v3. However, there are other ways of gaining superiority.

One is ‘qualitative superiority’. This involves a 1v1 or 2v2 situation in which the attacking players are of greater quality to their opponents. While numerically there is no advantage, not all footballers are of the same level. For example, Kevin De Bruyne versus Geoff Cameron is, in isolation, not an equal match-up.

Manchester City looked to create situations of qualitative superiority such as the one above, as well as David Silva versus Darren Fletcher, against Stoke. They did this by having their full-backs – Walker and Fabian Delph – remain deep in the build-up.

Whereas in other games the full-backs have acted more as classic modern day wing-backs, Guardiola wanted them to stay deeper on Saturday so as to draw out the opposition’s wingers. Mark Hughes’ side played with a midfield four, so by drawing out the wide men a 2v2 of De Bruyne and Silva versus Cameron and Darren Fletcher was created.

Considering the ball control, movement, spatial awareness and passing ability of the City duo, this was not an even situation. Walker and Delph were integral to creating it, though they would also themselves be used to progress possession at times. If their central midfield team-mates kept a high position and dragged their markers with them, the full-backs would be tasked with receiving a sideways ball and driving forward themselves. An example of this is shown below. 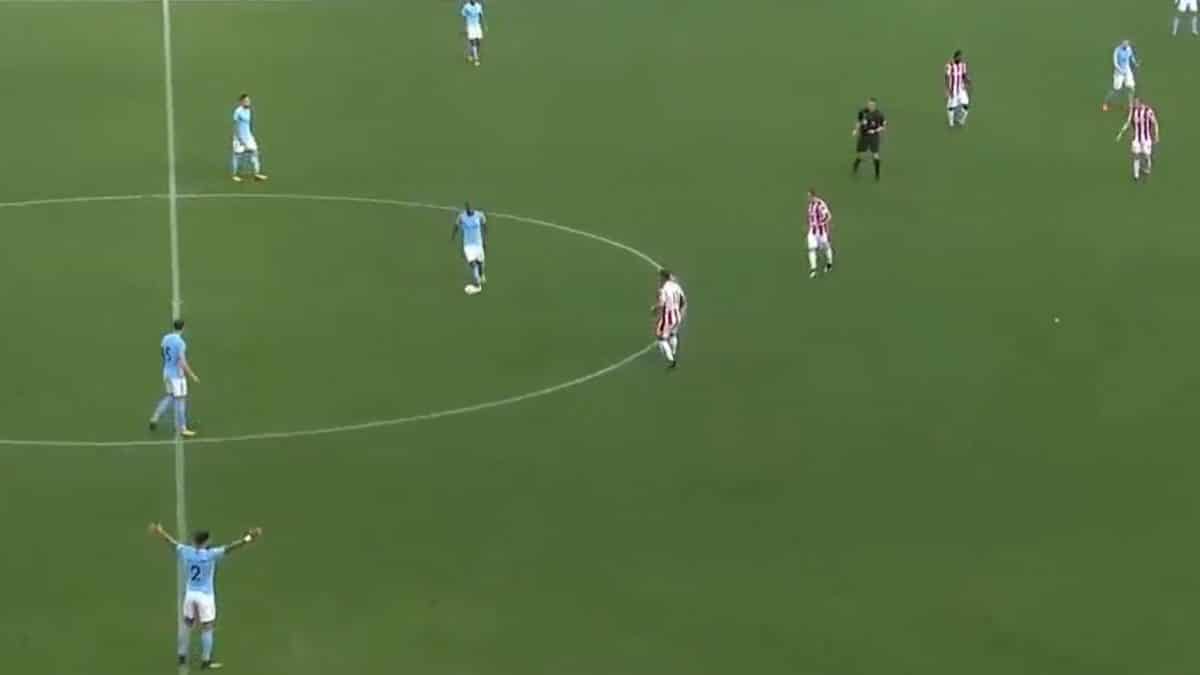 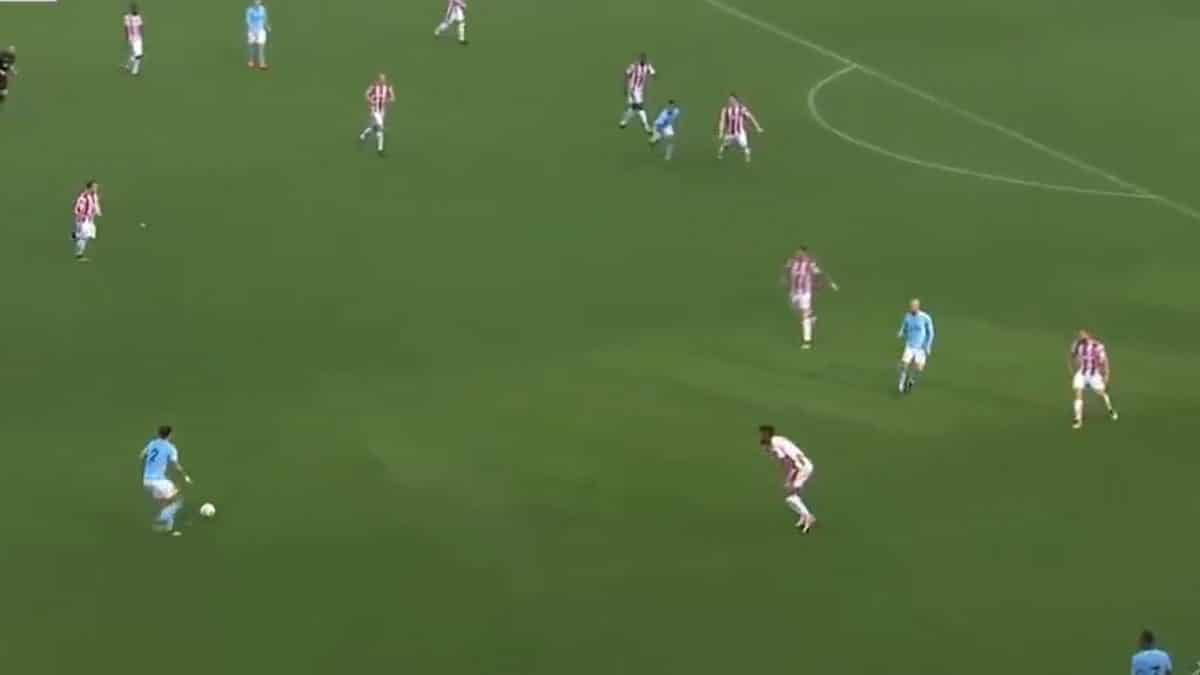 On top of numerical and qualitative superiority, Manchester City also look to generate ‘positional superiority’. This involves creating a free man between the lines of the opposition’s defensive structure. Again, Guardiola’s pursuit of this was in evidence against Stoke.

De Bruyne and Silva varied their positioning greatly throughout the match. When one dropped deep to receive the ball from the defence, the other would stay high and look to play behind the opposition’s midfield line. If Stoke’s midfield line decided to focus specifically on covering or pressing one of the two, the other would find space and time.

The wingers – Sterling and Sané – took up wide positions on the outside of the opposition back four. This was done primarily to create space inside for the two outer central midfielders to exploit. In other words, by staying high and wide, the wingers often looked to create a ‘free man’.

Sterling and Sané were both open for diagonal switches of play, thus helping their side resist pressure and creating dangerous 1v1 situations up against Stoke’s full-backs. Once those diagonal balls had been played, De Bruyne or Silva would immediately look to receive from the relevant winger.

This is seen in the stills below, where De Bruyne gets on the end of a Sterling flick-on following a long diagonal from Delph. With the opposition full-back having been distracted by the winger, the Belgian finds space inside to take advantage of. 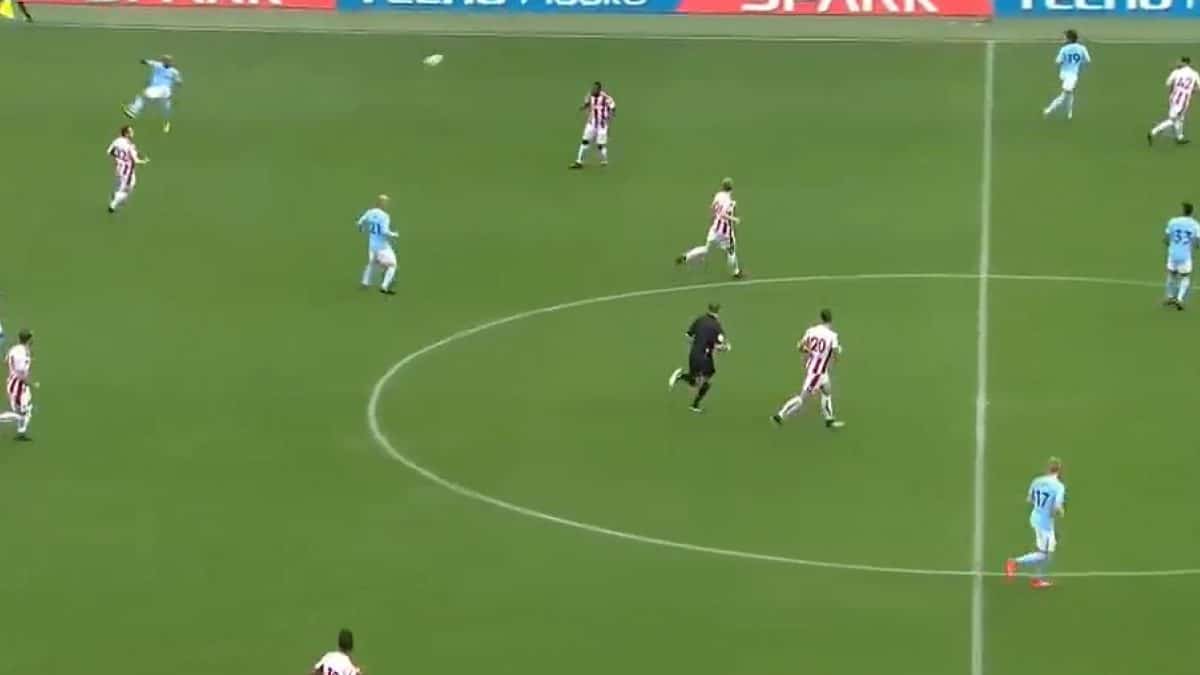 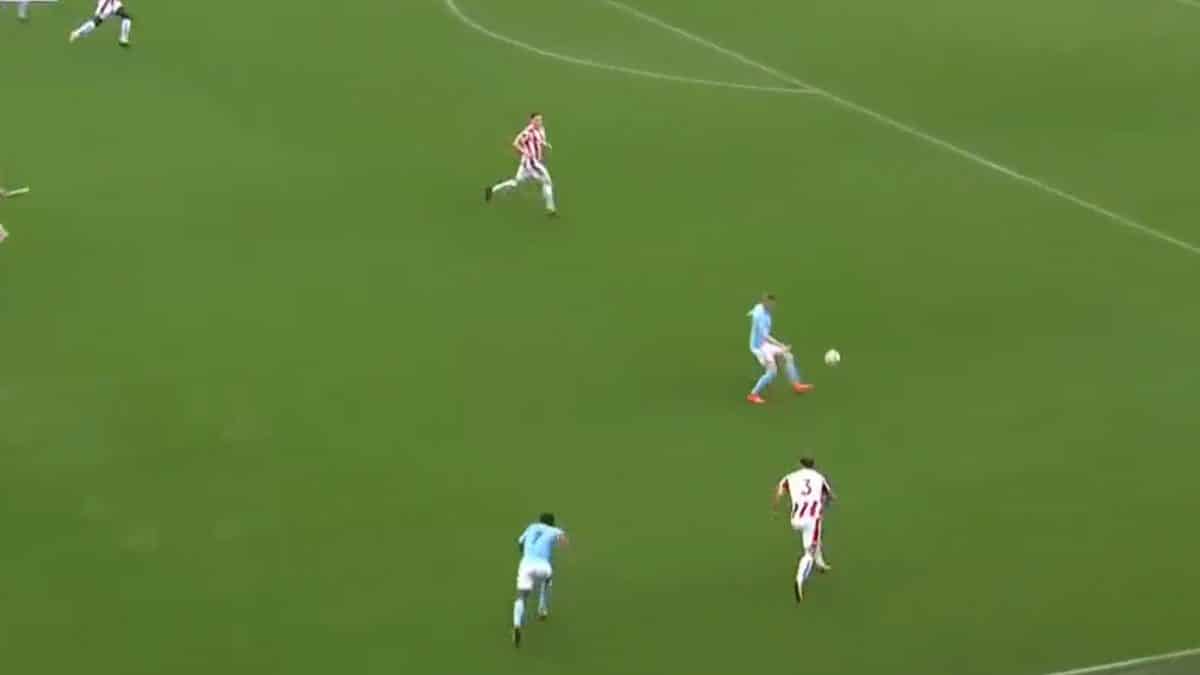 SCORING THROUGH DEFENCE AND ATTACK

Guardiola understands that, while the natural inclination is to separate out defence and attack, all situations within a game of football are connected. One phase leads to another, which leads to another, and so on. With this in mind, he – like many other top managers – prioritises a high press in which his side look to win the ball back in the opposition’s defensive third and create immediate scoring chances.

Manchester City were at their best in this respect against Chelsea. Sané and Sterling acted as the wingers in that game and were tasked with pressing the outer centre-backs in the opposition back three. They took up positions between the outer centre-backs and the wing-backs and closed in from the outside, preventing the short diagonal ball out wide. 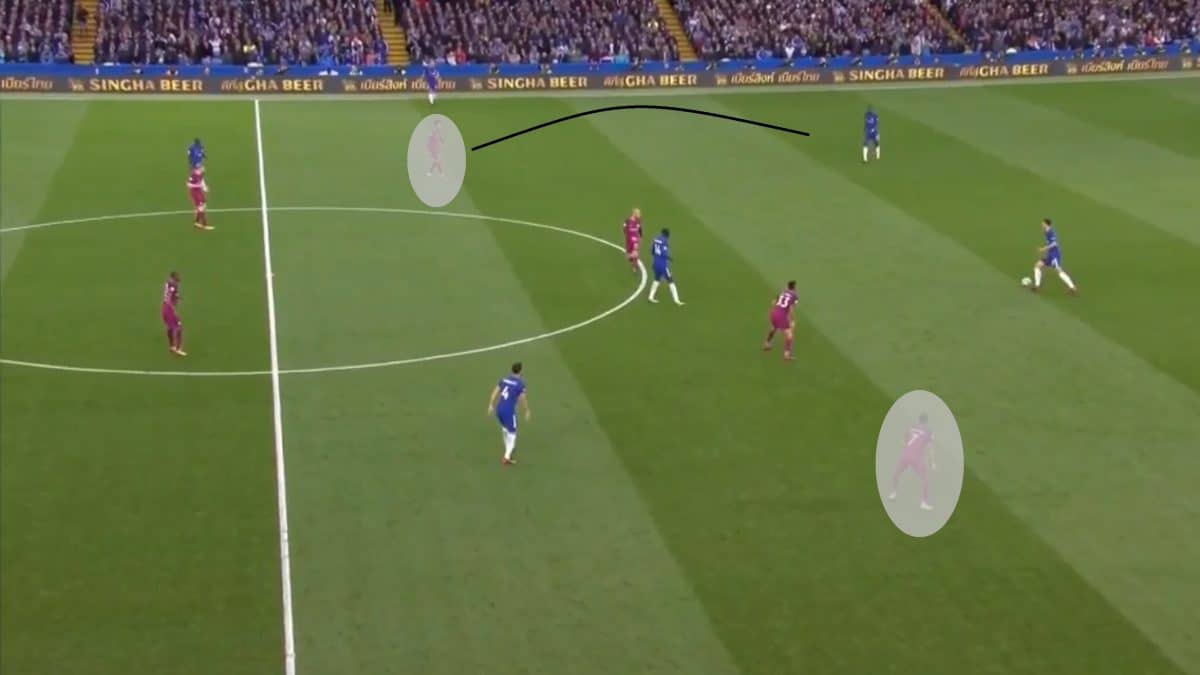 This approach, which is shown in the above graphic, caused a lot of problems for Antonio Conte’s side, who were only able to amount 38 per cent ball possession – which was well below their seasonal average of 51.4 per cent – as a result.

Such was the quality of Manchester City’s pressing against Chelsea, Stoke decided to completely remove this danger by consistently avoiding playing out from the back. Instead, either from goal kicks or open play, Hughes’ side would opt to go direct, pumping long balls into City’s half and essentially giving up possession voluntarily.

Not only are Guardiola’s side dangerous when defending high, but they are becoming increasingly effective in their attacking play in and around the final third. In early games, particularly in the 1-1 draw with Everton, they struggled up against a deep defensive block. However, they are now more mobile.

Vertical movements are key to City opening up their opposition. De Bruyne and Silva shift from deep to high positions in their respective roles, while Jesus, who led the line against Stoke, often drops off the front line to find space to use. 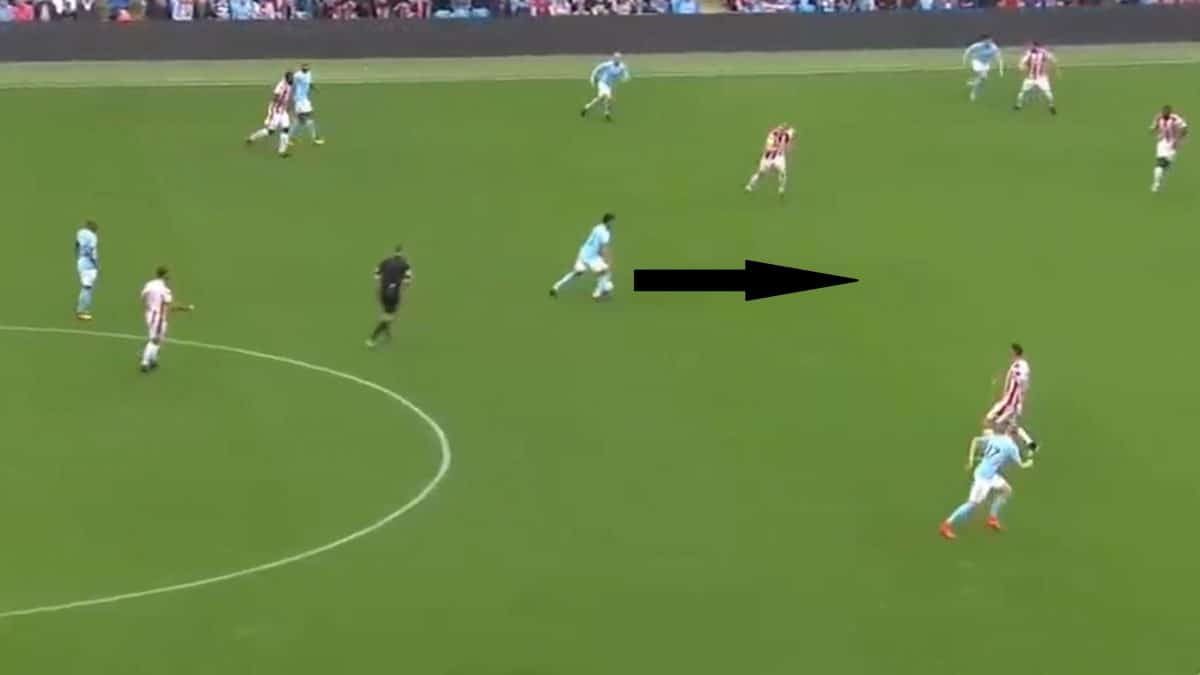 The striker’s movement is highlighted above, where he comes deep and – with his marker opting not to leave his defensive line – is completely unmarked. From there he can drive forward, draw out the opposition, and create space for a team-mate.

Jesus is also able to connect attacks through one-touch lay-offs. Initially, when he dropped deep against Stoke his marker followed him. Having created space behind, the Brazilian would then receive and instantly play sideways to De Bruyne, who would run onto the ball and look to take advantage of said space. 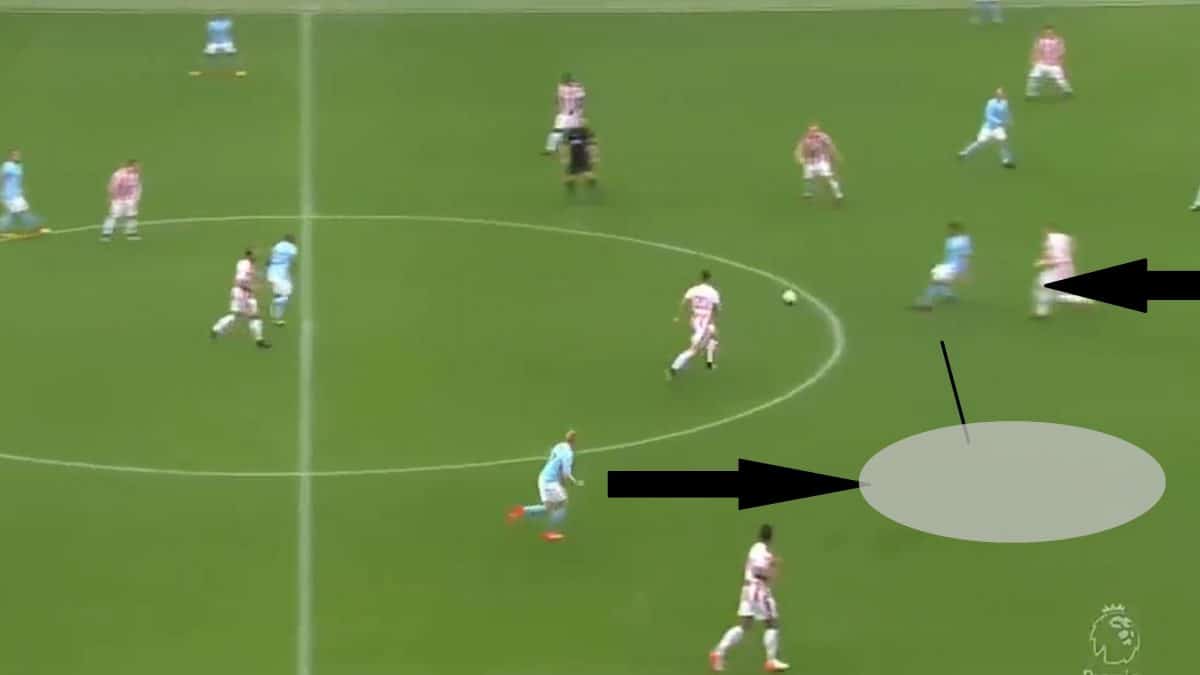 There were obvious signs of Manchester City settling to their manager’s ideas against Stoke that had nothing to do with passing patterns or off-the ball movements. There were nonchalant one-touch passes, brilliant pieces of control from aerial balls, long-range drives to the opposite flank. Generally, none of the players appeared flustered.

At the same time, there was one period of panic, albeit it was brief. Stoke managed to come back from 3-0 down 3-2. The tempo of City’s passing had gone down, their movement was not quite as sharp and their attacking intent had perhaps slightly declined.

In many ways, they are like a child with a new toy – they’re very aware of their newly mastered style of play and want to show if off; their tactics haven’t quite become subconsciously ingrained. Not yet, anyway.

However, it’s only a matter of time until Manchester City look precisely as many imagined they would when Guardiola took charge: Attacking, effective, entertaining and irresistible. Positional Play has its first Premier League advocate