Forget the fact that both Wimbledon and Rochdale sit low down the league table because some of their recent displays have been exceptional. Who though will come out on top when they meet? Find out with our Wimbledon vs Rochdale match preview with free tips, predictions and odds mentioned along the way.

Wimbledon to confirm safety with a draw

Let's get straight to it with this prediction of a draw; Wimbledon can secure their survival in League One with a point and that's exactly what we think they'll settle for as they host Rochdale. The Dons currently top the five game form table with 13 points from 15 whilst Rochdale have only lost one match in that time too. The reason we think it will be a draw though is largely based on the fact that it's what Wimbledon need meaning you can expect a conservative approach. With just three goals conceded in the last five, they'll make it tough for a Rochdale side that have only scored four in the same period.

A good enough game without loads of goals

With a tight game already predicted making the suggestion of the game ending south of 2.5 goals is hardly going to shock anyone. It's not a prediction that can be backed up by Wimbledon's recent games though; they've averaged 3.4 goals in their last five. Again, it comes back to the fact they know a draw is all they need; there is no incentive for going hung-ho when a loss could drag them back into the scrap. Of course, it's a two team game and Rochdale have seen three of their five end under 2.5 goals, which gives the tip more credence; as does the fact the match between these two earlier in the season saw just one goal.

Pigott to be the main man for Wimbledon

Just because a prediction of few goals has been made it doesn't mean there won't be any. If there is some, which we expect there will be, then it is very likely that Wimbledon's top scorer will be the man to notch. That, for anyone uncertain, is Joe Pigott. In his last five matches he has scored four goals and after missing a penalty on Saturday he'll been keen to get back amongst the goals as soon as possible.

Wimbledon vs Rochdale: Key information for the match

Wimbledon to stay up, Rochdale to fight on

It's not everyday that a relegation six pointer sees two of the leagues form sides go toe to toe but here we are. Wimbledon have been on a sensational run recently and a positive result keeps them up. For Rochdale, their run has been impressive too but it might be too little, too late. A win here though really would give them hope.

Wimbledon vs Rochdale: The final thoughts 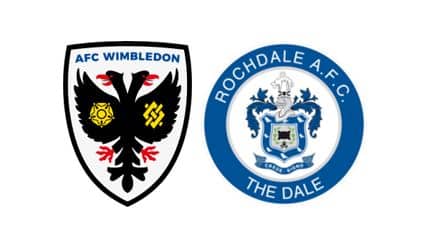