Wimbledon vs Portsmouth: Our betting picks

Wimbledon to be safe at last

Wimbledon are on a six match unbeaten run at the moment with their home form particularly impressive. They've taken 10 points from the last 12 available on their own patch. Portsmouth are currently in the last playoff spot, which means they need a result here. Pompey have only taken two points from their last four on the road though. Portsmouth will want to win but a point will guarantee Wimbledon's League One status and the form book suggests they may well get it.

Both sides to bag goals

Over the past five matches, Wimbledon are the second highest scorers in the league (joint with Hull behind Oxford) and they've netted 12 goals in their last four home matches conceding five. Portsmouth's last result was the same as their hosts; that's a 3-3 draw for those interested. It means they've shipped six goals in their last two away games scoring in both. Given one of those games was against now relegated Swindon, it hardly screams of a team who will keep a hot Wimbledon attack at bay whilst clean sheets isn't really the home sides strong suit either.

The previous prediction has already touched on the volume of goals both teams have seen of late so this tip shouldn't be a huge surprise. We can delve into more data to back it up though, which is always useful. Across the entire season both teams have an average that would make this bet a win; Portsmouth a bang on the 2.5 mark with Wimbledon slightly higher at 2.7. These figures move when you look at their respective home and away matches. In fact, both shoot up. Portsmouth to 2.7 and Wimbledon to 3.0.

Wimbledon scored a last gasp equaliser last time out to draw their relegation six pointer and, boy, was it important. They could lose both their last games and stay up but know another point will secure their safety, which is why this match is huge. Portsmouth need points too because they're looking behind them in the race for the top six. With both sides having something to play for at this late stage of the season it promises to be a good game.

Wimbledon vs Portsmouth: A final thought 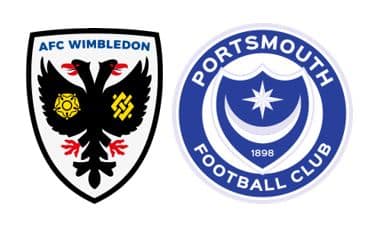