Wimbledon's biggest problem this season has been scoring goals so a visit of a side that have conceded just 33 goals to date hardly looks like the fixture for the floodgates to open. Eight of their last 10 matches have ended under the 2.5 goals mark. Where Fleetwood are concerned, their past 10 has seen only one match with three or more goals scored.

Fleetwood have lost their last two games but those defeats have come at home. Wimbledon are hardly in great form either; they've won just once in their last nine. When you look at the form in respect of the home and away split, things look even better for Fleetwood. Yes, the hosts are unbeaten in three but the sole win of that run came against relegation rival Northampton. Fleetwood meanwhile are on their own three game unbeaten run on the road. They've won two of those. They've won their last three matches at Plough Lane too.

Fleetwood to win to nil

We've stated our view that Fleetwood will run out winners whilst our first prediction is for goals to be lacking. Combine the two things and we think the away side could win without conceding. We've already touched on their solid defence but there is more to this tip than that. Wimbledon have failed to score in their last four defeats; Fleetwood's last three wins have also been to nil.

All the stats and odds for Wimbledon vs Fleetwood

A win would be huge for Wimbledon but it's unlikely

Both Fleetwood and Wimbledon suffered 1-0 defeats last time out; both will feel they could have had something out of the games as well despite facing teams sitting higher in the standings. In truth, Fleetwood won't care; their season is as good as done as they jostle for places in the middle of the pack. For Wimbledon, it might prove crucial. They've already beat Fleetwood once this season and now they'll be hoping to make home advantage count.

FAQ about Wimbledon vs Fleetwood 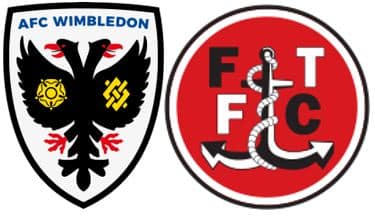