With the competition’s final slowly closing in, AFC Wimbledon will host Charlton in a last-ditch effort to escape relegation. If you are interested in betting on the fixture, look no further as you’ve found yourself in the right spot.

Our predictions are made by a team of experts using the latest available statistical data for the game in hand.

The odds provided are true at the time of writing but they are subject to constant change. Check your betslip carefully before placing your final bet. Our recommended bookmaker for this match is Ladbrokes.

You can be sure that the Addicks will have their eyes on the prize, which means getting the three points in this game. Unfortunately, Wimbledon who has won just 2 of its last 10 games, can’t quite match-up to the force that Charlton is. The last time that the two met in December of 2020, we saw Charlton put 5 past their opponent, but also conceding 2.

Meetings between these two squads result in quite a few goals. In fact, there has never been a goalless game between Wimbledon and Charlton. Furthermore, of their last 5 meetings, it was only once that one of the squads couldn’t get on the scoresheet.

Conor Washington to score at anytime

The experienced Championship and League One striker has recently been on fire. Washington has scored 4 goals in Charlton’s last three games. Up against a lower-ranked side as Wimbledon, the forward will have enough opportunities to add another goal to his tally.

See the head-to-head results below but also check out the compared odds.

Wimbledon vs Charlton: How have the two sides played lately?

Currently, the Addicks sit on the 6th spot in League One, and if they are to hold onto it, they will have a shot at promotion. However, this will be a difficult task, having in mind that 9 clubs are sitting 1-7 points above them, waiting for Charlton to slip. To secure a place in the play-offs, winning on the road to Wimbledon will be a great first step forward.

The Dons, on the other hand, find themselves in the relegation zone. Despite this grim position, they have a real chance of saving themselves. Wimbledon is currently just 2 points away from danger, which makes the game in hand of great importance for them as well. Although they surely are incentivized, Wimbledon has the worst goal difference in League One, which will most likely prevent them from getting points vs Charlton. 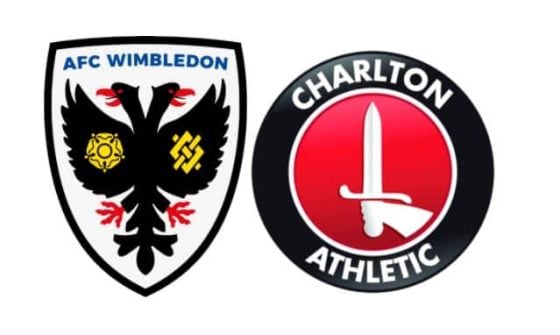