David Sullivan, David Gold and Karren Brady are frequently criticised, among many things, for an apparent lack of spending in the transfer market but the West Ham hierarchy could be poised to make a significant addition for absolutely nothing.

Jack Wilshere isn’t going to be playing for free but reports suggest the West Ham transfer target is increasingly likely to make the trip east on the Central line –something of a coup for the much-maligned Hammers board.

The soon-to-be-out-of-contract Wilshere, despite not making England’s 23-man squad for the World Cup, remains very much an international footballer and, at 26, is yet to experience his peak years as a professional.

He is also Arsenal’s best youth-team product for more than a decade and even though the Gunners may be voluntarily casting him aside, for West Ham, a club so used to losing their own talent, it makes for a refreshing change.

A long and chequered injury history, a mediocre loan stint at Bournemouth and several failed and indistinct comebacks at the Emirates Stadium is ultimately why it’s West Ham, and not Manchester City, who look most likely to become his new employer.

Arsène Wenger’s departure from north London gives Arsenal a chance to draw a line under Wilshere having been patient for so long and, although, emotionally allowing him to leave on a free will be of considerable regret, in football and business terms, it probably makes sense.

But how logical is it for West Ham to take a gamble on him?

His wage expectations are going to be around the £100,000-a-week bracket, making him among the club’s highest paid alongside Andy Carroll, and he has made just 34 Premier League starts in the last two seasons.

According to transfermarkt.com, since his star turn against Barcelona seven years ago he has sustained ten major injuries which have kept him out of action for at least a month. Although, he did remain largely injury-free throughout 2017/18, it was his form that was the problem.

But West Ham are not Arsenal and their priorities are different while the quality of his potential new team-mates is also not of the same level, however much you may worship at the Church of Mark Noble.

Manuel Pellegrini is also not Wenger and appears to have faith and confidence he can get the best out of Wilshere who can add energy and guile to a committed and perfectly competent Hammers midfield – albeit one that can be a little one-paced and lacking penetration.

Pellegrini is an advocate of 4-4-2; a system which requires at least one of its central midfielders, preferably both, to offer more than just hard work and defensive diligence.

Noble, Pedro Obiang are all perfectly good central midfielders, of slightly differing strengths, but they do all err on the side of caution.

Only three teams mustered fewer scoring attempts than West Ham’s 9.72 per game and the Hammers were one of only six teams to create less than one (0.94) big scoring chance a game while their xG of 1.08 was 13th in the Premier League.

Assessing the strength of their striker department is a completely different debate but whatever the failings of Hernández or Carroll, they were chronically starved of service throughout the campaign. 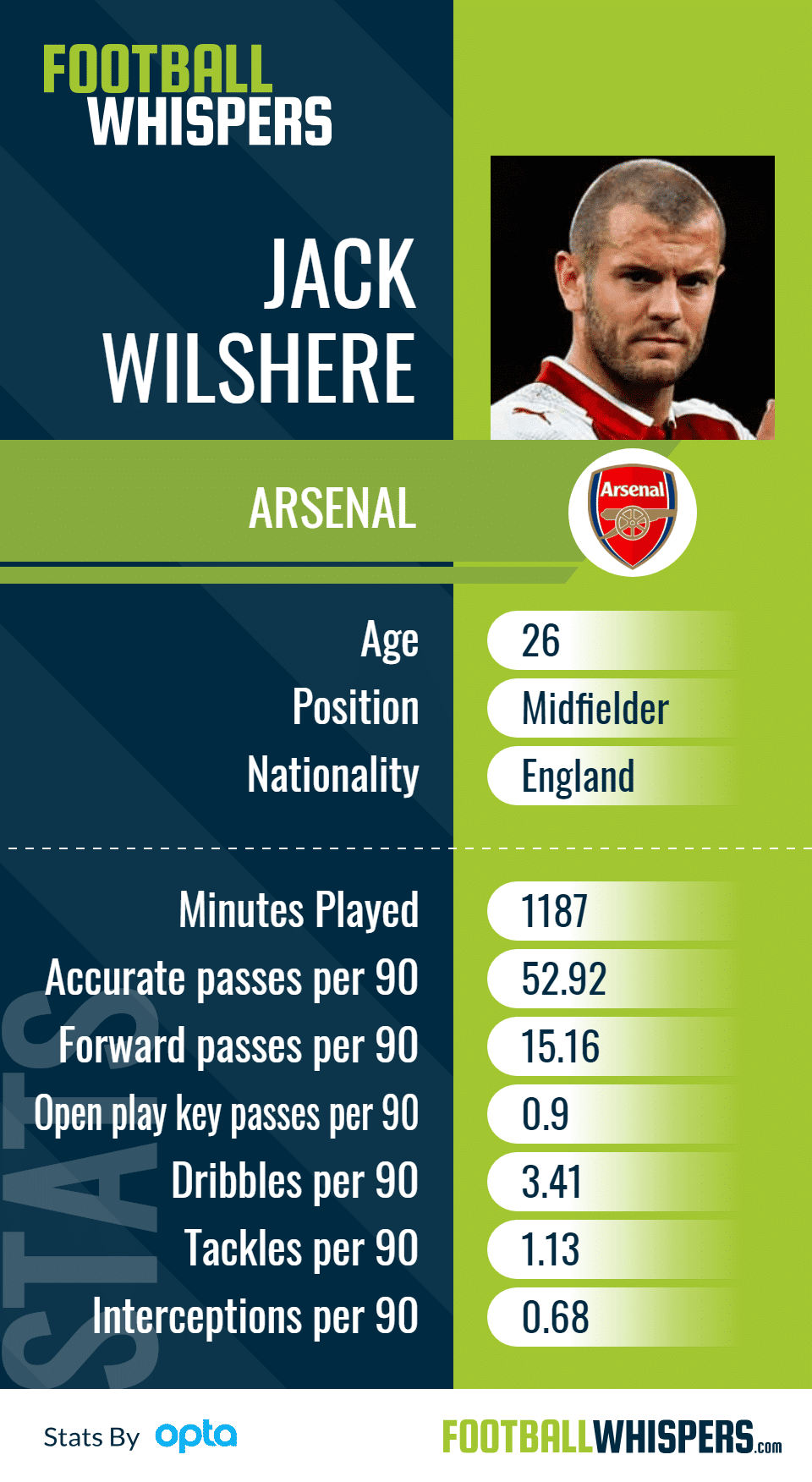 Wilshere, however, despite his limited action was still delivering 0.9 open play key passes per 90 (18th among Premier League midfielders), 0.22 assists per 90 (fifth overall) and 0.19 xA (seventh). Creatively, there is no competition.

The 26-year-old also retains the dribbling skills which marked him out as a promising teenage playmaker only for Wenger to go overboard in buying attacking midfielders, forcing him deeper and deeper.

There is a sizeable caveat in that Wilshere was playing under a manager who prioritised possession far more than Slaven Bilić and Moyes, so therefore had more opportunities on the ball, but such a stark difference goes beyond just the identity of the man on the touchline.

While Wilshere should provide more craft and drive in midfield, if Pellegrini succeeds in bringing him to east London, he’ll have to do his fair share of graft.

What happened at Arsenal should serve a wake-up call to Wilshere that he isn’t the footballer the Gunners wanted him to be and the greater football world thought he would be: an all-action box-to-box midfielder capable of running games on his own.

Under Pellegrini, in the less pressured confines of West Ham, he would have the opportunity to realise that vision. He can give the Hammers greater creativity and enliven a disenfranchised set of supporters, potentially helping elevate them into the Premier League’s top eight to ten.

For Sullivan, Gold and Brady that prospect would surely be priceless.