José Mourinho's assessment of his side's display after defeat to Brighton & Hove Albion at the AmEx Stadium in their penultimate away fixture of the 2017/18 season was scathing, and, without naming any names, the Portuguese manager appeared particularly disappointed with certain individuals.

The targets of Mourinho's ire were not difficult to decipher, with Marcus Rashford and Anthony Martial, fan favourites who have suffered reduced opportunities since the January arrival of Alexis Sánchez, the men in the firing line.

Now, according to The Independent, following reports of Chelsea‘s interest in Martial, Mourinho is willing to allow the Frenchman to move to Stamford Bridge, provided Brazilian attacker Willian is offered in part-exchange. 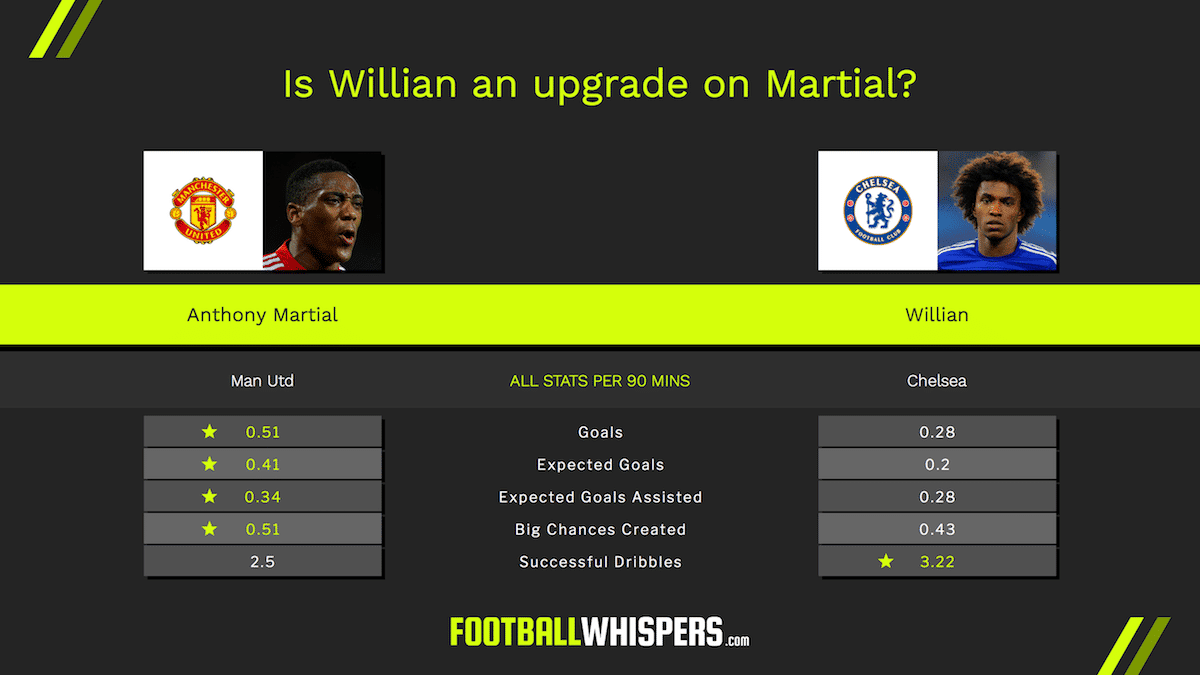 Mourinho knows Willian well from their time together in west London, and was believed to be interested in signing the former Shakhtar Donetsk player last summer.

Prizing his work ethic, versatility and perceived consistency, it seems the former Real Madrid and Inter Milan boss thinks he can get more of a tune out of Willian than he has from Martial to date.

Signed from Monaco for £36million – which has since risen to £44million, with his 25th goal for the club triggering an additional payment to the Ligue 1 side – as a relatively unknown teenager in the summer of 2016, Martial remains a popular figure with a large portion of United fans.

And despite the growing feeling that he has been somewhat of a disappointment at Old Trafford, Martial has been productive when given playing time, notching 17 goals in his maiden campaign with the club and bouncing back from a difficult second season to regain form this term, before losing his regular place to Sánchez.

As the above graphic shows, through intermittent game time this season Martial has remained one of United's most dangerous attacking players, bettering Willian in many key metrics.

What's more, having invested so heavily in one of Europe's brightest young talents, United – who have long since prided themselves of developing gifted prodigies into genuine stars – would be exchanging the 22-year-old Martial for a player who turns 30 in August.

Aside from his familiarity with Mourinho, there appears to be little upside in an deal that would take Willian to Old Trafford at Martial's expense.