Frank Lampard's Chelsea refresh spelt the end for one fuzzy-haired Brazilian veteran over the summer. But it wasn't – as expected – Willian who made way.

Instead, it was countryman David Luiz who exited Stamford Bridge. The new Blues boss told the 32-year-old he wasn't going to be a central part of his defensive plans for the upcoming season so he joined Arsenal.

After a couple of underwhelming campaigns, it had been anticipated Willian would be surplus to requirements too. Especially with Christian Pulisic arriving from Borussia Dortmund in a £58million deal and Callum Hudson-Odoi on the recovery trail following injury.

That view was only reinforced when Willian was left on the bench for four of Chelsea's first five competitive fixtures under Lampard. He missed the freak opening-day defeat at Manchester United with a hamstring injury.

It wasn't until September 14 and the 5-2 thrashing of Wolverhampton Wanderers that Willian finally completed 90 minutes in the Premier League. He hasn't looked back since, starting every league and Champions League fixture as Lampard's side show rapid improvement.

However, his form has reignited interest from abroad with Barcelona and Juventus reportedly keen on the 31-year-old who is out of contract next June. 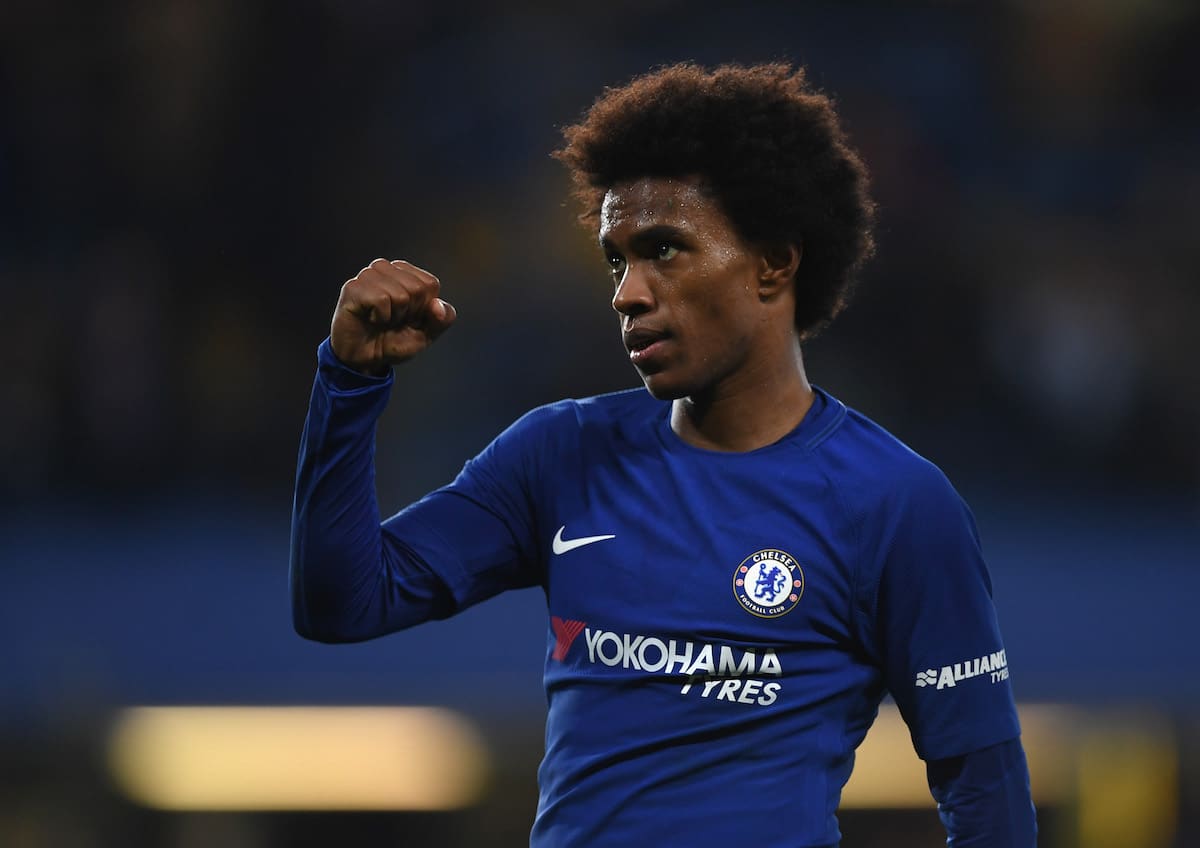 The Bianconeri, of course, love a free transfer. It's an unofficial policy of the Turin club to target players approaching free agent status, as they did with Arsenal star Aaron Ramsey around this time last year.

It's slightly trickier to make sense of Barça's interest. The Blaugrana are well stocked in attacking areas. In fact, they're already having difficulty trying to crowbar Lionel Messi, Luis Suárez, Antoine Griezmann and Ousmane Dembélé into the same side.

There's also the Philippe Coutinho conundrum to address next summer. Adding Willian to the mix would only further complicate matters for under-fire coach Ernesto Valverde.

Chelsea, then, should be making moves to keep the former Shakhtar Donetsk and Anzhi Makhachkala wideman. But it's not that simple. The Blues have a now-infamous policy of offering players over the age of 30 a single year's extension as a matter of principle. It was something they had to overlook to persuade Luiz to re-sign for two years, only for Lampard to ship the error-prone defender out shortly after.

That renewal was born out of desperation. Their two-window registration ban in effect, the Blues simply couldn't afford to lose a player of Luiz's experience without the capability to replace him. By the time Willian's deal elapses on June 30 they will be able to sign a ready-made replacement.

But with Pulisic gradually adapting to the demands of Lampard's system and the Premier League and Hudson-Odoi feeling his way back into things following injury, spending the kind of fee it would take to sign a suitable player might not be the best use of the cash burning a hole in Roman Abramovich's pocket.

In a young squad, Willian is one of the few players over 30 and one of the even fewer who shared a dressing room with Lampard the player. Chelsea's greatest ever goalscorer trusts the Brazilian. It's why he was captain for last weekend's 2-0 win over Crystal Palace. Flighty flair players might not be the traditional pick for the armband, but Willian has revelled in his role as a senior figure in the dressing room this season.

With regular skipper Cesár Azpilicueta on the bench, the Blues' starting XI had an average age of just 24 years and 88 days – making it the youngest in the club's history. Empowering Willian, then, was about more than recognising his form this season.

Lampard was duly rewarded with a man-of-the-match display which earned Willian a place in Garth Crooks' BBC Sport Team of the Weekend. 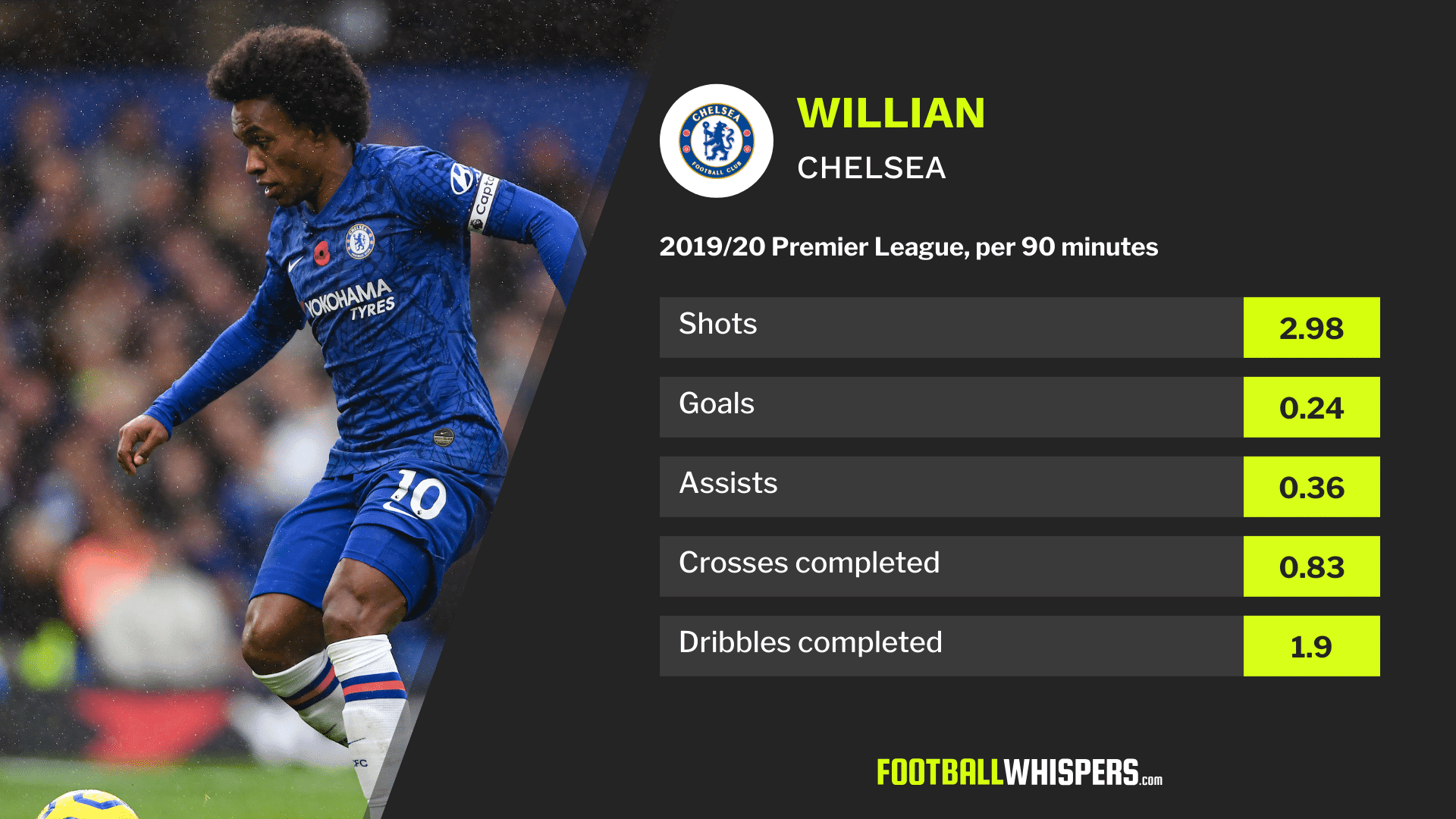 “What a clever move by Frank Lampard to make Willian captain,” former Tottenham Hotspur striker Crooks wrote. “The Brazilian is now an elder statesman at Stamford Bridge and the perfect candidate to bring the Chelsea youngsters through.

“He is also the best player in the team and can command the respect of some very talented but inexperienced young players.”

Willian played a captain's role, too, setting up Tammy Abraham‘s opener, and was at the centre of everything good about Chelsea. He created more chances (4) than anyone else and was only behind Mateo Kovačić for completed passes in the final third (22/23), as well as completing two of eight attempted crosses.

And, as he does, Willian worked hard out of possession too. He was third among Chelsea players for ball recoveries with six and won three of the four tackles he attempted – level with Kovačić and Kurt Zouma.
In the Premier League this season he ranks sixth for tackles attempted (2.38 per 90), fifth for tackles completed (1.54) and sixth for interceptions (0.95).
Lampard was understandably impressed with Willian's performance and has urged Chelsea to tie the Brazilian winger to a new contract as a matter of urgency.

“I can't get involved in the money, that's up to the club, but I think everyone sees I'm relying on him and I love him at this football club,” Lampard told Chelsea's media.

“When I looked at him at the start of the season, I saw him being huge for me and the way we want to play.

“The off-the-ball work he's done is an absolutely outstanding example for Callum Hudson-Odoi, Christian Pulisic and other young wingers who think the only part of the game is going past people and crossing or shooting.

“He does the other side brilliantly, with absolute humility, so he's been a joy and one of the experienced players that's really helping the young boys.”

The Brazilian's turnaround from Bridge boo-boy to elder statesman of the dressing room is yet another victory Lampard can chalk up from his first few months in the job. Now, for that new deal…