Willem II need points on the board if they are to stay up. PSV need them to clinch Champions League football for next season. At least one side will drop points this weekend but who will it be? Find out with our Willem II vs PSV match preview with free tips, predictions and odds mentioned along the way.

In so many ways the fortunes of these sides couldn't be any more different. PSV are unbeaten in four matches with 10 points from the 12 available whilst their hosts, Willem II, have lost three of their past five with just the solitary win over Waalwijk to help in their fight to stay in the top tier. With that considered and the fact that PSV still need points on the board we have no choice but to back PSV to win. Willem II have only beaten them twice in 10 attempts as well, which means they'll be fearing the worst from the first whistle.

Any Willem II fans reading this will already be feeling down in the dumps with our first prediction. It's about to get worse too because we can see PSV winning the match relatively untroubled. More specifically, we don't think Willem II will find the back of the net. The logic behind this tip is two fold. First and foremost, PSV have recorded three clean sheets in their last five games and they've won all three of those matches. Then you have the Willem II factor, which is that they've failed to score in three of their last five. The two things together – along with knowing PSV will have most of the ball – make us think it will be an easy day at the office.

Donyell Malen to grab a goal

Donyell Malen is a man that is rumoured to be in high demand with Catalan giants Barcelona the latest side linked with a move. Whether anything comes of those stories remains to be seen but you can understand the links; Malen has been red hot for a while now and this season has been no different. The ex-Arsenal man has 17 goals to his name this campaign including two in his last four. He's now gone two matches without a goal. Can you see it being three? We can't.

Willem II vs PSV: All your pre-game stats

PSV to tighten grip on second

Both Willem II and PSV are in serious need of three points. PSV have AZ breathing down their necks in the battle for the second Champions League spot whilst Willem II have a similar race unfolding with Emmen in the fight to survive. Both teams know their fate is in their own hands but they still have to deliver the goods and that is easier said than done. 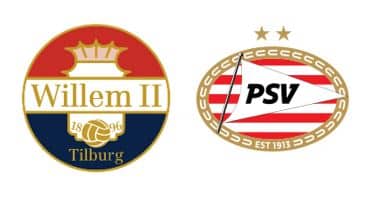