The two clubs couldn’t see eye-to-eye on the valuation of the Algerian winger in January. The Foxes reportedly wanted a package worth £95million, which the Manchester side baulked at, and now the rumoured deal has dropped to £75million.

While this is a pricey sum, City are a club who can afford it, and – it’s hard to stomach saying this – they could do with more strength in depth.

Partly due to success and a lack of injuries, but partly due to a drop-off in performances between their starting XI and bench players, Guardiola's starting line-up played a larger than usual share of minutes available.

Raheem Sterling and Leroy Sané, for example, played 76 and 71 per cent of City's Premier League campaign in 2017/18, as well as appearing in cup competitions. This isn't something that the team will want to be relying on next season.

According to Sean Kearns of The Metro, Guardiola appreciates Mahrez’s ability to beat a man in a one-on-one situation.

It’s certainly an integral part of the Algerian’s game, making up a large part of his persona radar.

This is not an area where Mahrez is likely to improve on the players that Manchester City already have.

In raw numbers, Sterling and Sané make a similar number of successful take-ons per 90 as Mahrez, although this may be a function of the City pair seeing more of the ball in matches.

However, having a similarly capable rotational option would mean that this dangerous dribbling is available to the Sky Blues in every possible minute of their season.

Barring minor differences, Mahrez’s stylistic radar is quite similar to Sané’s. The 27-year-old’s tendency for crossing will surely fall at City, and with an elite set of players around him his chance creation numbers are sure to rise.

It seems likely that it would be Sané that Mahrez primarily shares minutes with, should he join the club. Guardiola has used the 22-year-old German to give his side width on their left flank, an outlet for quick switches of play that stretch opposing defences.

This will be an interesting change from Mahrez’s role at Leicester where he starts as a right winger and cuts inside. From there, he can use his extraordinary left foot to create chances or take a shot at goal, where he’s particularly effective. 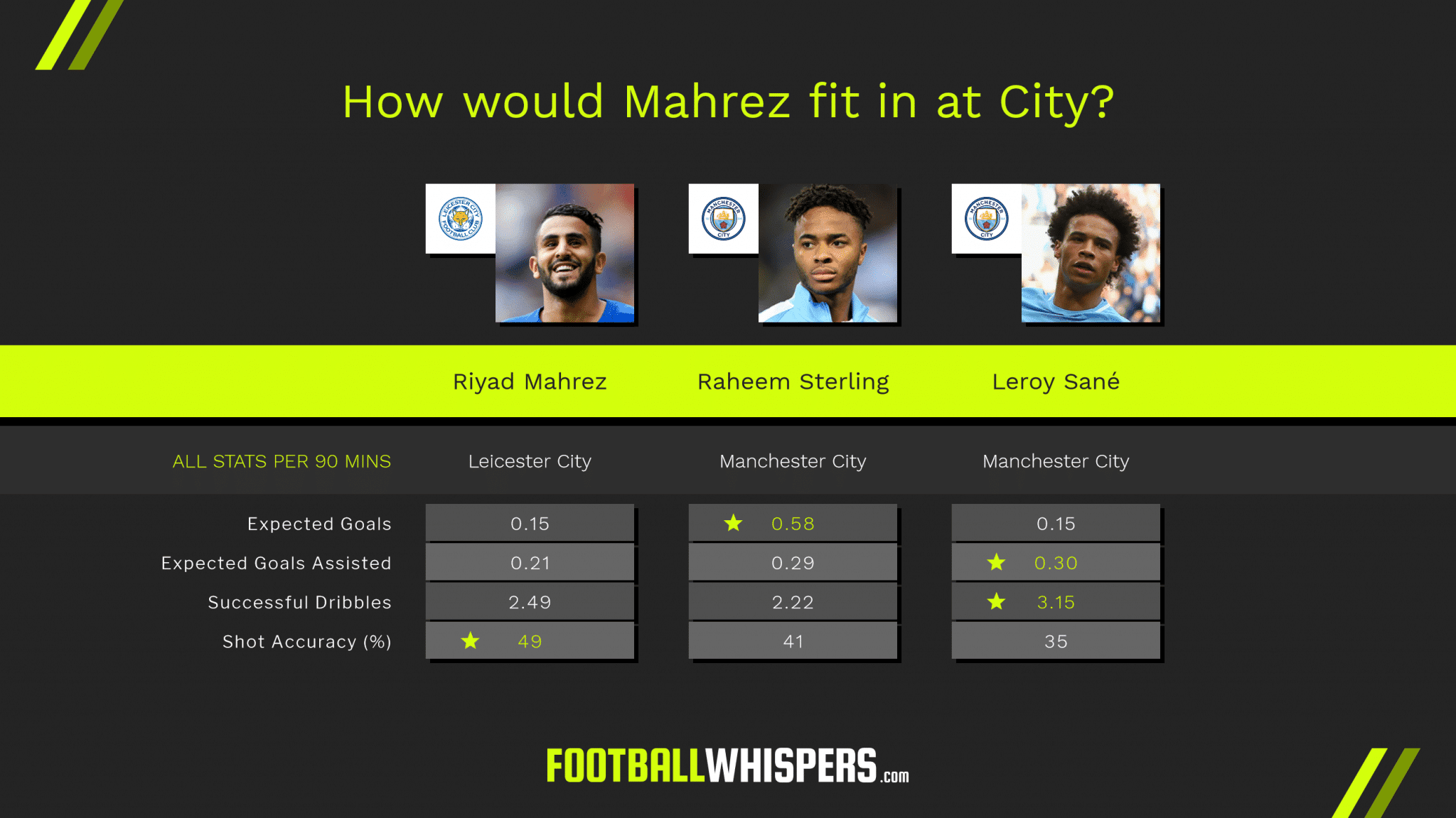 It might frustrate Mahrez not to be able to use this skill if he’s deployed wide on the left, but it could also come in handy if City are in need of something different.

Guardiola’s reported interest in his one-on-one ability stems from a fear that City will face more and more sides content to sit deep and frustrate the Premier League champions.

One way to help combat this would be to create good opportunities to shoot from distance. This could work by applying pressure to scare a defence into dropping deep so that when they see Mahrez receiving the ball 20-25 yards from goal they are slow to go and close him down.

It would be interesting to see, but given that City have been less than satisfied with two rotation options in the wide-left position – Nolito and Bernardo Silva – it seems likely that this is where Mahrez would be played.

Given the length of time that the interest has been ongoing and the sums of money involved, the City hierarchy must be sure that he’ll be a good fit there. At £75million, a third name on that list of disappointing rotation options would be an expensive one-season flash of mediocrity.