Marcus Rashford’s first World Cup is fast approaching and, with his record of scoring on his debuts, England’s first opponents Tunisia had better watch out.

“Marcus is a fantastic player and if he keeps going the way he is, he’ll set the world alight,” Ashley Young said in a recent press conference.

“He's going to the World Cup for the first time and this could be his stage to show everybody just how far he’s come since his debut.”

Rashford scored on that debut, against Australia, of course, as he did on his first showings for the England under-21s, for Manchester United, in the Europa League, Champions League, and League Cup.

He may have struggled in finding the net this year – with just four goals in 2018 – but the 20-year-old offers England much more than goals.

Despite struggling to find the net, Rashford took just over three shots per 90 in England’s qualification campaign. This is a good amount and suggests he’s probably unfortunate only to come away with a single goal, but it’s in other metrics where he really shines.

Out of players who will be in Russia, Rashford is one of the stat-leaders for open play shot assists, successful take-ons, and touches inside the opposition box.

These are all categories indicative of a more all-round forward and are impressive for someone so young.

Comparing these to the rest of the England’s World Cup squad makes for even more impressive viewing.

The only England player with more touches inside the opposition box (6.27) was Harry Kane, with 6.59 per 90. And no other regular in the Three Lions’ 23 made more than 1.5 open play shot assists per 90 during qualifying. Rashford made 4.54. That’s astonishing.

Granted, there is one exception. Jesse Lingard set up 3.34 shots per 90 during qualification but only played 215 minutes across seven appearances. That works out as just over half an hour per appearance and is a big flag that his stats might be subject to the ‘super-sub effect’.

Coming on late in games when players are tiring means that the fresh legged-player might get the ball more often than usual and that holes might open up more easily in the opposition.

Lingard’s stats are enough to catch the eye (he also contributed 2.93 shots per 90), but we should be wary of how much we can expect it to continue.

Rashford also potentially benefits from this. He played 416 minutes in nine appearances, averaging just over 46 minutes per appearance. That’s plenty of time, but it’s not quite the amount of time that a regular starter would be getting.

If Rashford is chosen as a regular starter in Russia, we probably shouldn’t expect quite such high numbers from him.

It’s interesting that these stats are so different from how Rashford plays for Manchester United. For the Red Devils he made just 0.74 open play shot assists per 90 while taking a virtually identical amount of shots (3.08 per 90) 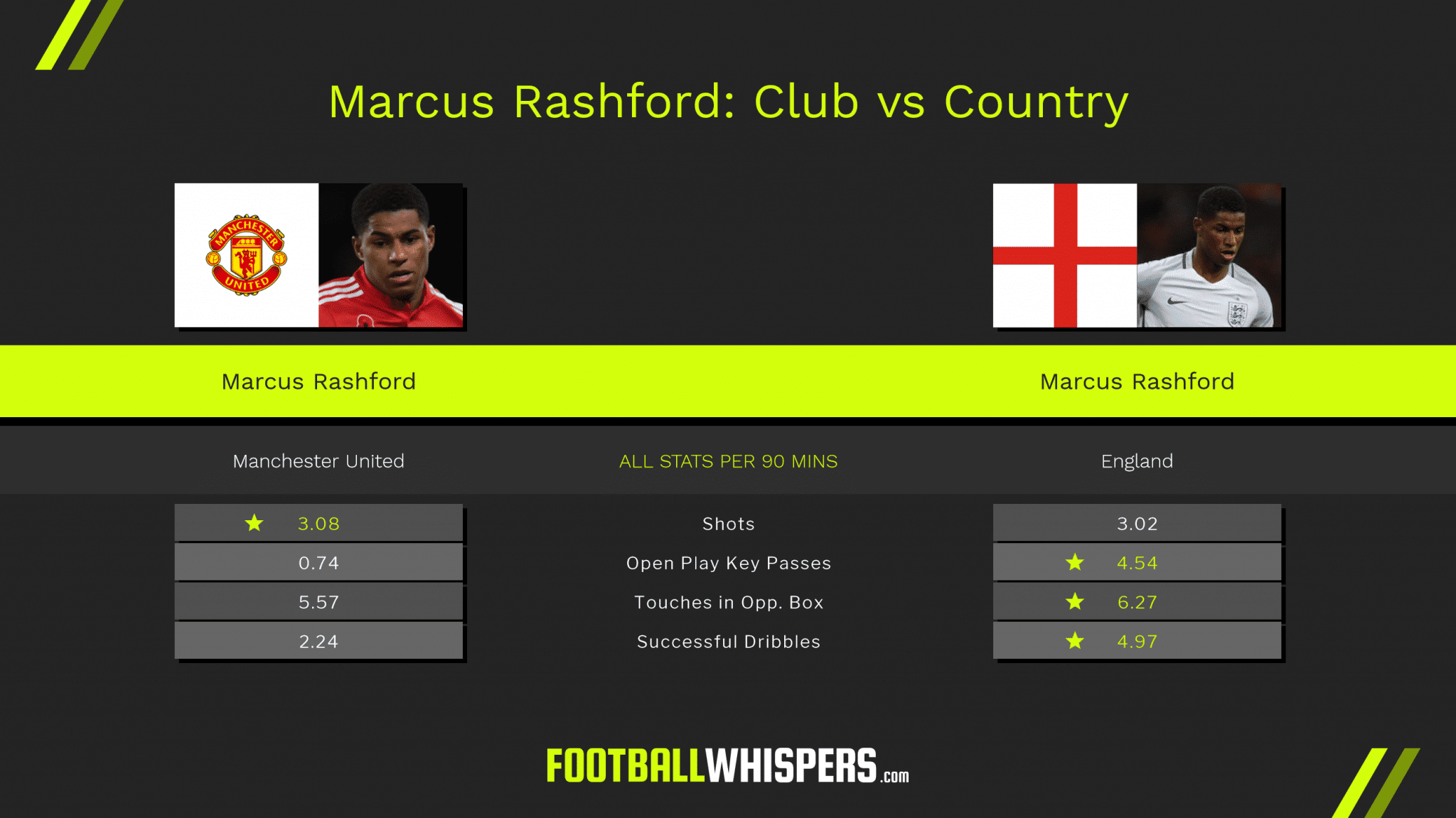 Part of this may be to do with linking up more easily with England team-mates, but it seems clear that the youngster is asked to perform a different, more creative role for the national team than for his club.

Rashford played deeper while in United’s academy, and last season said that playing there had given him an increased flexibility.

“I don't regret playing in the number 10 role because it means now I can still play there if I need to,” Rashford told Inside United in September 2016.

“Number 10, on both wings and up front as well. It means I have more in my armoury when it comes to the matches.” This certainly seems to be being utilised by Gareth Southgate and the England set-up.

“I used to look up to players who would dribble at people, creating chances, scoring too,” Rashford continued, “But the type of the player I want to be now is different to the type of player I wanted to be then.”

Whether Rashford still harbours some desire to be an all-round forward or not, it looks like a role he’ll be filling for England in Russia.