The 2016/17 Premier League season only ended 15 days ago but the former Barcelona and Bayern Munich coach has thrown himself into renovating a City side which finished third – 15 points behind champions Chelsea.

Monaco playmaker £35million for left-back Benjamin Mendy who is set to sign in the coming days.

Those acquisitions give Guardiola a headache, but a good one. City already boasted greater squad depth than most. However, Guardiola, understandably frustrated by the first trophyless season of his career, has wasted no time rectifying last season's problems.

With that in mind, we look at how Manchester City will line up next season given the wealth of talent available to Guardiola.

In goal is one of the few areas where Guardiola's decision seems clear cut. Claudio Bravo failed miserably to vindicate his coach's decision to move Joe Hart out on loan and, as a result, has been replaced by Portuguese stopper Ederson.

It seems implausible Guardiola would have lavished £34.5million on a goalkeeper to warm the bench which means former Barça stopper Bravo will either move on or find himself in a backup role.

Given Willy Caballero has already been released and Hart is surplus to requirements it seems almost certain Bravo will settle for a spot on the bench.

The area which needed the biggest revamp this summer was full-back. Long-serving Pablo Zabaleta confirmed his departure before the season was out and has signed with West Ham United.

Bacary Sagna failed to replicate his Gaël Clichy in being released.

That leaves Aleksandr Kolarov, who spent a portion of last term at centre-back, as the only senior left-back at the club. Mendy looks set to sign for City even after the club's initial bid was rejected. The 22-year-old French international should make the number three shirt his own.

Right-back is an entirely different proposition. Guardiola was unhappy with his options this season and tried Fernandinho and Jesús Navas – who has agreed a return to Sevilla – in the role towards the end of the campaign.

With no senior options there is a pressing vacancy which could be filled by Tottenham Hotspur's Kyle Walker.

The England cap is a Manchester City transfer target and has, reportedly, had a falling out with Mauricio Pochettino and could be available for around £40million.

The return to fitness of skipper Vincent Kompany in the run-in provided a welcome boost for Guardiola. The Belgian is City's best defender by a distance and should, fitness dependent, start next season as half of the first-choice central pairing.

However, it is far from clear who will start alongside the 31-year-old. John Stones and Nicolás Otamendi were partnered together prior to his return and it was the former who gave way towards the end of the campaign.

That is not a clear indication of the pecking order, though. The England man was a Guardiola signing, costing £47.5million, and, at 23, is the future of City's backline. He would benefit from playing alongside the experienced Kompany.

The conundrum for Guardiola is that he cannot compete on four fronts without four senior centre-backs. But he won't be able to guarantee all of them first-choice status.

Another player is needed but it will be hard sell which might open the door for Eliaquim Mangala following his loan spell at Valencia.

Like full-back, the centre of midfield is a position in Guardiola's system which requires a deep understanding of the coach's philosophy. It would not be a surprise, therefore, to see City return to the transfer market to pick up a pivote to dictate the play in the middle.

For now, though, Yaya Touré's one-year contract extension completed a remarkable turnaround in fortunes given he had been frozen out at the start of the season.

It seems unlikely the former Barcelona man, at 34, will be a regular starter for City next term with Guardiola preferring more mobile and harder working players in the engine room.

However, İlkay Gündoğan is coming back from a torn ACL suffered in December and will almost certainly miss the start of the season. That might mean an extended run in the side for Touré.

Fernandinho, an unsung hero, gives balance to City's midfield. Unless an upgrade can be found the Brazilian looks a certain starter in almost any system as he screens the back four and scurries around putting out fires.

Fabian Delph (two starts) and Fernando (five starts) featured sparingly and are more likely to leave than force their way into Guardiola's thinking. If one or both depart that will put greater urgency on the need for another central midfielder.

The addition of Bernardo Silva means City are over-stocked for attacking midfielders and that could force Guardiola into a change of system.

After recording more assists in a season (18) than any other player in Premier League history in 2016/17, Kevin de Bruyne's place is safe.

The Belgian played in numerous positions for Guardiola last season but mainly in the centre of midfield in a 4-1-4-1 or as a No.10 in a 4-2-3-1 system. 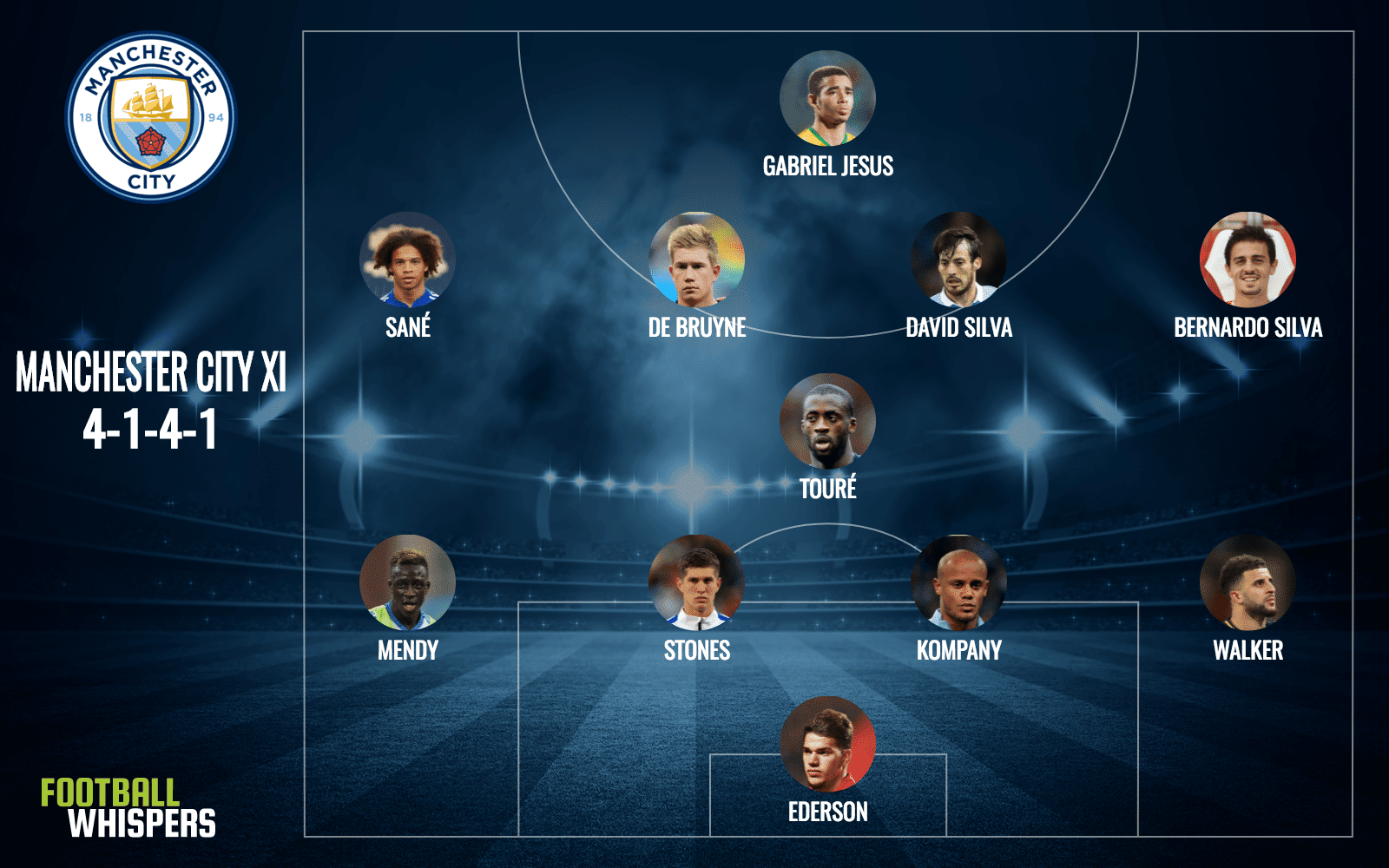 In a 4-1-4-1 Guardiola tended to start with Touré screening the back four and David Silva and de Bruyne in front of him.

That would still work – perhaps deploying Fernandinho as the deepest midfielder instead – with Bernardo Silva on the right flank and Leroy Sané on the left. 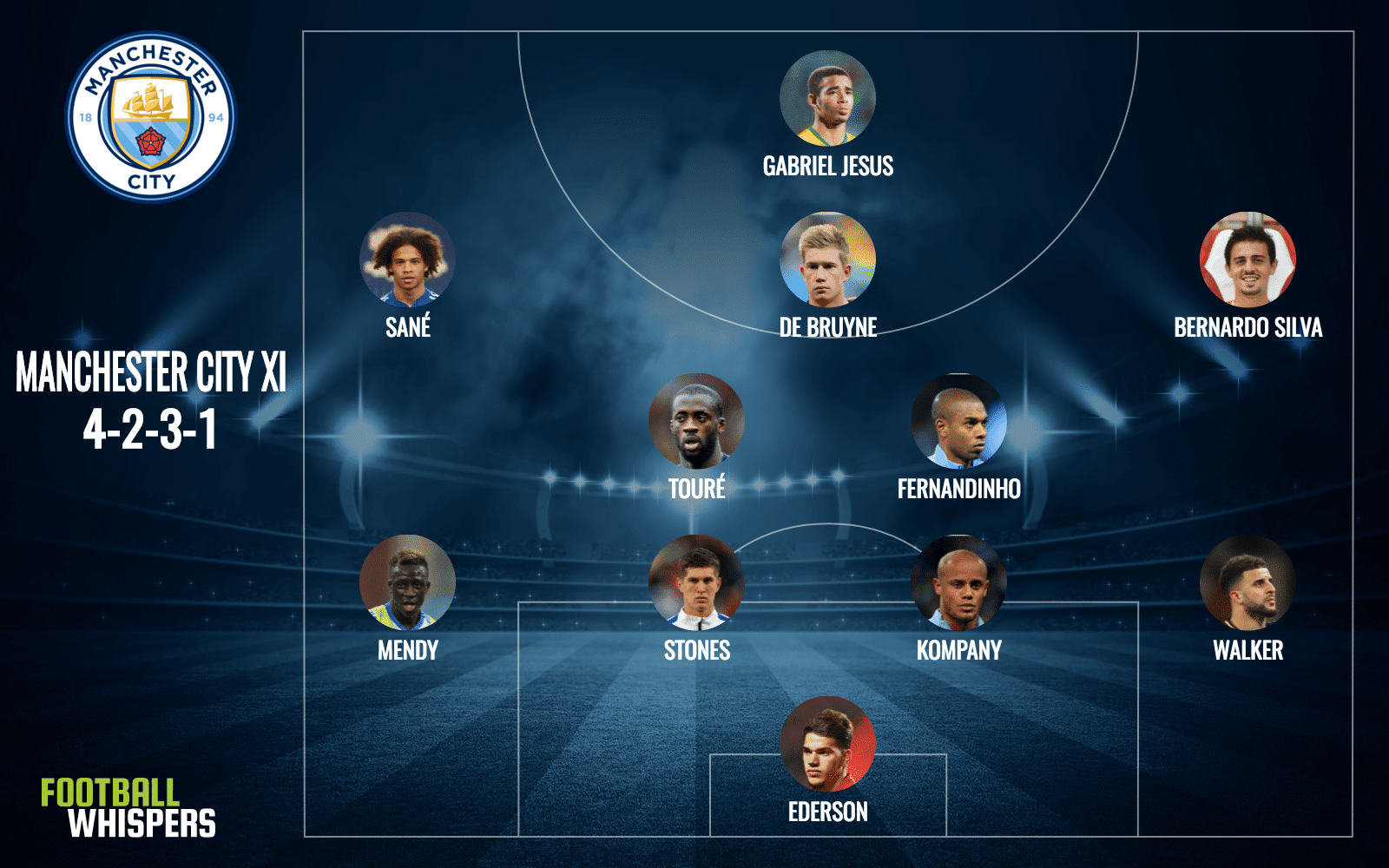 The same personnel would fit into a 4-2-3-1 with de Bruyne pushed up behind the striker, Sané and Bernardo Silva wide and Touré and Fernandinho in front of the back four.

That would mean Raheem Sterling missing out. The former Liverpool man started the season well and had scored five times by the end of September. But he ended the campaign having with just five more to that tally and providing only six assists all season.

Fleeting moments of brilliance have not led to consistent performances and the capture of Bernardo Silva will only put further scrutiny on his position as he struggles to justify his enormous price tag.

While Guardiola persists with 4-1-4-1 or 4-2-3-1 one of Agüero or Gabriel Jesus will be unhappy. The duo showed in the 5-0 final-day demolition of Watford how effective they can be together and pairing them more often would give City unrivalled firepower.

However, it would also affect the balance of side and would mean the midfield would have to be stiffened up. One option would be a 3-4-1-2 system with de Bruyne in the hole.

However, it is hard to imagine Guardiola putting David Silva in front of three centre halves in the majority of games.

The Spanish playmaker often goes under appreciated at the Etihad but still supplied seven assists – second only to de Bruyne – and won't be ready to accept a reduction in his role, even at 31. 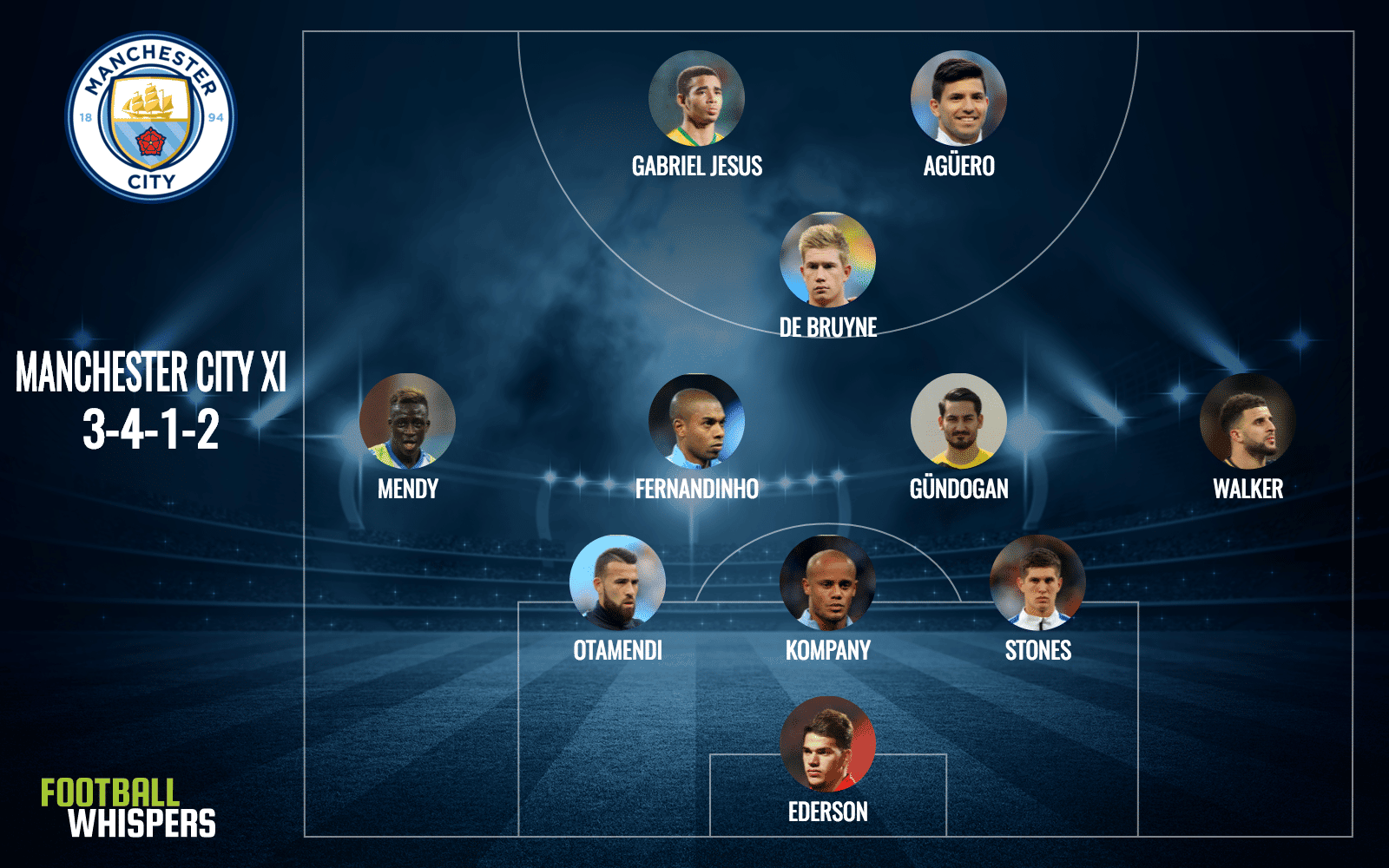 All of which leads back to one-striker systems. The best fit for City at this stage is 4-2-3-1. It splits the team into broad defensive and attacking units and ensures protection for the back four and goalkeeper, which will be comprised of at least three new signings (Ederson, Mendy and, potentially, Walker).

However, with the transfer window not yet open this could prove academic as Guardiola continues to re-shape Manchester City's squad in his own image.

It would not be too outlandish to suggest the arrival of up to three more players, after all.