Alex Oxlade-Chamberlain's move to Liverpool was mooted as far back as December. Reports emerged then to suggest Jürgen Klopp was a fan of the versatile midfielder and that the Reds were keeping a close eye on his contract situation, keen to make a move if there was a possibility.

Even after Arsenal accepted a bid from Chelsea with less than a week of the summer transfer window remaining there was a belief he would be plying his trade on Merseyside.

Oxlade-Chamberlain, a Liverpool fan growing up, put his trust in Klopp and rejected the Premier League champions.

It's since been reported that those at Stamford Bridge wanted him to carry on in a wing-back role whereas the 24-year-old wanted to return to a central midfield role and felt Liverpool offered him the best chance of doing that.

However, it's unlikely Klopp would have guaranteed Oxlade-Chamberlain a starting role as a centre-midfielder. He would have sold him on the idea of his flexible and interchangeable 4-3-3 system.

Players may start in wide areas but they'll inevitably end up in central zones throughout the 90 minutes. But the question still remains; where will Klopp look to utilise Oxlade-Chamberlain this season?

Where will Klopp use Oxlade-Chamberlain?

There's a lot to his game but as shown during the recent England matches it all still needs to be refined. Arsène Wenger, once renowned for nurturing talented youngsters, somewhat wasted Oxlade-Chamberlain's formative years as a player.

Despite his age he's still very much raw but all of the tools and strengths he has make him an ideal Klopp player. He's explosively quick, he's a ball carrier, he's diligent in his defensive work and he's not one to ever give up, even when the game isn't going his way.

There may be a few trial and error moments for the former Southampton man at Anfield. His stats from last season make him sound like an intriguing prospect at centre-midfield. 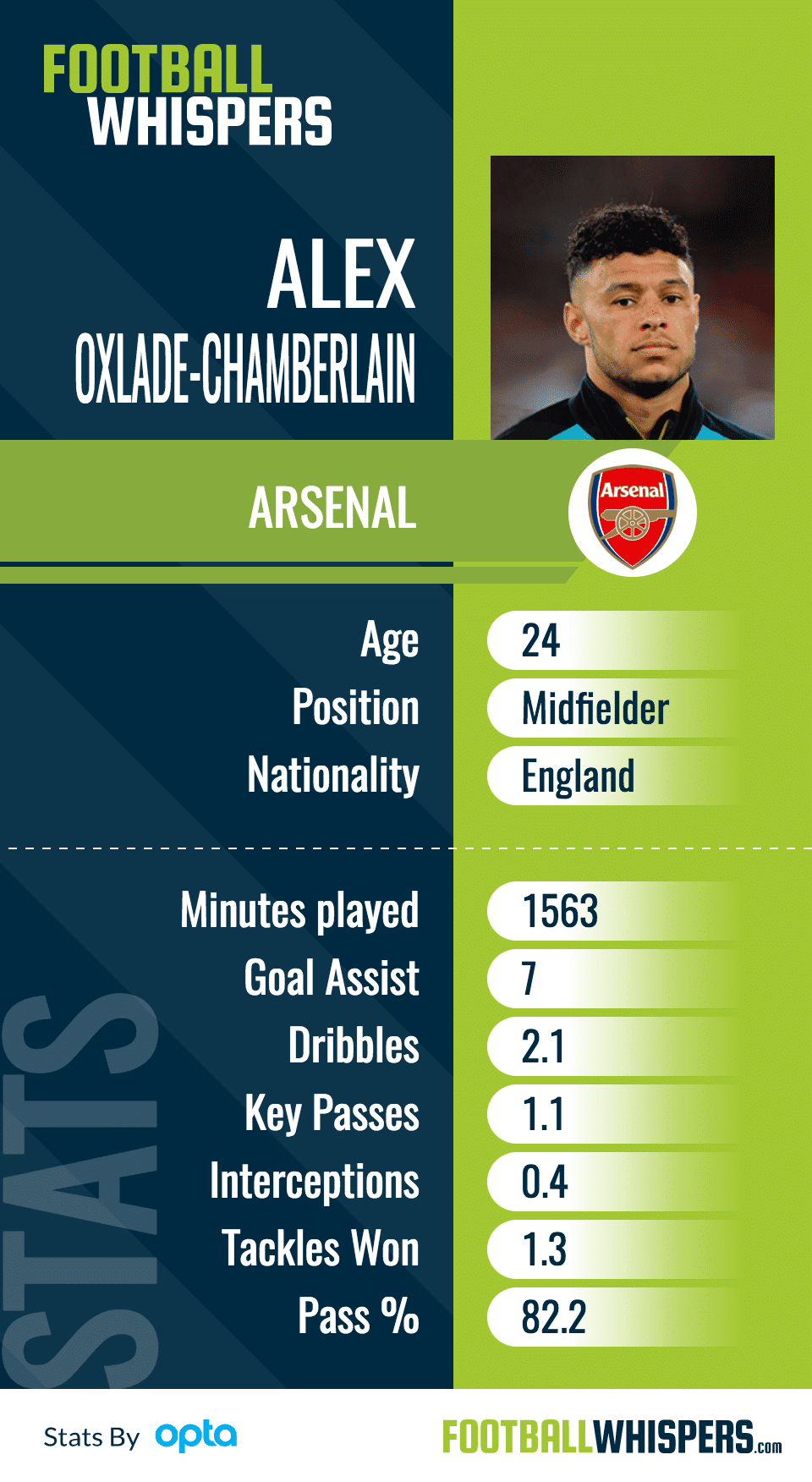 However, it may be naive to take those numbers at face value, at least until you've seen him play in the Liverpool system.

Take for example his dribbling stats. Only Barcelona transfer target Philippe Coutinho and Sadio Mané completed more than him, but playing as a wing-back it’s perhaps easier to isolate an opponent and beat them for pace – you’re running into more space than a normal wide player so speed is invaluable here.

Could he post similar numbers when operating in a centre-midfield role? It’s a lot more compact meaning there’s less space to exploit.

His assists, too, are something to look at. Of the seven goals he created last season four of them came from crosses into the penalty area. If he’s playing centrally he’s not going to find himself in the areas to put crosses into the area as regularly but that doesn't mean that part of his game will be cut off completely.

Last season the box-to-box midfielders often took up wide positions to allow the inside forwards to drift in field. There's no reason not to suggest this won't happen with Oxlade-Chamberlain playing on the right of a midfield three.

When Salah tucks in he could occupy the right side of midfield and the Reds wouldn't lack pace there.

It would also be a clever move to have him fill in at right-back when Trent Alexander-Arnold, Joe Gomez or Nathaniel Clyne are further upfield supporting the attack. It's something James Milner did for Andrew Robertson against Crystal Palace and Liverpool benefitted from it greatly. 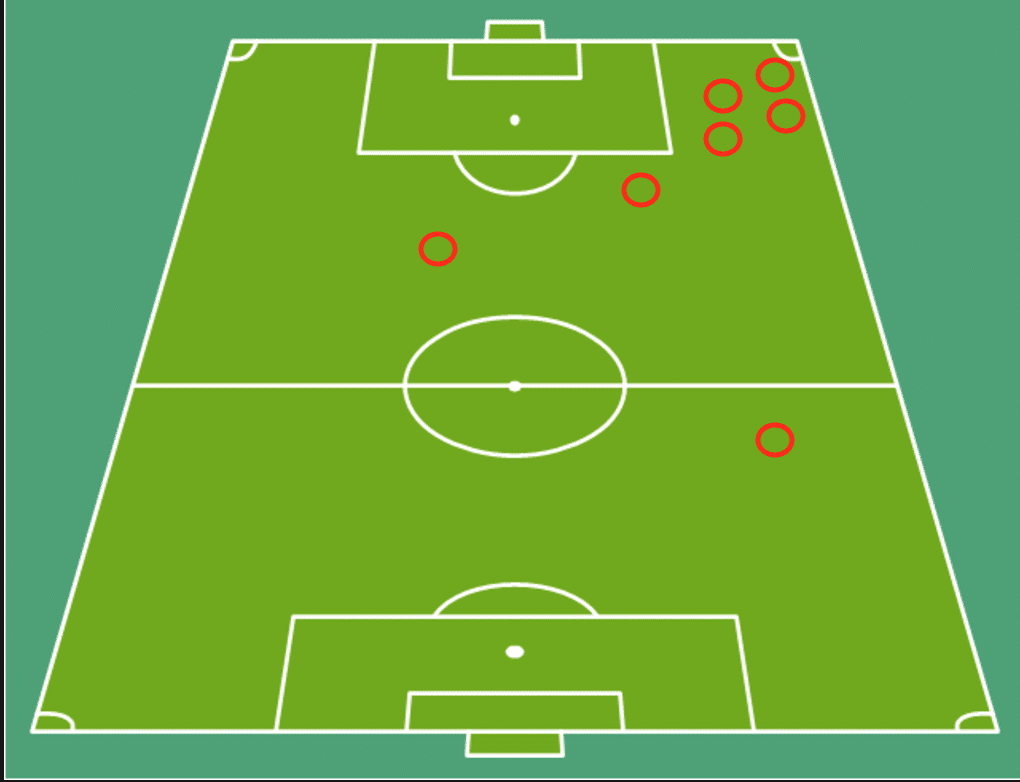 The graphic above shows the areas in which Oxlade-Chamberlain was credited with an assist. While playing as a wing-back he got into dangerous areas. His combination play in and around the penalty area coupled with his aggressiveness on the ball is something that can be replicated and counted on no matter where he's starting.

The Reds had issues getting beyond the 18-yard line during the 2016/17 season and really stretching the opposition which resulted in them playing football in front of them. It was easy for those arriving at Anfield to dictate the space. There was a feeling that Liverpool lacked penetration without Mané in the starting XI.

With the arrivals of Mohamed Salah and Oxlade-Chamberlain the Reds are no longer reliant on Mané for pace in the final third and this changes things for Klopp and his team.

People may get too hung up on him starting in a midfield but it's less about positions these days and more to do with what that individual brings to the system the manager wants to use. Only then do you see why and how Oxlade-Chamberlain could be an important squad player for the Reds, especially if Klopp can harness his ability.

Jordan Henderson was vocal about this during an interview following on from the announcement: “Well, I think, you’d have seen him [Klopp] on the sidelines, he’s very passionate. What you see is a fantastic manager and I think he will help Alex a lot. He will help him develop as a player and hopefully you will see even more good things from him.”

The captain added: “I think he can do both very well, he’s a fantastic player, he can adapt to each position, gives you something different on the wing.

“He’s very direct and powerful and in the midfield he’s clever enough to get on the ball and get on the half turn so, for me, he can play in either position.”

Oxlade-Chamberlain wasn't the deadline day signing many had wanted but he opens up a number of possibilities for Liverpool moving forward and not in one particular position. Instead it will be about what he offers the system and he's only going to improve under the guidance of the former Borussia Dortmund manager.