If Gareth Southgate is indeed keeping a close eye on Will Hughes, the England manager will have been pleased with what he saw at Wembley Stadium on Monday night.

Hughes stood out for Watford, refusing to be intimidated by a formidable Tottenham Hotspur midfield anchored by Eric Dier and Mousa Dembélé. He offered flickers of quality and class in an otherwise unremarkable Hornets display.

Gary Neville's a fan, too. Speaking on Sky Sports' Monday Night Football, the pundit claimed that Southgate will certainly be considering Hughes for this summer's World Cup.

“He has the grounding in the game you’d like,” said Neville. “He’s got something about him and he’ll be on England’s radar.”

Hughes has never made a senior appearance for his country but Southgate knows the former Derby County wonderkid well from their time working together in the England under-21 set-up.

Now, after a debut season at Vicarage Road hampered, but not devastated, by injury, Hughes is being tipped as an outside-the-box option for the World Cup in Russia.

Making it will be difficult but even being in the conversation having appeared just 13 times this season is an indicator of the impression he's made.

Hughes' first taste of Premier League football came almost three months into the season but being brought in from the cold did not faze him. In just his second start, he scored and notched an assist in a 2-0 win over West Ham United.

He struck his second a week later in the 3-0 win at Newcastle United. Then, just as Hughes began to enjoy life in the Premier League, disaster struck. In the 56th minute of the 4-2 defeat to Manchester United, Hughes pulled up while chasing a pass from Kiko Femenía.

The midfielder dropped to the floor clutching his leg. He looked dispirited and understandably so – it was not the first time his progress has been interrupted by injury. In August 2015, just as he was being tipped for a Premier League move, Hughes suffered a serious knee injury while playing for Derby.

It kept him out for nearly eight months. Crestfallen, Hughes admitted he needed consoling from Derby midfielder George Thorne during his lowest ebb. Thorne could empathise with the youngster having come through the other side of his own cruciate knee ligament injury.

Having been made to exercise patience before sinking his teeth into the Premier League, the disappointment etched across Hughes' face in that defeat to United was clear to see.

Picking up where he left off

Hughes missed more than three months of action and, by the time he regained his fitness, much had changed at Vicarage Road.

Silva had been sacked as manager and replaced by Javi Gracia. The Portuguese coach had been a mentor to Hughes but it was time to move on, and move on he did.

Just 11 minutes into his return, as a second-half substitute against West Bromwich Albion, Hughes won the ball in midfield and released Troy Deeney, teeing up the striker for the winner.

It was a goal that encapsulated Hughes: tenacity, vision and craft. Celebrating with Deeney, it was a refreshing reminder to Watford supporters of what they had been missing with Hughes out of action.

After gradually making his way back to match fitness with substitute appearances against Arsenal and Liverpool, Hughes started his first league game for four months in the 2-2 draw with Bournemouth.

Again, he impressed, revelling in the advanced midfield role behind Deeney and between Feminía and Roberto Pereyra. Hughes had good reason to believe he had created another winner, displaying nimble footwork in the box before laying a pass off to Pereyra to make it 2-1. Jermain Defoe struck in stoppage-time, however, to snatch victory away from the Hornets.

Since then, it's been a bumpy road for Watford. They lost to Burnley and Huddersfield Town before being held to a scoreless draw by Crystal Palace. Defeat to Spurs means they have now gone seven games without a win.

Yet, despite the slide down the table, Hughes has been a bright spark – and his stats reflect as much.

He ranks inside the top ten for open play key passes per 90 from Premier League midfielders. With 1.77, he's above Christian Eriksen, David Silva, Kevin De Bruyne and Dele Alli in that category.

One of Hughes' finest qualities is his ability to drift into pockets of space. There is a subtlety to his movement, which makes him difficult to detect, and to stop. As a result, he averages 3.43 touches in the opposition's penalty box per 90. André Carrillo, with 3.45, is the only Watford midfielder with a higher average.

A lot of players can create chances but Hughes sees moves developing quicker and clearer than most. There was a particularly striking example of that against Spurs when Hughes executed a first-time back heel to open up their defence and play in Abdoulaye Doucouré.

Before Femenía even played the pass, Hughes spots Doucouré's run in behind Eriksen. 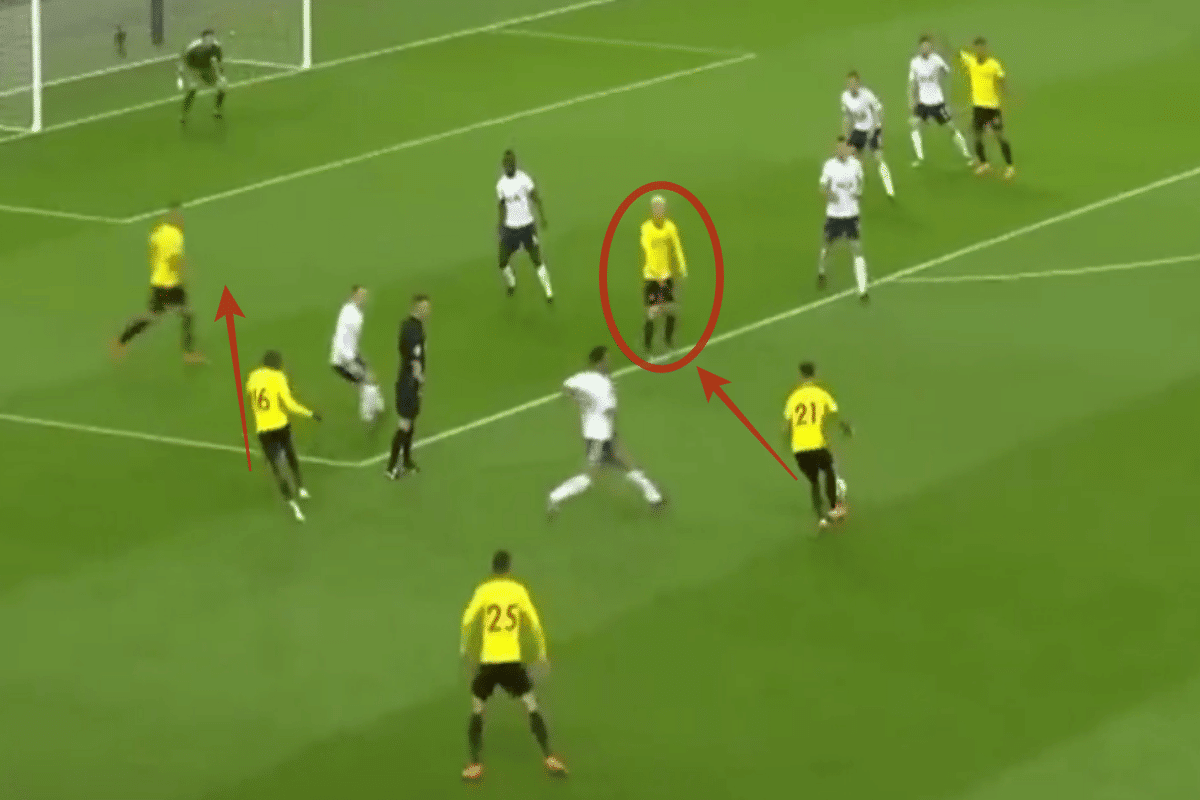 Eriksen, an attack-minded player, is naturally drawn to the ball, leaving Doucouré free.

Hughes executes a perfectly-weighted flick into the Frenchman to create a goalscoring opportunity. 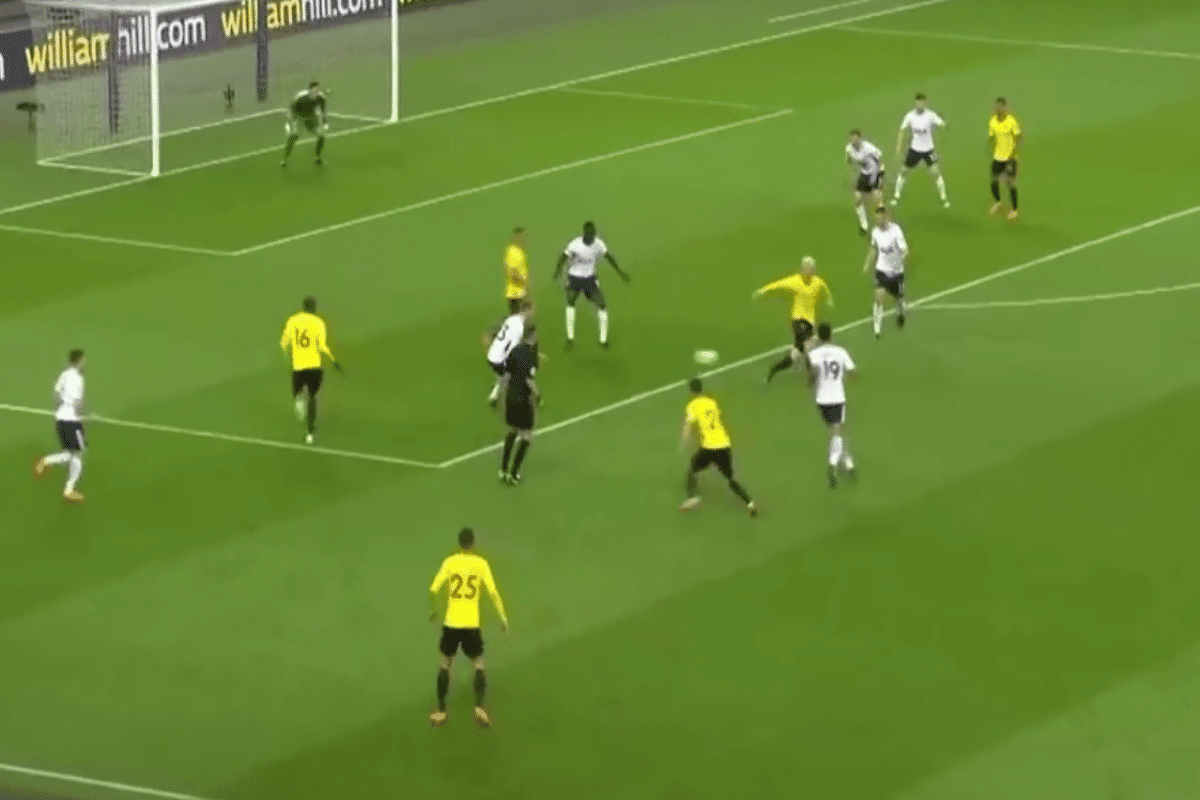 Unfortunately for the Hornets, Doucouré fails to get the ball out of his feet before the Spurs players swarm around him.

Hughes had made himself available in a promising position on the edge but Doucouré ignored the pass and shot straight at Hugo Lloris. 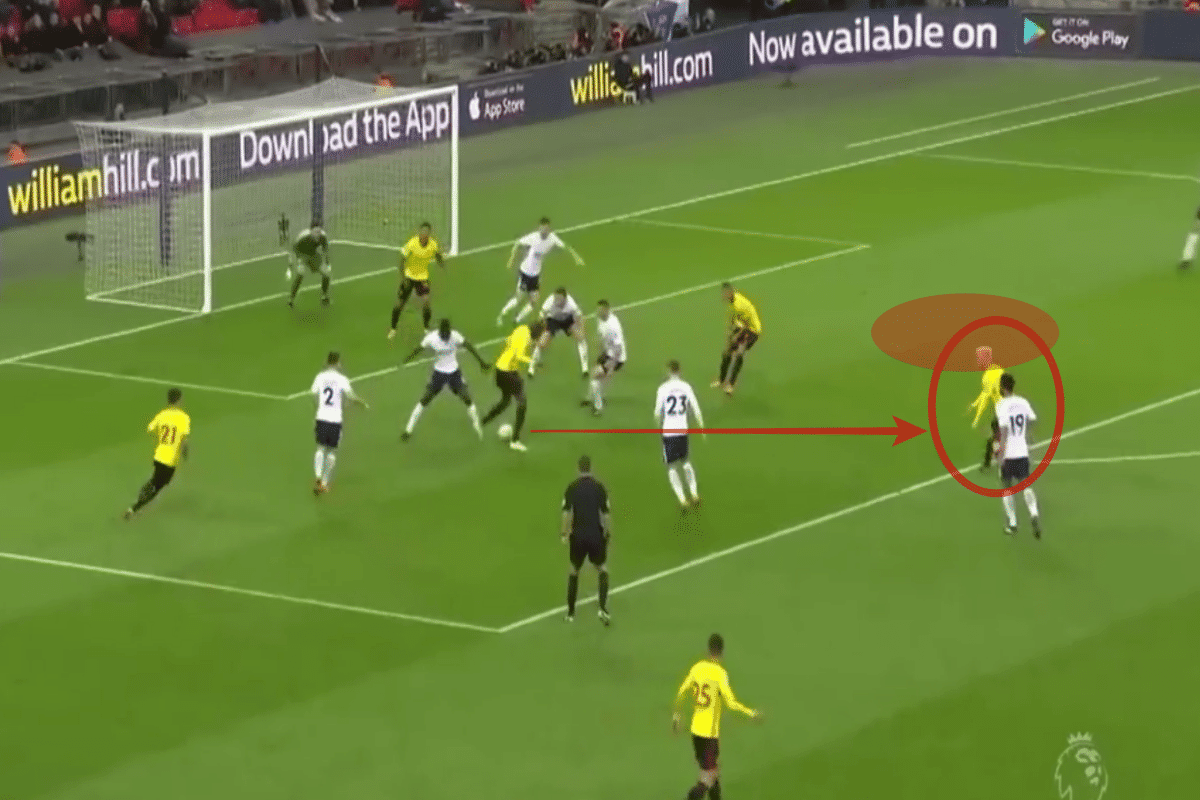 While it's important not to get carried away with one piece of skill, it did offer an exciting glimpse into how Hughes operates.

It also harked back to Hughes' finest moment, a wonderful backheel goal for Derby in the 2014 Championship play-off semi-final against Brighton & Hove Albion.

It was interesting, too, to read that Gracia likened Hughes to a Spanish player, presumably because of the midfielder's touch, vision and technique. While injured at Derby, Hughes learned Spanish as a way to broaden his horizons.

If anything it shows an intelligent young man willing to try new things. It also means that should a move to La Liga ever materialise, Hughes would not be entirely unprepared for a move to Spain.

Watford fans will be hoping that doesn't happen, though. Now that Hughes is fit and impressing for the Hornets once more, they are hoping that he can be this side's creative fulcrum in the years to come.

While reaching the England squad may be just out of his reach at this late stage, there is more than enough evidence to suggest he can become a regular fixture for his country in the years to come.