While most people’s attention was drawn to the Champions League quarter-finals at the King Power Stadium and Santiago Bernabeu on Tuesday night, there was another game of significance taking place in Manchester.

Chelsea and Manchester City played out a 1-1 draw in the first leg of their FA Youth Cup final at the latter’s Academy Stadium, which leaves the tie finely poised ahead of the second meeting between the two sides at Stamford Bridge next Wednesday.

Chelsea may have come out on top in the last two seasons, winning 5-2 on aggregate in 2015 ago and 4-2 over two legs last term, but Lee Carsley’s men are confident of getting their hands on the trophy this time around.

It is hard not to be impressed by Chelsea’s record in the tournament since the turn of the decade but their success in the Youth Cup also serves to shine a brighter light on the club’s failure to integrate its academy graduates into the first team.

Despite their achievements at under-18 level, the west Londoners have not had a youth product in their starting XI on a regular basis since John Terry broke into the senior squad in 1999.

Ola Aina, Ruben Loftus-Cheek and Nathaniel Chalobah have appeared for Antonio Conte’s side this term, yet recent history suggests that an extended spell in the line-up is unlikely.

After all, the likes of Josh McEachran, Jeffrey Bruma and Gaël Kakuta were also tipped as future Chelsea stars, yet all three players are now plying their trade away from Stamford Bridge on a permanent basis.

It will be intriguing to see if City are able to integrate their academy products into the first team in the next few years.

The club’s hierarchy certainly seem desperate to do so. Huge sums have been spent on improving the facilities and infrastructure at youth level – the City Football Academy cost £150m to build – while the team’s style of play and tactics are based upon that of the senior side.

The appointment of Pep Guardiola as manager last summer was another demonstration of the club’s desire to strengthen the link between the academy and first team.

Guardiola himself played 366 times for Barcelona after progressing from the club’s fabled La Masia youth ranks. He also spent a year in charge of the Catalan's B side before taking charge of the senior squad in 2008.

As well as a proactive and possession-based style of play, Guardiola is associated with giving young players a chance.

It is interesting, though, to dig a little deeper and find out just how successful he has been in this regard.

Guardiola’s first season at the helm of Barcelona brought the club’s first ever treble – it was, in fact, the first time any Spanish side had won La Liga, the Copa del Rey and the Champions League in a single campaign.

However, he did give opportunities to a number of younger stars too with Sergio Busquets and Pedro the best examples. 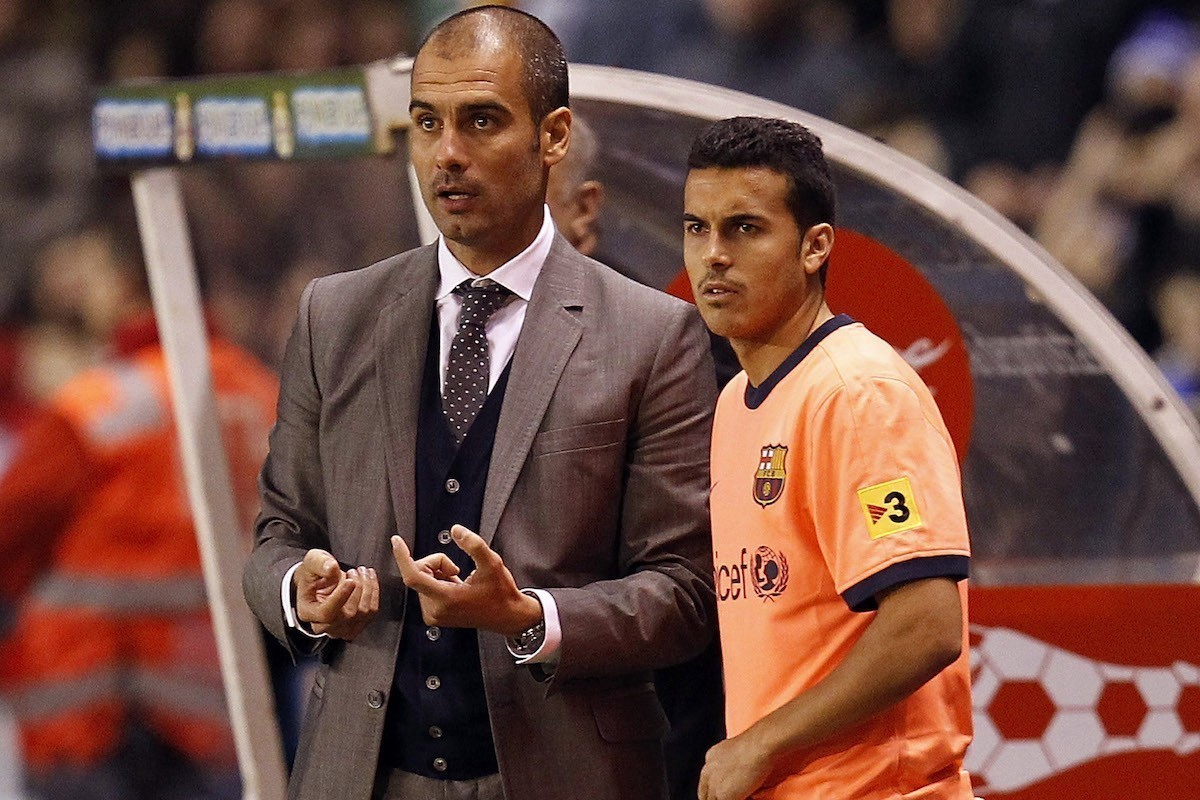 The former was handed his league debut by Guardiola, who included the then-20-year-old in his starting XI on 16 occasions in the Spanish top flight.

Bojan Krkic was also involved under Guardiola and there were fleeting chances for Jeffren, Alberto Botia,

There were a few more new names the following season, but none of Sergi Gomez, Gai Assulin, Marc Barta, Andreu Fontas or

It was a similar story for Gerard Deulofeu, Rafinha and Marti Riverola in Guardiola’s final season, but Cristian Tello featured 22 times in all competitions and Isaac Cuenca made 30 appearances. Thiago also started 20 matches in La Liga.

It must be remembered in all this that Guardiola’s Barcelona were arguably the greatest club side of all time. It would have been difficult for any player to break into the team at that stage, let alone an academy product with very little experience of professional football.

The fact that Pedro and Busquets became essential members of a group that won the Champions League twice in three years should be seen as a major positive from Guardiola’s point of view.

The occasional appearances he handed to dozens of others demonstrates he was always looking to bring more youngsters into the senior squad.

After a year’s sabbatical, Guardiola joined Bayern Munich ahead of the 2013/14 campaign.

But Yili Sallahi and Julian Green were given their debuts by the former Barca boss and Pierre-Emile Hojbjerg became a more important part of the group. 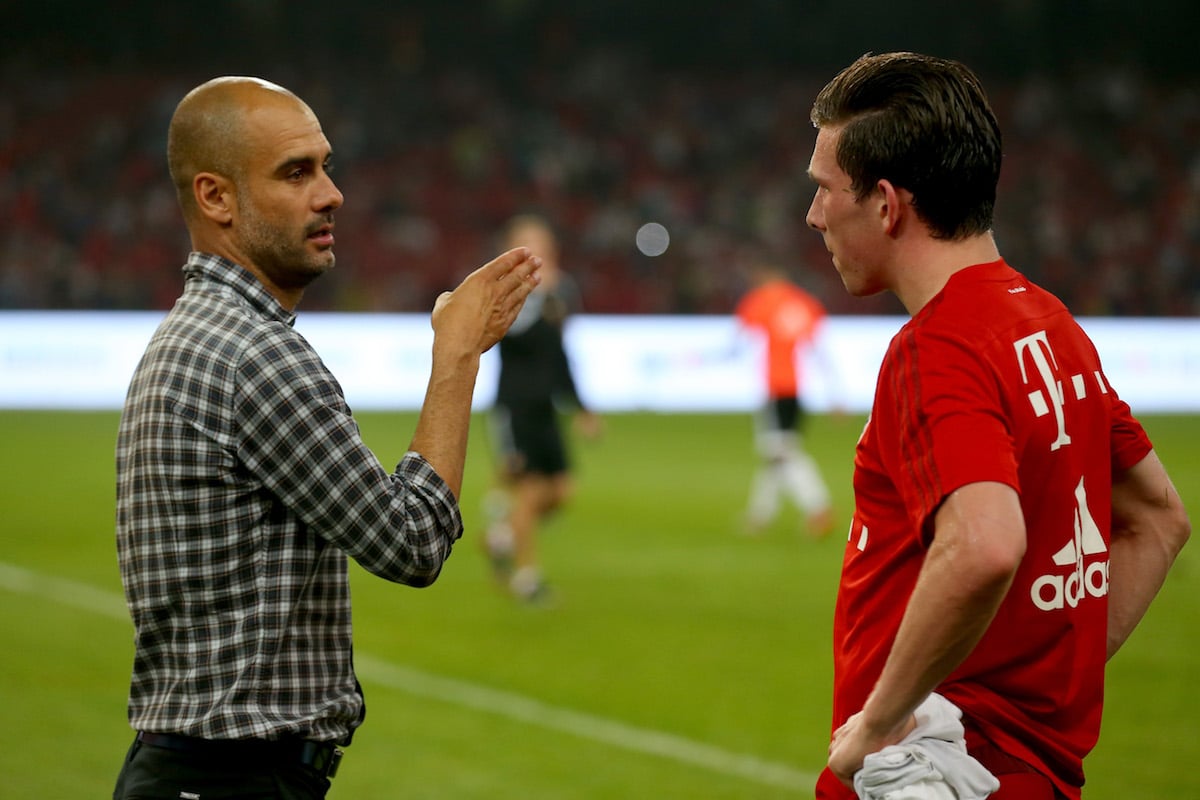 Over the next two seasons, as Bayern won three Bundesliga titles but failed to add another Champions League trophy to their cabinet, Milos Pantovic, Sinan Kurt, Ivan Lucic, Gianluca Gaudino and Phillipp Steinhart were given opportunities to catch the eye.

However, none managed to establish themselves in the manner of Thiago, Busquets or Pedro.

Guardiola’s record to date, then, suggests that Manchester City could go either way. The 46-year-old used youth players on a regular basis at Barcelona but tended to focus on more senior professionals during his three seasons at the Allianz Arena.

This could easily be down to the quality of Bayern’s production line during his tenure, a point which is strengthened when you consider where Sallahi, Hojbjerg, Pantovic, Steinhart and Lucic are currently playing their football.

City have high hopes for their current crop of young players and it will be fascinating to see whether the likes of Jadon Sancho, Brahim Diaz, Phil Foden, Aleix Garcia, Tosin Adarabioyo and