At the beginning of the season, Spurs showed no signs of any hangover after last years disappointing collapse in the final few weeks. Mauricio Pochettino’s men went 12 games unbeaten in the Premier League and managed to pick up respectable draws against Everton, Liverpool and Arsenal as well as beating Manchester City 2-0.

Everything seemed set for the team to prove last season was no fluke. But draws in the domestic league coupled with defeats in Europe and the League Cup meant, at one stage, Spurs were seven games without a win. 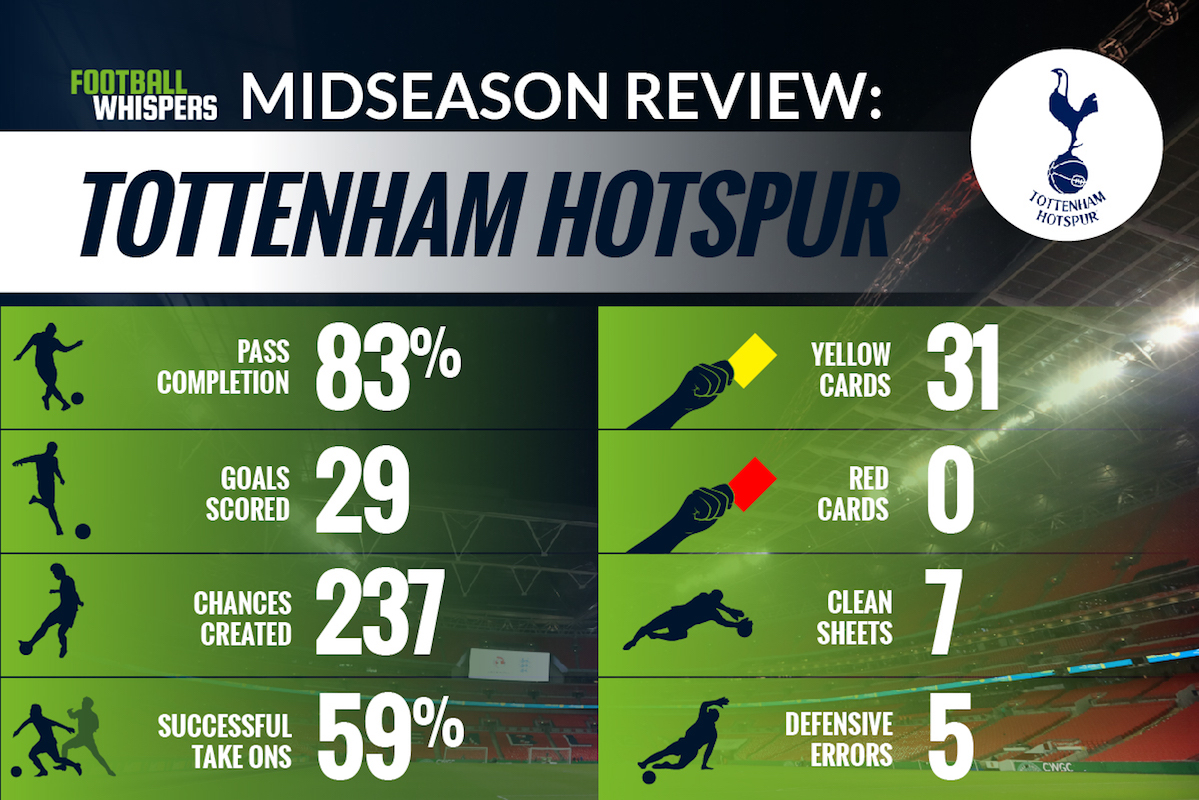 Their record over the last 10 games in all competitions stands at five wins, four losses and a single draw. Their form has seen them knocked out of the Champions League as well as the EFL Cup. However, despite the disappointing performances in Europe’s elite competition they are still in the Europa League and are currently just a point off of fourth placed Arsenal.

Depending on whether you are a half glass full or half glass empty kind of person will impact how you view Spurs’ season to date.

There has been a lot of talk surrounding how the team failed to strengthen in the summer. Vincent Janssen, Victor Wanyama, Moussa Sissoko and Georges-Kevin Nkoudou were the noticeable arrivals but for a team looking to compete both domestically and abroad was that ever going to be enough?

Spurs toiled in the absence of the injured Harry Kane. Lack of goals from the team was a common complaint with many pointing the finger at the supporting players failure to chip in. In the 10 games Kane was absent, Spurs scored just the 13 goals, with five of those coming in a Cup match against Gillingham. In the nine games since his return Spurs have scored 19 goals, a marked improvement but they’re still lacking that firepower. The top four teams in the league have all scored 35 or more goals whereas Spurs are yet to hit 30. It’s definitely an area of the team they could improve.

This is where Wilfried Zaha comes in. Spurs are long-term admirers of the former Manchester United attacker and failed with a £15 million bid in the summer. Links have resurfaced with many outlets claiming Daniel Levy is prepared to pay as much as £25 million for a player who has publicly said he wants to play European football.

The Crystal Palace winger has impressed even though the team is struggling in 17th position. He has three goals and six assists to his name. On his day he’s absolutely devastating and this season the 23-year-old is having more good games than bad ones. In his locker he has explosive pace, and his acceleration is electric. He can beat players both on the outside as well as on the inside, he’s direct, he’s positive and he has a final ball. He’s everything the modern day defender has come to hate.

There are, of course, alternatives. Spurs have been linked to Galatasaray’s Bruma, Schalke’s Max Meyer and Manchester United’s Memphis Depay. They could also turn their attentions to Monaco’s Allan Saint Maximin, doing well on loan at SC Bastia, Lazio’s Felipe Anderson or Hoffenheim’s Kerem Demirbay who all have overlapping traits. They’re all positive on the ball, they’re all good dribblers and they’re all a goal threat. No transfer is a guaranteed success but if Spurs are willing to sanction a big money deal isn’t it better the devil you know?

Why Zaha is Ideal for Spurs 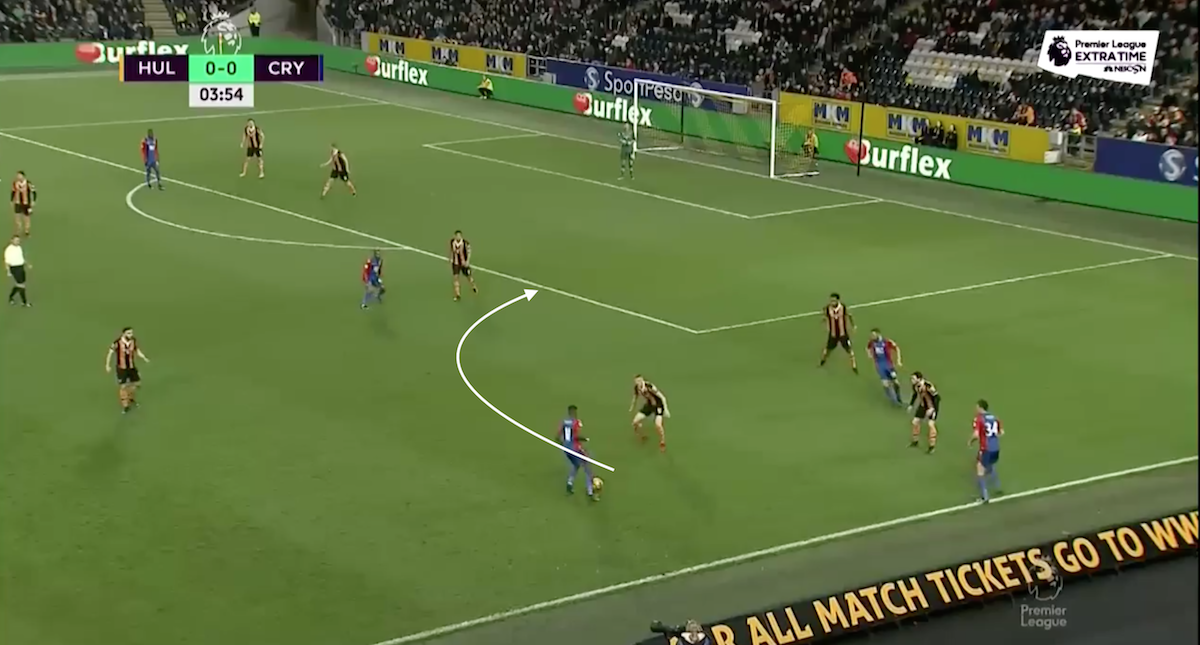 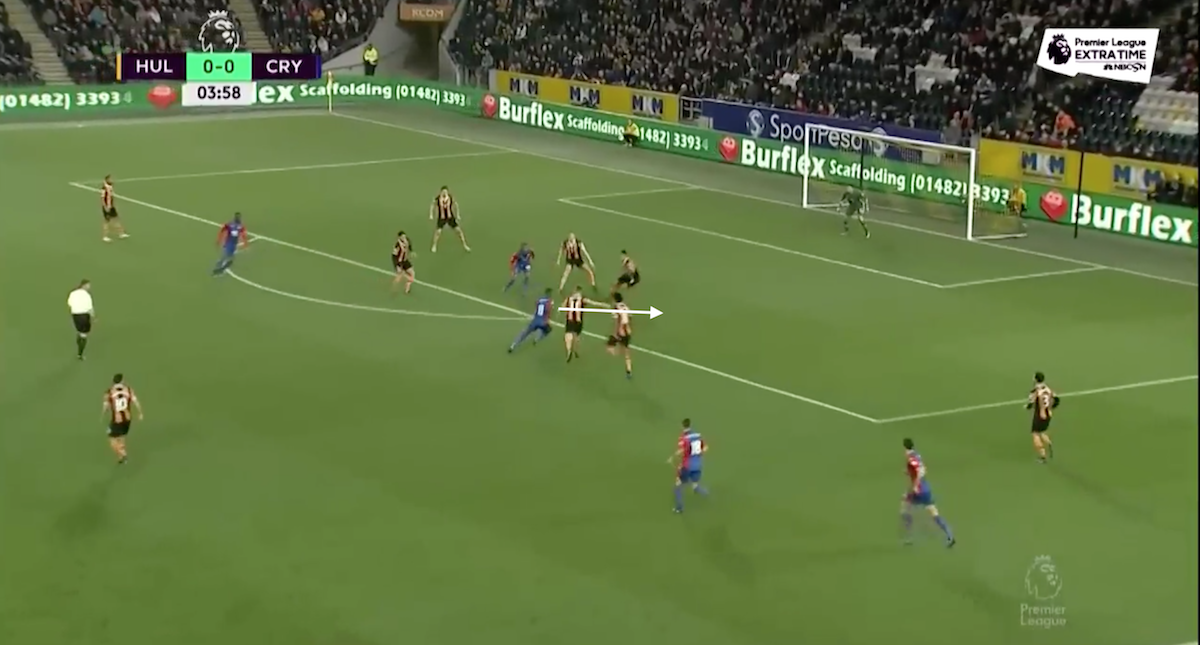 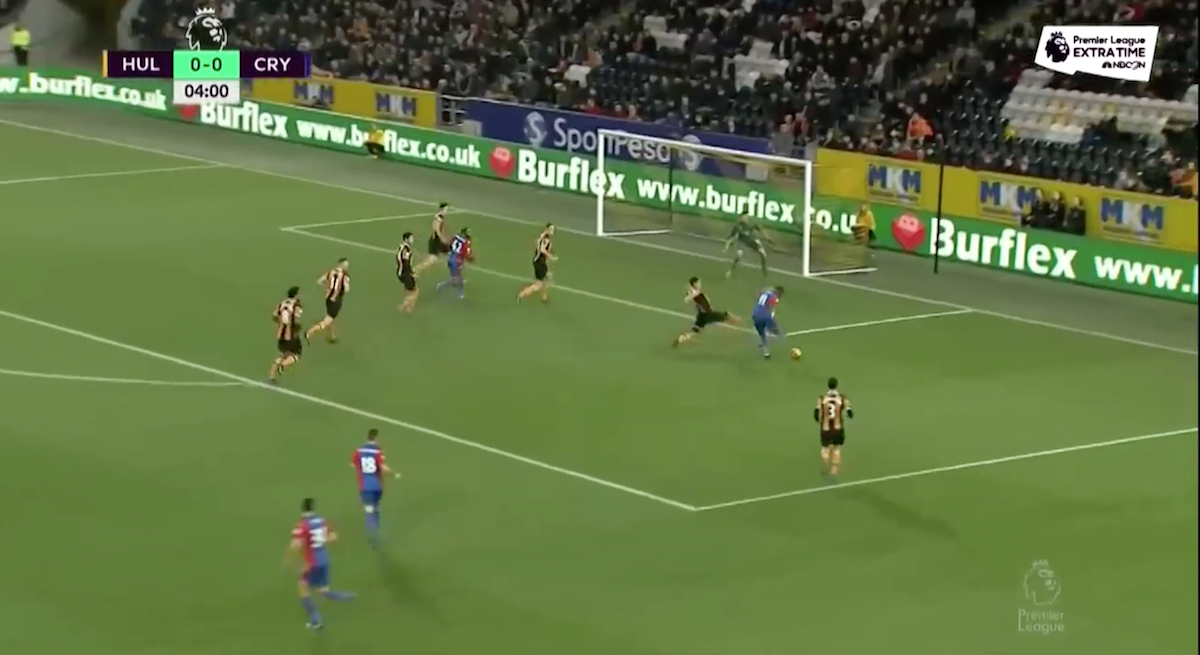 In the above three pictures, taken from Palace’s match against Hull, you get to Zaha in all of his glory. In the first picture, Zaha is in possession and the Hull man is looking to stand him up. The home side have seven players behind the ball and Robert Snodgrass is just about in line with Zaha. There’s no clear or easy pass on and Hull have the Palace right clogged up making it difficult for Zaha to go on the outside.

However, at the same time it’s 4 v 4 in that area of the pitch and there’s space to exploit. In the second picture you can see Zaha cut inside and his cross control enables him to slalom through the defence despite the fact he has four players chasing him. He ends up accelerating away and getting a shot off, which he drags wide. Teams sit deep against Spurs but having a player with Zaha’s pace and dribbling ability would certainly help them create chances against them.

According to whoscored.com only Neymar and Adama Traore complete more dribbles per 90 minutes than Wilifried Zaha. 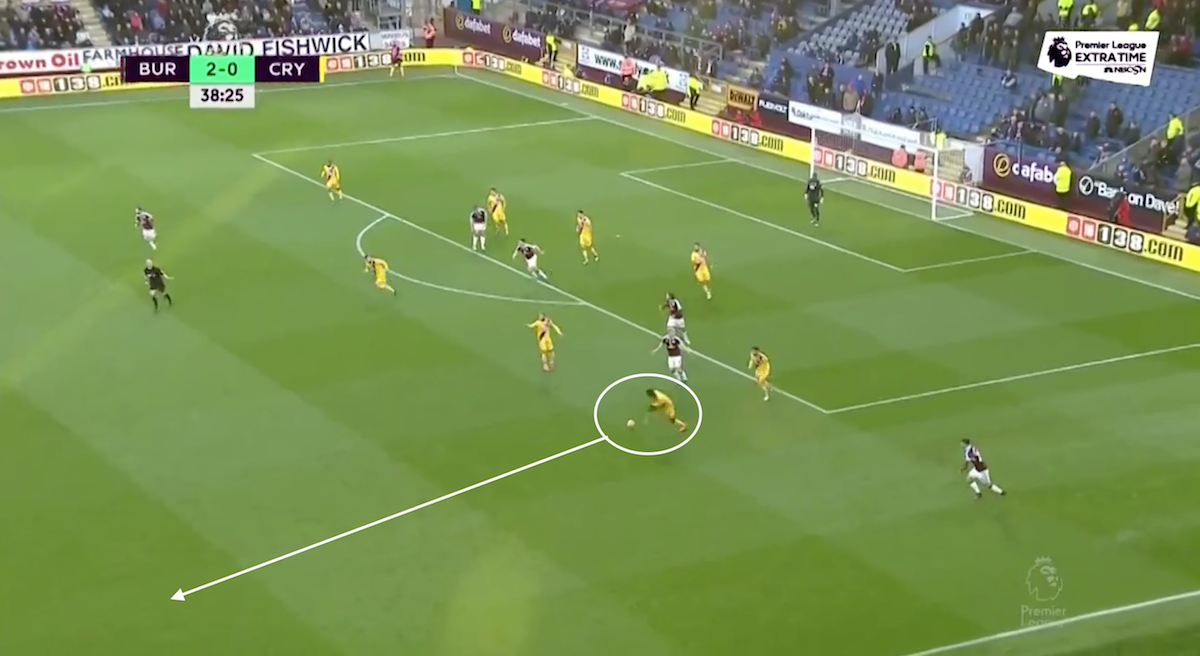 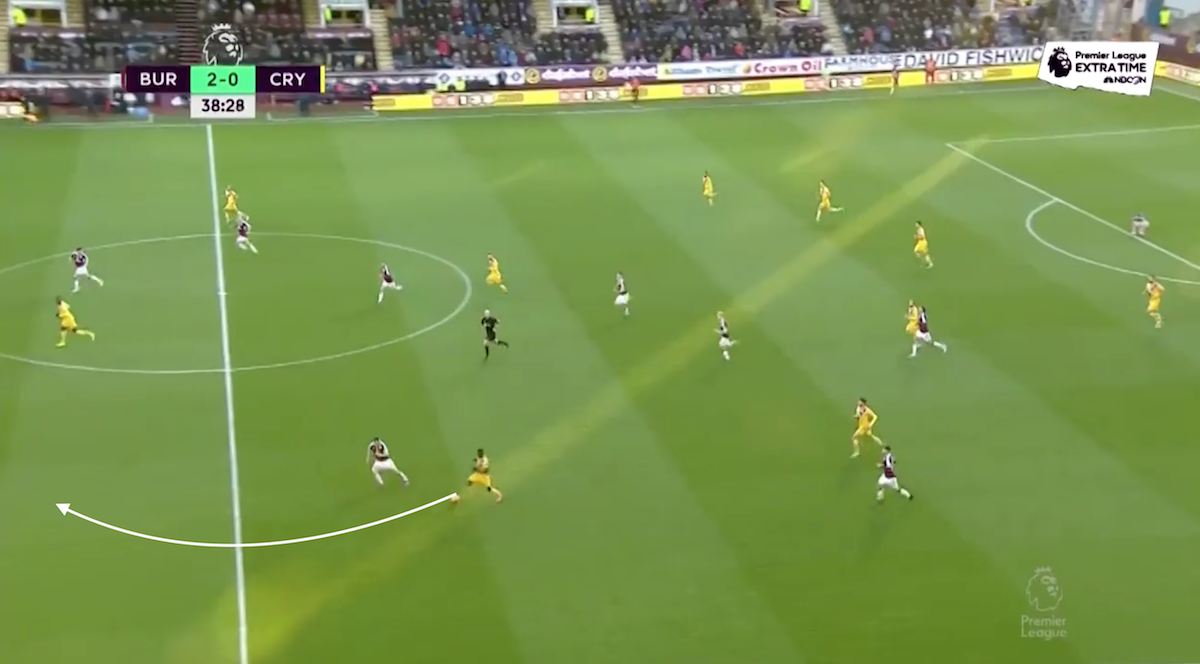 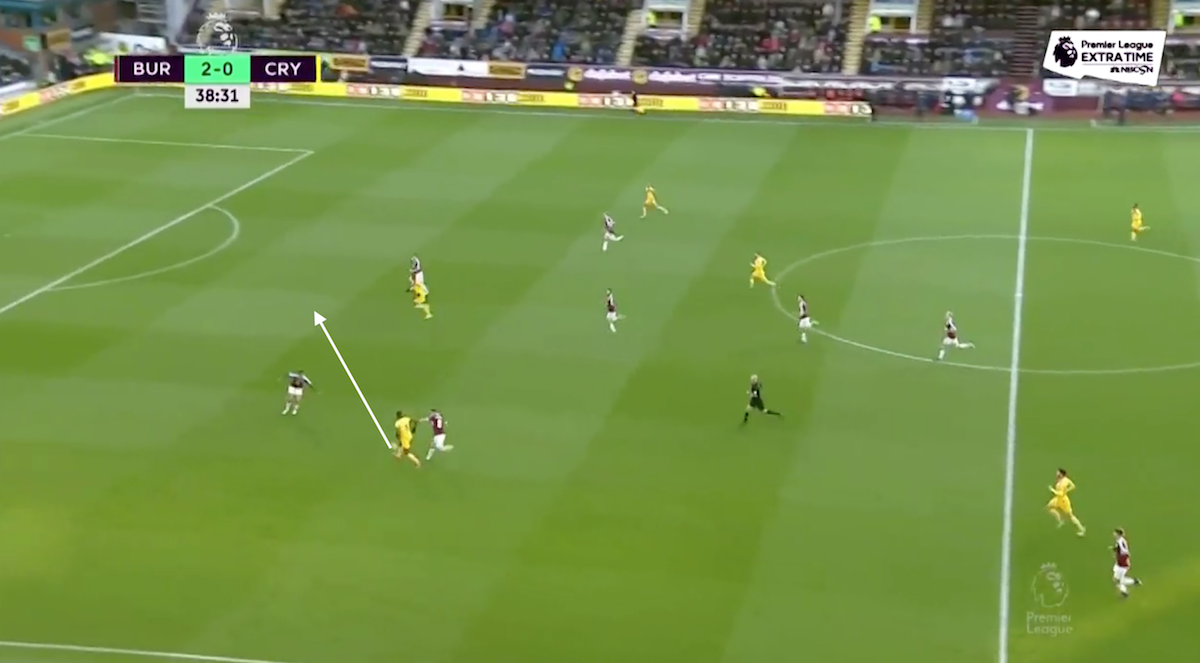 This time you get to see Zaha’s acceleration and pace. He picks the ball up on the edge of his own area and just attacks the space ahead of him. In this certain scenario many players would do the same. However, when Zaha reaches the Burnley man he’s not hesitant or cautious. Instead he just blitzes past him and manages to hold him off as he gets closer to the home sides goal.

Another Burnley player has to come across to stop Zaha having a clear run at goal. This opens up space which allows the forward to just thread the ball through to Benteke, who is now 1 vs 1 with the last Burnley player, after his team-mate's progressive work earlier. 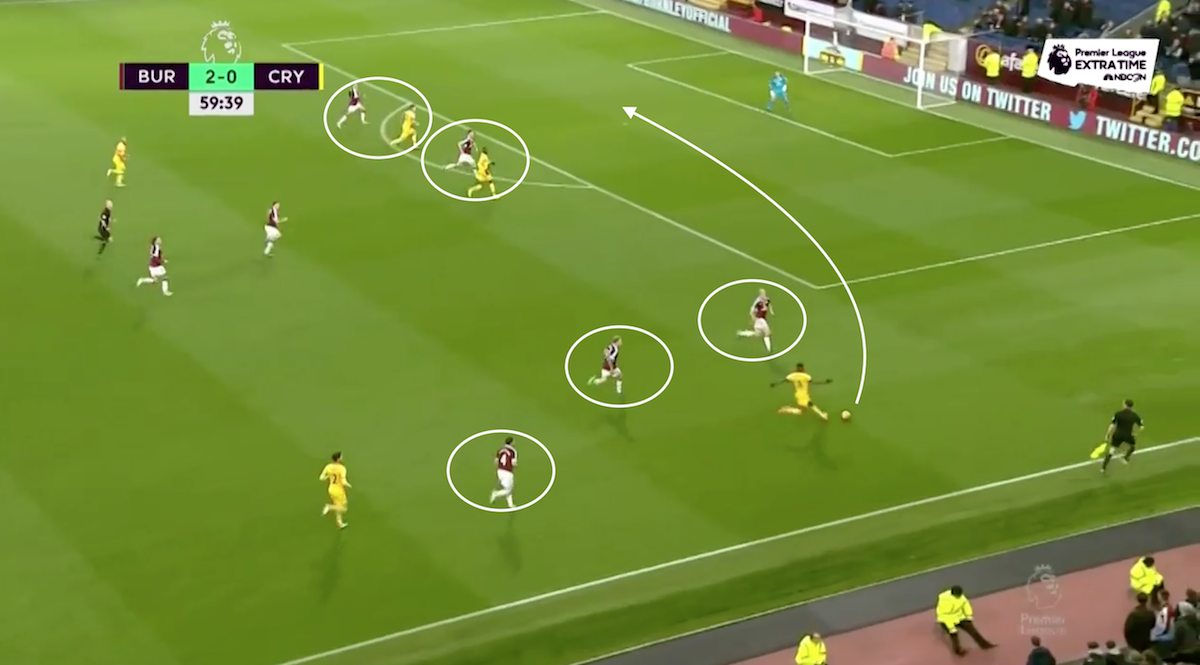 Again, the two picture above are from the match against Burnley. The home side are notorious for being stubborn, hard to break down and ridiculously organised. As Zaha picks the ball up in the first picture Dyche’s men have six men behind the ball with three retreating.

The 24-year-old is one on one with the left-back with acres of space to attack in behind. He knocks it around the Burnley player and races after the ball with a midfielder chasing him. The left sided centre-back comes over to try to stop the attack but Zaha has the quality to hit the ball in early, also showing he has a brain and doesn’t just look to take players on when it’s not necessary.

The former United winger takes out three Burnley players and it leaves Palace 2 vs 2 in a central area. From looking comfortable to looking extremely stretched in a matter of seconds. His cross was smashed home.

Spurs have Erik Lamela, Heung Min Son, Moussa Sissoko, Christian Eriksen and Georges-Kevin Nkoudou (yes, he exists) to call on but none of them really offer what Zaha does.

All are good in their own right but they lack some that can commit defenders at pace. No Spurs player has been involved in more goals than Zaha this season and none of them complete as many dribbles as the Palace man – Dembele is closest with 3.4 per 90 minutes. In today’s market £30 million for a player capable of making a difference isn’t that much in the grand scheme of things.