Arsenal find themselves in a predicament. Without sales, their summer budget is limited. There are areas of the team that need improving, such as the defence, but the Gunners have their eyes firmly fixed on adding Wilfried Zaha to their ranks.

Their first offer of £40million for the Crystal Palace poster boy, made up of staggered payments, will be rejected, with the Eagles valuing their No.11 at closer to £80million.

With four years remaining on a deal he signed in August, Zaha’s escape from Selhurst Park won’t be easy. And Arsenal aren’t going to get him on the cheap, no matter how much Zaha’s brother looks to openly put pressure on Palace.

“Given all that Wilfried has given to Crystal Palace to help them remain a Premier League club, I hope Palace will be able to see their way to agreeing a deal with Arsenal that allows Wilfried to realise his dream of playing European football for the club he's supported since childhood.”

Roy Hodgson's men aren’t in need of a cash injection having just sold Aaron Wan-Bissaka for £50million. Yes, they are indebted to Zaha with him at times single-handedly keeping the Eagles in the top flight but at the end of the day they’re running a business.

The versatile forward penned a new, long-term deal less than 12 months ago and the club will have to be properly compensated to part ways with him. It’s as simple as that.

A messy divorce could force through a move, but Zaha’s legacy would be tarnished and Arsenal would have to pay more, in some capacity, for the inconvenience caused. It could happen, but is he really worth that much effort?

The 26-year-old is an exciting talent; there’s no getting away from the fact he makes things happen. He’s delivered in the Premier League on a regular basis, too. However, do the Gunners actually need him?

Obviously, there’s always a need for better players within a squad. But only if they fit.

Mesut Özil fell out of favour with Unai Emery last season primarily because he wasn’t suited to the style he wanted his team to play. While Zaha is a much better fit than the German playmaker, he’s going to be in direct competition with Pierre-Emerick Aubameyang for the left-winger-cum-forward hybrid role. 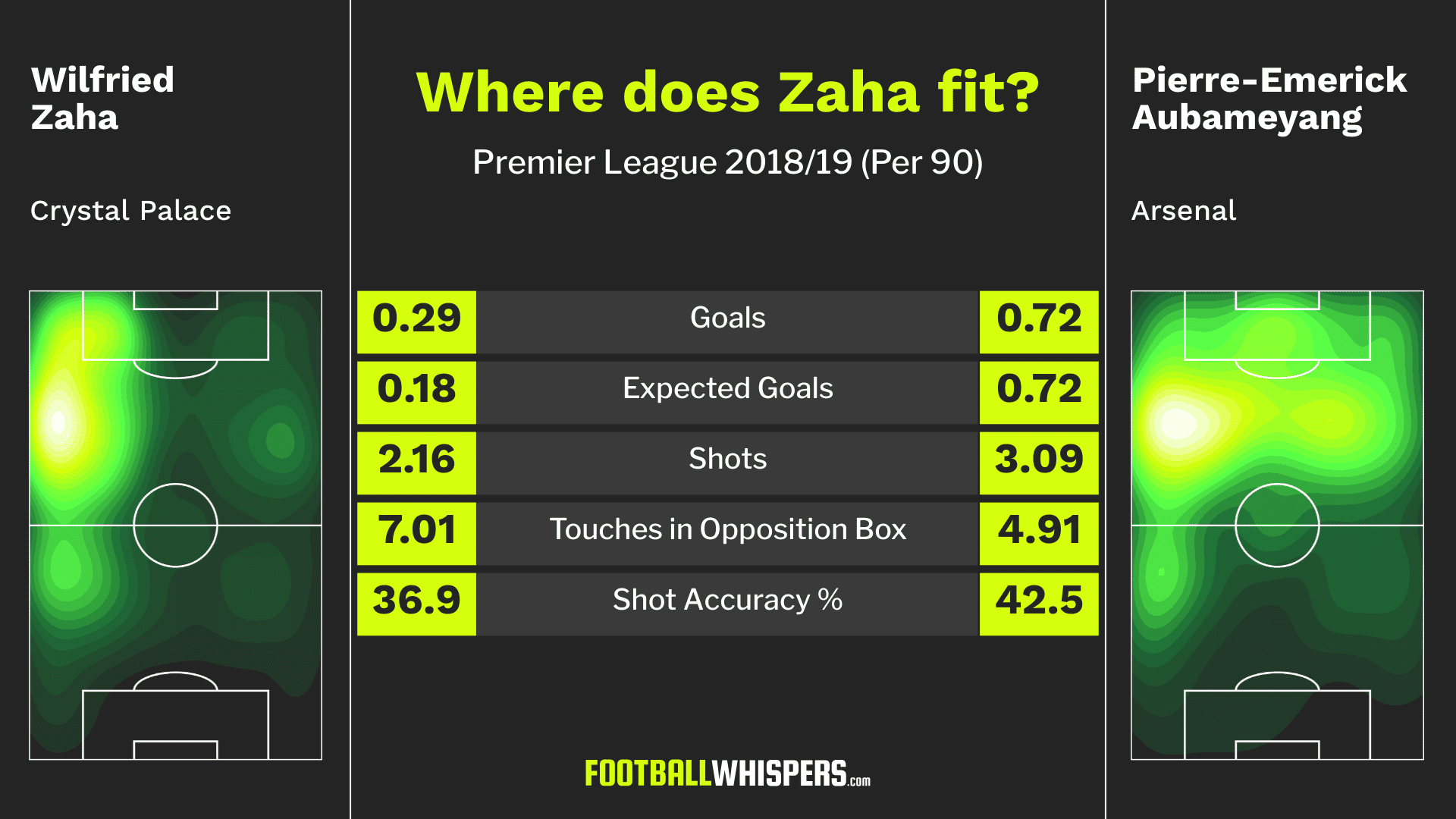 The quality of teammates needs to be taken into account but if Zaha and Aubameyang are being compared there’s only ever going to be one winner.

Despite the Crystal Palace man averaging more touches in the area, he’s less of a goal threat. He takes fewer shots, his expected goals average is dwarfed by the Arsenal No.14’s average and his output is significantly lower.

Their heatmaps show both players take up similar positions when in possession, picking the ball up in a wide area. The stark difference being Aubameyang drifts centrally a lot more. How does Emery fit them into the same starting XI?

The Spanish tactician tended to use a 4-2-3-1 shape last term and it’s difficult to see how Zaha, Aubameyang and Alexandre Lacazette all get a start. In fact, it’s tricky to see how he fits the trio into the same team without one of them sacrificing a part of their game. Then you head into unknown territory. If a style is tweaked, will they have as much of an impact? 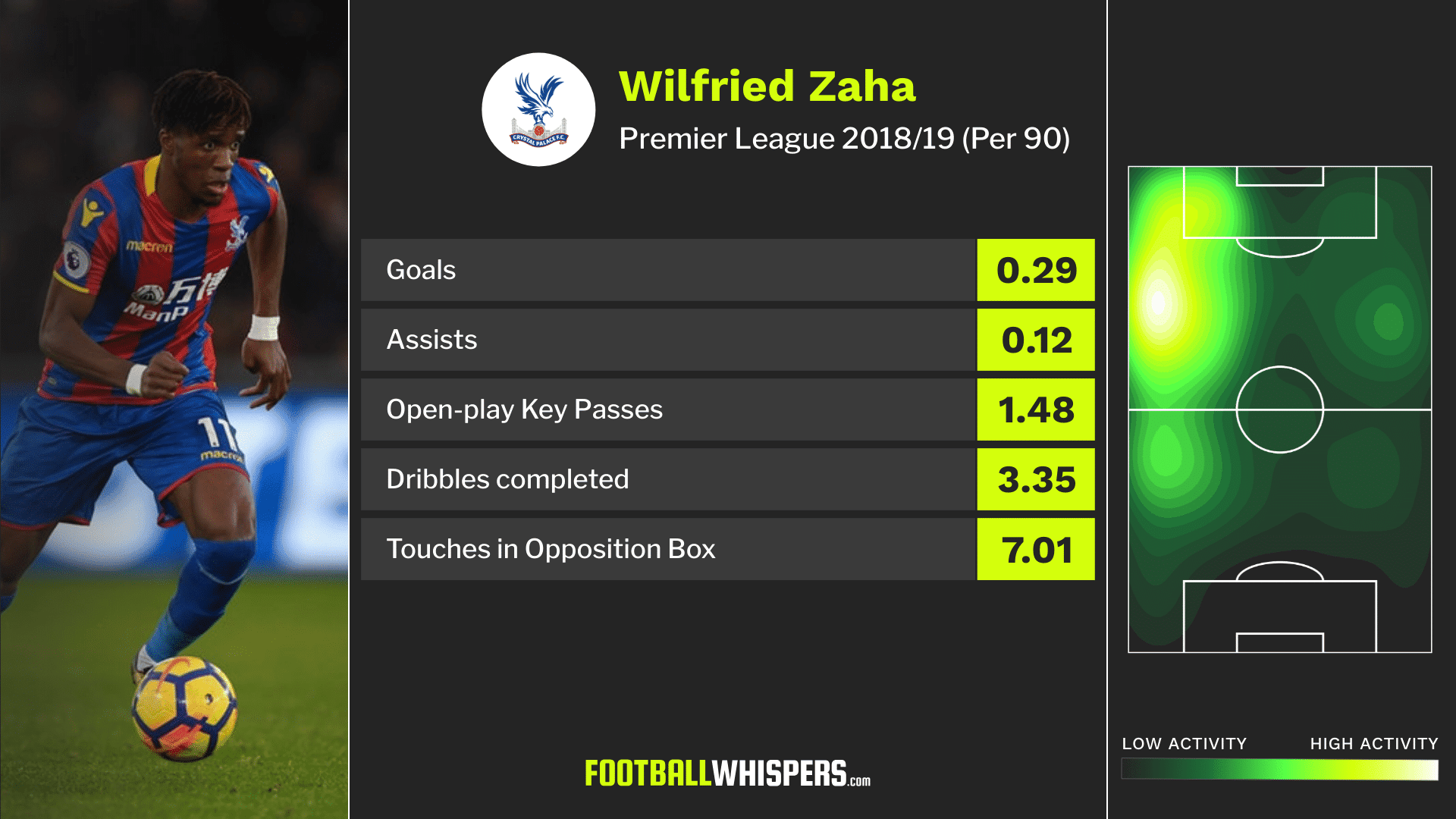 It's likely Zaha would have to change his style regardless of where he's deployed if he does make the move to the Emirates. The Gunners are a more possession-based outfit, averaging 56 per cent last term compared to Palace's 46 per cent.

Emery's men use the midfield to construct attacks with the forwards rarely involved. It means Zaha would see less of the ball at Arsenal despite them averaging more of it as a team. For context, Aubameyang averaged 20 fewer touches per 90 than the Palace attacker.

The former Manchester United man attempts 6.63 dribbles on a per 90 basis which equates to over a tenth of Aubameyang's touches in general.

If Zaha is seeing less of the ball, which is a real possibility, will he be as much of a menace? After all, he relies on volume. Cut down his attempted dribbles and you a different player entirely. Will he be as effective? Nobody truly knows.

But to push so hard for a player who doesn't necessarily fit in seems like a bad move for all parties.

If Arsenal want Zaha they need to redefine his game so he adapts to the team style. However, make him change and the Gunners will not have the same player, one who would've cost them big money.